Investors losing their appetite for ESG since Ukraine invasion: study

ESG-led investing has slipped since Russia invaded Ukraine, according to a sentiment survey by one of Europe's largest banks. Climate continues to be a priority for investors, but biodiversity is not.

The degree to which investors consider environmental, social and governance (ESG) factors in their decision-making has fallen since Russia’s invasion of Ukraine.

A global study of financial services executives by one of Europe’s largest banks, HSBC, conducted in June, finds that fewer investors think about ESG when investing than before the war broke out in March.

One-fifth of respondents said ESG analysis is incorporated into their investments “a lot”, while three-fifths said ESG is not a consideration — a proporton that has grown since HSBC’s last sentiment survey in February.

There was also a dip in the proportion of investors who feel that the incorporation of ESG analysis in investment decisions has grown over the past year, from 57 per cent in February to 50 per cent in June.

The waning appetite for sustainability-led investing has happened across all regions and asset classes, but was particularly pronounced in the United States and Europe.

We remain surprised that plastics and biodiversity receive such little support [from investors]. This is possibly due to a lack of clear investment options.

“We believe this is partly due to the significant shift in perception [of ESG investing] that has taken place since the start of the Russia-Ukraine war,” the report’s authors suggested.

The surge in fossil fuel stocks on the back of the Ukraine war backs up the findings of HSBC’s sentiment survey. The study also shows that just over half of respondents (51 per cent) believe that the level of ESG incorporation in investment decision-making will grow over the next 12 months. 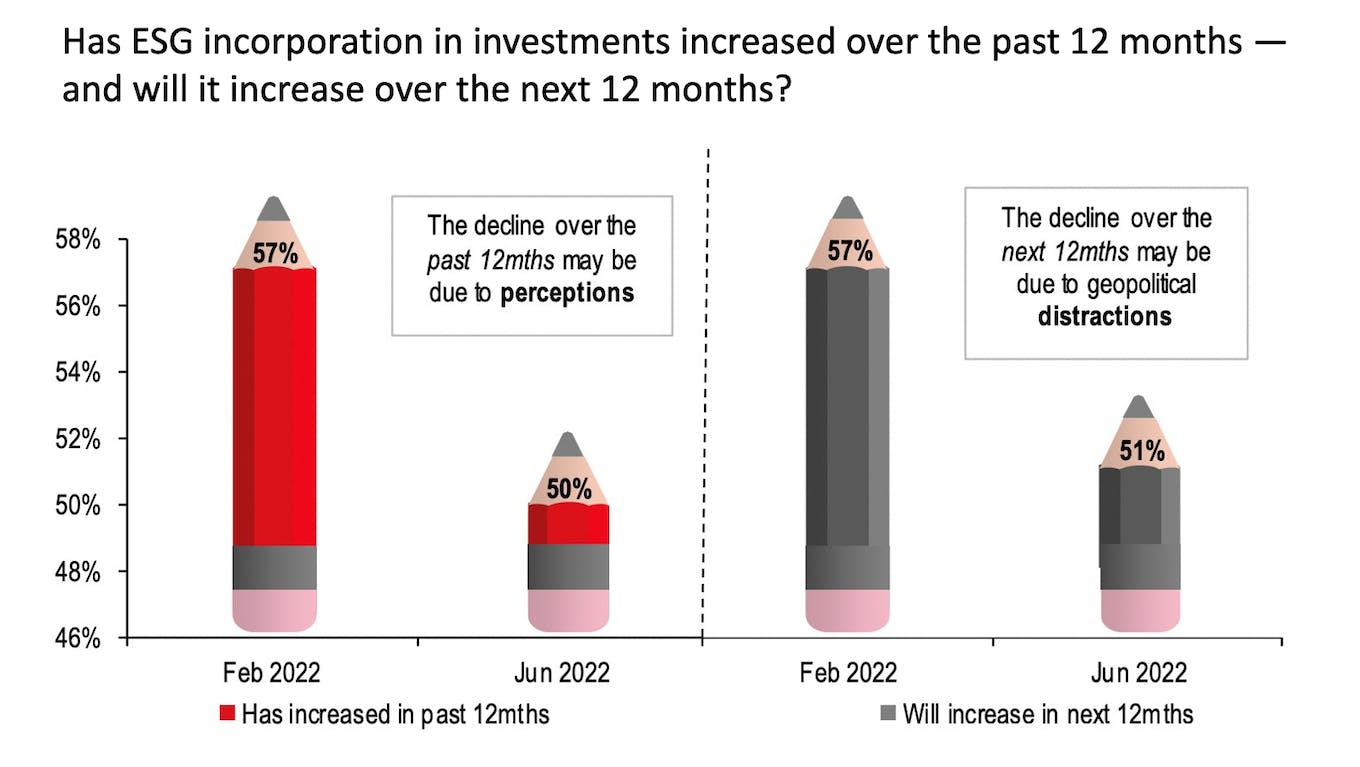 ESG-focused investments are projected to make up half of all professionally managed assets globally by 2024, up from less than a third in 2016. However, concerns over greenwashing and a paucity of good-quality ESG data have led to caution over green finance market prospects, and policymakers in Europe and the United States have that signalled regulation is coming to clamp down on falsely-labelled ESG products.

HSBC’s survey asked investors which environmental and social issues they will spend most time thinking about over the coming 12 months. Climate change and decarbonisation dominate the headspace of investors, and water-related issues are also a priority. But interest in biodiversity is low — despite growing media attention in the run-up to COP15 nature talks in December 2022.

“We remain surprised that plastics and biodiversity receive such little support. We think this is possibly due to a lack of clear investment options, with these issues instead potentially more ‘engagement related’ than ‘investment theme’ at this stage,” the report read. 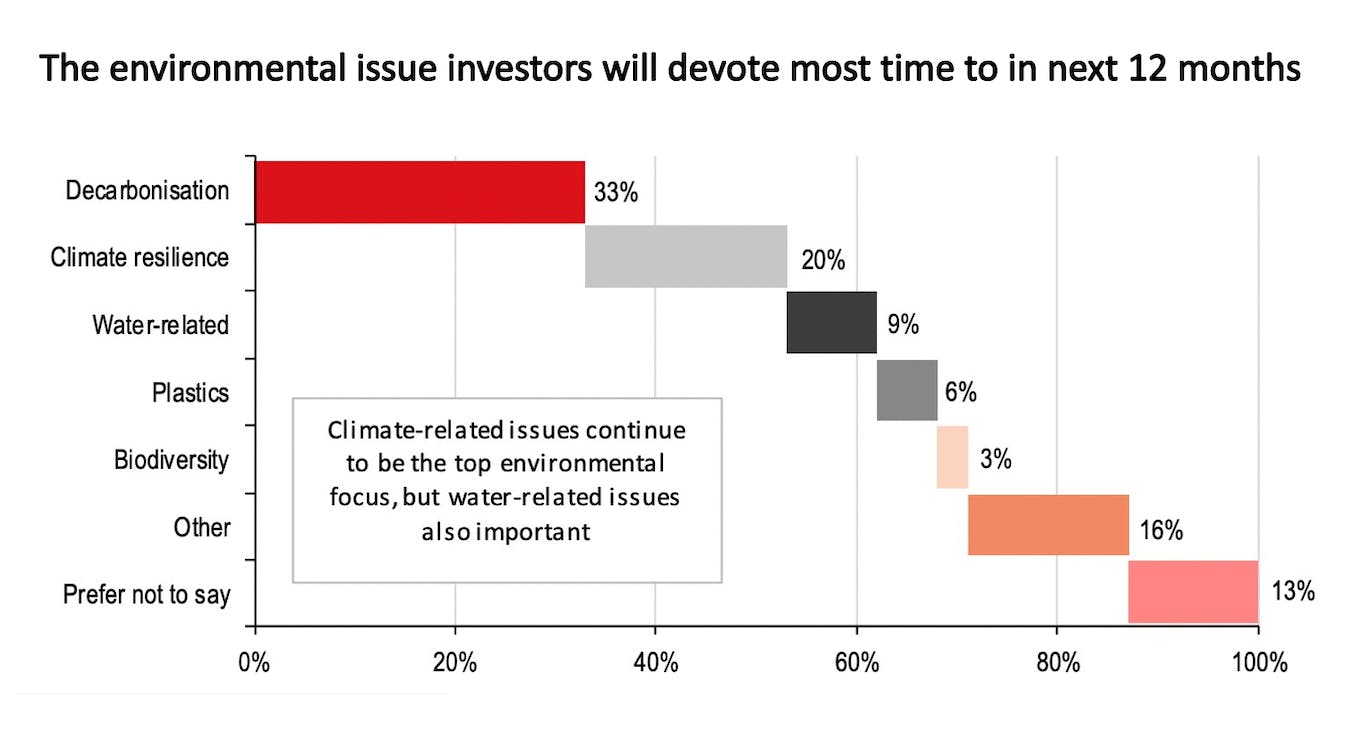 The environmental issue financial services workers say they will devote the most time to in the next 12 months. Source: HSBC ESG Sentiment Survey

Interest in social issues is more evenly distributed, but gender, diversity and inclusion are likely to get the most attention from investors over the coming year, HSBC’s study suggested. 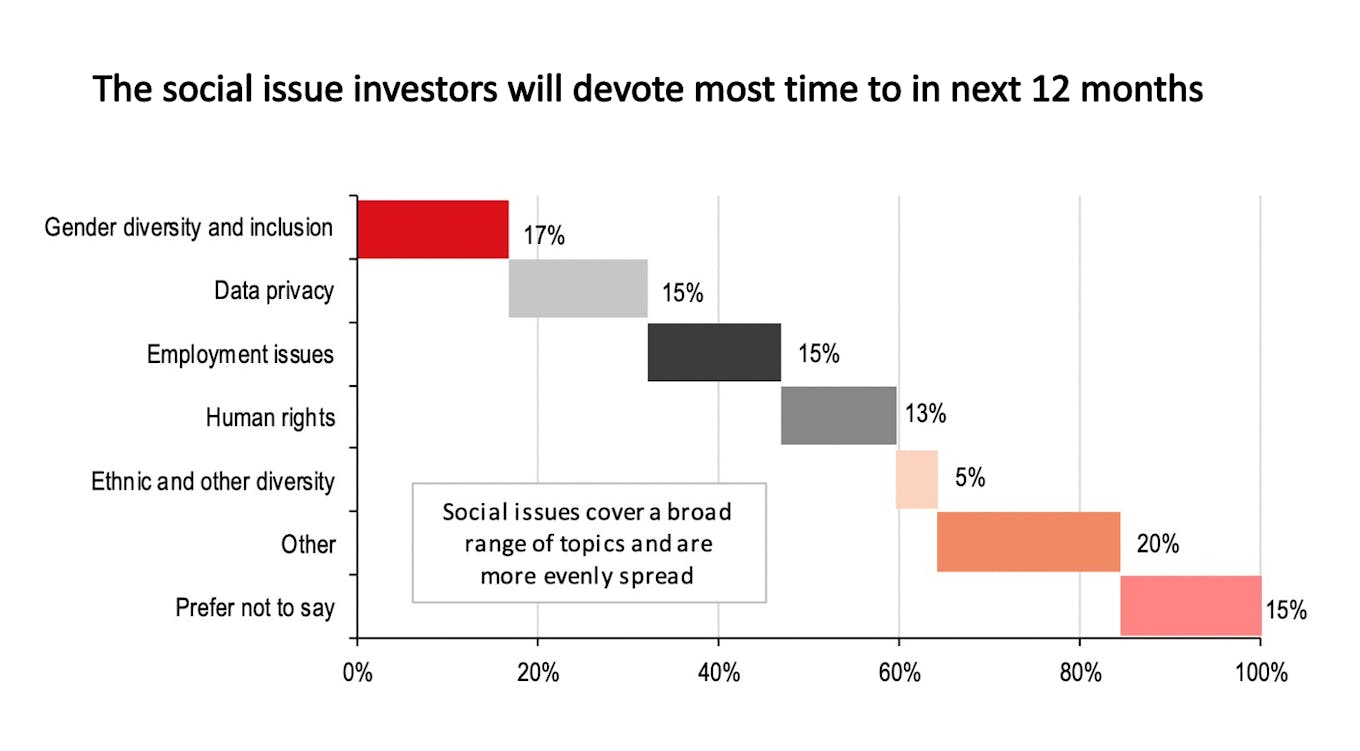 The social issue investors will devote most time to in next 12 months. Source: HSBC ESG Sentiment Survey​

By far the most important reason for funds to have an ESG strategy is to attract capital — a motive that has grown stronger since February — the study found. 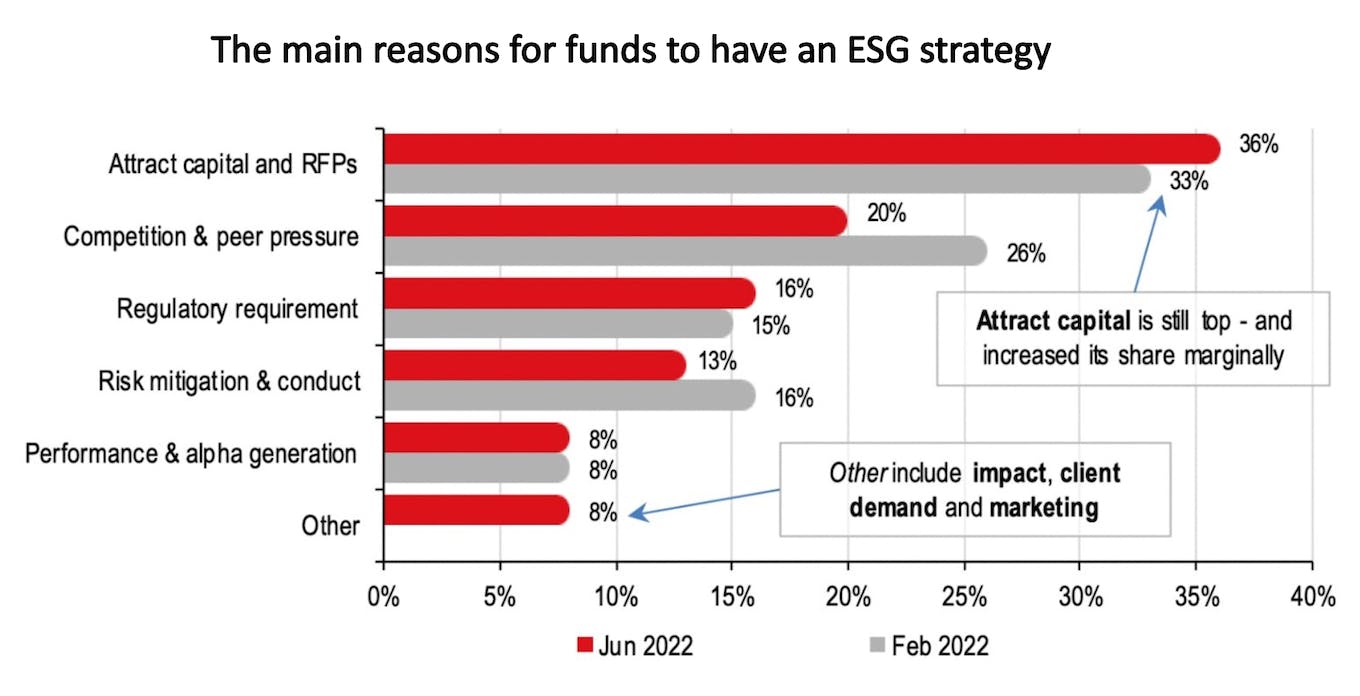 The main reasons for funds to have an ESG strategy. Source: HSBC ESG Sentiment Survey

Eco-Business asked HSBC where achieving positive impact — for instance tackle climate change or alleviate poverty — featured among the reasons for funds to have an ESG strategy.

“We added the ‘other’ choice this time and asked respondents to specify,” said Wai-Shin Chan, head, climate change centre, and head of ESG research at HSBC. “Impact was also there but it wasn’t something that stood out as a ‘must-have’ option.”