Intensified agriculture may be viewed as the solution to feed the 7.6 billion people in the planet today, but it is not.

In a study published in Nature Sustainability journal, which involved analysis of 60 case studies from countries in Africa, Asia and Latin America, researchers found that fewer than 20 per cent of cases of agricultural intensification had benefits across both ecosystem services and human wellbeing.

Agricultural intensification—activities that aim to increase either the productivity or profitability of agricultural land—tends to get high priority as a strategy for sustainable food production. But how positive outcomes can be achieved in different regions has been unclear, according to the authors.

This knowledge gap was their motivation to analyse the twin impacts of agricultural intensification in low- and middle-income countries.

The findings, published last month (14 June), are based on 53 peer-reviewed papers published from 1997 to 2017, with 15 of the 60 case studies focusing on African countries: Ethiopia, Madagascar, Niger, Nigeria, Rwanda, Senegal, Uganda and Zambia.

The researcher team analysed wellbeing using indicators such as income, education, health and food security. Ecosystem services were assessed with indicators including biodiversity, cultural heritage and water purification.
“Only 17 per cent of our cases were categorised as having overall win–win outcomes [for ecosystems and wellbeing],” the authors write in the journal.

In the case of biodiversity, whereas only 12 per cent of cases had positive outcomes, 45 per cent had negative outcomes. 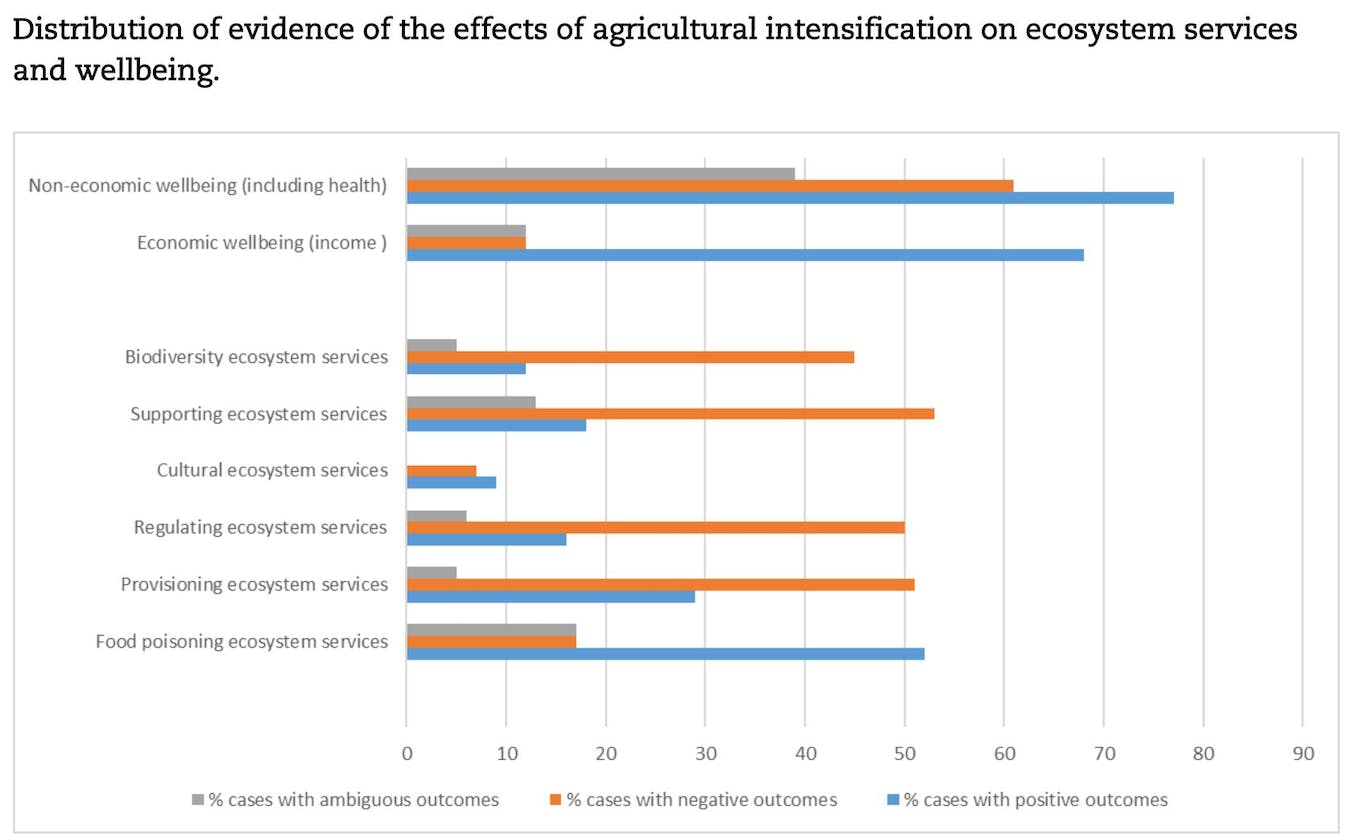 Image: Laura Vang Rasmussen and others.

According to Laura Vang Rasmussen, lead author of the study and a postdoctoral fellow at the Department of Forest and Conservation Sciences at the University of British Columbia in Canada, although agricultural intensification is often considered the backbone of food security, the reality is that it often undermines conditions for sustainability such as biodiversity, soil formation and water regulation that may be critical for supporting stable food production over the long term.

In Ethiopia, for example, intensified coffee production driven by investors and state enterprises contributes to declining access to, and availability of, ecosystem services—and this has negative impacts on the wellbeing of local minority groups who rely on these services for their livelihoods.

African countries need to look at how intensification is introduced—whether or not it is initiated by farmers themselves, according to Rasmussen. “Change is often induced or imposed for more vulnerable population groups who often lack sufficient money or security of land tenure to make these changes work,” she says. Rasmussen explains that smallholders in the cases studied often struggle to move from subsistence to commercial farming, and the challenges involved are not currently well reflected in many intensification strategies.

Phil Dobie, a senior fellow at Kenya-headquartered World Agroforestry Centre, believes the study is important in its aim to investigate how to successfully achieve sustainable intensification, which he says is a poorly defined term.

This piece was produced by SciDev.Net’s Sub-Saharan Africa English desk