Compressed biogas, or bio-CNG, is likely to play a crucial role in India's energy transition. But entrepreneurs say the business environment is dispiriting and approvals must be fast-tracked.

When India’s agrarian state of Punjab inaugurated a compressed biogas plant in October 2022, it sought to address one of the state’s biggest environmental problems: the nefarious practice of setting afire ­rice ­residue ­after ­harvest­, which smothers northern India in smog during the winter months.

About ­20 ­million ­tonnes of paddy straw is generated annually in Punjab, India’s third-biggest rice producing state, and much of it is set aflame because farmers have a very short window to clear the fields for sowing wheat crop for the winter. The state registered 16,004 counts of farm fire in October 2022.

India imports about 50 per cent of its compressed natural gas (CNG) needs, and the government wants to use bio-CNG to realise numerous benefits: reduce imports, utilise most of the biomass waste generated in the country, reduce carbon dioxide emissions as bio-CNG engines’ carbon emissions are 40 per cent lower than those of natural gas, provide a buffer against energy security concerns caused by global gas price fluctuations, and help India achieve its climate goals.

However, entrepreneurs from other states warn, the government must remove major roadblocks for this aspiration to be realised.

With a large farming population, India generates about 350 million tonnes of agricultural waste every year.

These millions of tonnes of farm waste – and similar organic waste from hotels and dairy farms – can be used as raw material to produce biogas.

The purified and compressed form of this biogas is known as bio-CNG, because it compares with the composition and energy potential of CNG, a fossil fuel primarily composed of methane. As a cleaner alternative to CNG – since it comes from waste, reduces net methane emissions from naturally decomposing farm waste, replaces the use of fossil fuels, and produces lesser particulate emissions on burning – it provides a cost-effective alternative to CNG that can be used in transport and industry.

The government’s Sustainable Alternative Towards Affordable Transportation (SATAT), launched in 2018, aims to help entrepreneurs set up plants to produce bio-CNG and supply it to oil marketing companies (OMCs), the large, conventional fuel suppliers. These OMCs will sell bio-CNG as an automotive and industrial fuel.

The initiative hasn’t taken off: against a total of 3,694 plants that were approved, only 38 have been commissioned so far. The targeted production and sale of 15 million tonnes of bio-CNG by 2023 has been overwhelmingly underachieved – only 9,019 tonnes have been sold.

High cost and lack of finance

The capital cost of setting up a bio-CNG plant varies with the raw material (called feedstock), technology and other factors.

In September 2020, the Reserve Bank of India (RBI), India’s central bank and banking regulator, mandated that banks would set aside funds to provide loans to bio-CNG plants by according them priority sector lending status. Yet, entrepreneurs find loans hard to come by.

“Banks are asking for 100 per cent collateral security, even though the RBI has directed them to give loans without collateral,” said S. Chinnappan of SLR Energy in the southern peninsular state of Tamil Nadu.

Chinnappan’s proposed feedstock was press mud and sugar mills gave written assurance of a steady supply of press mud. But a government-owned bank rejected his loan application, saying some other sugar mills had shut down operations and press mud supply would dwindle.

Given the high capital and operating costs, the Ministry of New and Renewable Energy (MNRE) offered a waste-to-energy subsidy until March 2021. Chinnappan had applied for the subsidy in 2019, but it didn’t come through. After a break, the subsidy was restarted in November 2022 and he expects to receive it in early 2023.

CBG prices have also been fixed much lower than fossil fuels’, said Sameer Rege of Mailhem Environment Pvt Ltd, a waste management company based in Pune in the western coastal state of Maharashtra, even though the calorific value of a kilogram (kg) of bio-CNG is almost equal to that of a litre of petrol. “Petrol costs Rs 110 (US$1.34) per litre. But bio-CNG costs Rs 54 per kg (US$0.66) as per SATAT policy,” he said. “Government should instead pay a premium on bio-CNG as it is renewable source unlike petrol.”

LPG (liquified petroleum gas), a fossil fuel, sells for Rs 115 per kg, whereas bio-CNG supplied to restaurants fetches Rs 80 (US$0.97) per kg, said D. Hari Babu of Haritham Innovative Technologies, a consultancy based in the southern state of Andhra Pradesh.

From local administrations to the public, lack of awareness about bio-CNG creates further problems for entrepreneurs.

Vishnunath of Maha Shank Energy LLP, which has a plant in Tamil Nadu, said he had to educate local villagers. “They had complained to the local administration mistakenly thinking that the plant’s dome was a nuclear reactor!” he said. 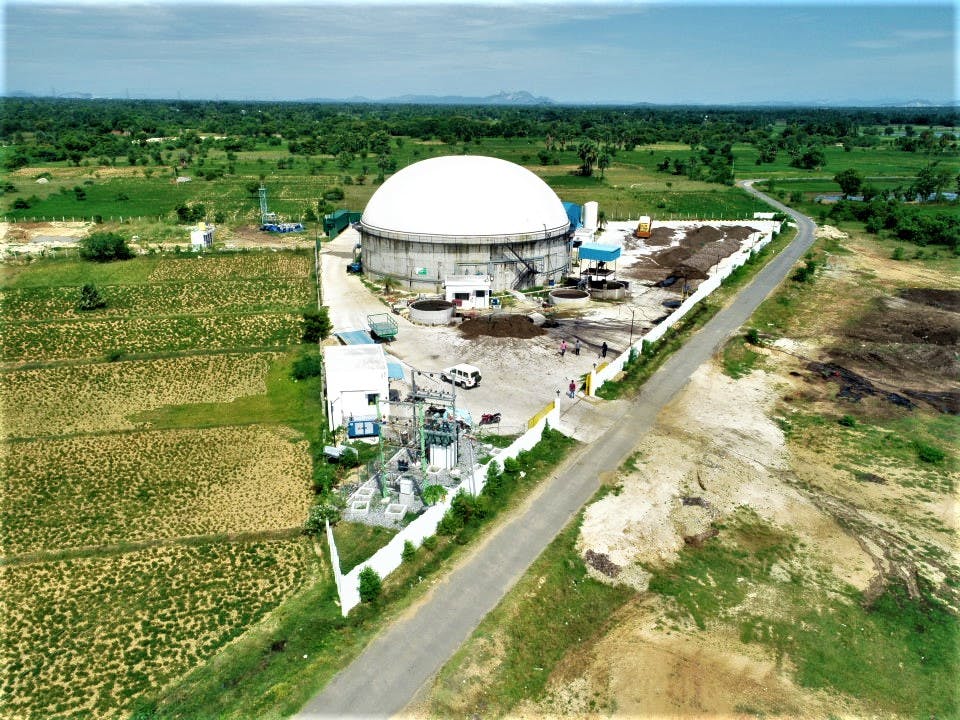 Some villagers opposed the bio-CNG plant’s construction and operation, mistaking its dome for that of a nuclear reactor. Image: R. Vishnunath.

The Tamil Nadu State Pollution Control Board, the state’s pollution regulator, couldn’t decide whether the plant should be put in the green or orange category of polluters. As per the board’s pollution index, plants are categorised as red, orange, green or white, where red indicates the most polluting and white the least.

Eventually, in September 2021, the Central Pollution Control Board – whose regulations apply across the country – put bio-CNG plants in the white category.

Although SATAT envisages a single-window approval for bio-CNG projects, Vishnunath found it hard to get approvals because officials didn’t understand the process. “We applied for a no-objection certificate through the single-window system. Since ours was the first plant in the south [of India], the officials were unsure about the process. So I went to each department for respective approvals,” he told Eco-Business. In the end, the approvals took more than eight months and multiple visits to 17 different departments.

A parliamentary review of SATAT in December 2022 took a grim view of these delays and recommended a blanket approval, among various other recommendations.

After starting operations in 2021, Vishnunath supplied bio-CNG to local industries for heating for a year. But storing and transporting the 5.5-tonne cascades – large racks of cylinders in which the gas is stored – posed practical difficulties.

Bio-CNG is supplied in 5.5-tonne cascades - large racks of cylinders - whose weight and dimensions create practical difficulties for small industries to use the bio-CNG. Image: R. Vishnunath.

Rege of Mailhem says injecting directly into the national gas grid is most cost-effective, as it avoids the expense and equipment for compressing gas, filling it into cascades and transporting them.

Mailhem has its own bio-CNG dispensing pump, much like a petrol or diesel station. It sells the surplus to OMCs. From one of Mailhem’s plants, gas is injected into the national gas grid that supplies gas for automotive, domestic cooking and commercial uses.

Due to lack of awareness and the logistical problems, offtake of bio-CNG has been slow. Chinnappan’s plant had to partially flare the gas produced from June 2021 to April 2022, leading to unnecessary wastage and costing dearly in terms of lost sales.

“Whether there is demand or not, the plant has to produce gas. We have to constantly feed live bacteria or cow dung to prevent decay of the waste. So, we can’t shut down or pause production,” explained Chinnappan. “Flaring was the only option.”

Six months ago, oil marketing companies started buying the gas, much to the entrepreneurs’ relief. “But OMCs have no mandate to take a minimum quantity,” said Vishnunath, “If they did, it would be easier for us.”

As a result, some plants sell the gas to restaurants instead of waiting for OMCs to procure.

But the biggest problem is selling the manure, the residue from bio-CNG making, said Chinnappan.

“We get 30-40 kg of purified gas and 950 kg of manure from one tonne of raw material. Rich in nutrients, this manure can improve soil and plant fertility,” said Chinnappan. Although the government has mandated fertiliser manufacturing companies to buy this organic manure from bio-CNG plants, this mandate is not being implemented yet, he said.

Vishnunath told Eco-Business that when he used the manure on his own farm and saw increased yields, some organic farmers started to purchase manure from his plant.

But such purchases have been piecemeal, and the quantity of manure produced is large. The producers say the government must buy in bulk and sell it to farmers at a subsidy.

This story has been produced as part of Earth Journalism Network’s Renewable Energy Story Grant 2022.