The movement among businesses to create not just profit but also value for communities and the environment is gaining more converts. Ahead of the CSR Asia Summit next month, Eco-Business talks to Rob Coombs, CEO of Interface’s operations in Asia Pacific, on why this fresh way of thinking about business makes perfect sense.

In the Philippines, groups of fishing villagers are giving their discarded fishing nets a new lease of life. Previously, these nets would have ended up in the ocean and threatened the marine life on which their livelihoods depended.

Now, together with global carpet-maker Interface and the Zoological Society of London (ZSL), the villagers in 27 communities in the island of Bohol are collecting these nets and sending them to Interface’s factories to be turned into brand new carpets.

This effort has proven to be so successful that Interface is planning to expand the initiative to Cameroon in Africa.

Its benefits: boosting the incomes of these fishing villagers, cleaning up previously clogged waterways, while cutting Interface’s raw materials costs – are exactly why Interface has pursued an inclusive business model.

Interface, with 7 manufacturing facilities and more than 3500 employees, is the world’s largest producer of carpet tiles. In 2013, it made a profit US$341 million on sales of US$960 million. The company is listed on Nasdaq in the U.S. and has won numerous awards for its sustainability efforts.

Inclusive business is a relatively new notion that is gradually winning over corporate sustainability advocates globally.

More than traditional corporate philanthropy or corporate social responsibility, inclusive business looks for models that “do well by doing good” and these models become part of the companies’ core business activities.

First formalised in a 2008 United Nations Development Programme report called Creating Value for All, inclusive business is an increasingly powerful model that the global private sector can use to advance development, reduce poverty whilst simultaneously creating economic success and ensuring competitiveness.

“Making money is the result of what you do. And a result is not a purpose. The purpose of business should be to create wider value across a broad stakeholder group,” Coombs says. 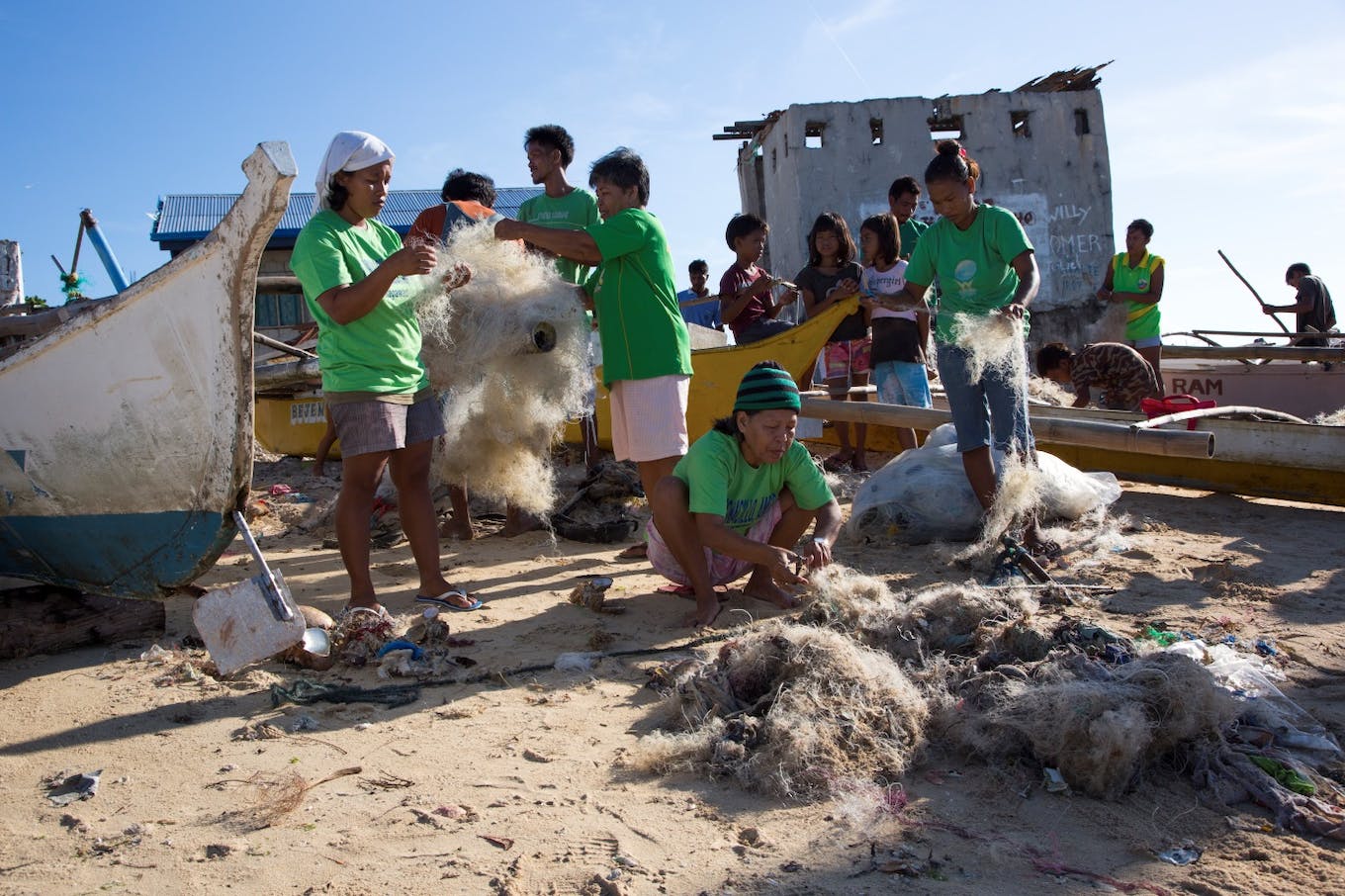 Participants report that this programme builds and strengthens the existing Filipino sense of community, by providing regular opportunities to get together to collect nets, and weekly community banking meetings. Image: Interface

“This is saying I need to be looking at my business in such a way that the value is spread beyond shareholders and employees to a wider group of which Mother Nature is one. It’s about a more holistic view of the impact of business.”

From concept to reality

The concept seems simple, but Interface faced many difficulties in translating it into reality. The main challenge was moving away from its dependence on virgin nylon, which is a petroleum-based product and not sustainable over the long term.

When it started looking for alternatives, its first attempt – working with local weavers in India to turn their material, a type of natural fibre, into carpet tiles – did not pan out; customers simply did not buy the products.

Soon after, Interface found out about the fishing villages in the Bohol island of the Philippines, which ZSL has been working with on other projects.

“It was entirely coincidental, really,” Coombs explains. “We have also been working with ZSL on other projects elsewhere and when we found out about the possibility of these nets, we were really excited.”

As it turns out, one of the best sources of recycled nylon – the type that the company uses in its products – comes from discarded commercial fishing nets.

This was a ‘light bulb’ moment for the company, Coombs says. It set up part of its supply chain to get the fishing villagers to collect discarded nets that had clogged up the beaches and waterways, taught them how to package the nets into bales, and linked them up with micro-financing providers for initial funding.

“And what we developed there was a model whereby the natural environment benefited from the cleanup, the villagers were benefiting from the extra income, which was helping supplement what was a fairly volatile income from fishing alone,” Coombs says.

“And Interface benefited through the sourcing of this wonderful recycled material that we could then turn into carpets. That reduced our need to use nylon from virgin sources.”

Two years and 27 fishing villages later, the programme is so successful that Interface plans to extend it to other parts of the world, beginning with Cameroon in Africa.

Interface’s journey in sustainability started more than 20 years ago, when its late founder Ray Anderson – who was sometimes called “the greenest CEO in America” – decided to change the way the company does business.

He started the company on Mission Zero, which meant working towards zero environmental impact by 2020.

Continuing this mission after Anderson passed away in 2011, Coombs believes that every company that wants to experiment with inclusive business needs to start by understanding the impact that it has, on its people and the environment.

The second prerequisite is to “open your mind” to the possible benefits of factoring a wider stakeholder group, he adds.

“I think that’s the major obstacle,” Coombs says. “It’s an unwillingness to look beyond their very narrow perspective. Once a company understands the benefit, there will be no stopping it.”

Coombs will be one of many business leaders who will be sharing his views on inclusive business and how a company can use its value chain to create opportunities for poor people and communities at CSR Asia’s ninth annual summit next month. He will take part in a CEO debate on the topic, alongside Unilever and Onyx Hospitality Group filmed by CNA as part of an Investor Insights CSR special.

With the theme ‘Strategic Value Creation’, the conference will be held from 7 to 8 October in Kuala Lumpur, Malaysia, and will host up to 500 CSR leaders from business, civil society, and academia across the region.

Over two days, the summit will explore what strategic value creation is, how companies can integrate it into their own business strategy, and some innovative business models that can address social and environmental challenges.

The CSR Asia Summit 2015 will be held from 7 to 8 October 2015 in Kuala Lumpur, Malaysia. Click here to find out more and register for the event. Book by 18 September. Eco-Business subscribers receive 15 per cent discount. Use code ECOBIZ.