In pictures: Plastic blights the beauty of Kathmandu

Although Nepal has strong laws about the use and disposal of plastic bags, weak regulation, and a general lack of awareness have made plastics a menace, especially for the rivers and rivulets of Kathmandu.

Prem Rai works in a hospital in Kathmandu, but he loves fishing in the Bagmati river at the weekend. He fishes from the Sundarijal to Gokarna segments of the river just north of the city, stretches that are still somewhat clean. Below Gokarna, the Bagmati—which flows through the heart of Nepal’s capital—is so polluted it’s almost “dead”.

But even in the “clean” areas of the river he finds his net is full of plastic bags, not fish.

With a population of about 2.5 million (including the districts of Kathmandu, Lalitpur and Bhaktapur) the Kathmandu Valley produces 523 tonnes of waste per day, out of which 12 per cent is estimated to be plastic.

Due to the lack of awareness and a dysfunctional waste management system some of the plastic and polythene bags are thrown into, or dumped on the banks of the the rivers and rivulets that run through the valley, and finally end up in the Bagmati River – considered Nepal’s holiest river but is heavily polluted.

Due to easy availability plastic and polythene bags have become integrated into daily life for people in the Kathmandu valley, replacing older biodegradable material used for bags or packing material. 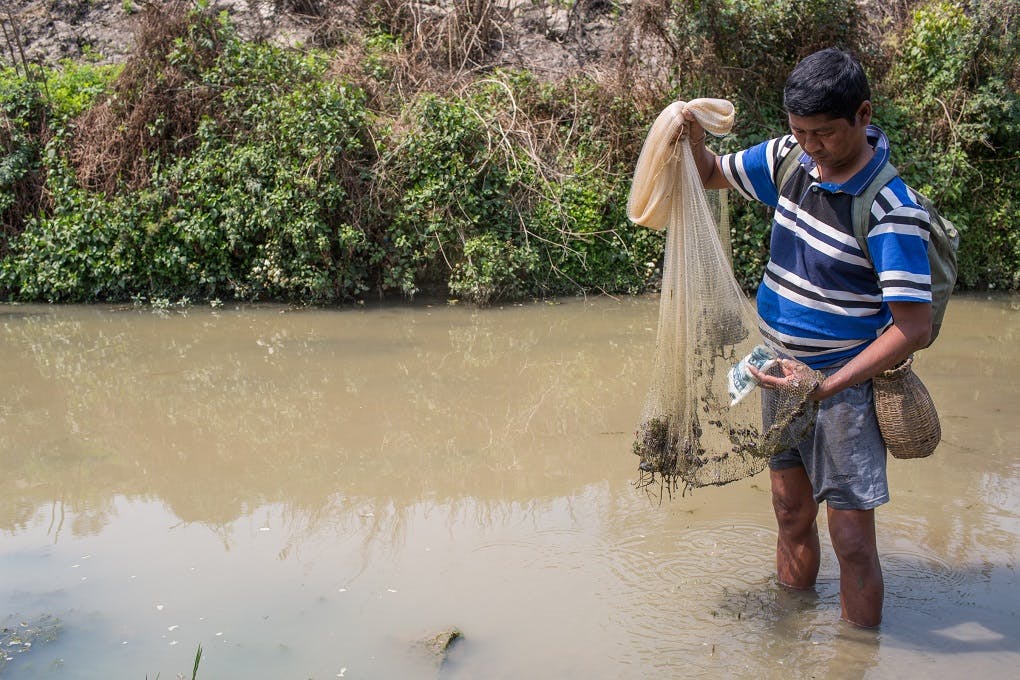 Prem Rai removes plastic from his fishing net that was caught during fishing in Bagmati River near Gokarna in Kathmandu. Every Saturday he goes to fish in Bagmati river from Gokarna to Sundarijal where Bagmati is a bit clean. All images: Nabin Baral

Even outside the city, plastic proliferates. Kathmandu, located in the foothills of the Himalayas, is one of the most beautiful natural areas in the world. But when people go out to enjoy the beauty, they leave their plastic behind. 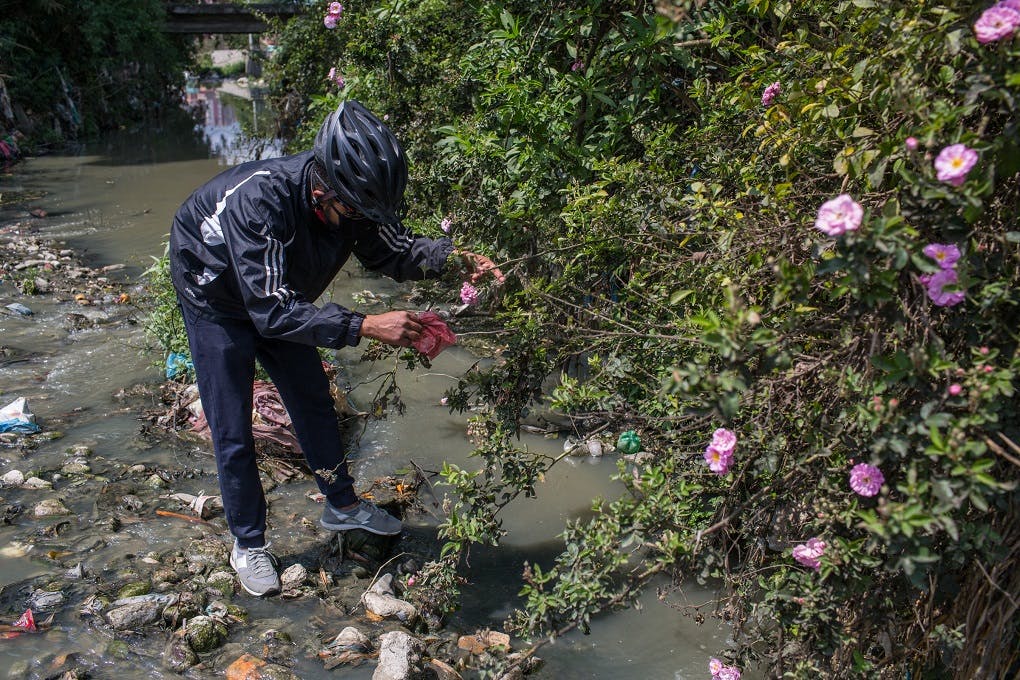 Abhisekh Pokhrel removes polythene bag stuck on a wild rose growing on the bank of one of the Rivulet of Bagmati River in Kathmandu.

Abhisekh Pokhrel, part of a “No Polythene Bag” campaign, claimed that he had stopped using plastic bags completely and is urging others in the city to do the same. In the last few years various campaigns have been launched to clean the bags and other garbage from the rivers, but with only partial success as the new plastic replaces the old plastic removed.

There are laws and policies in place, but they are rarely enforced. Before a lackadaisical government, and an uncaring public, the river cleaning campaigns—usually carried out on Saturdays—are not able to do much. Without deeper social change plastic will continue to blight the beauty of Kathmandu. 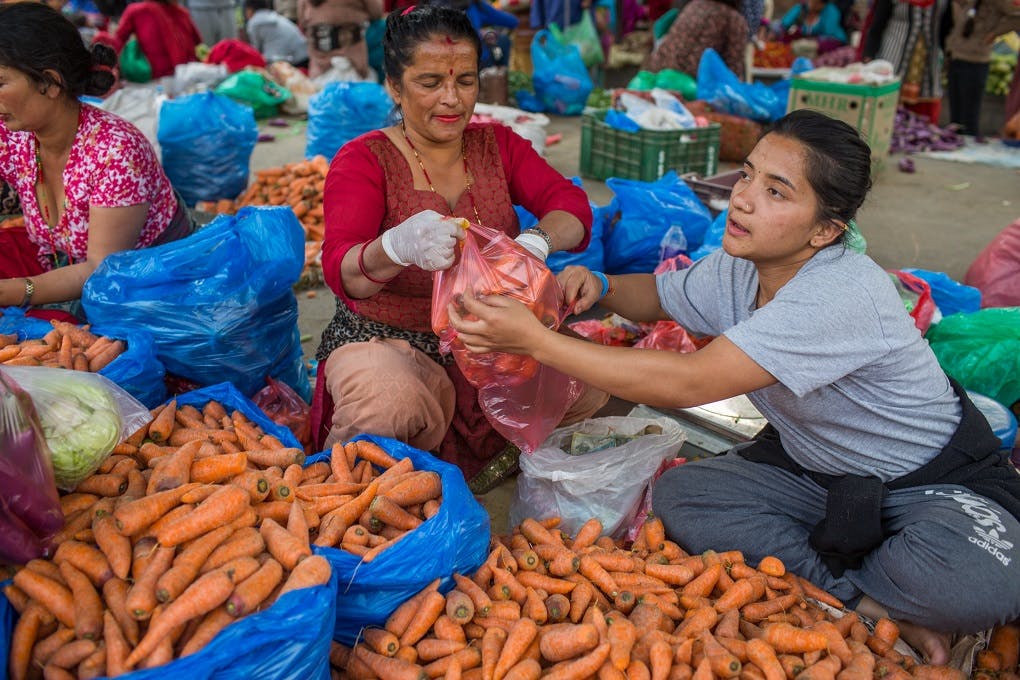 Vegetable sellers double up polythene bags as customers demand strength at the Kalimati Fruits and Vegetable Market, the biggest such market in Kathmandu Valley. 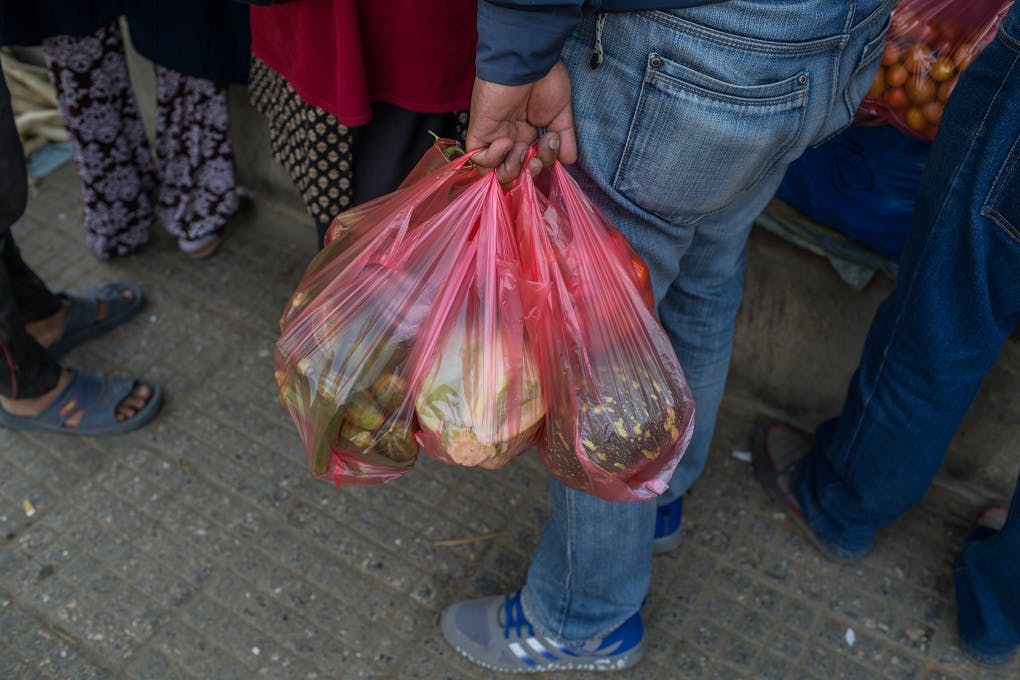 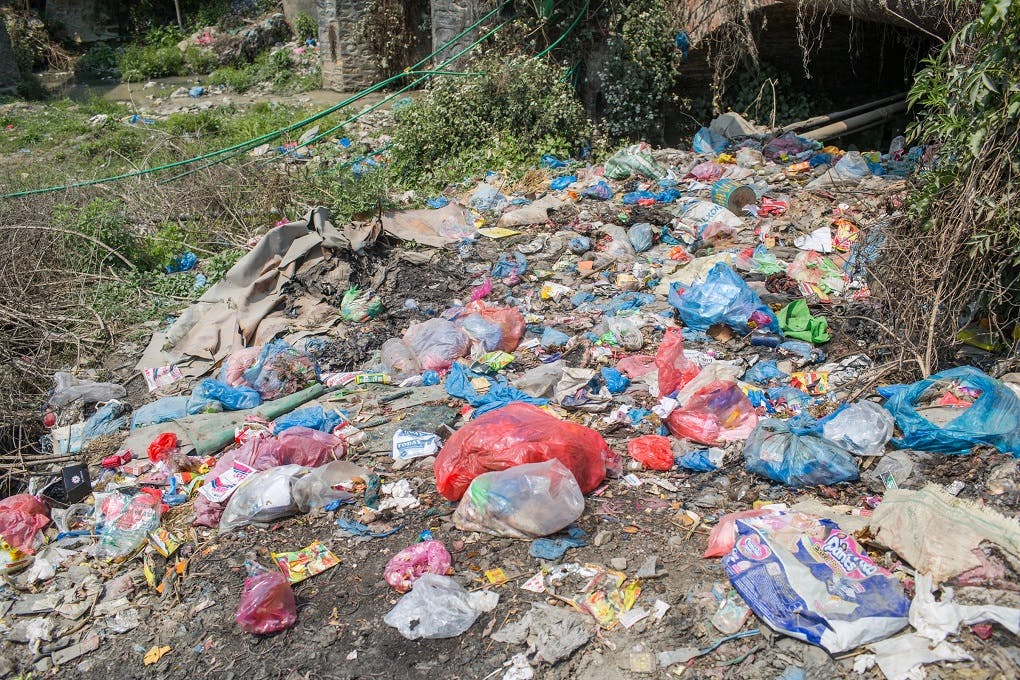 Garbage thrown by people on the bank of a rivulet which is a tributary of the Bagmati River. 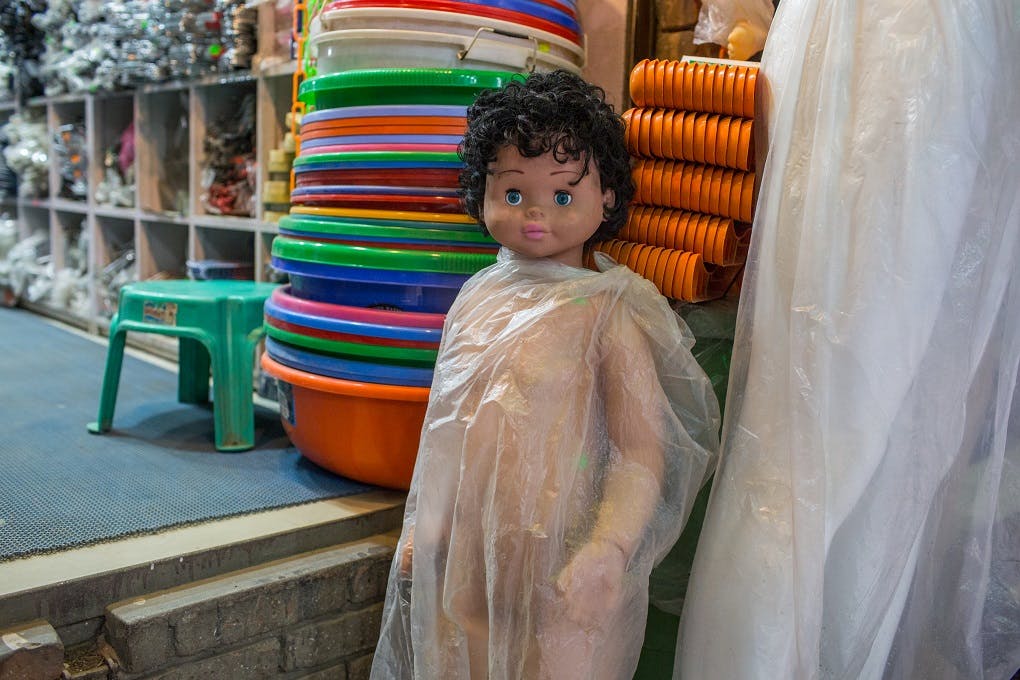 A mannequin is covered with plastic at a shop in New Road, Kathmandu. 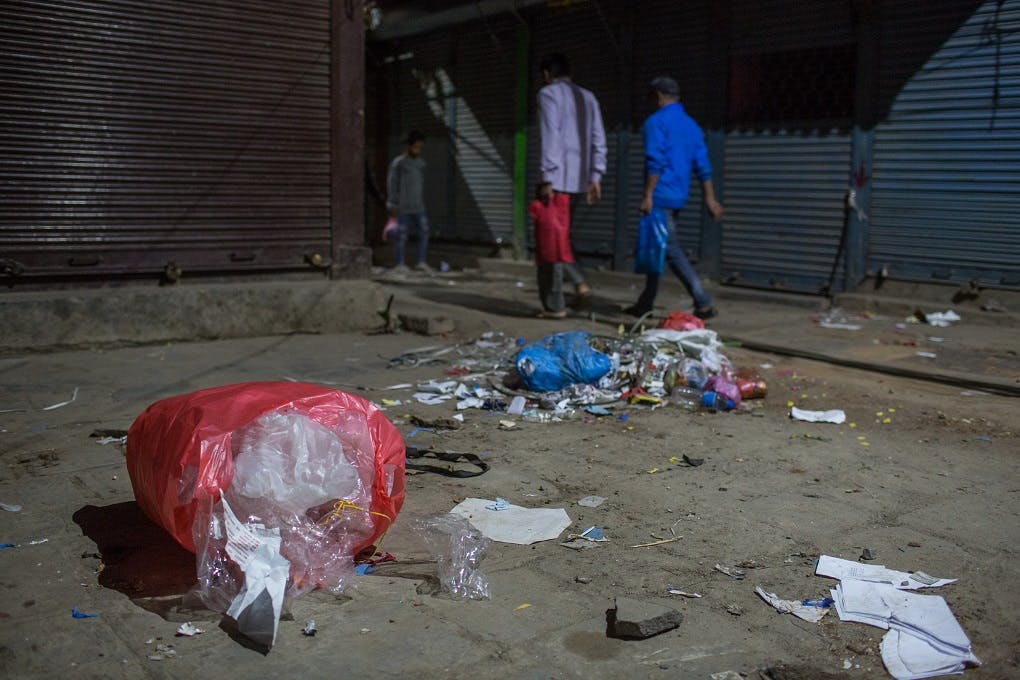 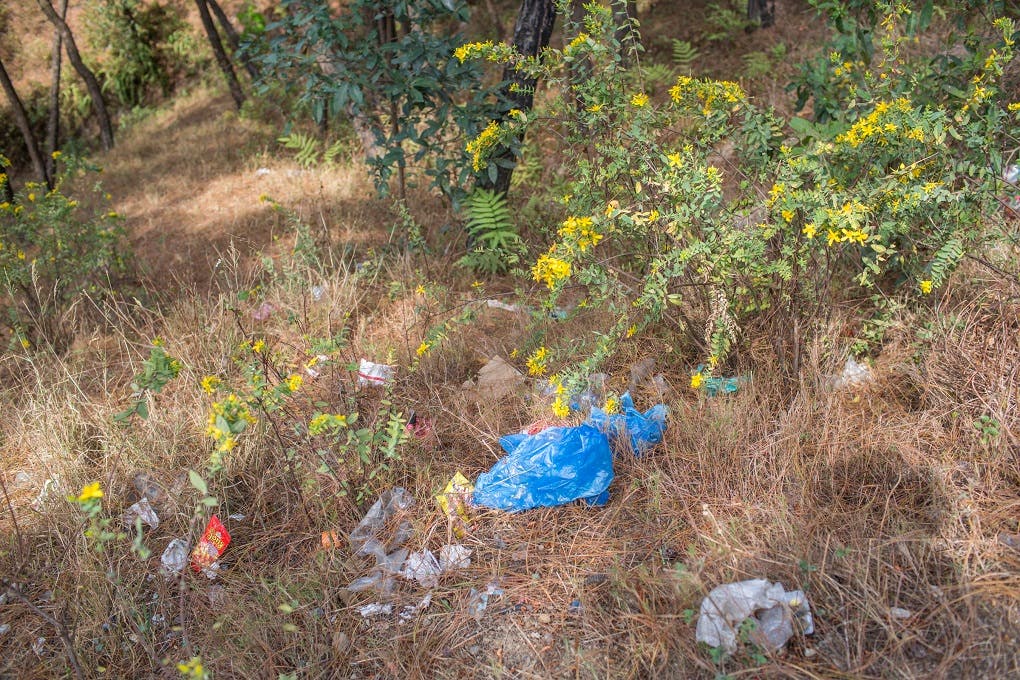 Plastic garbage left by picnickers after a weekend in the forest area of Shivapuri National Park. 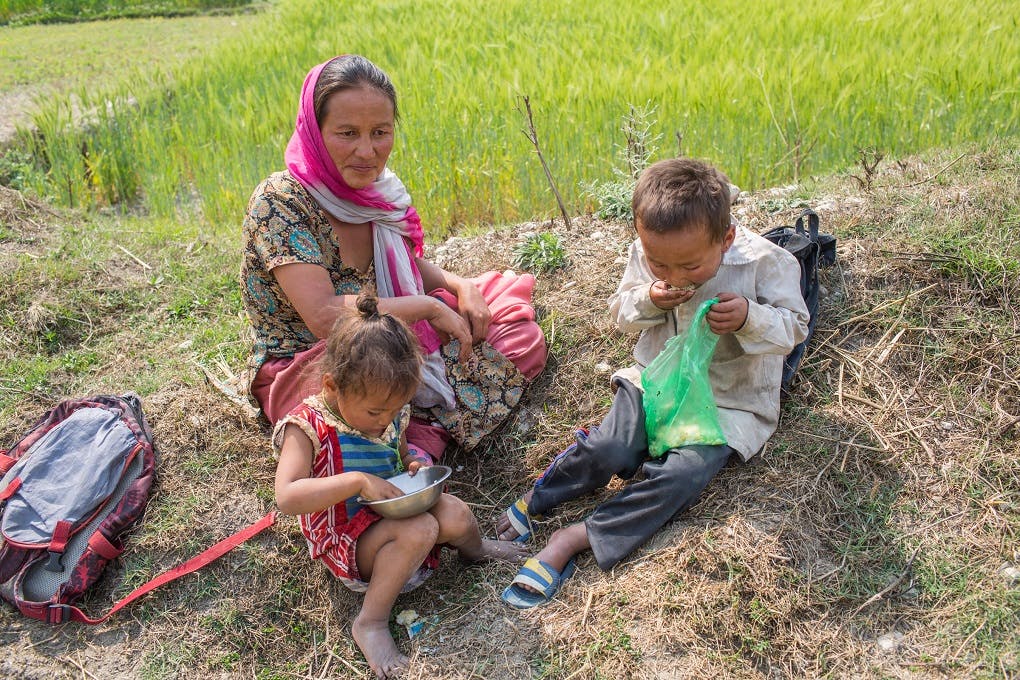 A boy eats rice on polythene bag near wheat field by the side of Bagmati River in Kathmandu Valley. People are unaware that such polythene bags will end up in the Bagmati. 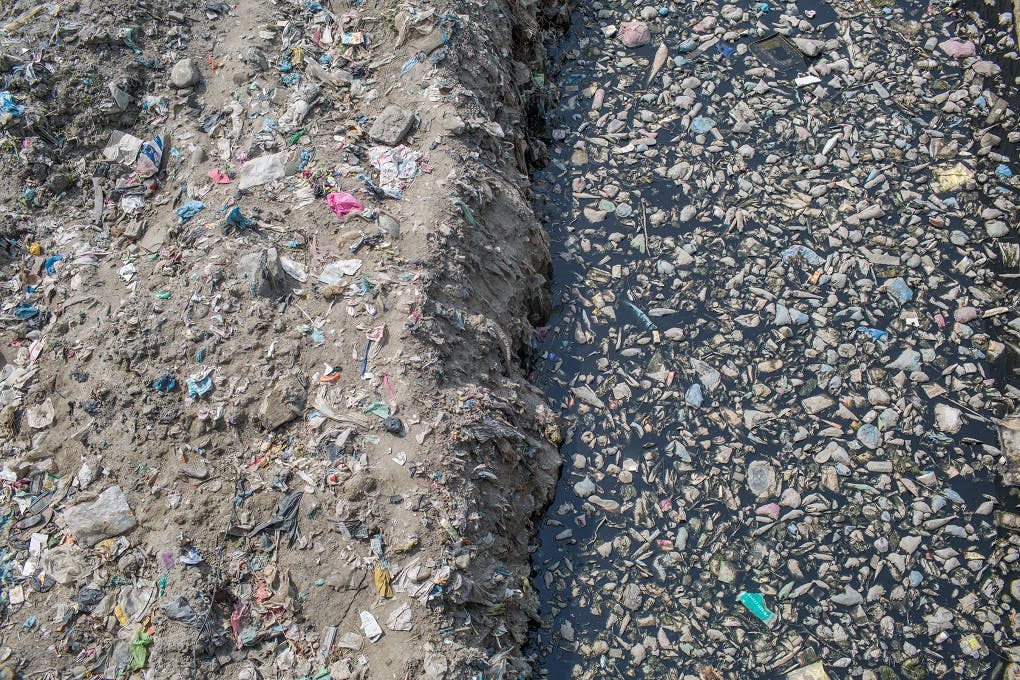 Plastic garbage floating in the Bishnumati, which is one of the main tributaries of the Bagmati river near Teku Dovan in Kathmandu Valley. Just a few metres away from this site is the Garbage Collection Centre of Kathmandu Metropolitan City. 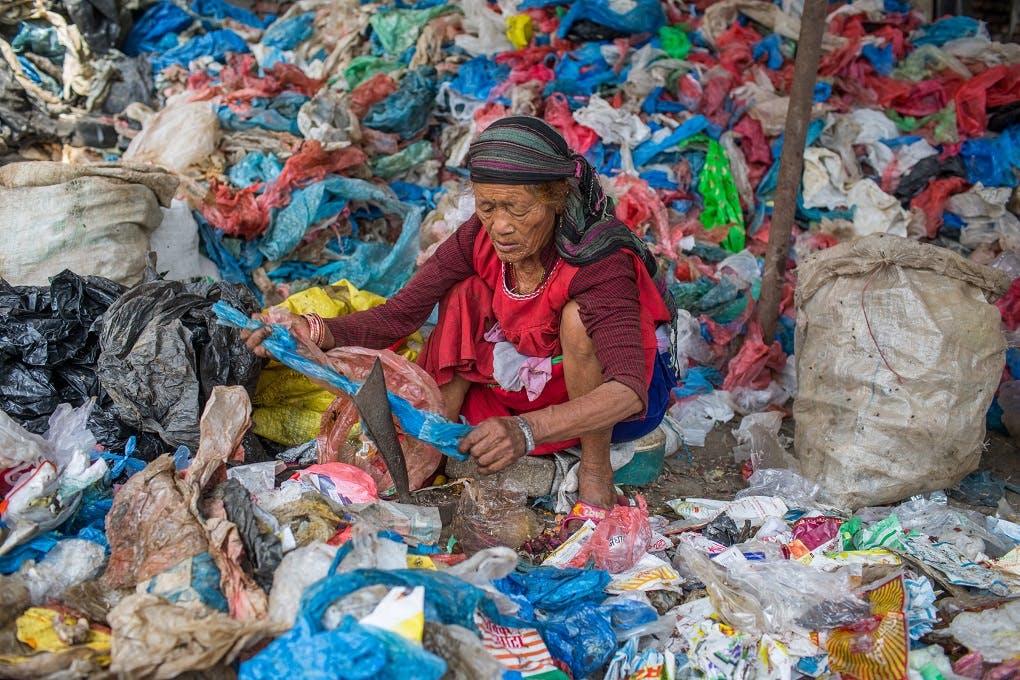 A woman cuts plastic bags that are collected from the Garbage Collection Centre of Katmandu Metropolitian City. Some of the garbage polythene bags are recycled but some are dumped in fields and rivers of Kathmandu Valley. 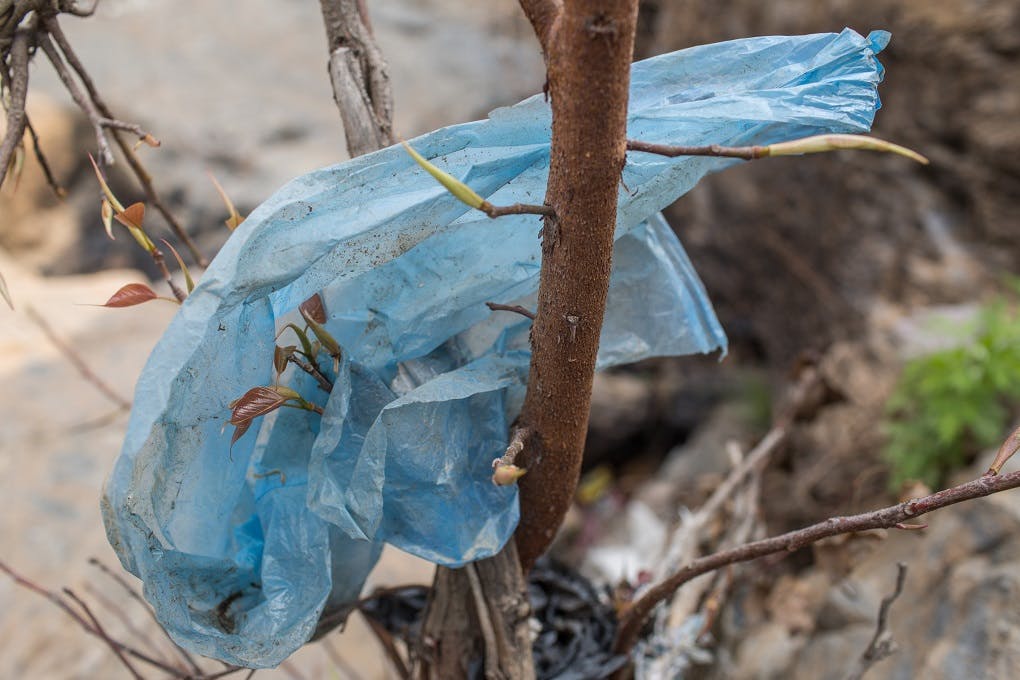 New buds and leaves grown through a polythene bag in a Peepal tree on the bank of the Bagmati in Chovar.