Negotiations at the climate summit are heading to the wire. Eco-Business takes a look at key moments captured at the talks so far in Sharm El-Sheikh.

The second half of the COP27 discussions in Sharm El-Sheikh expanded further on the theme of “loss and damage” by spotlighting water-related issues and their societal repercussions.

In a press statement on the proceedings, the United Nations estimated that around 40 per cent of the world’s population is affected by water scarcity and that 90 per cent of disasters are water-related. The document also highlighted how water scarcity disproportionately affects women and girls in developing countries, as their increasingly onerous household responsibilities prevent them from taking advantage of poverty alleviation opportunities like receiving an education.

This year’s summit also placed special emphasis on the role of youth in fighting climate change by organising the inaugural Youth-led Climate Forum and the first-ever Children and Youth Pavilion, though there have been accusations about “youth-washing”. Other key developments include India’s surprising push towards phasing out all fossil fuels and the announcement of the Global Shield initiative, which seeks to improve low-income and developing countries’ ability to respond and recover from climate-related natural disasters.

Eco-Business correspondent and photojournalist Liang Lei has been on the ground in Sharm El-Sheikh to capture the key moments from the 27th United Nations climate change conference, which has brought together government officials, climate experts and activists from nearly 200 countries to negotiate deals for a better future. 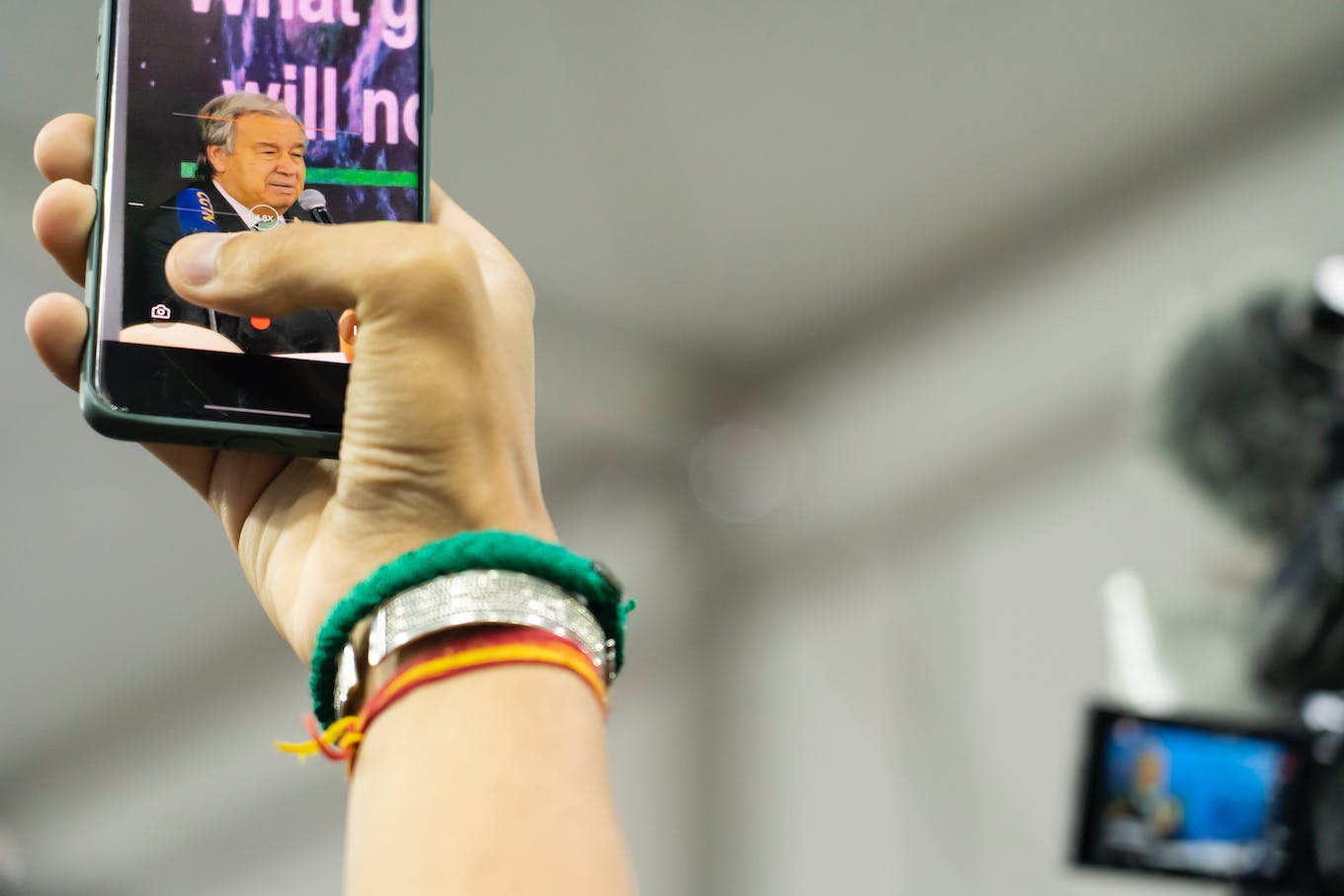 “There are moments in our lives that are unforgettable. My last visit to Pakistan was one of those – to see an area flooded that is three times the size of my country. To see the loss of life, loss of crops, lost livelihoods,” said United Nations Secretary General Antonio Guterres at a media stakeout at the Pakistan pavilion on 7 November, 2022.

Guterres, who hails from Portgual, visited Pakistan in September after it was hit by record-breaking floods that had at one point affected a third of the country, according to local officials. About 1,700 people died and total economic losses added up to nearly US$30 billion.

Guterres also called for financial reforms which would allow middle-income countries like Pakistan to mobilse funds for disaster recovery. 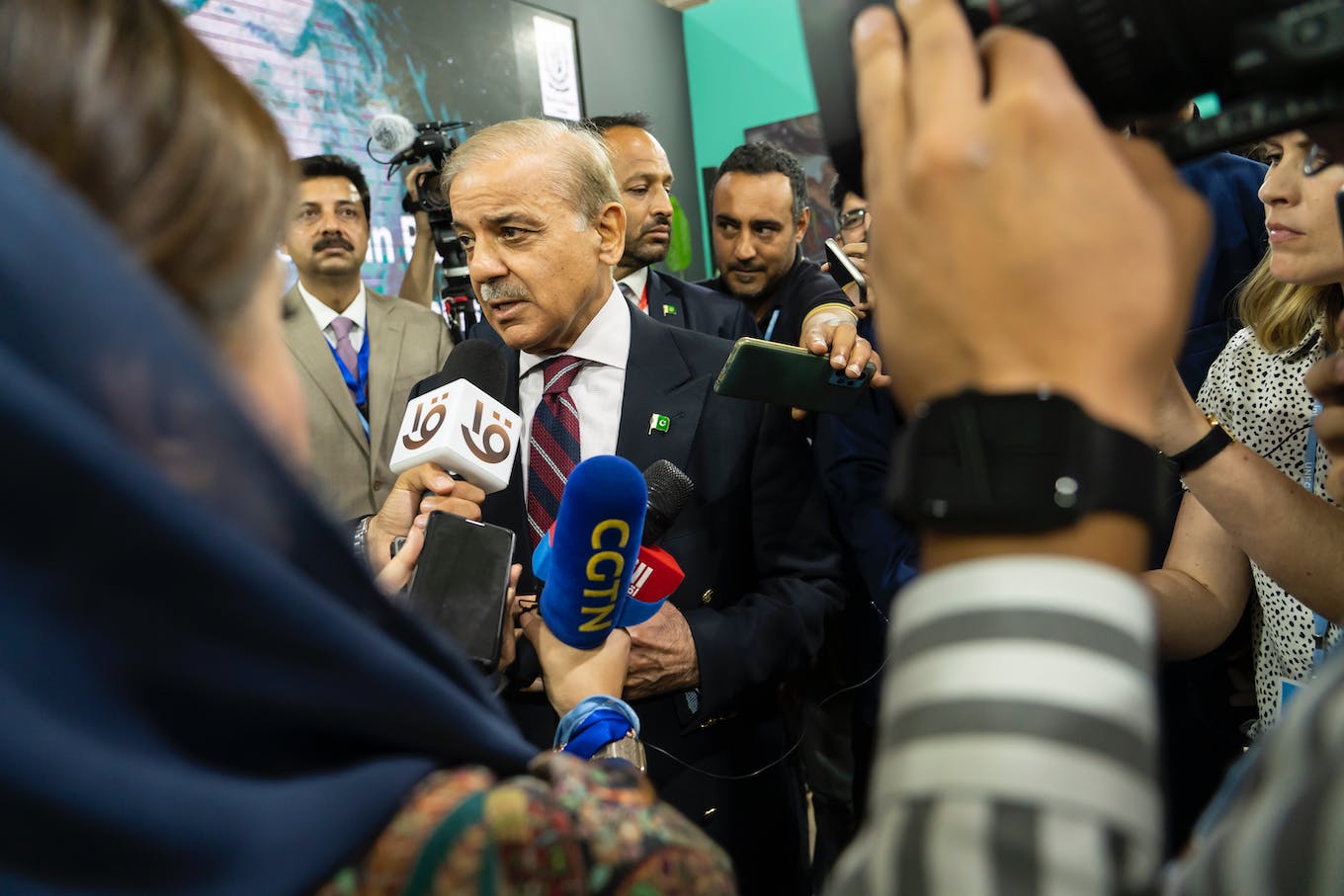 “Climate change has ravaged our country, millions of acres of land with standing crops have been totally destroyed; millions of houses have been destroyed. People have lost their life savings and winter is setting in,” said Pakistan Prime Minister Shehbaz Sharif of the current conditions in his country, at a media stakeout at the Pakistan pavilion on 7 November, 2022.

He added that Pakistan cannot recover from the US$30 billion losses with its limited resources and asked for global contributions.

Sharif came to power in April amid political instability, following a vote of no confidence against his predecessor Imran Khan, who had since been calling for early elections and was wounded by gunmen on a rally earlier this month. 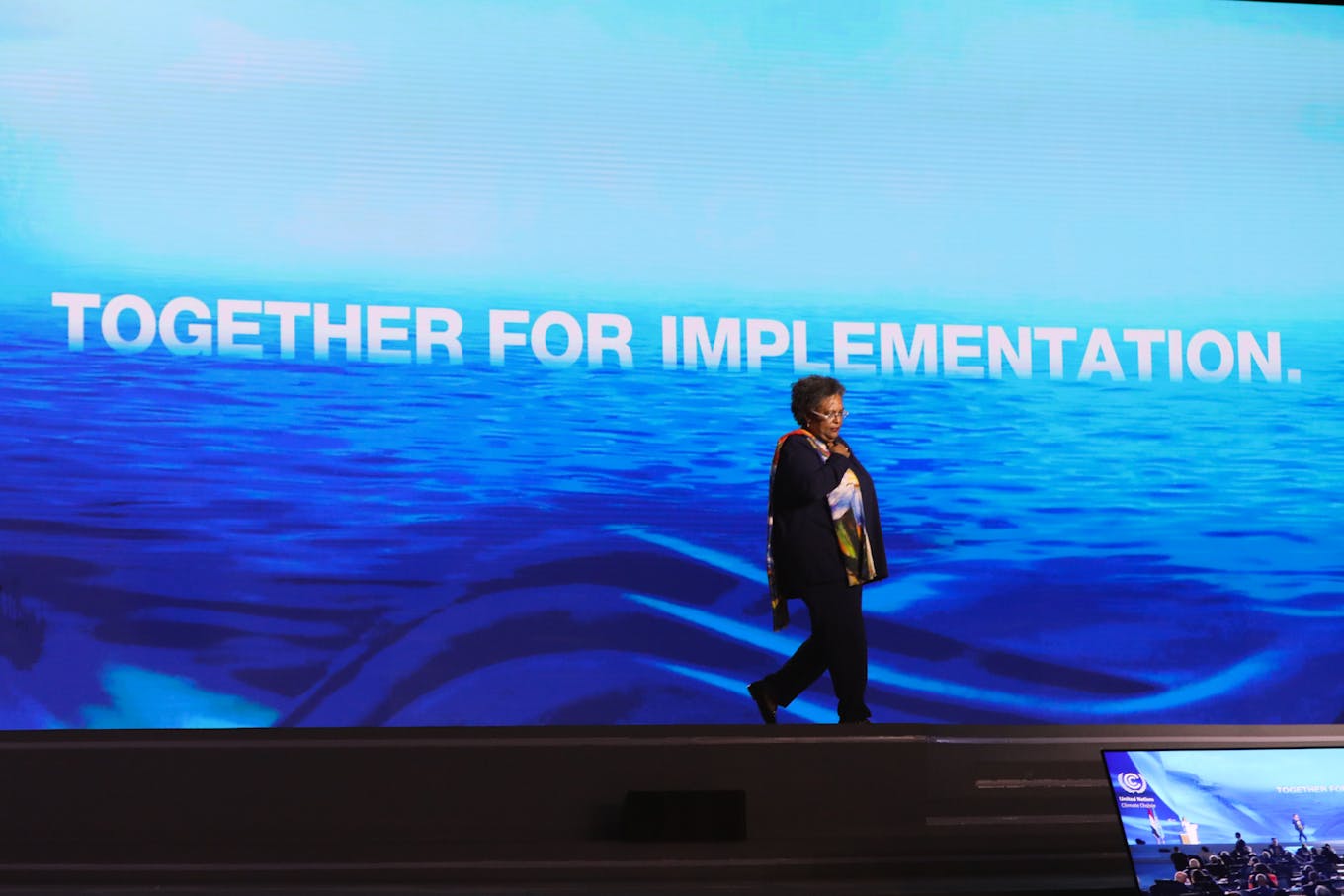 Barbados Prime Minister Mia Mottley walks off the stage after her speech at the opening of the world leaders’ summit on 7 November, 2022. Image: Flickr/UNclimatechange.

“This world still looks so much like it did when it was part of an imperialistic empire. The Global North borrows at interest rates of between 1 to 4 per cent; the Global South, 14 per cent,” Barbados Prime Minister Mia Mottley said during her keynote speech on 7 November, 2022.

Funders ask for higher returns from infrastructure projects in developing countries because they see greater risks of failure. Developing countries say this trend is preventing them from building out their renewable power capacity and defences against extreme weather events.

Mottley is one of the leading proponents for global financial reform. Through the “Bridgetown Agenda”, she is calling for the release of emergency liquidity from the International Monetary Fund (IMF), greater concessional lending by multilateral banks and the creation of a global fund for post-disaster recovery. 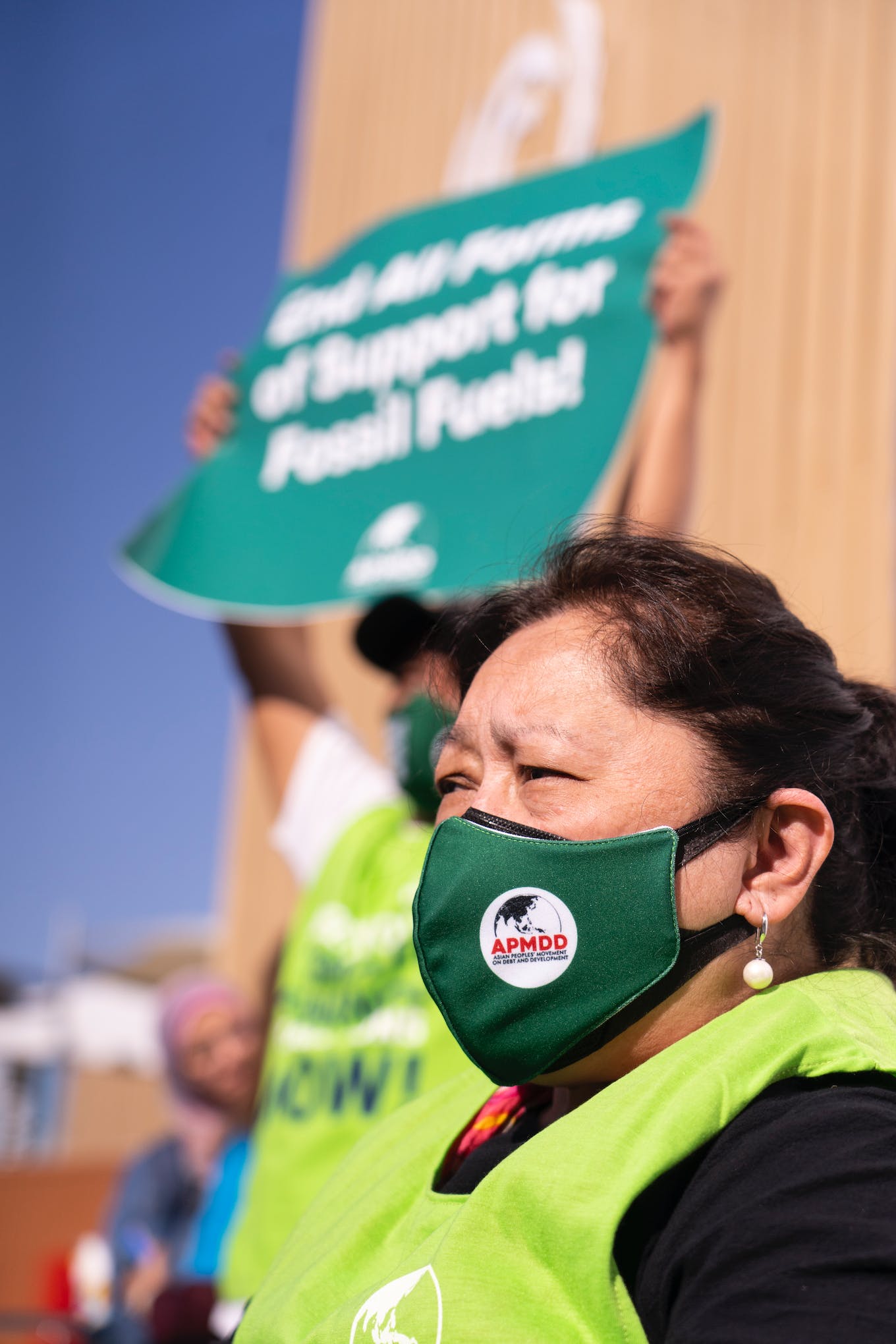 Lidy Nacpil, coordinator of the Philippines-based network Asian Peoples’ Movement on Debt and Development during a protest calling for climate justice and an end to fossil fuel financing on 9 November, 2022. Image: Eco-Business/Liang Lei.

“The governments of developing countries must be firm in their demand for climate finance, and they should not sound like they are begging – this is justice,” said Lidy Nacpil, coordinator of the Philippines-based network Asian Peoples’ Movement on Debt and Development, during a protest on 9 November, 2022. 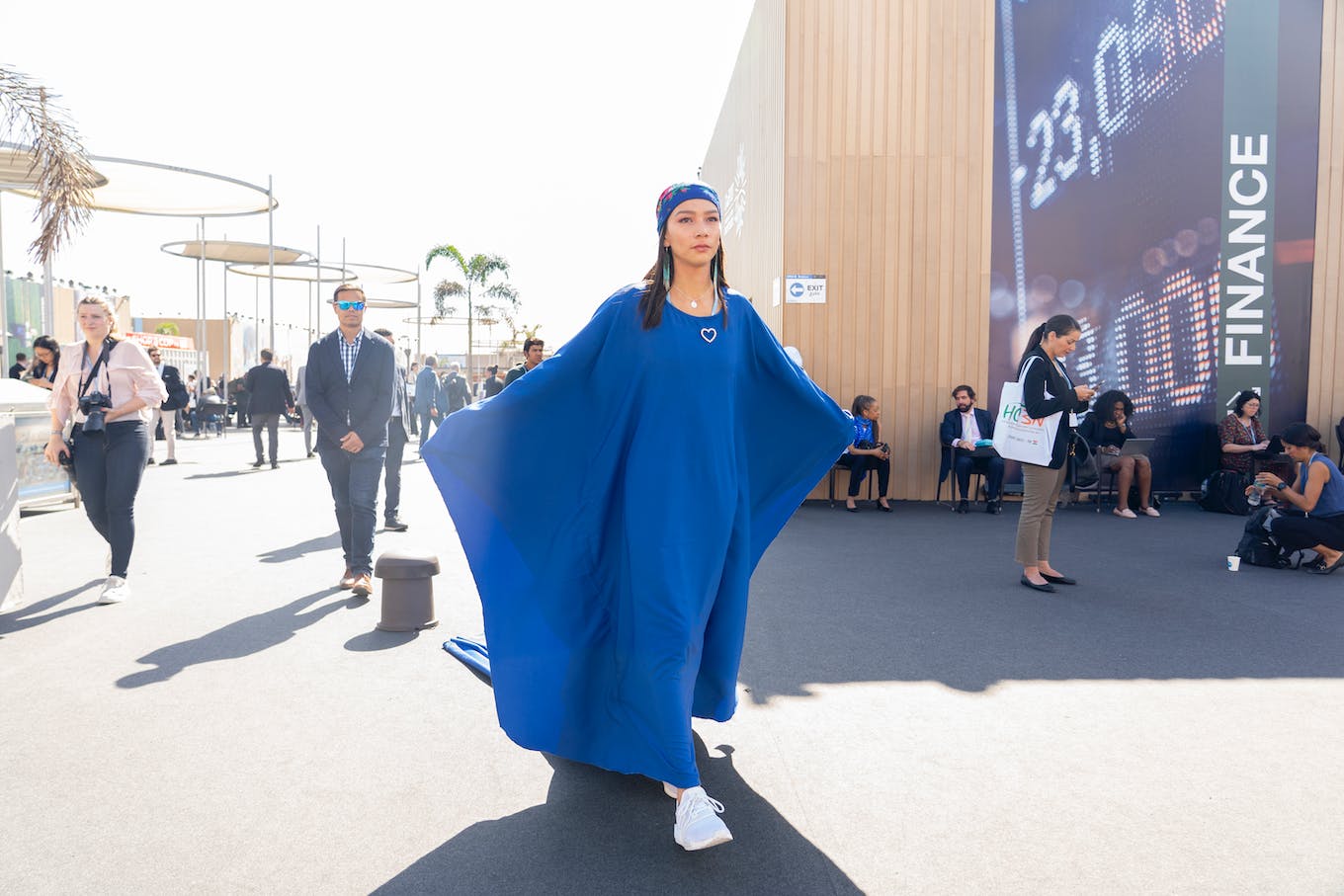 A woman dressed in a long blue dress walks slowly around the Sharm El-Sheikh conference centre on 9 November, 2022 in a demonstration calling for greater loss and damage financing. Image: Eco-Business/Liang Lei.

Many women from the Global South wore long blue dresses to demonstrate their support for the #FloodTheCOP27 protest, which demanded developed nations to tax and phase out their fossil fuel industries and fulfil their moral and legal responsibility to help developing countries most affected by climate change.

One participant, Rukia Ahmed from the Inter University Environmental Student Association in Kenya, said during a later demonstration, “Sea levels are rising, inflation is rising [and] temperatures are rising… so the people are rising too.” 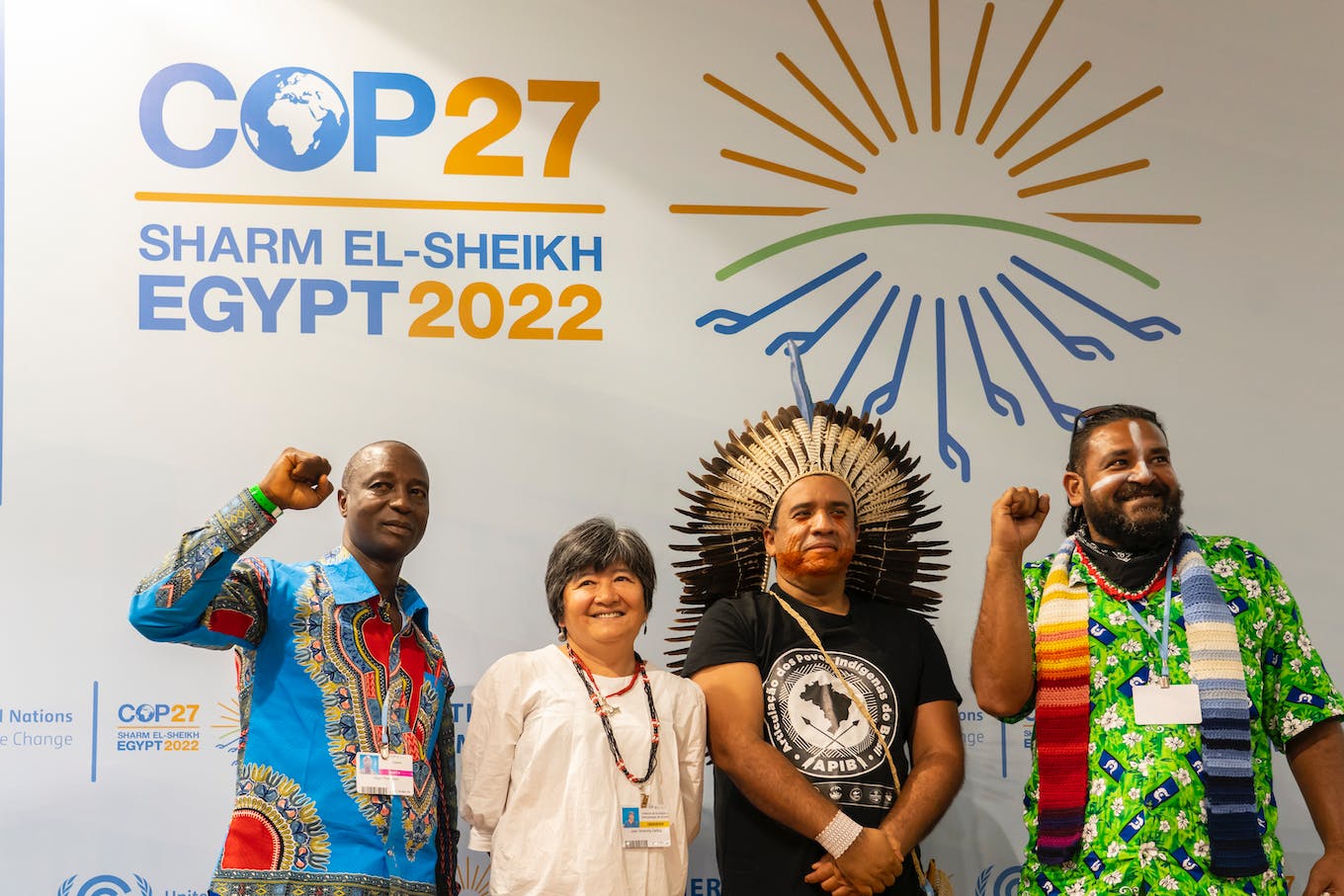 Indigenous community leaders pose for photographs after speaking on a panel about using legal action to protect their land. From left: From left: Saye Thompson, a Community Forest Management Body leader from Liberia; Joan Carling, who hails from the Philippines and is the global executive director of non-profit Indigenous Peoples Rights International; Dinamam Tuxá, coordinator of non-profit Articulation of the Indigenous Peoples of Brazil; and Yessie Mosby, part of the community of Australia’s autonomous Torres Strait Islands. Image: Eco-Business/Liang Lei.

“We don’t want to be refugees in our own country, that’s for sure,” said Yessie Mosby, who is part of the community of Australia’s autonomous Torres Strait Islands, during a panel discussion on 9 November, 2022. He is part of a group of islanders who won a case against Australia at the United Nations Human Rights Committee, which found that Australia’s climate inaction violated the islanders’ right to family life and culture.

Sea-level rise is eroding the Torres Straits Islands away. The Australian government has promised funding for seawalls and the maintenance of jetties around the islands. 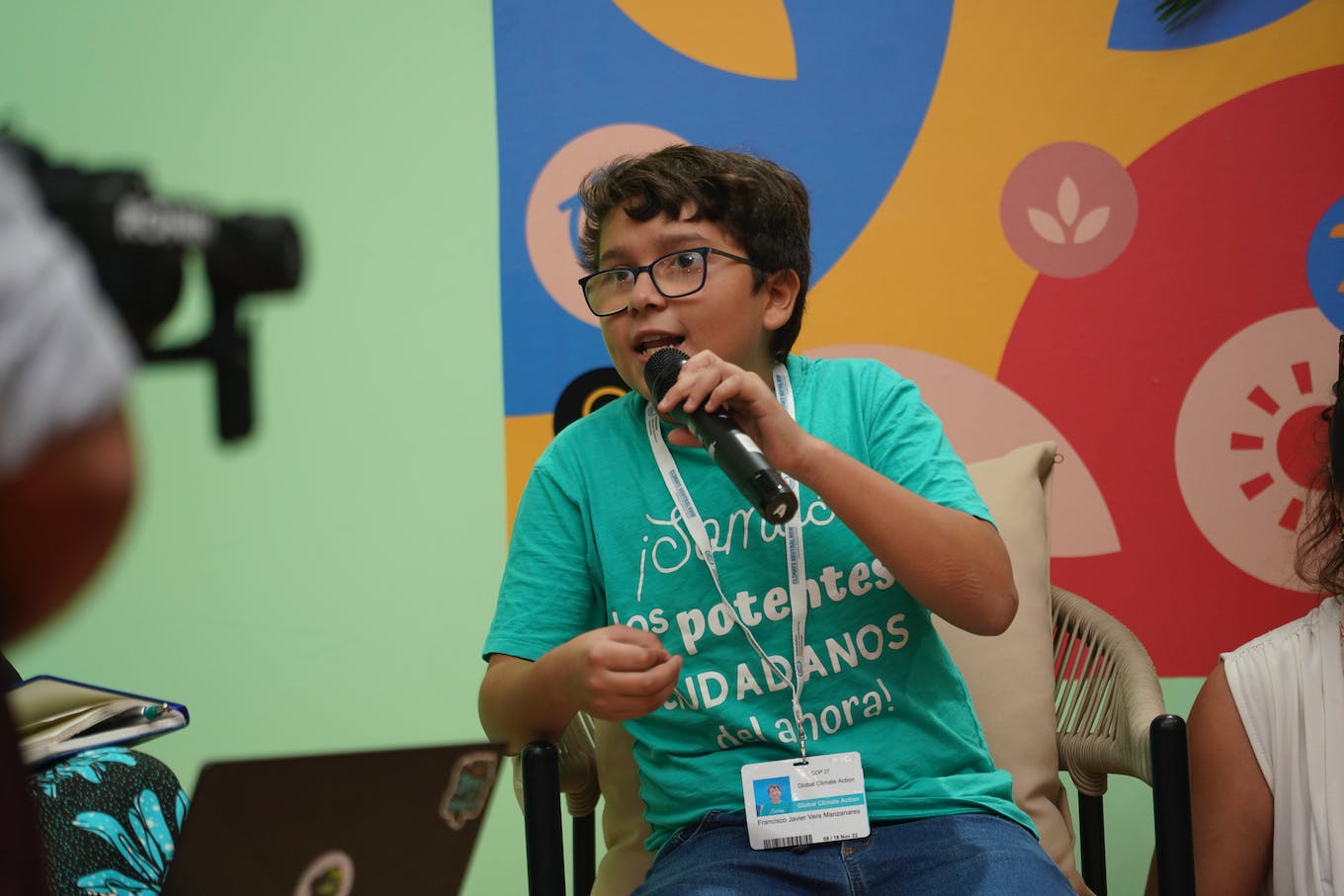 13-year-old Francisco Vera, a climate activist from Colombia, speaks at the opening of the Children and Youth pavilion, on 9 November, 2022. COP27 is the first COP summit to feature a pavilion dedicated to young people. Image: COP Presidency.

“Most of the consequences of climate change can be reversed if you take responsibility, if you stop prioritising money and personal interest over the interests of the people,” said Francisco Vera, a 13-year-old climate activist from Colombia, during a media interview, addressing the statement to world leaders. 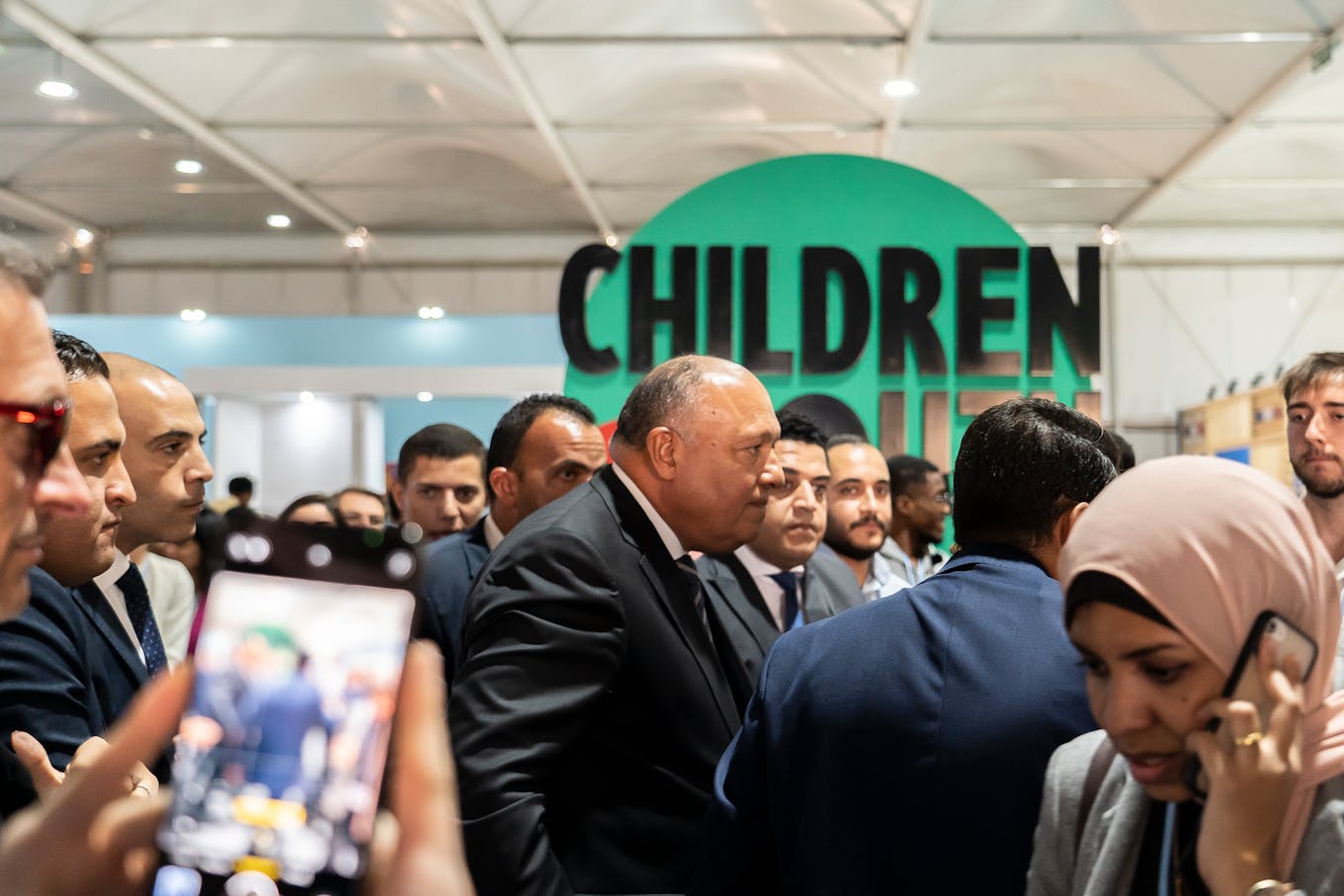 “As [COP27] president, I depend on your voices,” COP27 president Sameh Shoukry told a group of youths who gathered to hear him speak at the Children and Youth pavilion on 9 November, 2022. 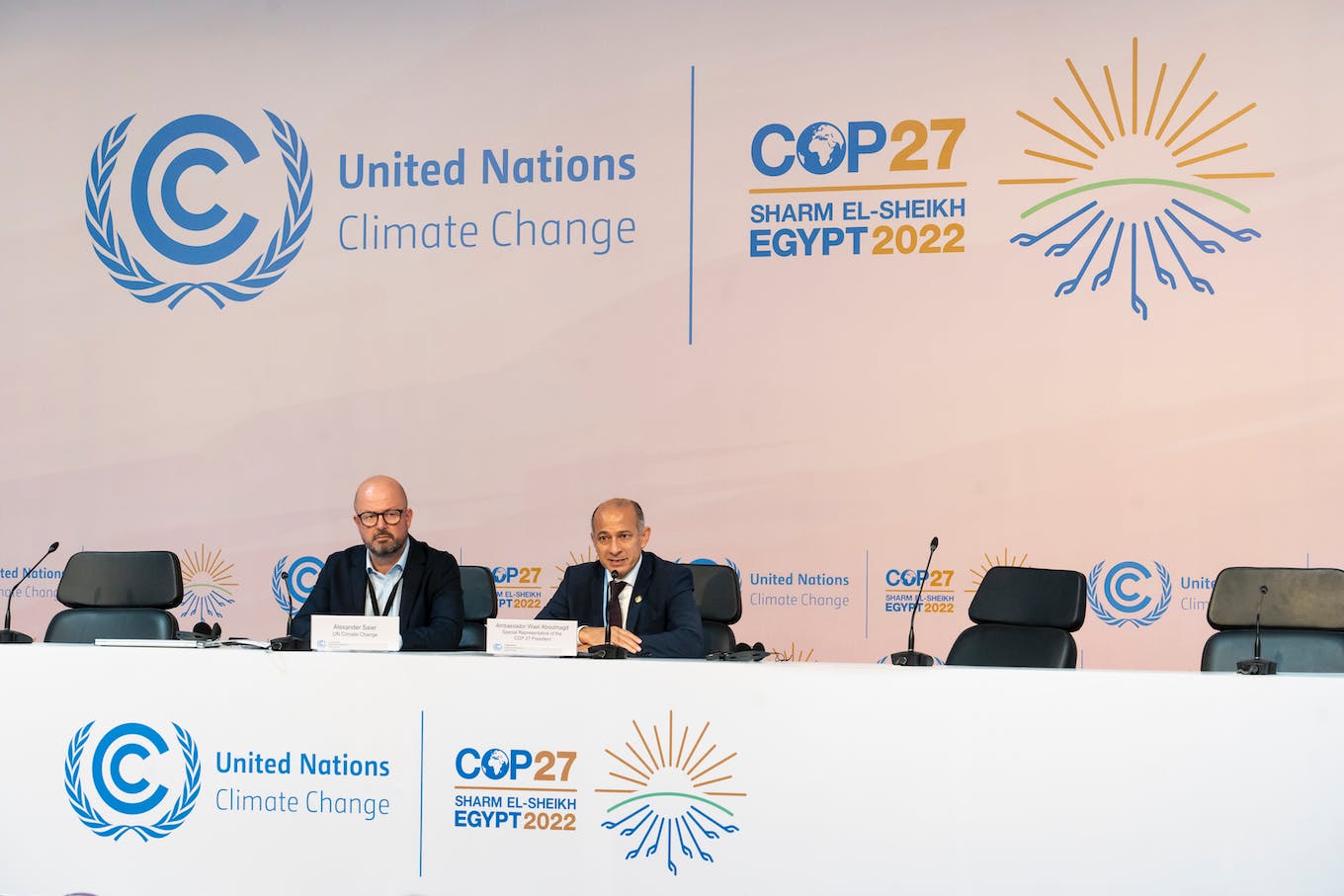 Egypt’s top climate diplomat Wael Aboulmagd and the communications chief for the climate change branch of the United Nations Alexander Saier held daily sessions at 1pm, where Aboulmagd spoke about the latest developments for 15 minutes before taking questions from reporters for the next 15 minutes.

In this particular session on 9 November 2022, Saier asked Aboulmagd to try to do something about the many aeroplanes flying low and loudly overhead. In another, Aboulmagd reminded Saier the correct pronunciation of his name. 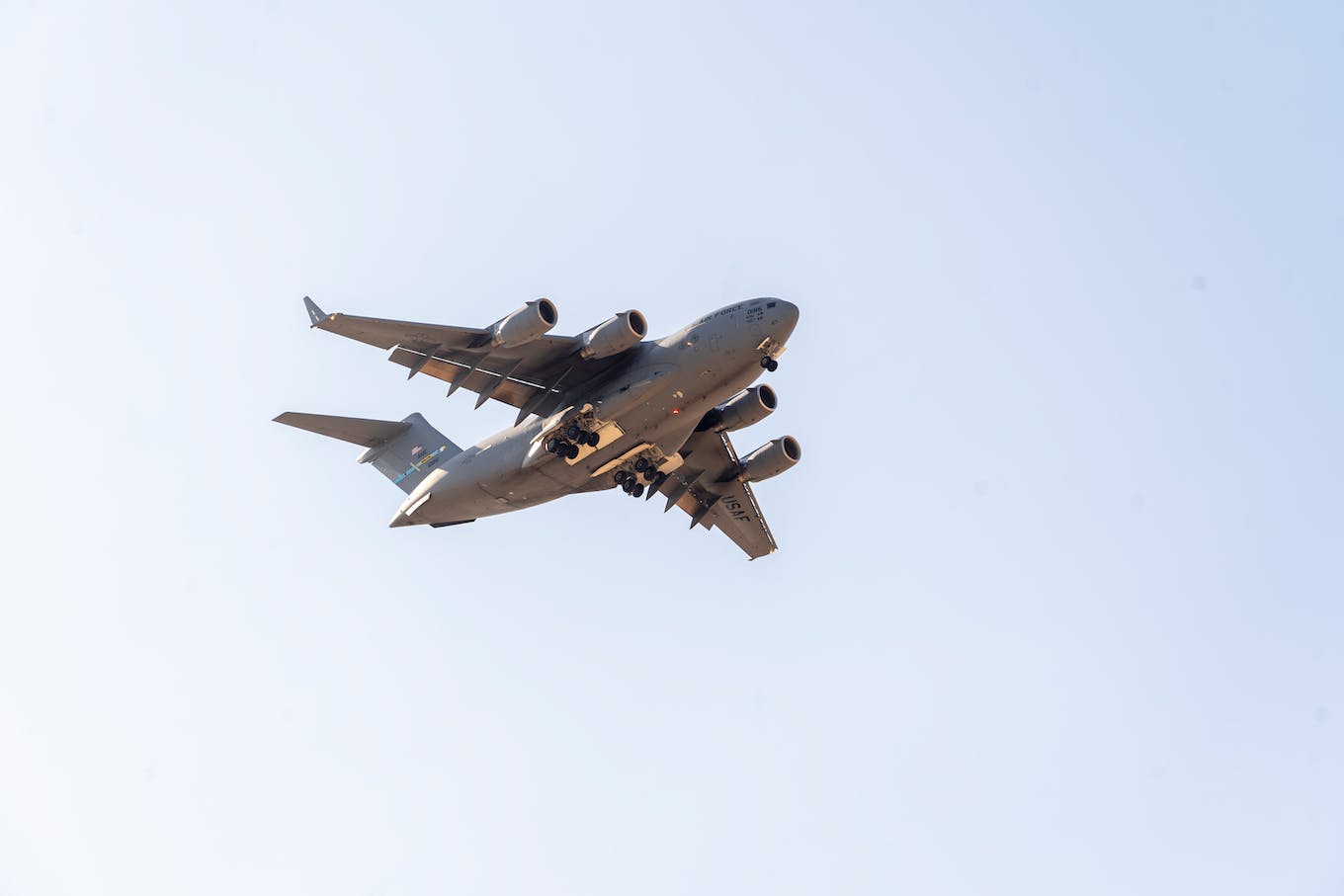 Though reducing emissions from fossil fuels was one of the most discussed topics at the COP27, many on social media have criticised climate delegates, including Brazil president-elect Luiz Inácio Lula da Silva, better known as Lula, for travelling to the conference on a private jet. 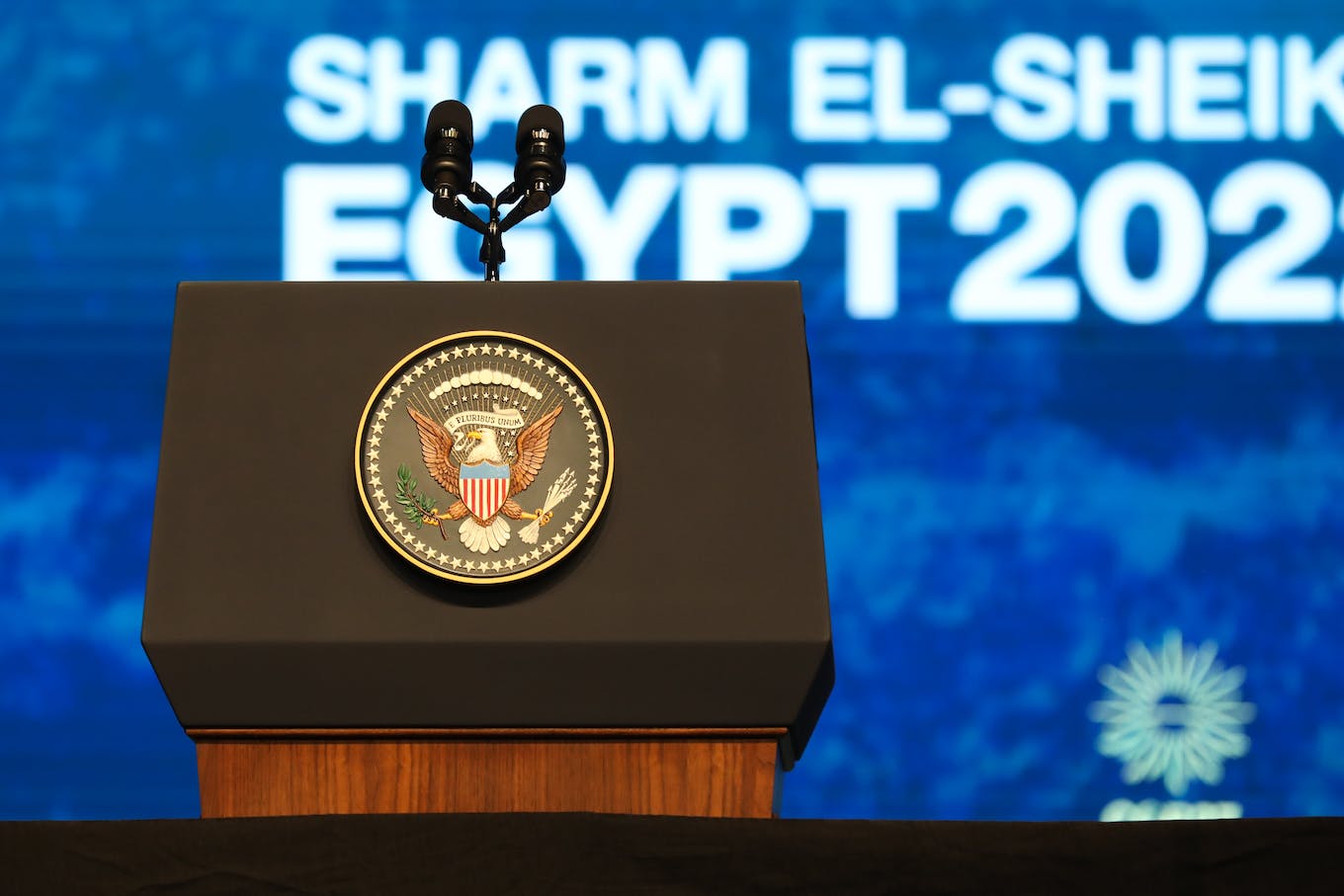 A podium adorned with the United States crest ahead of president Joe Biden’s speech. Image: Flickr/UNclimatechange.

“Here in Egypt, the Great Pyramids and the ancient artefacts stand as testament to millennia of human ingenuity.  We see our mission to avert climate catastrophe and seize a new clean energy economy not only as an imperative for our present and future, but through the eyes of history,” Joe Biden, president of the United States of America, said during his address to world leaders on 11 November, 2022.

He also announced a doubling of the United States’ contribution to a global adaptation fund to US$100 million, and a pledge of US$150 million to aid Africa’s climate adaptation. 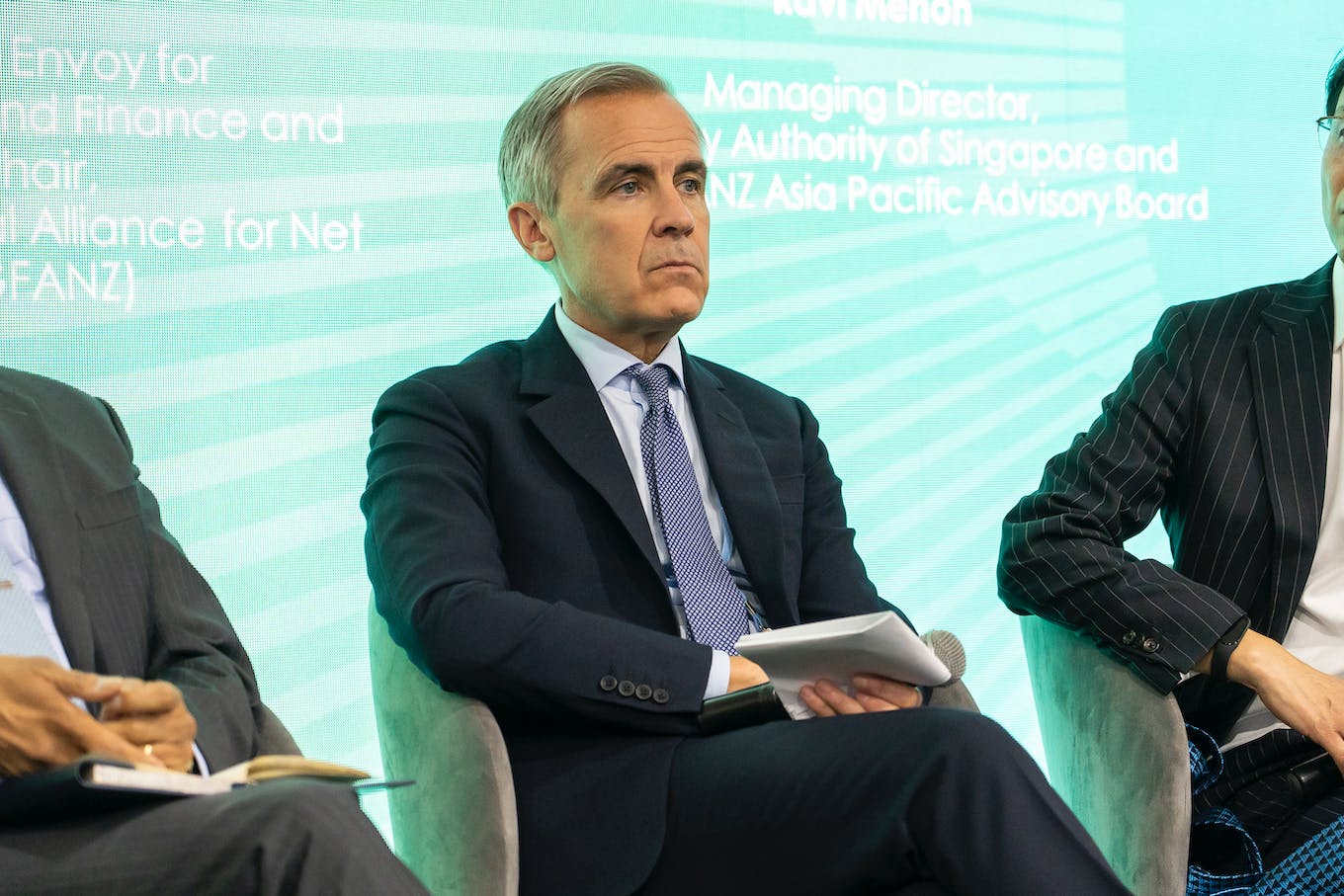 Mark Carney, the United Nations special envoy on climate action and finance, takes part in a panel discussion at the Singapore pavilion on the sidelines of COP27 on 8 November, 2022. Image: Eco-Business/Liang Lei.

Mark Carney leads the Glasgow Financial Alliance for Net Zero (GFANZ), a US$150 trillion-group of financial institutions working to decarbonise their portfolios. He called for more transition finance to help the Asia Pacific region get rid of pollutive coal power generation faster, during a panel discussion at the Singapore pavilion on 8 November, 2022.

However, he did not address GFANZ’s recent dropping of a requirement for new members to be part of the United Nations Race to Zero programme, which sets rules on how financial firms should report their decarbonisation progress and how they should work towards net-zero portfolios. Carney also declined questions from the media after the event. 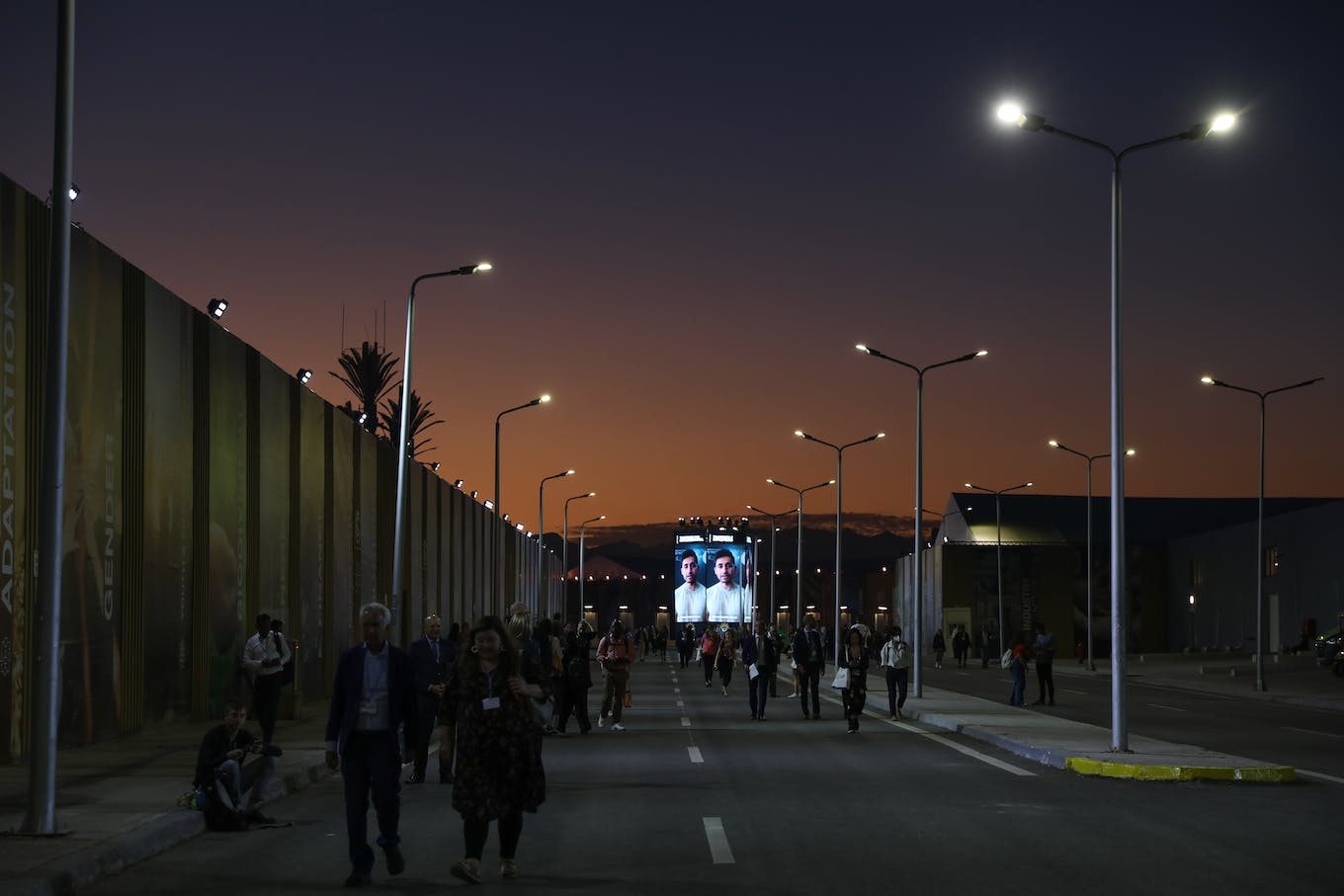 COP27 attendees leave the Torino Lamborghini International Convention Centre at Sharm El-Sheikh after the day’s events draw to a close on 12 November, 2022.