How do you solve a problem like food waste?

[Magazine Exclusive] No matter how you slice it, food waste is a huge problem that not only worsens climate change but also needlessly consumes precious resources. The good news is individuals and companies can do something about it. Here's how.

Here are the staggering statistics: As much as one-third of food produced globally for our dining tables is lost or wasted, according to the World Bank.

Developing countries lose an average of 120 to 220 kilogrammes of food per person per year, which means that even those in regions ridden with malnutrition, such as South Asia and Sub-Saharan Africa, lose as many as 400 to 500 kilocalories per person, every day.

No matter how you look at it, that’s a lot of grub simply being thrown away. Food waste – when produce makes it to the end of the supply chain but doesn’t get eaten – is a huge problem that contributes to billions of tonnes of greenhouse gases (the chief culprit behind global warming) and needlessly consumes precious land and water resources.

Some 7 per cent of all global greenhouse gas emissions, or 3.3 billion tonnes per year, are due to food waste, according to Waste & Resources Action Programme (WRAP), the UK government’s waste advisory committee.

All of these numbers are so shocking that the United Nations started a new global campaign Think Eat Save in January 2013 to combat food wasted by consumers, retailers, and the hospitality industry.

A similar programme can be started pretty easily here in Asia, says Dr Md Saidul Islam, assistant professor of sociology at Singapore’s Nanyang Technological University. He’s an expert on the global food system and how the food supply chain affects the environment.

“On a global scale, the annual production of food can feed about 10 billion people (currently we have about 7.3 billion); however, about 30 per cent of these foods are wasted and more than 50,000 people are dying every day because of poverty and poverty-related disease,” he says. 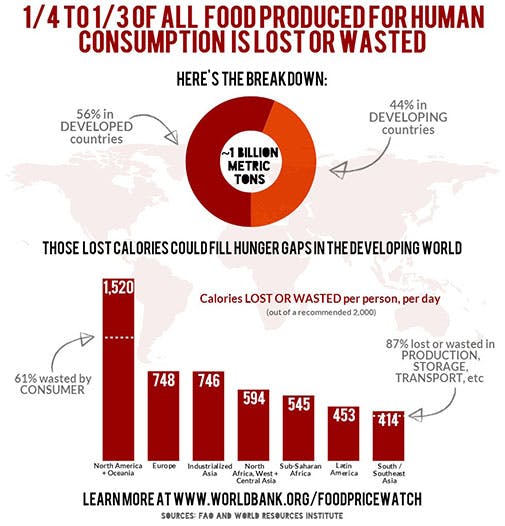 In developed Asia, the main culprits behind food waste are households and trade premises like retailers, restaurants and supermarkets.

In Singapore, for example, about 796,000 tonnes of food was wasted in 2013. That’s one person throwing away 730 bowls of rice in one year - and half of that is generated by households, according the city’s National Environment Agency (NEA).

In developing Asia, a third of the food waste comes from the agricultural sector’s processing, storage and delivery activities, according to the Food and Agriculture Organization.

Addressing the food waste issue in Asia, therefore, has to start with local and domestic solutions. In Hong Kong, where 36 to 40 per cent of the daily trash collected is food, the Environmental Protection Department has been working to cut food waste, focusing on what it calls the “source” - that is, educating the public about the seriousness of food waste and how to reduce it.

Legislation is also pretty patchy in the region. Many countries do not have national regulations guiding food waste. Most efforts are either regional or provincial, or piecemeal. For example, Hong Kong is opening two new bio-waste plants in the next two years, and there are companies collecting leftover food from restaurants, hotels and supermarkets, but there isn’t any city-wide legislation requiring businesses to treat food waste properly.

However, this is slowly changing. Campaigners are pushing governments to change this. China is in the process of hammering out a set of laws on food waste and Singapore is due to announce more comprehensive regulations this year.

Thailand, where food and wood makes up about 60 to 70 per cent of total waste collected, is putting together a national biomass policy.

So what can consumers and businesses do? Here’s a quick how-to guide.

Buy what you need, only when you need them. It’s really as simple as that. In urban centers in Asia, the main reason behind food waste is that people buy more food than they eat.

So, plan meals, use shopping lists and avoid impulse buys. Once you get home, store and handle food properly. Cook just enough for the people having the meal.

Also, there is no reason you shouldn’t buy “ugly” food. They are perfectly healthy, but large quantities get thrown away by supermarkets.

Every community has food shortage. So, it is not a problem of shortage; it’s a problem of access and redistribution. So there should be robust mechanisms, viable policies, and adequate infrastructures for “food redistribution” so as to reduce food waste.

This may change soon: In Australia, chains like Woolworths are already selling “blemished” food at discounts. This practice can be easily adopted relatively quickly and may indeed spread to other parts of Asia.

If you run a food and beverage business, consider changing the way you store and how you package your items.

Small practical changes, such as lowering the temperatures of refrigerators or designing better packaging, can make a big difference in preventing spoilage.

About 25 per cent of food waste in the developing world could be eliminated simply with better refrigeration equipment, WRAP says.

Vietnam uses Modified Atmosphere Packaging (Map) – a technology that substitutes the atmosphere inside a package with a protective gas mix, typically a combination of oxygen, carbon dioxide and nitrogen – to extend food freshness.

This technology forms part of the country’s “Sustainable Product Innovation Project” funded by the European Union. Through the project, Map has been applied to over 1,000 small-scale farmers, resulting in reductions in post-harvest food waste from 30-40 per cent to 15-20 per cent, the Guardian reported.

Hate potato skins? Can’t stomach wilted vegetables? No worries but no tossing, please! Just start a compost pile under your sink and convert food waste like egg shells, old biscuits and bread, banana skins and tea bags (as well as that wilted cabbage) into something useful.

This waste can be recycled into a good quality soil improver or fertiliser. In some countries, it can even generate electricity that can be fed back into the national grid in the form of biomass.

Thailand, Indonesia, Malaysia and the Philippines all have introduced feed-in tariffs to encourage biomass energy production, so there’s a growing market for food waste to turn into something useful. There’s also the option of recycling food into new products or animal feed, especially in Asia.

“This is one of the most important mechanism by which we can recycle food waste,” Islam says. “It’s very realistic, as some farmed animals such as pigs can eat almost all food waste.”

Again, if you’re a company that deals with food, you may want to find out exactly how much food gets thrown away by your employees. Green Future Solutions, a sustainability consulting company, says that one of the biggest hurdles to recycling food in Asia is actually a lack of information.

In Singapore, the NEA has made reporting of waste and recycling data mandatory starting this year. About 250 shopping malls and hotels will need to report the weight of waste discarded and that channelled for reuse and recycling, broken down by type, such as paper, metals and food. Companies must also submit waste reduction plans.

Give to local food bank and charities; in Singapore, non-profits such as Food Bank Singapore, Food From the Heart, and Willing Hearts receive donations from individuals and businesses and redistribute to the needy. In Hong Kong, local organisations do the same.

“Every community has food shortage. So, it is not a problem of shortage; it’s a problem of access and redistribution. So there should be robust mechanisms, viable policies, and adequate infrastructure for “food redistribution” so as to reduce food waste,” Islam says.

Read the rest of the Eco-Business Magazine here.