Rural and poor, Cambodia is one of the world's most threatened countries by climate change. How is the country's critical agricultural sector adapting to increasingly severe, unpredictable weather events?

A sprawling patchwork of paddies cover the majority of Cambodia, where agriculture has been one of the main economic pillars for centuries. As experts predict local farmers will be among the worst hit by climate change, drastic measures are being undertaken to adjust to the impacts.

In spite of fast development, urbanisation and economic growth, almost 80 per cent of Cambodians live in rural areas, with about 45 per cent of the labour force directly employed in agriculture, according to the World Bank. This, coupled with large swathes of the population living in poverty or close to the poverty line, makes Cambodia particularly vulnerable. The 2018 global Multidimensional Poverty Index reveals 35 per cent of Cambodians live in poverty, with a further 21.1 per cent vulnerable to poverty.

“Cambodia has one of the highest degrees of vulnerability,” says Nick Beresford, United Nations Development Programme (UNDP) county officer. “There is a huge gap in adaptive capacity, particularly in rural areas where a large majority of the population live and a large number are dependent on farming or agricultural-related activities.”

The agricultural sector has been battered by weather extremes in recent years. The major flood of 2013 caused GDP to tumble by two percent and the widespread 2015-16 El Niño droughts led to yields drastically falling.

Cambodia has one of the highest degrees of vulnerability. There is a huge gap in adaptive capacity, particularly in rural areas where a large majority of the population live and a large number are dependent on farming or agricultural-related activities.

“Often with climate change, it’s a gradual change,” says Simon Mahood, senior technical advisor for WCS (Wildlife Conservation Society) Cambodia, which is working with farmers on a range of projects. “But it’s these extreme events that push farming families into doing something completely different.”

The El Niño drought caused the Tonle Sap’s fish stocks to drastically deplete and small-scale farmers harvested much smaller yields. This saw many migrate to urban centres to work in the country’s booming construction industry, or to neighbouring countries for employment. “They found for the first time they were able to send money home, so many ended up staying,” adds Mahood. 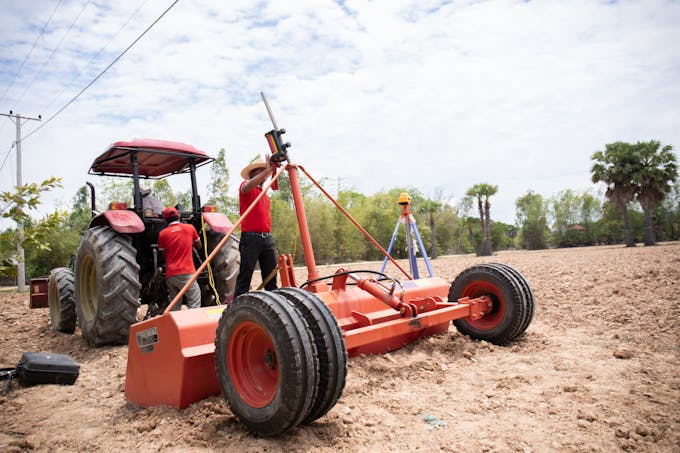 Agriculture is also a major contributor to climate change, making it vital farmers switch to more sustainable practices. A 2018 study by US-based Environmental Defense Fund reveals the levels of nitrous oxide and methane released from rice farms have detrimental effects on the environment. The main cause is rotting vegetation and excess flooding in unlevel fields.

One method being introduced to combat this is land levelling. Most fields in Cambodia are levelled manually, meaning there are huge variations in elevation – sometimes up to one metre between the lowest and highest points of a field. “This makes it hard to control the water level and rice matures at different speeds,” says Mahood.

WCS works with about 250 farming communities in Kampong Thom as part of the Sustainable Rice Platform (SRP) scheme, which tracks rice production compliance through a strict set of standards. As part of this, land levelling has been introduced.

Gary Ellem, team leader at Cambodia Agricultural Value Chain Program (CAVAC), which works to improve the productivity and income of small-hold farmers and increase milled rice trade, said his organisation is also championing laser land levelling. He explained: “This significantly reduces the amount of water and fertiliser required and can increase yields by up to 17 per cent, benefiting farmers and the environment.”

Rice farming also contributes to Cambodia’s loss of natural habitat. Protected areas are razed, and increasingly dry flooded forests burned to make way for farmland. Mahood said in the wake of the 2016 drought, about a third of the Tonle Sap’s sprawling flooded forest was torched and converted to agricultural land, causing a massive loss of fish and wildlife habitat. 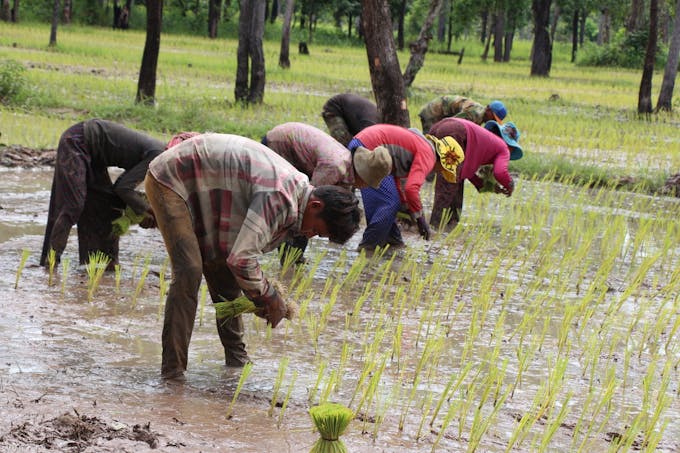 IBIS Rice is one organisation that aims to conserve Cambodia’s northern plains while giving struggling farmers a boost. It works with 1,000 farming families in national parks who adhere to organic farming practices, producing top-quality jasmine rice fit for export. Having received EU and US organic certification, the rice is sold in Germany, Canada and recently Singapore, via online grocery platform Redmart.com, enabling farmers to increase their income.

Nick Spencer, IBIS Rice CEO, noted a decline in yields in recent years due to adverse weather, adding diversification is key to combat the changing weather. IBIS Rice plans to expand the rice species it works with from jasmine to other types, such as sticky rice, as well as promoting cover crops to improve the structure and nutrition of the soil. The Cambodia Agricultural Research and Development Institute recently released a new climate resilient rice variety (Phka Mealdei) that is tolerant to both drought and flooding. Farmers are also being encouraged to plant alternative crops, such as mung bean and soy bean.

CAVAC is working with farmers to introduce a range of innovative methods to improve yields. For example, it is working with Agri Smart to introduce the locally-designed Eli Rice Seeder. This uses air pressure to push rice seed into wet or flooded soils and can reduce the amount of seed required by up to two-thirds, while increasing yields per hectare by up to 20 percent.

“Mobile phones are another area with potential to increase farmer incomes,” says Ellem. He cites a scheme that sees farmers use sensors to collect soil condition data, such as moisture and nutrition, that is analysed remotely. Diagnostic information and recommended actions are then sent to farmers’ phones. 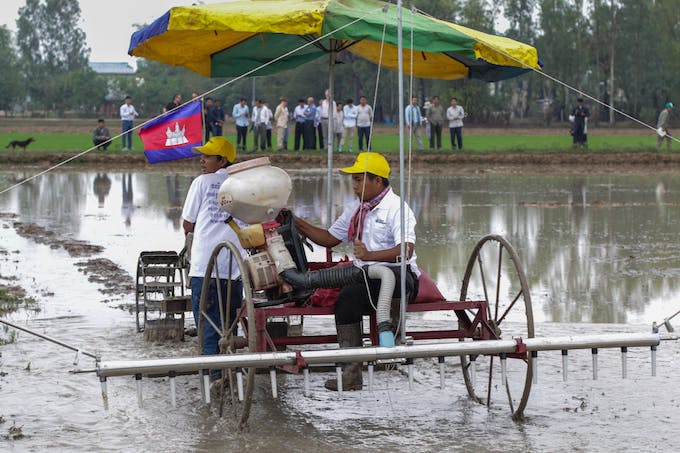 Elsewhere, the UNDP and the Cambodian government recently established 50 hydrology and meteorology stations across the country. Data collected from the Early Warning System is used to anticipate weather patterns, meaning farmers can better prepare for extremes. In January, Prime Minister Hun Sen issued drought warnings as the threat of another El Niño looms. During hot season, temperatures are expected to soar to 50C, with farmers advised to delay the rice production cycle, which traditionally runs from May to November.

A recent joint UNDP and government study warned at the current rate, by 2050 climate change will have directly led to Cambodia suffering an almost 10 per cent loss in GDP. This is a direct result of soaring temperatures reducing worker productivity and extreme weather impacting infrastructure and crops. However, it estimates two-thirds of damage can be avoided by investing in climate change adaption and climate smart infrastructure, meaning Cambodia’s agricultural industry is taking the necessary steps to ensure it continues into the future.