As Covid-19 cases in the territory break new records, Hong Kong's quarantine hotels are generating worrying levels of disposable plastic trash to feed, clothe and clean their guests. Many alarmed quarantinees say most of the waste is unnecessary and avoidable.

Three plastic lunch boxes, five to six plastic bowls, and multiple plastic bags: that’s the amount of waste generated not from a week of hotel quarantine meals, but in a single day, according to one Hong Kong woman. That’s in addition to a 1.5-liter water bottle every two days and myriad tiny plastic containers of shampoo, conditioner, and body wash.

Like almost everyone who has entered the city since the Covid-19 pandemic took hold in March 2020, Irene Yeung had to stay in a tiny hotel room for 14 days. Meals were left outside her door since she couldn’t step foot outside her room without risking six months in jail. Yeung did her best to reduce her plastic consumption by using reusable utensils. But that did little to cut into the huge volumes of plastic delivered to her door daily.

Quarantine hotels in Hong Kong have to serve meals in disposable containers because any dishes that go into a confinee’s room are considered potentially contaminated and can’t be reused. But Irene thought her hotel, Courtyard by Marriott, should have done more. “Plastic bags, boxes, and bowls are overused. It’s not [necessary] to use so many bags to wrap a meal,” she told Eco-Business.

Hope Lang, area director of operations for Hong Kong, Macau, Taiwan & Hainan at Marriott International, said that the hotel group is actively working to reduce the environmental impact of quarantine and has already replaced most disposable plastic food containers with biodegradable alternatives, but around 20 per cent of the rooms at Courtyard have meals provided by an outside supplier. Lang added that “efforts are underway” to phase out single-use cutlery and that tiny toiletry bottles will be replaced with larger bottles in July. Some Marriott hotels are also sending their food waste to O-Park, a facility that converts it into biomass, biodegradable material which can be used as fuel.

As Hong Kong grapples with record-high cases of Covid, the territory is tightening restrictions even as much of the world opens up. Since mid-March 2020, virtually all arrivals from outside the city’s borders have had to spend at least 14 days in a government-designated hotel at their own expense. That means the amount of waste generated by hotel quarantine has reached mind-boggling levels. 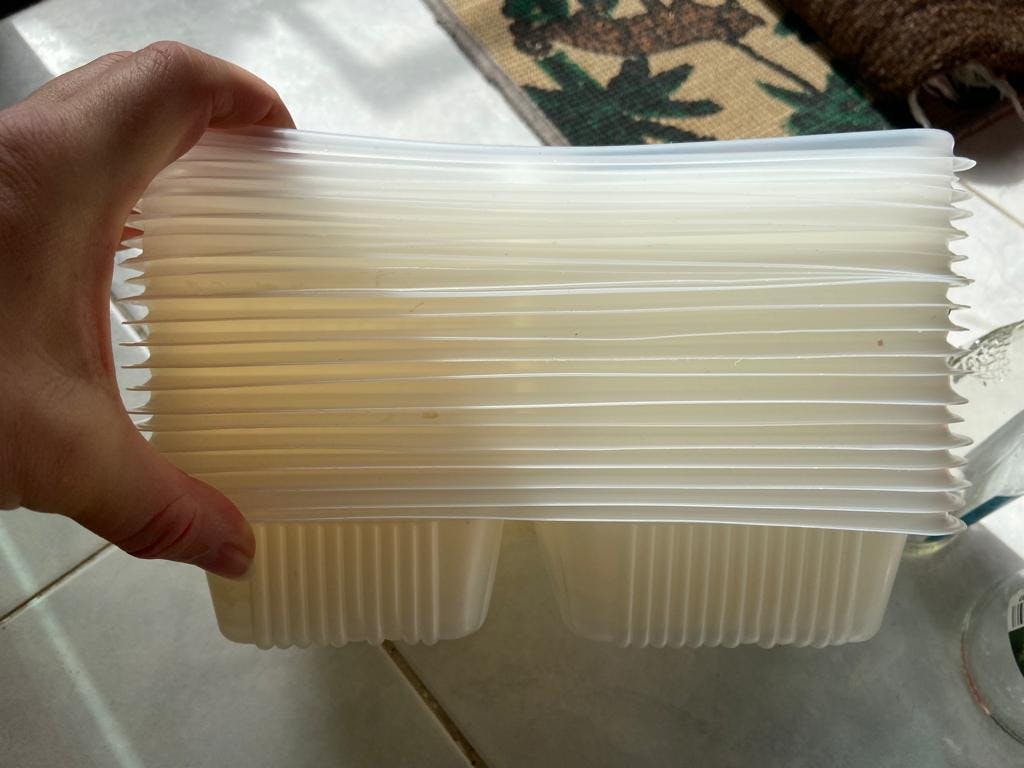 Though it’s difficult to measure the exact scale of the garbage, data from Hong Kong’s Civil Aviation Department reveal that since April 2020, around 850,000 people have flown into the city. Nearly all of them quarantined for at least 14 days and were served three meals per day. Edwin Lau, founder and executive director of non-government organisation The Green Earth, says many hotel meals come with as many as 10 disposable items. That could include food and drink containers, lids, utensils, and bags. All that would add up to nearly 360 million pieces of disposal packaging from 2020 to 2021 — and that doesn’t include trash from the quarantine facilities housing close contacts of confirmed cases.

Along with takeout meals, quarantine is driving a big increase in plastic waste in Hong Kong, according to Greenpeace. The non-profit estimates that plastic waste increased by nearly 6 per cent in 2020 to 2,312 tonnes per day, while plastic cutlery waste alone jumped by 33 per cent to 266 tonnes per day. Most of that went to the landfill –only 11 per cent of Hong Kong’s plastic waste was recycled in 2020.

Some quarantine hotels are trying to go plastic free. Facilities run by Dorsett Hospitality International and Ovolo Hotels offer reusable cutlery, and Dorsett guests have the option to use a Brita filter in lieu of water bottles. Like Marriott, Dorsett is also transitioning to biodegradable food containers, which Ovolo already provides.

Biodegradable bowls may not be an ideal solution for Hong Kong because the city lacks a biodegrading facility, so items still end up in the landfill where they can’t biodegrade properly, cautioned Sherry Fung, co-founder of Eco-Drive, a non-profit that advocates for a reduction of single-use plastic in Hong Kong.

But many hotels appear to be doing their best to cope with restrictive rules. Ovolo’s director of operations Sonesh Mool called on the government to change its stance on reusable dishes. “Disinfecting and cleaning all plates before reusing is sufficient to ensure there isn’t cross-contamination, and allowing us to do so would significantly reduce waste,” he explained.

Not all hotels are cutting down on waste just yet. Helen Norton, who quarantined in the Ramada Hong Kong Grand View, received piles of disposal supplies that included numerous tiny plastic toiletry bottles and around 10 pairs of plastic-encased slippers, which she called “ridiculous” and unnecessary for one person. Norton plans to donate the leftover toiletries to the homeless. The Ramada did not respond to Eco-Business’ request for comment. 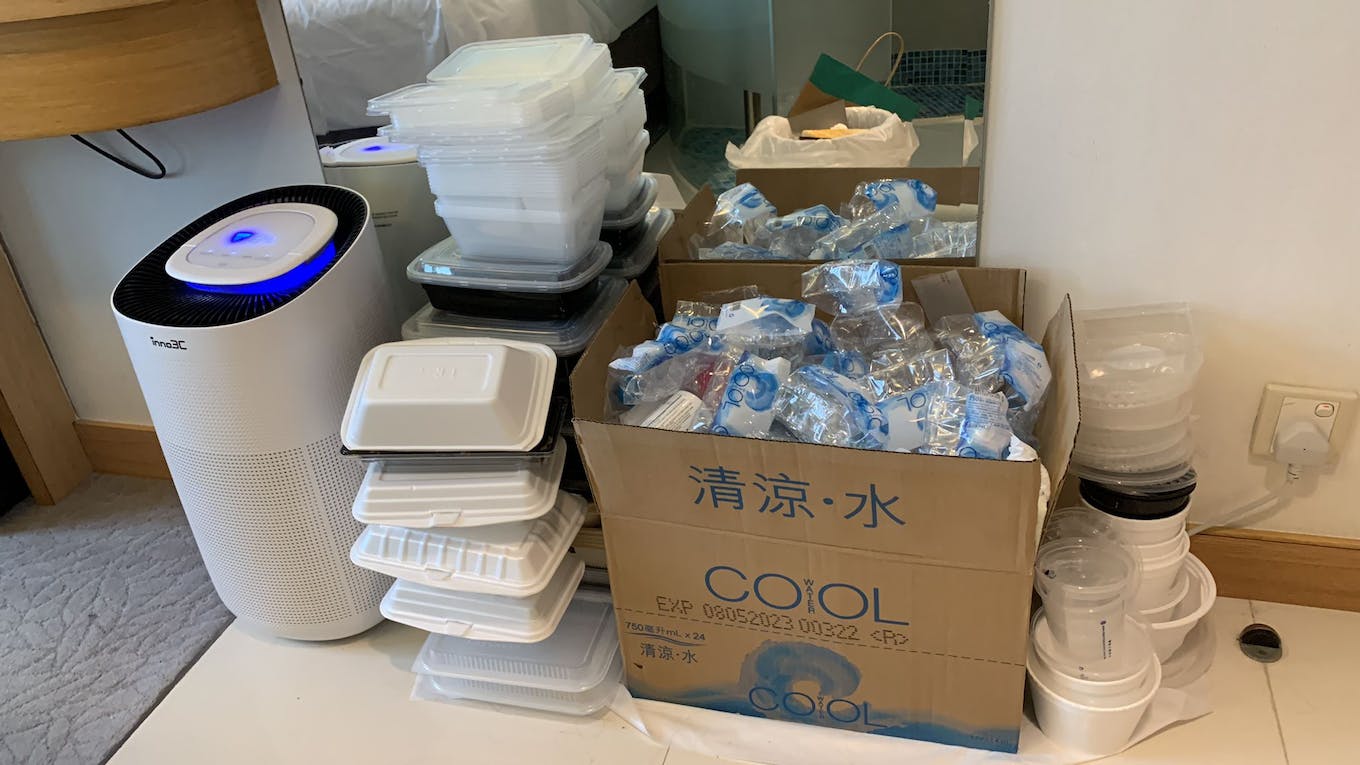 Fung says all hotels could reduce waste with a surprisingly simple solution – asking guests what they want. Do they really need those slippers? What about the 24 water bottles? “Hotels can do better by planning better,” said Fung. “Having options for people is key, because right now they feel like they have no options.” A pre-arrival questionnaire could avert waste and also help the hotels’ bottom line.

Even if a hotel doesn’t have that option, travellers can call ahead to decline disposable products, Lau said. Washing plastic containers and taking them to a government-run recycling facility after quarantine can also make a big difference, according to Fung. A Facebook group set up for people quarantining in Hong Kong, which has 75,000 members, reveals that a growing number of people are doing just that.

Still, Lau is disappointed that the Hong Kong government hasn’t done more to educate consumers and hotels about plastic waste, which enters marine organisms and ultimately ends up being ingested by humans. He encouraged environmentally-minded Hong Kongers to take to social media with their green quarantine tips and bring their friends on board. “​​People use social media to show off what they bought in a shop, but seldom do they use social media to show what they’ve done for the environment,” he said.

Quarantine waste isn’t a problem unique to Hong Kong. Mainland China, Japan, South Korea, Singapore, and Taiwan have all enforced strict quarantines and grappled with similar issues. Describing her quarantine in Taiwan, Yeung recalled that they used fewer plastic bags and avoided plastic containers. The situation in Hong Kong is also especially challenging because it remains one of the few places outside mainland China enforcing mandatory hotel quarantine for locals. Isolating at home, residents could prepare home-cooked meals.

If there is a silver lining to quarantine, it might be greater awareness of an often overlooked problem. “For most people, when they see [trash] piling up they would think twice about what they are doing,” said Fung.