Weaving the Sustainable Development Goals into national governance takes vision, collaboration, and methodology. Policymakers and experts from Asia and Europe meet this week in Stockholm to discuss the way forward.

Since they were signed into effect on September 25 last year, nations and organisations around the world have begun working to adopt the SDGs and turn them into action on the ground.

Embedding the 17 SDGs into day-to-day governance and measuring tangible progress is a difficult task for the government of a developed nation, which must identify the most pertinent areas for improvement aligned with SDG goals and channel resources towards them.

This is even more challenging for governments of developing nations that have fewer resources and needs that are more pressing. International cooperation and strong partnerships are therefore crucial to the achievement of the goals set for 2030.

To forge a better understanding of the issues at hand and new ways of collaboration, the Asia-Europe Foundation (ASEF) and the Stockholm Environment Institute are holding a conference on the SDGs, themed “Sustainable Development Goals for Asia and Europe: Delivery Options for Agenda 2030”.

Policymakers and development experts from Asia and Europe will gather on October 19 to 20 in Stockholm, Sweden for knowledge exchange, country presentations by Asia-Europe Meeting member states, and plenary discussions on SDG implementation.

The event is supported by Asia-Europe Environment Forum (ENVforum), which has in the run up to the forum published the “Implementation Guide for the Sustainable Development Goals”.

Planning for the SDGs

Aiming to help countries design their own form of SDG Implementation, the guide provides useful frameworks and guidelines for assessing existing targets and transitioning from the MDGs to the SDGs.

Another highlight is the 10 case studies of countries including the Philippines and Cambodia that serve as examples of how to establish programmes to integrate the SDGs at a national level.

The idea is not to start from scratch by redesigning national plans, but simply to look at the existing national agenda alongside the SDGs in order to identify areas of clear alignment.

Furthermore, while the MDGs took a “one size fits all” approach, its successor the SDGs allow countries to choose individual targets that are best suited to local conditions, as the guide makes clear.

This does not mean that member states that have adopted the 2030 Agenda need to create a national target that aims for a comparable maternal mortality ratio. “Depending on initial conditions, a given country may set the target at a different level that is appropriate and realistic,” write Dara Lee and Jennifer Moreton, authors of the guide.

One case study in the guide is Cambodia, which had adopted a localised set of goals in 2003 based on the global MDG framework and made significant progress, coming close to meeting poverty reduction targets.

However, Cambodia’s success with the MDGs brought about two main challenges.

Firstly, its economic growth came at a considerable expense to the environment. Secondly, Cambodia’s growth into lower-middle income country status meant that access to funding to implement the SDGs after 2015 was no longer so straightforward.

Despite reworking its budget strategies to free up domestic funds to channel towards the SDGs, the government found the amount of money available to it remained inadequate.

As such, global partnerships and securing international development financing are key to unlocking the SDGs in Cambodia, said the authors of the guide.

To lay out an action plan, the Cambodian government launched the Climate Change Action Plan (CCAP) 2016-2018  in January this year outlining the specific projects to be put in place, the SDGs they would address, the results sought, estimated funding required, and possible sources of funding for the projects. 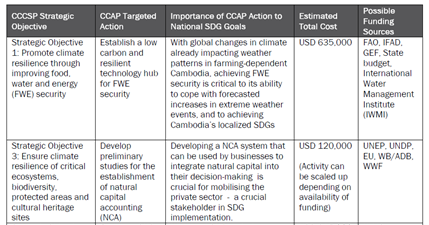 What Cambodia has done to map the estimated costs and possible funding sources required for taking action against climate change helped it align its SDG implementation plans with funding abilities, the first step in implementing SDGs nationally as recommended by the authors of the guide.

This guide, published by ASEF, is one in a series of publications on the SDGs by ENVforum, a platform for exchange between Asia and Europe on the topic of sustainable development that conducts research, holds capacity-building workshops for government officials, and organises conferences related to the area of the SDGs.