Healthcare emissions harm the planet, and this boomerangs and harms health. To escape this vicious cycle, we need more energy efficient hospitals, low-carbon medical products, and only the necessary medical procedures.

CO2 emissions from healthcare in the world’s largest economies account for about 5 per cent of their national carbon footprints, according to a new study.

While healthcare emissions have rarely been assessed in isolation, the analysis suggests that in most countries they are only surpassed by those from the heaviest polluting sectors, related to energy, transport and construction.

The research found that the combined emissions from hospitals, health services and the medical supply chain across the OECD group of market-based economies, as well as China and India, make up around 4 per cent of the global total. This is a larger share than either aviation or shipping.

In their new paper, published in Environmental Research Letters, a team led by scientists at the Potsdam Institute for Climate Impact Research in Germany present the first comparable estimates of healthcare-related CO2 emissions for these countries.

We are quite used to being advocates for the public’s health in a whole range of different domains. We are adding one additional threat that we are responding to: climate change.

Climate change and medicine are inextricably linked, with rising global temperatures associated with everything from the spread of infectious diseases to the impact of dangerous weather events. Scientists have described this interplay as “the major threat of the 21st century” to human health.

According to the authors, not only does their analysis highlight healthcare itself as a  “significant cause” of the emissions driving these changes, it also reveals the potential to make key improvements that not only cut emissions, but could also improve public health.

Healthcare is a major component of the global economy, with OECD nations spending an average of 9 per cent of their GDPs on it. Ageing populations, rapid medical advances and the rising prevalence of lifestyle-related diseases all mean this expenditure is expected to grow in the coming years.

As this energy-intensive sector develops, the Potsdam team say it is reasonable to expect its emissions to grow as well. However, despite efforts by the likes of the Lancet Commission on Health and Climate Change to promote the tracking of healthcare emissions, they note the subject has received little attention from the wider research community.

So far, England (although not the rest of the UK) is one of only four nations that has undertaken an analysis of the greenhouse gas footprint of this sector specifically, with a series of reports carried out by the NHS Sustainable Development Unit.

Prof Helga Weisz, one of the scientists behind the new paper, attributes this scarcity in part to the “popular misconception” that service sectors, such as healthcare, have negligible emissions because they do not produce material goods.

The authors say this has led to the significance of these emissions being overlooked, as they have simply been broken up and factored into the study of other sectors instead.

To undertake their analysis, the team gathered expenditure data from every area of the health system, including public and private hospitals and emergency, long-term and preventative care, as well as medical retail and the construction of hospitals and other infrastructure.

They fed this data into a model to calculate an overall “health carbon footprint”, accounting for all the CO2 emissions occurring along the global supply chain of each healthcare system. Team member Dr Peter-Paul Pichler explains their comprehensive approach to Carbon Brief:

“We applied the health care sector definition of the OECD system of health accounts, which is quite comprehensive…To be honest, we do not think that we left out any significant part that people might think of being related to health care.”

The relevant data is not collected for every OECD nation every year. However, the team was able to cover all of those included in the then 35-member organisation, apart from Chile, for at least some of the period between the years 2000 and 2014 (Lithuania joined in 2018, bringing the total to 36).

In addition, given their size and global significance, the researchers included India and China in their analysis, using healthcare expenditure data provided by the World Health Organization and World Bank.

Between them, the nations considered by the paper accounted for just over half the world’s population and about three quarters of global GDP in 2014.

The authors found that the healthcare sector took up on average 5.5 per cent of each nation’s overall emissions in 2014 – the most recent year in their sample.

On average, over the course of that year, 52 per cent of these emissions were domestic, with the rest produced in foreign countries along the supply chain. For some nations, notably China [see chart below] the vast majority of emissions were produced domestically.

The relative dominance of healthcare was mainly a reflection of the nation’s wealth and population size, with the Netherlands, US, Belgium and Japan directing the highest share of their GDP towards it. 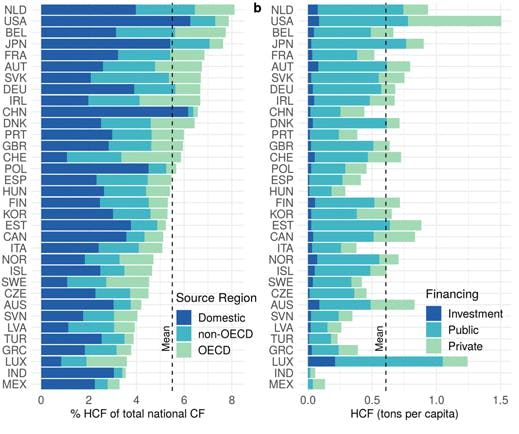 Combining all the countries together results in 1.6Gt of CO2 in 2014. This means their combined healthcare sectors alone were responsible for 4.4 per cent of the global total that year. Weisz says that while 2014 was the most recent year they analysed, healthcare emissions may have risen even more in prominence since then:

“Note that the last year of our study is 2014. Since then, national total CO2 emissions have been increasing in many OECD countries – e.g. in Austria, France or Australia – and, with them, likely also the emissions of the healthcare sector.”

The researchers compared each nation’s health expenditure, health footprint and CO2 intensity of the health sector over the 15-year period they studied. They found a group of 15, )mainly European) nations had effectively decoupled healthcare investment from emissions, with the former rising steadily while the latter declined.

According to Weisz, these nations have switched to cleaner energy systems and cut overall energy use since around the time of the global financial crisis in 2008 – and this goes some way to explaining this trend:

“Without having investigated this systematically, we think it is plausible to conclude that the health carbon footprint simply follows the national/EU trend in the national/EU portions of their supply chains, as most CO2 emissions, ultimately, occur in the energy sector. It is, nonetheless, also a surprising result because for the carbon footprints of entire national economies, we do not see such a decoupling trend.”

A second group of nations, including the US, Australia, Canada, South Korea, Japan and India achieved some decoupling, with emissions still rising, but at a slower pace. The final group consisted of China and Turkey, where carbon footprints are increasing even faster than health spending.

Health carbon footprints per capita in 2014 for China, India and OECD countries (not including Chile). Source: Pichler et al. (2019).

There was insufficient data from the 15-year period to establish a trend for the UK, Ireland and New Zealand. However, Dr Nick Watts of University College London, who leads the Lancet Countdown on Health and Climate Change and was not involved in the new study, tells Carbon Brief that the UK’s National Health Service (NHS) has made some “pretty dramatic” reductions since the implementation of the Climate Change Act in 2008, “on the background of an enormous increase in healthcare activity”.

The authors note that to achieve the 1.5C ambition of the Paris Agreement without negative emissions technologies, all sectors must achieve zero emissions by around 2050.

With the health carbon footprints of China and the US outranking most countries in terms of overall emissions, they emphasise the need to address this sector in order to achieve international targets.

They also note that their analysis shows the domestic energy system of a country to be by far the biggest influence on a country’s health carbon footprint. This makes sense considering the health sector’s carbon footprint generally mirrored overall emissions from that nation – and, predictably, means decarbonising the energy system will go a long way to decarbonising healthcare.

However, the researchers also say their modelling helps make the case for various sector-specific strategies for cutting emissions.

Among these are more energy efficient hospitals, choosing low-carbon medical products with minimal packaging and avoiding unnecessary medical procedures as much as possible.

According to Weisz, one of the biggest misconceptions about cutting emissions from the healthcare sector is that doing so would undermine service provision. In fact, their paper identifies a variety of improvements that could be made to health services that would also benefit public health.

Watts commends the conclusions reached by the Potsdam team and agrees with their conclusions. He says while the first priority in medicine should always be human health, there is “a lot of inefficiency” in the healthcare system that can be targeted, bringing a suite of benefits. He tells Carbon Brief:

“One of the things the paper highlights is that there are loads of different, really positive, really accessible ways of doing that. There are some nice ways of meeting your commitments under the Hippocratic oath, including patient satisfaction and quality of care, while also reducing your emissions.”

The kind of improvements discussed by the authors include cuts to unnecessary tests and over-prescription of pharmaceuticals, as well as an overall reorientation from curative to preventative healthcare. They also note societal changes, such as a transition to diets that are lower in meat and increased physical activity replacing cars as changes, that would cut both disease prevalence and emissions.

Weisz points to the US opioid epidemic and antibiotic resistance as problems emerging from the current, inefficient approach. According to Watts, those working in the health system should also start to bear climate impacts in mind as a part of their activities:

“The doctors, nurses and health professionals that work in those places have taken an oath to first do no harm and we know that some of that practice is doing harm. It’s obviously not a call then to immediately shut everything down and stop it – there is some inevitability here – but there is a responsibility here to reduce those emissions where you can.”

While Watts acknowledges a degree of pushback from some healthcare workers when attempts are made to push these issues to the top of the agenda, for the most part he said these ideas – and the accompanying public-health benefits – tend to be welcomed. Medics, he says, already deal with big overarching issues that affect people’s health, such as obesity and tobacco, and tackling emissions is just another component.

“We are quite used to being advocates for the public’s health in a whole range of different domains. I think the new part isn’t the idea that we are stepping outside, it’s just that we are adding one additional threat that we are responding to: climate change.”