The Singapore bank's 'More like an eco-warrior, less like a bank' tagline did not sit well with critics, who said a social media post promoting the bank's decision to quit coal by 2039 was greenwashing. The criticism drew a response from the bank's CEO Piyush Gupta.

A major Singapore bank has been called out for greenwashing by climate investors after promoting itself as an “eco-warrior” in a marketing campaign.

The bank’s claim was based on its commitment to withdraw financial support for the coal sector by 2039 — 17 years from now, which critics say is indicative of how some financial institutions have been delaying crucial climate action.

DBS Bank, Southeast Asia’s largest financial services group, pledged to stop financing customers that derive more than half of their revenue from thermal coal by 2026, and completely stop coal lending by 2039 in April last year. 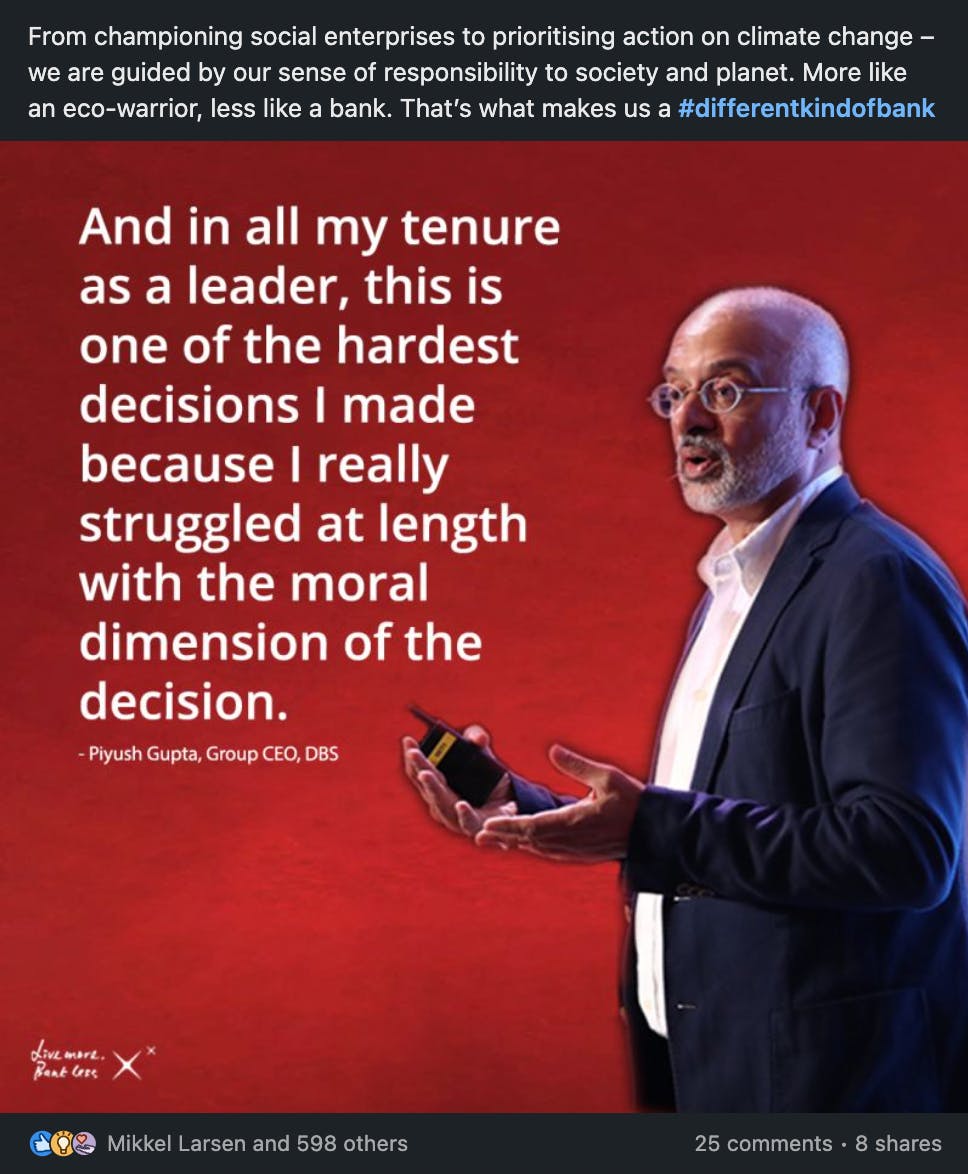 DBS CEO Piyush Gupta’s speech at the Bloomberg Sustainable Summit on 28 July, quoted in a post by the bank on LinkedIn on 31 July [click to enlarge]. Image: DBS on LinkedIn

In a post to its more than 750,000 followers on professional social media platform LinkedIn on Sunday, DBS quoted the company’s chief executive Piyush Gupta over the bank’s decision to stop coal lending in a widely-reported speech he made at the Bloomberg Sustainable Summit on 28 July.

The India-born CEO said the decision to quit coal was one of the hardest he has ever made, because of the “moral dimension” of withdrawing funding from an energy source that could provide electricity to people in Asia who live without it.

“I’m going to … make a moral judgement that electricity use is less important because the planetary considerations are more important,” he was quoted as saying.

The post ended with a variation of DBS’s current “Less like a bank” advertising campaign slogan: “From championing social enterprises to prioritising action on climate change — we are guided by our sense of responsibility to society and planet. More like an eco-warrior, less like a bank.”

The marketing push is part of its latest brand campaign, launched this month to push the message that DBS is a purpose-led bank that defies convention.

The post was first questioned by Steve Melhuish, the founder of real estate website PropertyGuru, who is now an impact investor. “‘More like an eco-warrior, less like a bank’. Seriously?! What greenwashing hogwash (D)BS! ‘zero thermal coal exposure by 2039.’ No worries… let’s wait for another two decades, and hope climate change doesn’t get worse in the mean time! We need to act NOW, not push the can further down the alley and hope others will tackle the problem,” he wrote in its comment thread.

The sharp criticism drew a reaction from Gupta. Responding to Melhuish on LinkedIn, Gupta countered that DBS no longer funds coal projects, and that the 2039 date refers to when the bank’s current loans are repaid. “My point [in the speech] was only that these decisions are very difficult to make… ask the Europeans who are struggling with energy security today,” he said.

Melhuish conceded that while making decisions as a CEO is hard, “justifying thermal coal funding on the back of climate or social justice and claiming to be an eco-warrior is highly questionable.”

Su-E Yap, a climate investor and former economist with the Monetary Authority of Singapore, said that if DBS was truly driven by environmental consciousness, it would look into how to retire coal plants in Asia, which the Asian Development Bank has been exploring with British insurer Prudential, invest more in carbon capture technologies, and find ways to help bring down the cost of switching from coal to renewable energy in Asia.

“Instead what is outlined in this post is a false dichotomy. Let us not kid ourselves, there is plenty of funding for entrenched fossil fuel interest,” she said. “How much has DBS funded community solar projects relative to coal? That is where you can make a difference. And besides, for crying out loud, there is money to be made. Be brave. Stop the greenwash.”

She had earlier commented on DBS’s post, equating thermal coal investments as a pathway to climate justice as a “whole new level of low”.

“I hope this was the work of an ignorant, errant speech writer (and social media officer) rather than real and true opinions held by DBS leadership and Piyush Gupta. Truly shocking.”

DBS emerged as Asia’s leading bank for climate action in a March study that found that the region’s lenders have responded to the climate crisis mainly by launching sustainable finance products rather than divert capital away from carbon-polluting industries.

DBS, part of the United Nation’s Net-Zero Banking Alliance, has committed to achieve net-zero emissions in its lending portfolio by 2050, although its current target is not aligned with the Paris Agreement on climate change. Currently, not a single bank has coal power policies that are fully aligned with the Agreement.

When DBS pledged to exit coal by 2039 last year, it became the first Singapore-based lender to commit to a timeline for its shift away from the fossil fuel, which is the world’s largest source of human-caused greenhouse gas emissions.

Observers called the commitment “an act of finance industry leadership for Southeast Asia” as it showed the bank was aligning with global decarbonisation efforts from the financial services industry.

However, the policy could be implemented faster and the bank’s progress on growing its renewable energy exposure was insufficient, commented Tim Buckley, director of energy finance studies, Australasia at the Institute for Energy Economics and Financial Analysis (IEEFA), a thinktank.

According to IEEFA, more than 150 major global financial institutions now have coal exit policies in place, as pressure grows on banks to shirk fossil fuel finance as the climate crisis intensifies.

In an interview with Eco-Business in 2019, Maarten Biermans, head of sustainable capital markets for Dutch lender Rabobank pointed out that the longer banks resist pressure to quit coal, the more money they will make, as the cost of financing ever-riskier coal plants rises.

Disclosure: Steve Melhuish, who is mentioned in the story, is on the Eco-Business international advisory board and is a strategic investor of the platform