The lending policies of Asia’s major banks are “falling short” of national plans to reduce carbon emissions and meet global pledges to tackle climate change, according to a study by a Singapore-based research firm Asia Research & Engagement (ARE).

The region’s big banks have responded to the climate crisis by launching green or sustainable finance products. But they have lagged in diverting capital away from carbon-intensive industries or addressing climate change through governance, risk management, or policies, the study titled Banking Asia’s future: How to align with national climate plans found.

“This raises concerns of greenwashing: that banks are seeking a marketing benefit for sustainable finance deals while providing higher levels of finance to dirty industries,” the report said.

Asia’s banks are key to the transition of the region’s energy systems away from planet-heating fossil fuels. Asia consumes about 80 per cent of the world’s coal, and the region’s banks have increased their funding of the sector in recent years as the region tries to meet rising energy demand.

None of the 32 banks that sit in East and Southeast Asia in ARE’s study have coal policies that fully align with the Paris Agreement on climate change, which stipulates that global warming cannot exceed 1.5 degrees Celsius if the worst consequences of climate change are to be avoided.

Only six banks have policies to phase out coal lending, despite this being a clear requirement for national net-zero plans while only 13 had policies banning the financing of new coal-fired power. The International Energy Agency has warned that no new coal plants can be built if the world is to achieve net-zero emissions by 2050.

Only nine banks in the study have long-term net-zero commitments for financed emissions.

Banks are seeking a marketing benefit for sustainable finance deals while providing higher levels of finance to dirty industries.

Banking Asia’s Future: How to Align with National Climate Plans

Three of the worst performers in the study are Chinese banks. China has pledged to achieve peak carbon emissions before 2030 and be net-zero by 2060, but none of China’s banks have aligned their climate policies with their country’s national targets.

The study’s best performer was Singapore’s DBS Bank, which has committed to net-zero financing and has a plan to phase-out coal lending by 2039. Singapore recently upgraded its national climate policy, and is now aiming for net-zero emissions “by or around” 2050. All of Singapore’s big three banks have net-zero targets, but none have published interim targets.

DBS told Eco-Business that it would be publishing interim targets in the second half of this year, and that its short and medium-term plans are detailed in its latest sustainability report. The bank added that it committed to a net-zero target “only after we had some milestones, as well as line of sight towards a viable course of action that is constructive and impactful.” 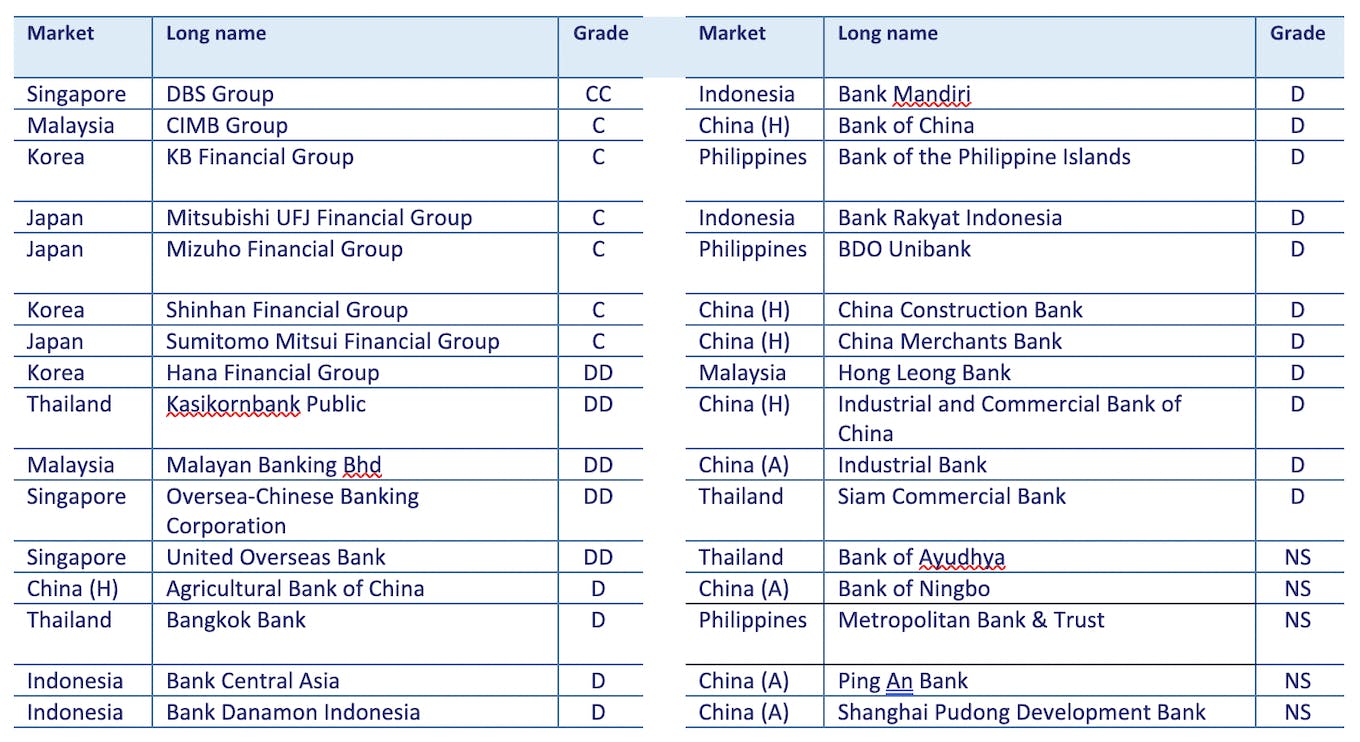 Asia’s major banks graded on climate policies. The grades range from A (the bank has a clear Paris aligned net-zero strategy and is implementing interim plans with credible roadmaps for high carbon sectors) to NS (the bank has barely started its journey and may not fully acknowledge climate-related risks). Source: Asia Research & Engagement

None of the banks in the study have any restrictions for gas-fired power, which is being promoted in the region as a necessary bridge fuel in the energy transition.

Inaction from the region’s banks “leaves banks exposed to reputational risks, and to clients that may face regulatory headwinds, criticism for carbon-intensive production systems, and competition from new technologies,” according to the report’s authors.

Asia is at risk of losing nearly 26.5 per cent of its GDP to severe climate change effects by 2050 if no action is taken to rein in emissions, according to calculations made by Swiss Re Institute.

ESG funds representing more than US$1 trillion in assets were stripped of their sustainable tag last month by investment management firm, Morningstar. A forensic analysis found that more than 1,200 funds, roughly one in five, were not delivering on their stated sustainability goals. The purge raised concerns about systemic greenwashing in financial products that are touted to do the planet good.

Asia’s banks were found to use the word “sustainability” in corporate filings more than any sector in any other region, according to a study by research firm GlobalData last year.