For more liveable cities, take a leaf out of nature's book

To bring nature back into our cities, we should look at the lessons she has to offer us, said speakers at the International Green Building Conference 2017.

The Eden Project conservatory in Cornwall, England is known for its diverse collection of plant species from various climates as well as its distinctive architecture. Less known is the fact that inspiration for the white, hexagon-tiled domes was drawn from pollen grains.

Architects needed a design to suit the location, which was still being mined during development, and so took a leaf from nature’s playbook and used hexagons, said Dr Anuj Jain, the co-founder of the Biomimicry Network Singapore, during a presentation at a conference on green buildings in Singapore yesterday.

“There are hexagons everywhere in nature, from honeycombs to pollen grains, and they form a beautiful and efficient structure,” he told the audience. The hexagons allow the maximum amount of daylight to enter the domes to reach the plants growing inside the structure.

Jain’s organisation teaches the principles of biomimicry, the imitation of nature’s systems and processes to solve complex human problems.

The trained engineer and ecologist was speaking about the concept’s application for the building and construction industry in the session titled “Beautiful ideas to change the world” at this year’s International Green Building Conference 2017.

Speaking to Eco-Business after his talk, Jain said that every building is essentially an ecosystem with various systems working together and nature offered lessons for each one, whether that is water, energy or waste.

One sustainable idea for the industry is to construct for disassembly, so that parts of buildings can be replaced individually when they wear out, he suggested.

Asked how Singapore’s built environment can benefit from biomimicry, he suggested that developers build according to the topography of the landscape. A building in Bukit Timah hill, the highest natural point in Singapore, is designed in exactly the same way as a building located in the coastal area of Changi, but in nature you see different species living at different elevations, he pointed out.

From garden city to biophilic city

Speakers at the session noted that Singapore is evolving into a biophilic city; one where nature is integrated into the city.

But creating a biophilic city is not simply be about adding plants to an urban environment; it must make the overall environment a better place for people to live in, said Jain.

Fellow panellist Leong Tatt Man, director of Singapore-based landscape architecture firm Tierra Design, noted that Singapore has moved from the idea of being a “garden city”—introduced in 1963 to encourage a cleaner and greener environment—to a “city in a garden”, and is now transforming itself into a biophilic city. “We have to go beyond the first two phases because they required a lot of manual labour, which is expensive,” he said.

Leong explained that a biophilic city is also one that has plentiful greenery, has an efficient water management system, and hosts communal spaces for people to interact in and enjoy. It is also very walkable and have fewer cars on the roads.

The company was behind projects such as Changi Airport Terminal 3 and its eye-catching wall of greenery, the Lee Kong Chian Natural History Museum, and Marina Barrage. 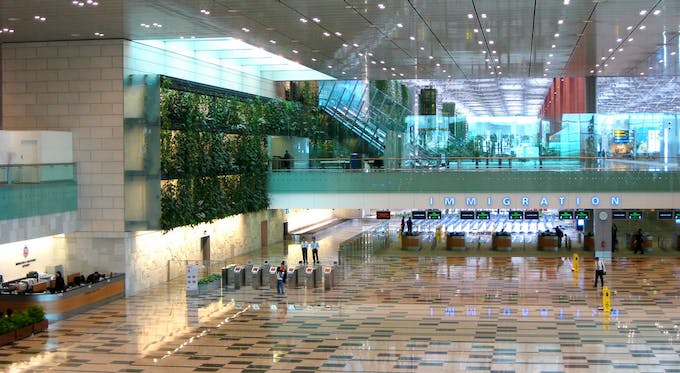 Members of the audience were keen to know whether buildings designed to biophilic principles would cost more, and what the return on investment (ROI) of a biophilic building would be.

Leong said it is necessary to look at ROI from a perspective other than dollars and cents. A well designed, sustainable property could also be a more social place to live and work in.

“Commercial buildings are struggling to attract visitors now, unless there are special events. If a greener design can create more social participation, there needs to be evaluation [of ROI] from that perspective.”

Jain added: “Biomimicry-based designs are going to be cheaper in the long run, because they are more efficient by design.”

He pointed out that biomimicry and biophilia, the innate desire for people to connect with nature, are often confused. Just because a building copies the functionality of nature, does not necessarily mean it should be festooned with vegetation and greenery.

“Cost increases when we try to make things unusually green with non-native plants that cost a lot to maintain, for instance. But biomimicry is about functions and efficiency. Once we make things more efficient, costs will come down.”