Do financial markets care about sustainability?

Financial markets have shown they do not reward companies that embrace sustainability, said Sindicatum’s Assaad Razzouk at an event in Singapore recently. Asia's sustainability crowd was not amused.

Until such time as fossil fuel companies cannot be listed on stock exchanges and consumers only make low-carbon choices, the financial market will not reward companies for being sustainable, Sindicatum Sustainable Resources’ CEO, Assaad Razzouk has said.

Razzouk threw this grenade at an audience of sustainability professionals last month, suggesting that as the market does not reward companies for improving their environmental and social performance, the UN’s Sustainable Development Goals (SDGs) cannot be met.

He and fellow panellists - JD Kasamoto from document management provider Ricoh and Agung Laksamana, director of corporate affairs from pulp and paper giant APRIL - were speaking on a panel themed “Will businesses drive the SDGs?”, but the conversation was dominated by whether the capital market generates returns for sustainable companies.

The SDGs are a series of 17 goals that lay out a pathway to a world with diminished inequality, stronger environmental protection and a more sustainable economy.

Razzouk got the ball rolling by saying that capital markets, collectively worth $250 trillion in investments, are not taking sustainability seriously at all.

“As long as that amount of capital doesn’t actually care about climate, clean energy, sustainability and science-based emissions targets, then the world as we know it is not going to change at the speed that we need it to change to survive as a species.”

He cited examples of three multinational companies that have made genuine efforts to become more responsible in their operations: NRG Energy from the United States, Engie from France, and Anglo-Dutch firm Unilever.

NRG’s attempt to stock its portfolio with renewable energy sources ended with the ousting of CEO David Crane after the company’s stock tumbled.

Engie’s share price plunged 29 per cent in 2016 as it sold off its fossil fuel assets, suggesting that investors were not convinced by the company’s transformation plan.

Unilever’s stock “underperforms its peers materially” while the company recently fended off a takeover bid from Kraft Heinz, a firm that cares little for sustainability but has higher stock value, noted Razzouk.

He added that companies looking to take a more sustainable path will not be cut any slack during the transition, and are instead criticised for not delivering results.

“It’s very clear that businesses are fast asleep at the wheel [with regards to sustainability] and that 99 per cent or more think SDGs stand for a sexually transmitted disease,” he said.

When asked who felt that businesses are asleep at the wheel regarding sustainability, about half the 100-strong audience raised their hands.

The panel discussion was held as part of an Eco-Business event, where the results of the Global Sustainability Pulse Survey were unveiled to the audience of mostly sustainability professionals.

A number of delegates were keen to voice their opposition to Razzouk’s comments.

Members of the audience pointed out that studies have shown a positive correlation between sustainability and performance, and that interest in green finance and impact investing is on the rise.

Organisations such as the UN’s Principles for Responsible Investment, which supports commitments made by investors in areas such as human rights, labour, environment and anti-corruption, also represent a sizeable portion of the financial market that is interested in sustainability, one member of the audience noted.

Razzouk replied that companies sometimes hide behind their pledges without actually changing their behaviour. “You have to look inside the kimono,” he said.

Members of the audience, including Winnie Tan, head of sustainability, Central Europe, ASEAN and South Asia, Standard Chartered Bank, said some investors are choosing to be more responsible in their choice of funds, with companies having to meet certain environmental, social or social standards. But Razzouk remained unconvinced.

“I’ll definitely believe you when coal, oil or gas companies can’t go public anymore. Or when we’re no longer developing oil from tar sands with help from the banking sector, and when we see renewable energy companies and similar companies actually going public en masse,” he replied. 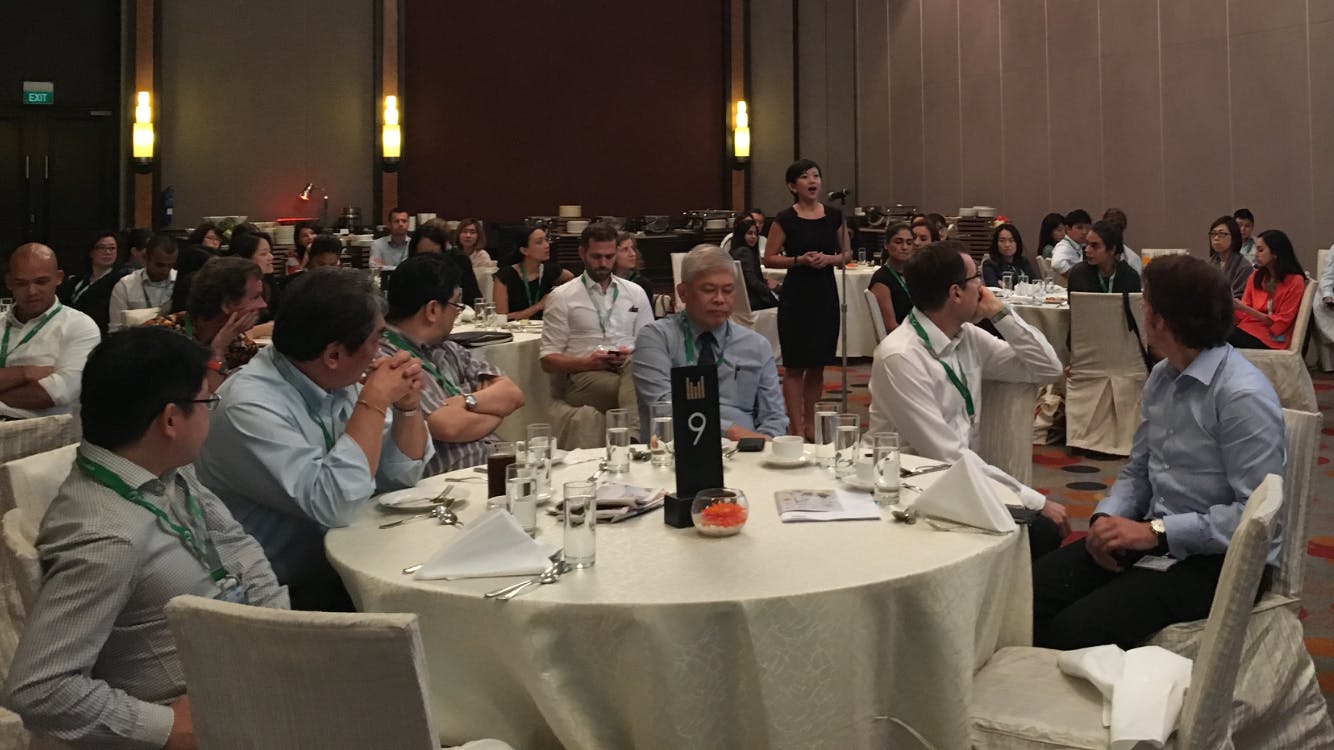 Winnie Tan, regional head of sustainability at Standard Chartered Bank, responds to the comment that sustainability is not rewarded by the financial markets. Image: Eco-Business

However, the audience was quick to counter Razzouk’s line of argument. Caroline Seow, director of sustainability for The Family Business Network International, said there will always be examples of companies that have not benefitted from pursuing sustainability, but there are “myriad” companies that have, including Fromageries Bel, which owns The Laughing Cow brand of cheeses.

“We all know that capital markets need reform, but there are many movements out there for sustainability in business, like the [sustainability certification body for businesses] B Corp movement that is pro-business and pro-environment. So let’s just get on with it,” she said.

Sriven Naidu, director of programme development and partnerships (Masters of Tri-Sector Collaboration) at Singapore Management University, questioned the sense in using stock market price as a measure of corporate success in sustainability, suggesting that the longevity of a firm might be a better gauge.

But Razzouk remained adamant: “We can’t completely change the capitalist system just between us here in this room, so I think for now it will have to be stock price and profitability.”

“I run a renewable energy business for example, which is sustainable through and through. All I’m saying is, you don’t get any brownie points for that.”

“It’s easy to forget that we all live in our own little bubbles, and mine is dominated by companies genuinely trying to make a difference and to integrate sustainability into their operations,” he said, adding that it was easy to overlook the broader status quo, in which capital markets do not reward sustainable companies for their efforts.

“Bursting our bubble from time to time is important, so that we don’t get complacent or lose sight of the wider reality that needs to change,” Milburn said.

Ultimately making the financial markets reward sustainability comes down to the actions of governments and consumers, said Razzouk.

Governments have to price carbon, water and waste appropriately and enforce sustainable legislation, while consumers could take a more “militant” view towards how businesses are impacting the earth and boycott irresponsible brands.

“Only through a combination of government and consumer action will we see capital markets start giving credit to any company that is making even modest efforts to bring sustainability into its supply chain, DNA or product,” he said.

At the event, Ricoh’s Kasamoto announced that the company is launching a Circular Economy Challenge as part of its annual nation-wide sustainability event, Eco Action Day, which encourages individuals and companies to take action to protect the environment.

The Circular Economy Challenge invites Singapore-based youths to come up with ideas for how to make the economy more sustainable. The top prize is a trip to Japan.

Registration for the Circular Economy Challenge is now open.