An aggressive lobbying campaign spearheaded by actors from Indonesia and Malaysia, the world’s top palm oil producers, have framed the ban as an attack on small farmers, although the industry is dominated by large companies.

The uproar over Iceland Foods’ decision to ban palm oil from its own-label products has been loud and swift. While many applaud the move as a bold stance against deforestation and land grabbing by plantation companies, others — including some scientists and conservation groups — fear the British supermarket chain may be making things worse.

“In order to feed the world, palm oil is actually part of the solution, because fewer resources are required,” write researchers from the University of Kent, who point out that palm oil has much higher yield per acre than alternative vegetable oils. “Iceland’s move to ban palm oil products, rather than work with the industry to seek sustainably-sourced solutions, could be viewed as a step backwards … Avoiding it altogether runs the risk of putting pressure on other crops that are equally to blame for the world’s environmental problems.”

The Sumatran Orangutan Society, an NGO, notes that palm oil bans may even cause prices to plummet, making it more affordable to the growing biofuel market. This may actually increase demand and hasten expansion.

Further, a 2016 WWF report looked at the potential impact of replacing palm oil throughout Germany with other indiscriminately sourced vegetable oils. They found that this would only serve to shift and possibly exacerbate the problems with land use, carbon emissions and biodiversity loss.

Rather than avoid palm, these groups believe that retailers and consumers would have greater impact if they supported producers who are doing things sustainably. But, while Iceland agrees with the sentiment, it is not convinced this is a practical option.

“We are not opposed to palm oil per se: we are opposed to deforestation,” Keith Hann, Iceland’s director of corporate affairs, told Mongabay. “We do not believe that truly sustainable palm oil is currently available on the mass market and we therefore took the decision to remove it as an ingredient [in order to] raise awareness of the deforestation issue and – we hope – energize the palm oil industry to clean up its act.”

Hann points out that in reality, Iceland has little power to make a true difference through its purchasing. Even if it could overcome the considerable challenge of shifting all of its 300+ suppliers to using certified palm oil — if it were available — the impact would be minor.

“We believe that the major global food brand manufacturers are best placed to lead the drive towards genuinely sustainable palm oil,” Hann said. “And, we will warmly welcome any moves by them to increase their use of palm oil that meets this standard.”

“Iceland buys 500 or 1000 tons of palm oil a year. Unilever between 1 and 1.5 million tons a year. If Unilever buys sustainable palm oil it’s a game changer. If Iceland does it changes very little,” Sauven said. He sees Iceland’s announcement as a “warning shot from a tiny UK company, that could start to grow bigger if palm oil producers and governments don’t tackle the scourge of deforestation.”

However, Sauven does not necessarily advocate that other retailers follow Iceland’s lead. He believes that the major global companies need to hold palm oil suppliers to their sustainability commitments.

And while each of these large corporations has joined the Roundtable on Sustainable Palm Oil, the world’s largest association for ethical production of the commodity, the RSPO’s credibility has repeatedly been called into question. Most recently, a report alleges that an RSPO company cleared some 4,000 hectares of rainforest in Papua, Indonesia last year. That company supplies palm oil to Mars, Nestle, PepsiCo and Unilever. 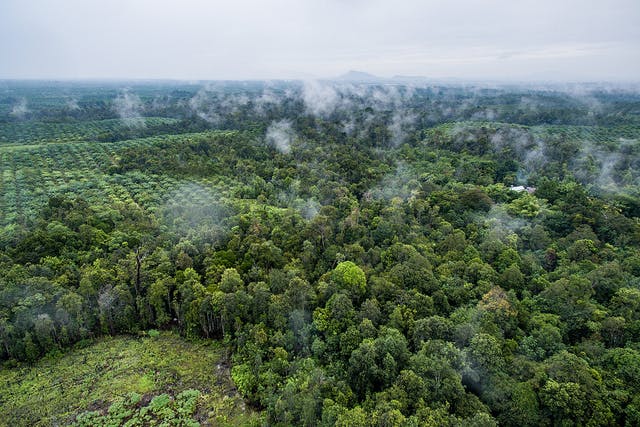 An aggressive lobbying campaign spearheaded by actors from Indonesia and Malaysia, the world’s top palm oil producers, have framed the ban as an attack on small farmers, although the industry is dominated by large companies. Deforestation, on the other hand, continues to increase as seen in this aerial view of palm oil and the forest in Sentabai Village, West Kalimantan. Image by: CIFOR, CC BY-NC-ND 2.0

To combat the RSPO’s shortcomings, several NGOs (including Greenpeace, WWF and the Orangutan Land Trust) formed the Palm Oil Innovation Group. The POIG’s charter includes stricter standards for sustainability than does the RSPO, and actually verifies that producers are adhering to their commitments.

POIG released a statement informing Iceland that deforestation-free palm oil is indeed available — right now — to the European market. And, while there are only two producers currently maintaining POIG verification (Agropalma in Brazil, and Daabon in Columbia) they feel confident they can handle Iceland’s needs.

However, because consumers and retailers are unwilling to pay the additional costs for responsibly produced oil, much of this gets dumped into the conventional market, leaving Agropalma to eat the costs. The sustainable oil premium is typically only 3-7 percent, while Organic and Fair Trade commands a 50 percent markup.

“We need to pay a fee [to certify the product], and we only do this when we have the demand,” Túlio Dias said. He was disappointed by Iceland’s decision, because not only does it ignore Agropalma’s efforts, it shifts the environmental costs elsewhere.

“The real impact of such a decision is unknown,” Túlio Dias added, “since there is no reliable and transparent traceability system in place for alternatives to palm oil.”

When asked whether Iceland considered the environmental costs of using alternative oils, and whether it would commit to only using sustainable oil of any type, Hann stated, “We are using a mix of replacement oils and fats, and have done our utmost to ensure that these are sourced responsibly.”

As for including POIG-certified palm oil in Iceland’s supply chain, Hann said, “We are aware of, and applaud, the efforts of POIG … We believe that we and POIG are essentially on the same side in driving towards deforestation-free palm oil, and we will be very happy to reflect this in our campaign messaging.”

We listen to our customers and bring them the food they want to buy. Our range will evolve in response to their wishes, and will no doubt reflect their growing interest in both health and the environment.

However, Hann continued, Iceland also believes that POIG oil is currently still a “niche product and, as such, is not available to the mass market in which we operate.” He recognizes that Iceland is usually among the smaller retail customers of its many suppliers, and as such, it would be difficult for Iceland to demand this kind of change.

Túlio Dias feels confident Agropalma could help Iceland overcome whatever logistical challenges it faces. Further, he personally believes the 5 million pounds ($6.8 million) Iceland is spending to shift away from palm oil could be better used elsewhere.

“If a company has 5 million pounds to invest,” Tulia Dias said, “the best value would be achieved by engaging with the worst supplier that demonstrated a solid and real will to change and improve … Using such amount of money to change the raw material is definitely not the best way to improve sustainability of supply chains.”

While John Sauven also agrees that cleaning up the supply chain is necessary and important, ultimately the problem stems from consumption.

“If we all eat vast quantities of meat, from industrial meat lots, fed on soya,” Sauven said, “no ecosystem in Latin America will survive. We need to talk about consumption. About demand not just supply.”

The WWF report reached the same conclusion. Particularly, it found that vast quantities of oil are used in the production of sweet and fatty goods as well as fried products and ready-made foods — all of which make up a large portion of Iceland’s product line.

“We listen to our customers and bring them the food they want to buy,” Hann said when asked if Iceland had considered reducing their offerings of these oil-intensive products. “Our range will evolve in response to their wishes, and will no doubt reflect their growing interest in both health and the environment.”