Two-thirds of proposed liquified gas terminals and power plants are unlikely to be built, due to cost, policy and infrastructure woes, according to the Institute for Energy Economics and Financial Analysis.

If the future plays out as predicted, Vietnam could soon be facing a power shortfall that is as big as its total electricity supply today, from its proposed gas projects. In Myanmar, where there has been a surprise military coup, major gas projects are now seen as entirely unfeasible too.

In fact, a recent report published by the United States-based non-profit Institute for Energy Economics and Financial Analysis (IEEFA) estimated that, even without a coup and the political instability that follows, only 14 per cent of Myanmar’s proposed liquefied natural gas (LNG) investments may be viable.

The energy think tank, which looked into announced plans for LNG terminals and natural gas power plants in seven emerging Asian economies, concluded that two-thirds of currently proposed projects are unlikely to be built, due to poor regulation, financing constraints, weak infrastructure and other issues. Wild swings in LNG prices, from the COVID-19 lows last year to the current recovery spike that’s 17 times higher, do not do any good either, especially when these developing countries need to keep a tight hold on their purse strings, said the report.

Natural gas is seen as a “bridge” fuel for Asia, as the region transitions away from highly-pollutive coal power and finds ways to adopt more renewables. As its domestic supply dwindles, countries in Asia increasingly look to import gas from elsewhere in the form of dense, transport-friendly LNG. In a separate report by US non-profit Global Energy Monitor, plans to build gas plants in Asia have been found to exceed coal plant closures.

“By increasing reliance on imported LNG, countries in emerging Asia would be gambling with their economies and binding their economic futures to an unpredictable, US dollar-denominated commodity,” the authors of the IEEFA report, Grant Hauber and Sam Reynolds, told Eco-business.

They point to Bangladesh, which stopped buying LNG from the spot market in August due to cost concerns, resumed in September amid energy shortages, and paid sky high prices for shipments in October.

“That is an energy insecurity crisis in the making,” the authors said.

In their research, the authors identified proposed gas projects and screened them on three criteria: whether plans make sense based on timing, size, location and infrastructure; whether the home country’s know-how, economic performance and governance affects the development of the projects; and if there are financial issues like lending limits and low investor appetite.

Investment costs were estimated based on announcements, think-tank reports and a financial risk model. Besides Vietnam and Myanmar, the other five countries studied are Thailand, Philippines, Pakistan, Bangladesh and Cambodia. Most of them are LNG net-importers from Emerging Asia, as defined by the International Energy Agency. 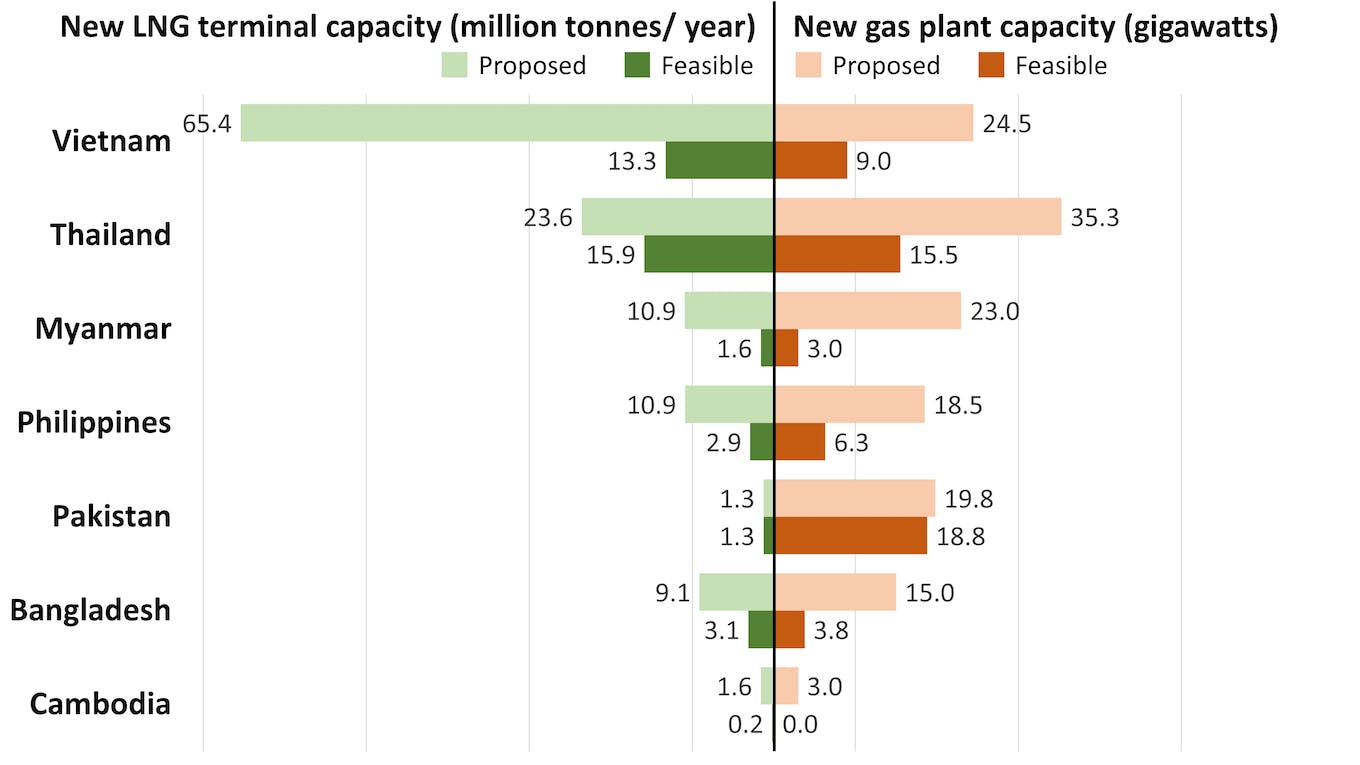 The report found that about 70 per cent of 122.8 gigawatts of power plant capacity, and 60 per cent of 139.1 million tonnes per year of LNG import capacity, may never be built. They represent over US$88 billion of proposed investments.

Vietnam is expected to be the most impacted from unfulfilled gas plant projects, with over 50 gigawatts of electricity generation potentially lost.

A key issue identified is new laws that passed the buck on managing price volatility to private developers, resulting in long negotiations, if not project fall throughs.

Proposed plants may also be under-utilised, as they risk being edged out by both upcoming renewable energy projects and coal plants. Vietnam recently announced plans to have three-quarters of its power generated from renewables by 2045, while keeping many of its coal projects on track. This means electricity buyers may shy away from long-term contracts with gas plants that benefit the builders.

Meanwhile, Vietnam’s proposed LNG projects are in peril from recent domestic gas finds that could last the country over 70 years. The report estimates that over 15 million tonnes per year of LNG import capacity may not come to fruition.

The biggest losers on the LNG front are said to be Thailand and Myanmar, each potentially having to forgo some 20 million tonnes of proposed import capacity.

For Myanmar, the military coup is expected to eclipse all other concerns, and may even drive LNG development down to nil.

As for Thailand, high LNG costs may steer end-users away. Its high state ownership of gas infrastructure means that private developers may have a hard time developing their own LNG import infrastructure.

Governance issues also plague countries like Cambodia — which is said to lack laws for sectors like gas transport and downstream use, the Philippines — whose regulations may not promise long-term cost recovery, and Bangladesh, which the authors describe as facing “regulatory whiplash”.

“There appears to be a crisis of planning and sector management ongoing throughout the region,” said the authors, adding that quick deals offered by major foreign project backers Japan, South Korea and China did not help.

A bright spot for gas projects was found in Pakistan, where most of its proposed 1.3 gigawatts of gas power and close to 20 million tonnes per year of LNG import capacities were deemed viable. Four import terminals and a gas plant received go-aheads from the government to be built this year.

The authors acknowledged the role of gas plants in balancing the variable output of wind and solar farms, but said that most plants in the Emerging Asia region aren’t effective back-ups as they are huge units that take too long to manage peaks and troughs.

Gloystein agreed that good planning is key in the Emerging Asia region for energy security, given that LNG costs are not expected to go down in the near future. Analysts have been warning of further price spikes of up to around $100/MMBtu, about three times where prices are now.

A lot of governments are prone to lobbyism or pre-existing thinking. Like, ‘we will always use this from the same partner, we will always do that’.

“A lot of governments are prone to lobbyism or pre-existing thinking. Like, ‘we will always use this from the same partner, we will always do that’,” said Gloystein of countries’ LNG plans. “A lot of countries get it wrong, not just in emerging markets.”

He added that Emerging Asia countries tend to set artificially low electricity prices, which hides the true costs of investments. The IEEFA report flagged high government spending on gas projects as a risk in Vietnam, Bangladesh, Pakistan and Myanmar, where power is subsidised.