Australians have mostly ignored scientists' dire climate warnings, while the media has blamed catastrophic floods and bushfires on poor infrastructure. But the pandemic has jolted the country towards more sustainable lifestyle habits, research from the University of Queensland finds.

The threat of climate change has had very little impact on persuading Australians to lead more environmentally conscious lives, but the Covid-19 pandemic has prompted the broad adoption of greener consumer habits, according to a study by the University of Queensland (UQ).

“The Intergovernmental Panel on Climate Change (IPCC) report in 2018 called for rapid, far-reaching and unprecedented changes in all aspects of society to avert the worst disasters of climate change. But these kinds of reports do not spur citizen action, at least not as much as Covid-19 apparently has – and especially not in Australia,” said Dr Franzisca Weder, a senior lecturer in sustainability communication at UQ.

In the early stages of the pandemic, people were far more likely to grow their own food, reduce food waste, ride a bicycle, and adopt a plant-based diet, and less likely to drive their own cars, the study found.

“During lockdowns at the start of the Covid-19 pandemic we found people became more conscious about their home, neighbours and community,” Weder said. “It also led to many people questioning if they could be self-sufficient in a crisis, which was driven by food shortages in supermarkets.”

The rapid and widespread uptake of mask-wearing and working from home have also made people realise that it is possible to bring about society-wide changes in behaviour quickly, Weder told Eco-Business.

The study, conducted among people in Brisbane in 2021 and published on Thursday, did not measure the link between worsening extreme weather and consumer behaviour, but Weder said climate impacts probably have had little effect on how people leads their lives in Australia.

The country’s disastrous floods that inundated Eastern Australia between February and April this year and devastating bush fires that raged in the summer of 2020–2021 have largely been framed by the media as the result of poor infrastructure or forest management rather than linked to climate change, which may also dampened the impetus for greener behaviour, she said.

An analysis of the press coverage in Australia of the floods in March this year found that newspapers owned by Rupert Murdoch’s News Corporation such as Daily Telegraph, Courier Mail and The Australian, which enjoys a large share of the country’s readership, did not link the flooding to climate change or argued that the floods were not exacerbated by climate-related events.

By contrast, in Europe, extreme weather is consistently framed as climate change-related by the press, reflecting humanity’s imbalance with nature and linked to IPCC or other scientific data. The climate connection made by the media is likely to have persuaded people to adopt more sustainability habits more quickly, Weder argued. 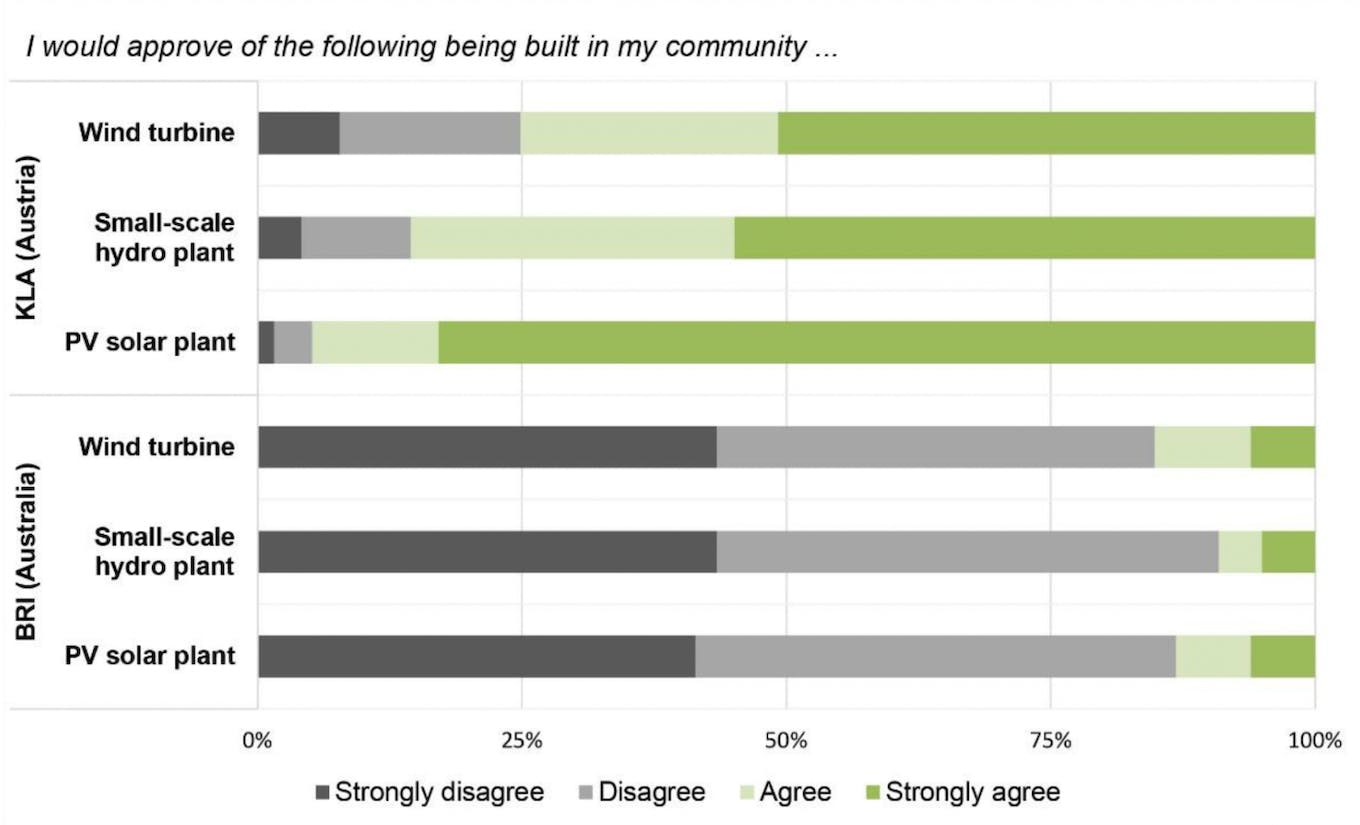 The willingness among Australians and Austrians to have renewable energy infrastructure built in their communities [click to enlarge]. Source: University of Queensland

UQ’s study also surveyed people in Austria, where 80 per cent of people said they were worried or extremely worried about climate change, compared to only 54 per cent of Australian respondents.

Austrians were also much more likely to feel that they had a personal responsibility to tackle climate change than Australians, and so lead more sustainable lifestyles.

The study also showed big differences between tolerance among Europeans and Australians for renewable energy infrastructure where they live. More than two-thirds of Austrians would welcome solar, wind or hydropower facilities in their backyards, but a similar proportion of Australians would strongly oppose it.

Australians are among the world’s heaviest consumers of resources, according to Earth Overshoot Day, which measures the consumption load of countries. If everyone consumed like Australians, humanity would require four-and-a-half planets to sustain itself. Austrian levels of consumption would require 3.8 planets.