Countries have very different ideas on how to deal with plastic

Two drafts call for binding treaties, while a third wants voluntary measures. They also differ on which stages of the plastic life-cycle are targeted. Many countries have not announced who they back, setting the stage for tough negotiations.

In a fortnight, world leaders will be poring over a set of proposals on how to tackle plastic pollution at a global scale. It is a multi-million tonnes problem that has been decimating natural ecosystems and hurting human health for decades.

The United Nations said the discussions could be the most important development on the global environmental agenda since the Paris Agreement in 2015, where countries agreed to work towards limiting global warming to well below 2 degrees Celsius.

Three proposals have been submitted for consideration – one jointly by Peru and Rwanda, one by Japan, and another by India. Negotiators are currently trying to merge the first two drafts so only two documents are likely to be on the table by the time high-level talks begin at the United Nations Environment Assembly (UNEA) meeting in Nairobi, Kenya.

The issue on how to regulate plastic and waste, especially that which finds its way into the world’s oceans, has been discussed at the UN for years. Several declarations have been made, but a legally binding treaty remains elusive. Some proposals are calling for more decisive action that will drive change. Several multinational firms have voiced their support, though some remain resistant to tough measures.

“There is a lot of discussion about how it’s important to understand the urgency and to act now, and not delay action,” said United Nations Environment Programme’s director of ecosystem services Susan Gardner at a press briefing last week.

“Of course it depends on what the negotiators decide,” she added.

What do the papers call for?

The Peru-Rwanda draft is the most detailed offering. The duo is asking for a comprehensive plan covering plastics production, use of raw materials, consumption, product design, waste management and microplastics, a form of degraded particles that can be mistakenly eaten by marine animals.

It wants an intergovernmental negotiating committee (INC) to also push for a circular economy, where plastic waste is reused as raw material for new products, to help keep trash out of landfills and oceans.

INCs are groups of experts tasked to formulate international agreements. Past groups have come up with agreements on mercury pollution, desertification and climate action.

“By providing a lot of detail in the mandate in this UNEA resolution, they give clear instructions to the negotiators, to the INC, for their work,” Gardner said.

The Peru-Rwanda proposal also allows the INC to consider any other matters that may be relevant.

Japan’s draft comes second in details. It’s cover note states that the proposal provides “a general structure that countries could concur with, without prioritising a specific stage in the value chain of plastics over other stages”. The document states the need for a ‘comprehensive life-cycle approach’, resource efficiency and a circular economy, but elaborates little on what they entail.

Gardner said proponents of this draft have clarified that they hope to keep more parties engaged in negotiations this way.

“The trade-off is that by having less detail, you’re leaving it somewhat ambiguous at the moment. So you’re not exactly sure how much ambition will be coming out of the final product, and there is a cost in terms of the time required of the INC to decide on these details later,” she added.

A joint report by the US-based non-profit Centre for International Environmental Law and UK-based advocacy group Environmental Investigations Agency noted that the Japan draft focuses more on waste management and monitoring than the Peru-Rwanda draft. Japan also targets marine plastics rather than pollution in all environments.

Japan’s draft also stands out for specifying a long-term goal, to reduce additional marine plastic pollution to zero by 2050.

“It’s good to have that deadline in the future, an achievable deadline that everybody can strive towards,” said Associate Professor Linda Sulistiawati, a senior research fellow at the National University of Singapore’s Asia-Pacific Centre for Environmental Law.

Such targets had been set by past pacts such as the Montreal Protocol, which introduced stepped limits to reduce the use of chlorofluorocarbons in refrigerants in the 1990s. The substance was found to deplete the Earth’s upper-atmosphere ozone layer, which prevents harmful solar radiation from reaching the surface.

India’s draft has a greater focus on single-use plastics, citing the concern that they contribute to improperly treated litter that ends up in oceans. 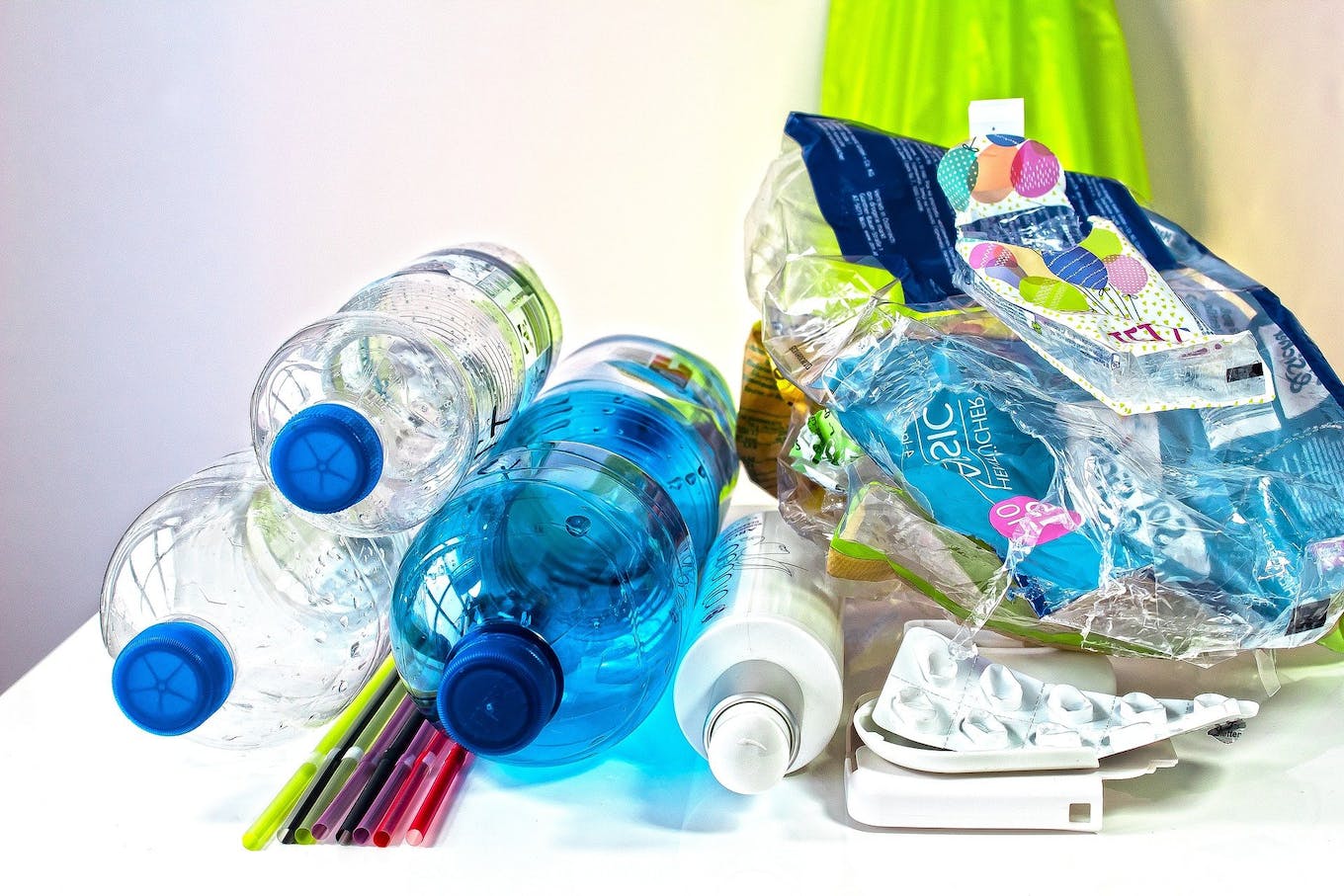 Items made out of various single-use plastics. Recycling lacks the capabilities to deal with mixed materials, even for plastics. Image: Stux , CC BY-SA 3.0

The draft wants countries to develop national plans on the principles of the popular waste management mantra ‘reduce, reuse and recycle’. It also calls for Extended Producer Responsibility schemes, where manufacturers are placed in charge of recycling or disposing their products and packaging.

On the international front, India wants the UN to host annual meetings on the policy, technology, finance and monitoring aspects of plastics management.

All three drafts contain elements of financial help to poorer countries, and the involvement of the private sector.

“I think it is the right way to go,” Sulistiawati said. “Multinational companies are producing massive products of plastic. So far, their responsibilities haven’t been spelled out in any of the international agreements that we have.”

“We caution against heavy-handed restrictions that impede the ability of materials to flow around the world, especially in a time of stressed supply chains,” it said. “Production or consumption limits on plastics is the wrong approach and would encourage the use of products that are inferior from a performance or sustainability profile.”

Multinational companies are producing massive products of plastic. So far, their responsibilities haven’t been spelled out in any of the international agreements that we have.

Both drafts call for the eventual agreement to be cast in law, similar to major climate treaties like the Paris Agreement and Kyoto Protocol.

This means countries that do not follow the standards of the eventual treaty, if agreed upon, could face penalties like fines and embargoes.

A punitive approach hasn’t always worked. Canada left the Kyoto Protocol in 2011, in the face of potential fines for failing to meet emissions reduction targets. In the Paris Agreement, although countries are obliged to regularly update national climate plans, there are no prescribed penalties if they renege the duty.

“I think some countries are scared of the phrase ‘legally-binding’ as it would put them in the responsibility chair, the liability chair,” said Sulistiawati.

What’s the timeline for action?

Both the Peru-Rwanda and the Japan drafts want the INC to complete their work within one UNEA cycle, which is usually two years. This means countries could start signing and ratifying the agreement in 2024, although that process itself could take years.

Past INCs have taken longer to draft treaties. The committee for mercury pollution, which was formed in 2009, took four years to hammer out a document. The resultant Minamata Convention entered into force after fifty countries ratified it in 2017. Others, like the one preceding the landmark UN Framework Convention on Climate Change, took just 15 months in 1990 and 1991.

Gardner said that the India draft is proposing for countries to collect more information on plastic waste, before deciding if the INC process should be kicked off at the next UNEA meeting.

“In the views of proponents, that would allow the conversation to proceed and information to advance, so that when an INC is called, if it is, it would have strong information to do its work. Opponents of this approach feel that this would be delaying progress by two years, and they feel much of this work has already been done,” she added.

Peru and Rwanda. Their draft is co-sponsored by 54 countries, including the European Union, along with several South American and African countries.

A group of non-government organisations, including Break Free From Plastic and Plastic Pollution Coalition, are also backing their draft for its level of detail and legally binding nature.

Japan’s draft is co-sponsored by four countries – reportedly Antigua and Barbuda, Cambodia, Palau and Sri Lanka. India’s plan currently has no backers. The United Nations Environment Programme said India is working with some countries on their draft without disclosing details.

“In many cases the national positions are very nuanced, or have been articulated in these meetings in terms of questions to the proponents of different resolutions,” said Gardner.

Last September, government officials gave their take on tackling plastic pollution at a ministerial conference. Several developing countries asked for more support. Singapore said plastic pollution was a waste management issue, not a production issue. The United States said it had not developed an internal position on a global plastics treaty, but later confirmed it will join talks to create one. Petrochemicals is a powerful and lucrative industry for both countries.

A WWF report last October found that Asian governments saw value in an international agreement, such as incentives for the development of plastic alternatives, stronger control on illegal dumping and access to finances. However, they were also concerned about their capacity to uphold a treaty.