Indonesia envisions its future capital of Nusantara to be a sustainable city, but only if the masterplan treads lightly on local biodiversity and culture.

Nusantara could be a remarkable, green capital city, if Indonesian stakeholders work together to address environmental sensitivities.

A shared vision is vital, according to speakers at the recent “Nusantara – Asia’s New Green Capital?” virtual panel event, organised by Eco-Business.

“You need to start with the same vision. Everyone, including the stakeholders, should be able to drive that vision to achieve the goals,” said Dr. Ichsan, a circular economy and renewable energy professional.

The business advisor to A-Wing Group and PT Bina Karya has been involved in more than 350 village development projects in Indonesia since 2010.

Once the concept of the city is ready, Ichsan added, then the development timeline could be planned to entice suitable investors.

And Nusantara promises to be an extraordinary development.

Indonesia, the largest economy in ASEAN, is shifting its capital from the flood-prone Jakarta on Java Island to the densely forested East Kalimantan province on Borneo. 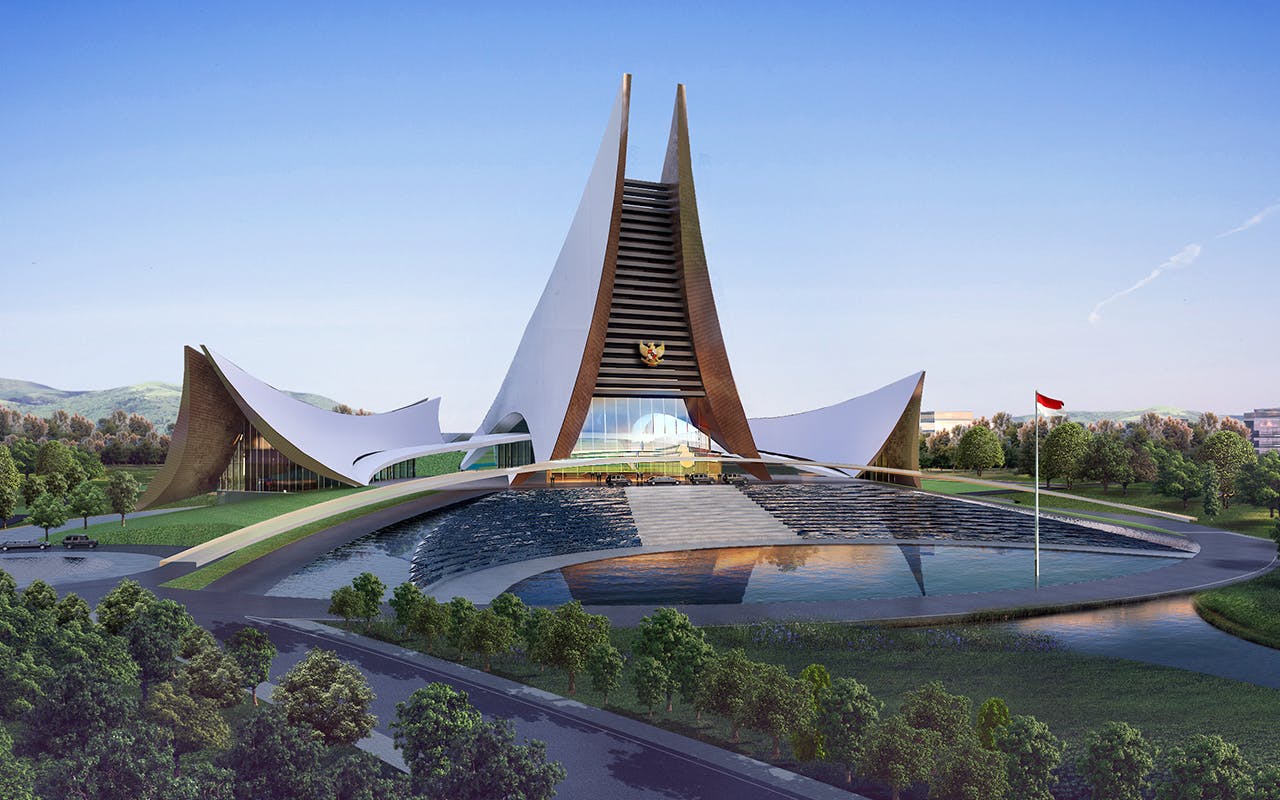 A design illustration of the new capital city in Indonesia. Image: Urban +

Sitting deep within the jungle, Nusantara will be developed in stages until its completion in 2045, which will coincide with Indonesia’s 100th year of independence. Some observers believe that its potential as a green metropolis is enormous.

Nusantara will span more than 250,000 hectares – about three times the size of Jakarta – and Kalimantan is largely free from natural disasters such as earthquakes, which offers a platform for stable growth.

But the cultural differences between Java and Kalimantan need to be considered, according to Ichsan. The Indonesian government must facilitate a harmonious relationship between residents and officials moving from Jakarta and the Indigenous people of the new capital.

“How can we bring the community that does not belong to that area to work together with the local community? Culture shock will happen for sure,” said Ichsan.

Y.W. Junardy echoes the value of collaboration. The president and board member of Indonesia Global Compact Network and president commissioner of Jakarta-based investment holding company PT Rajawali Corporation called upon all parties to invoke the spirit of “Gotong Royong” (Bahasa Indonesia for community mutual assistance), with vested interests working together on the ambitious Nusantara masterplan.

“Moving to Nusantara is a strategic and visionary decision. It should be done with the participation of everybody,” said Junardy.

The Indonesian Government has promised to reserve 75 per cent of Nusantara for green spaces to ensure the new capital city can support the pharmaceutical, health and technology sectors whilst remaining a low-carbon ‘super hub’.

However, environmentalists are concerned that the development may increase pollution in East Kalimantan and reduce rainforests that are home to orangutans and sun bears.

Hendricus Andy Simarmata, president of the Indonesian Association of Urban and Regional Planners (IAP), said the government had enacted a series of social and environment safeguards to guarantee the sustainable development of Nusantara.  It also plans to create wildlife habitats and green corridors, said Simarmata.

“Nusantara is using the concept of a forest city…There are preparations to ensure that sustainable development takes place,” he said, giving the assurance that the government has created “socio-environmental safeguards”.

Local materials should be used to build Nusantara, according to Simamarta, to reduce carbon emissions associated with transportation. He also hopes that aspects of Kalimantan culture will be incorporated into the design of the city.

Junardy believes the local communities will benefit economically from the new capital. He expects businesses and students to move to Kalimantan to take advantage of the huge opportunities offered by the US$32 billion mega project.

Nusantara’s rise, he added, would boost trade in the surrounding townships of Balikpapan and Samarinda, and eventually bridge the gap between the eastern and western parts of Indonesia.

“These two places (Balikpapan and Samarinda) will become new developing cities. We have an economic and development gap between the western part of Indonesia – Sumatera and Java – and the eastern part of Indonesia which includes Nusa Tenggara, Papua and so forth. There is also an infrastructure gap and a communication gap,” said Junardy.

“The local business in Kalimantan will be moving up. The businesses in Jakarta are looking everywhere at opportunities over there.”

As a new capital city, Nusantara will also have the advantage of learning from its predecessor. Jessica Hanafi, the founder and executive director of PT Life Cycle Indonesia, said that Jakarta’s previous development was mostly ad-hoc and unplanned.

A city founded more than 400 years ago could not not be expected to envision the integration of essential infrastructure and sustainable development, she said.

“In central Jakarta, essential infrastructure such as wastewater treatment and waste facilities, as well as underground systems, was not in the initial masterplan for Jakarta. I think it was never envisioned at that time,” said Hanafi.

According to Hanafi, as a result, Jakarta is now beset with a litany of problems, including overcrowding and flooding.

The city of 10 million people is paying a heavy price for the over-extraction of groundwater, becoming one of the fastest sinking cities in the world. Parts of north Jakarta are falling at an estimated 25 centimetres a year, due to subsidence.

History should not repeat itself in Nusantara. “We cannot move and create the same problems we had in Jakarta in the new capital city,” said Dr. Ichsan. “Sustainable development goals need to be implemented in the design of Nusantara from the beginning, not being added on later like toppings on a pizza.”

But the panellists emphasised that Nusantara’s rise would not precipitate Jakarta’s fall.

Nusantara, on the other hand, could offer a template for other smart, green cities to follow, by incorporating a clear, sustainable masterplan that protects the indigenous communities and their biodiversity.