A study of biodiversity finds that more than two thirds of the natural world was lost between 1970 and 2018. Coming negotiations at COP15 could be the 'last chance' to protect the ecosystems on which humanity depends.

A comprehensive study of global biodiversity paints a worrying picture of the natural world, with freshwater and tropical ecosystems the biggest casualities of human exploitation over the past half century.

The Living Planet 2022 study, published by World Wide Fund for Nature (WWF) and Zoological Society of London (ZSL) on Thursday, finds wildlife populations have dropped by an average of 69 per cent between 1970 and 2018, with particularly steep declines in the tropical regions of Asia Pacific, Africa and Latin America.

The 2022 version of the report includes 838 new species and 11,011 new populations. Written by 89 contributors, it covers almost 32,000 populations of 5,230 species of mammals, birds, fish, reptiles and amphibians.

Asia Pacific has lost more than half (55 per cent) of its natural capital in the past 48 years. Habitat degradation and loss was the most commonly recorded threat to the region’s wildlife.

Biodiversity declines have been even steeper in Africa (66 per cent) and steepest in Latin America – home to the world’s largest and most biodiverse forest, the Amazon – which has seen biodiversity wither by 94 per cent.

“It is within tropical regions where monitored wildlife populations are plummeting at a staggering rate,” Alistair Monument, WWF’s director of conservation impact, Asia Pacific, told Eco-Business.

Nature loss is now rarely perceived as a purely moral or ecological issue, with a broadened sense of its vital importance to our economy, social stability, individual well-being and health, and as a matter of justice. 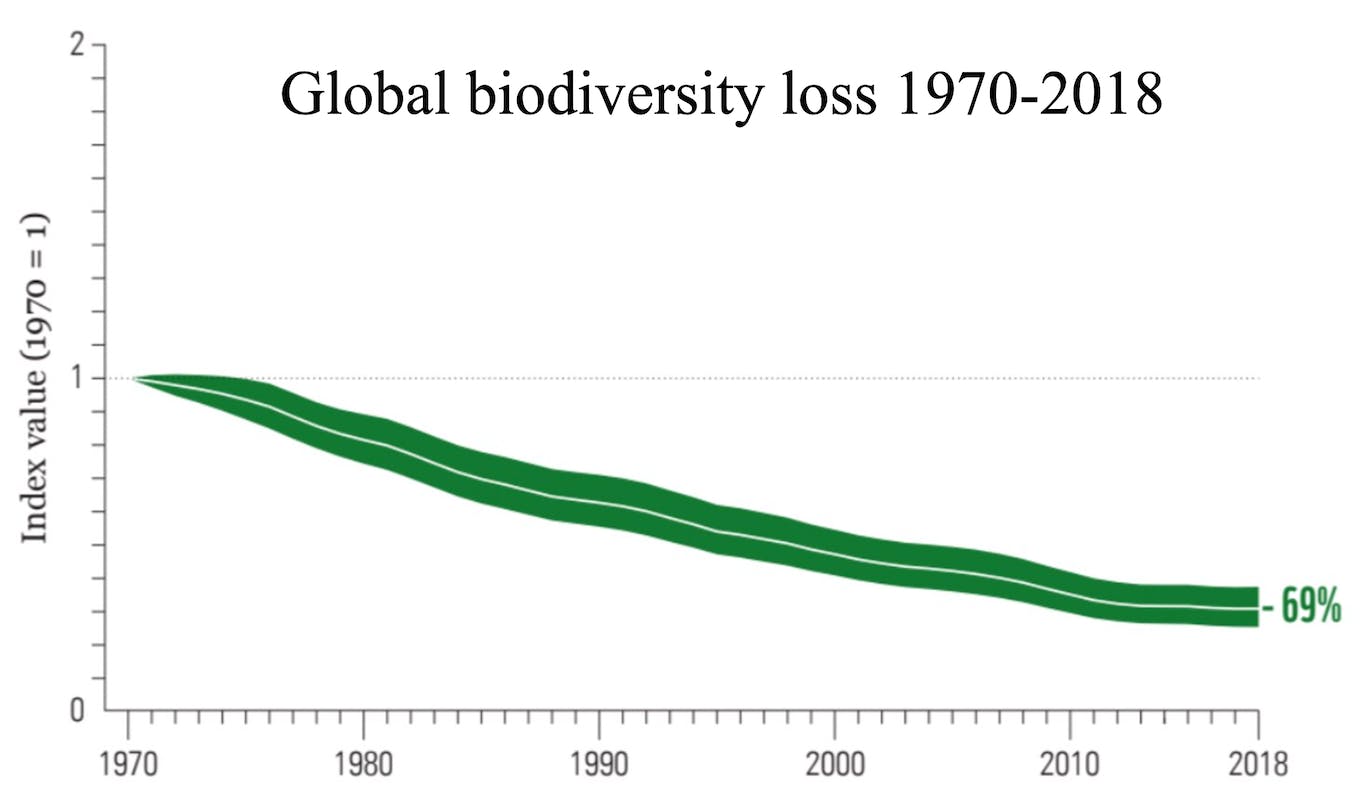 Nature loss in North America and Europe has been less severe, falling by 20 per cent and 18 per cent respectively.

The news is particularly bleak for freshwater ecosystems, which cover less than one per cent of the planet but provide areas for about half of the human population in which to live and prosper.

Life in rivers, lakes, ponds and streams has dropped by an average of 83 per cent since 1970, according to the report. This is partly because of human proximity to freshwater ecosystems, the breakdown in water-body connectivity, pollution, water abstraction and overfishing.

Dams, reservoirs and climate impacts have meant that only 37 per cent of rivers longer than 1,000 kilometres remain free-flowing over their entire lengths, and migratory freshwater fish populations have shrunk by three-quarters as a result.

In Asia, river dolphin populations has fallen, on average, by 73 per cent between 1980 and 2018, with threats such as entanglement in fishing gear, dams, pollution and boat strikes resulting in every species now being classified as either endangered of critically endangered.

The report’s authors comment that nature can bounce back. Replacing the dams on the Mekong River with solar power, and better tracking and regulation of sandmining, could help the world’s largest inland fishery avert a food security crisis for the tens of millions of people who depend on the river.

The removal of dams, and modifications to dams in the Penobscot River in Maine, United States, led to a dramatic increase in river herring numbers, from a few hundred to nearly 2 million in five years, enabling people to return to fishing, the report noted. 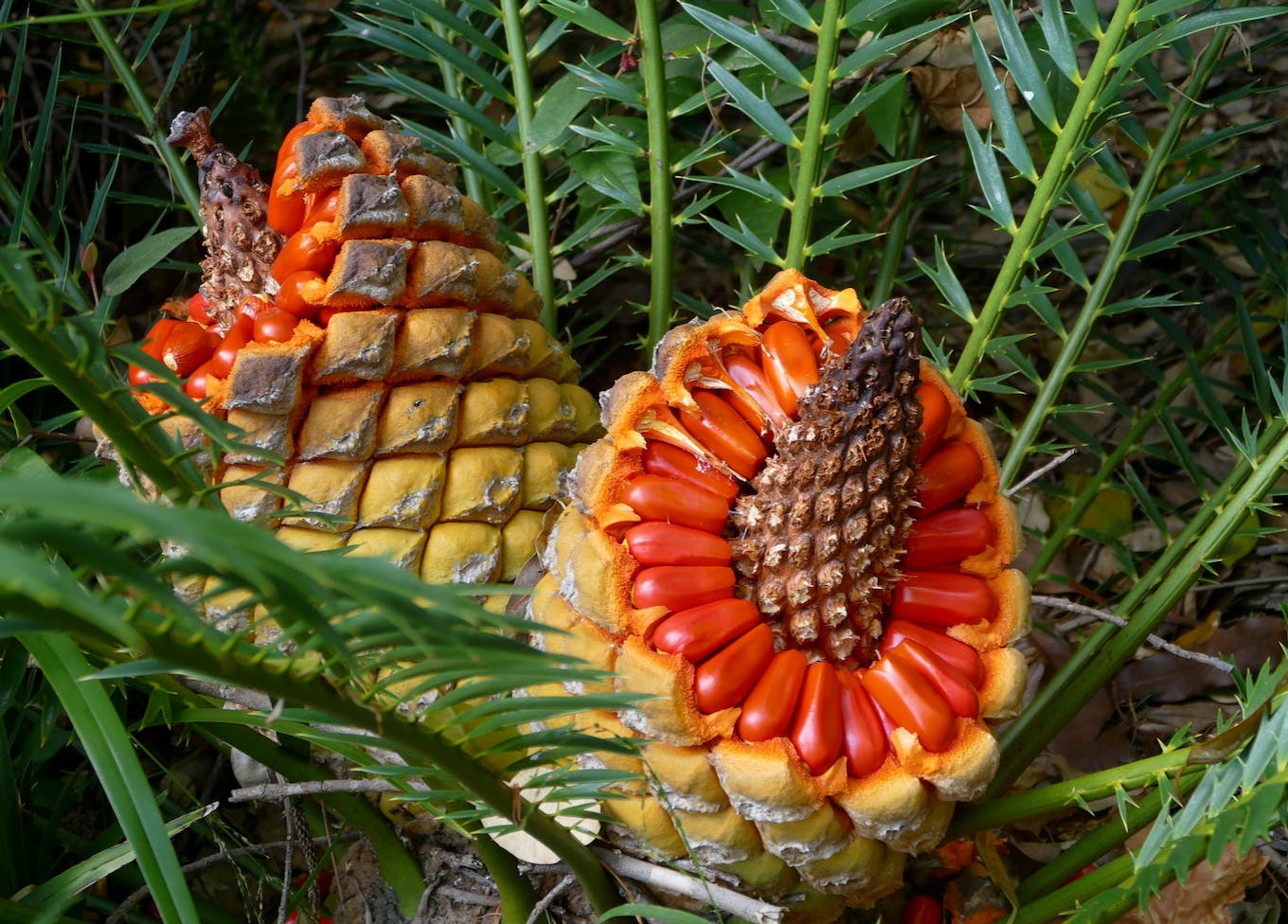 A type of Cycad, the world’s oldest seeding plant. Cycads are at grave risk of extinction because of the destruction of their tropical habitats. Image: The Pocket Rocket/Flickr

Using data from the Red List of Threatened Species, the report found that corals – marine invertebrates that form vast colonies on which millions of fish and other aquatic life forms depend – are experiencing the most rapid decline of the groups studied.

Cycads, an ancient type of plant that appeared before the age of dinosaurs, are the most threatened, mainly due to be the loss of tropical habitats and because they grow slowly and reproduce infrequently. Losing cycads would create ripple effects for other organisms, as they play an important role in fixing nitrogen. Cycad seeds are also commonly used in Chinese medicine. 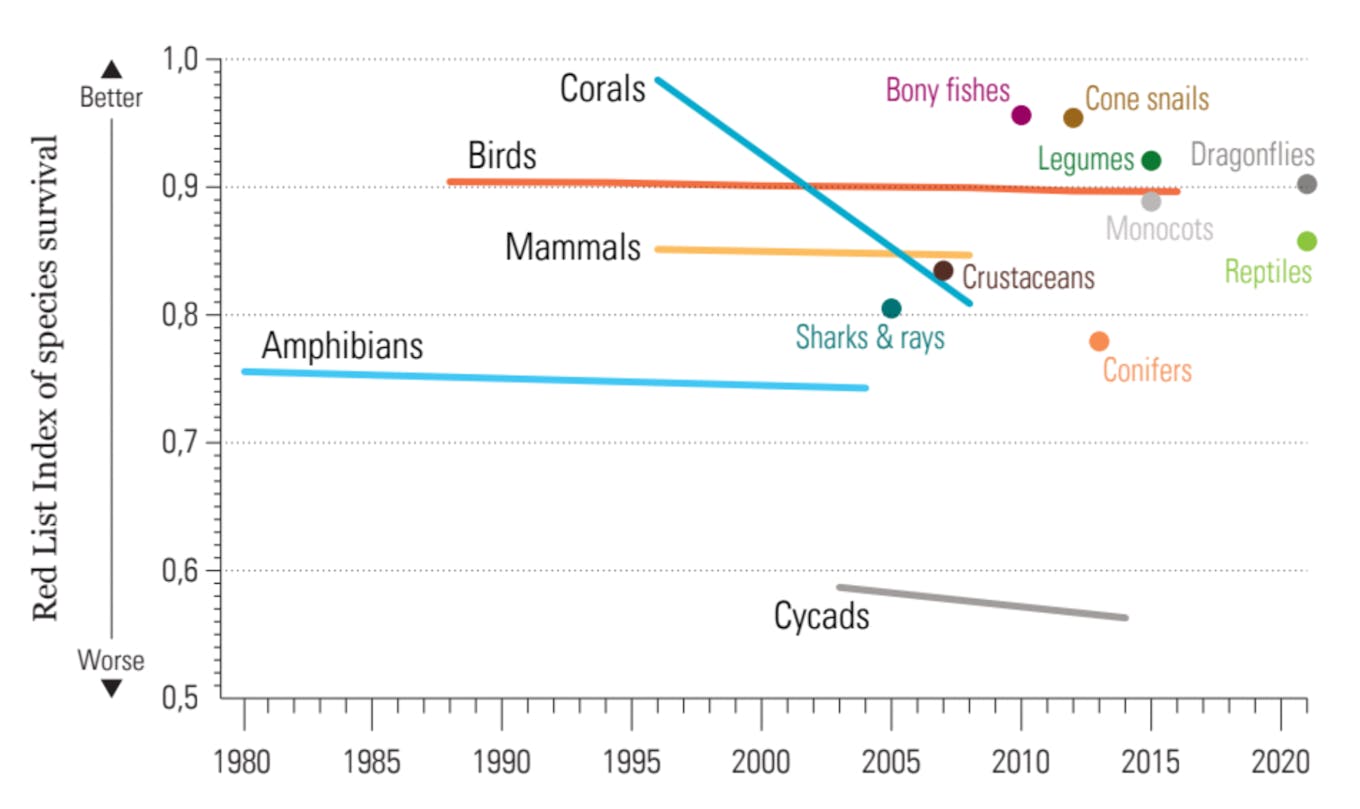 Corals show the steepest decline of five taxonomic groups assessed. Cycads, a primitive group of plants that live in the tropics, are in the gravest danger of extinction. Source: Living Planet 2022

The decline in corals has coincided with dwindling numbers of sharks, marine predators which have existed for at least 450 million years, surviving four of the biggest five historical mass extinctions.

Sharks and their close cousins, rays, have become 71 per cent less abundant over the past 50 years, with pollution and their use for meat, fins and purported medicinal properties responsible for population declines. The oceanic Whitetip Shark, also known as the shipwreck shark, is now classified as critically endangered, its numbers having plummeted by 95 per cent in three generations.

The Living Planet report, using IUCN Red List and distribution data, mapped the terrestrial species most under treat from agriculture, hunting and trapping, logging, pollution, invasive species and climate change. It found that biodiversity is under the most acute threat in Southeast Asia and other tropical hotspots. 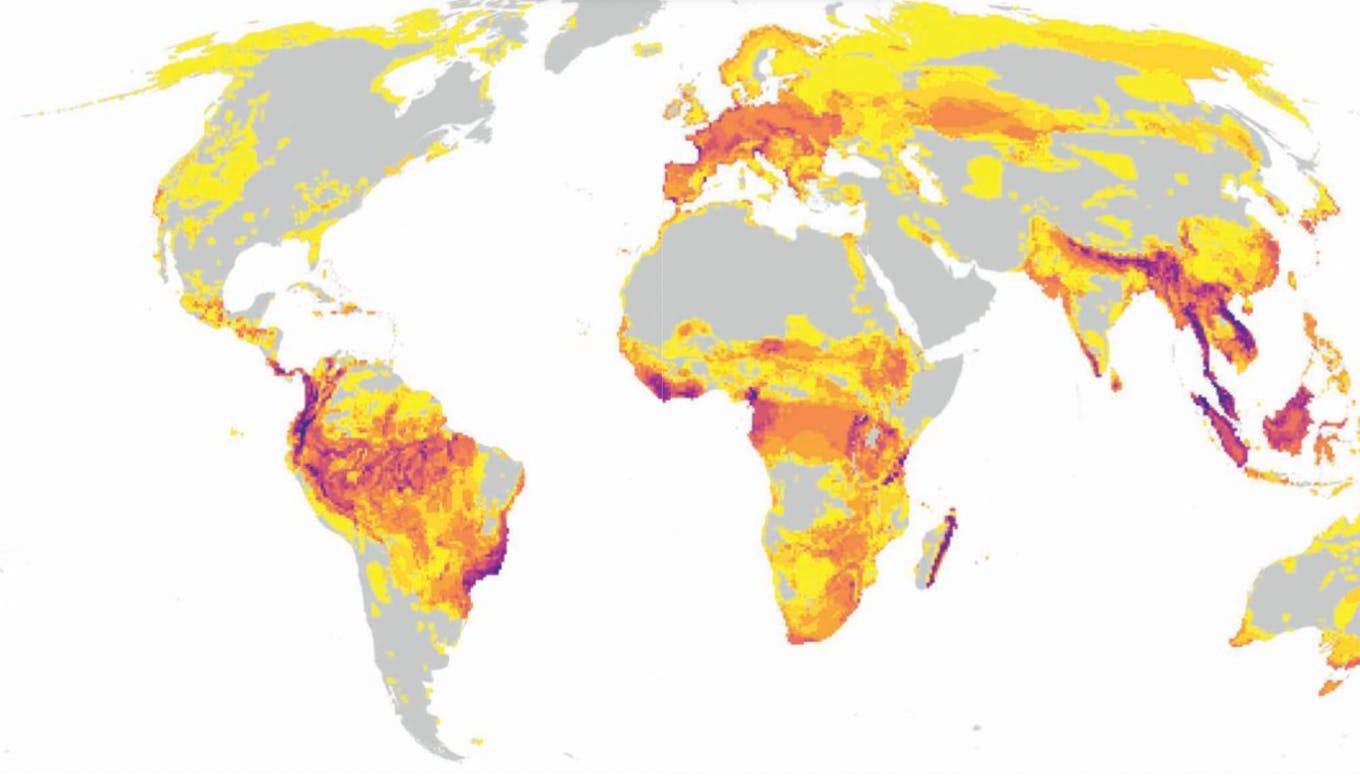 WWF’s report emerges a few weeks before the COP27 climate talks in Egypt, and two months before world leaders meet for COP15 in Montreal to negotiate a deal for nature that observers hope will emulate the Paris Agreement, which was forged to curb the impacts of climate change.

COP15 negotations are expected to lead a commitment to conserve at least 30 per cent of land and ocean by 2030. Though not legally binding, the UN resolution aims to recognise the link between nature loss and climate change.

The Living Planet report concluded that while land-use change is currently the biggest threat to nature, if the 1.5°C Paris Agreement warming threshold is eclipsed, climactic events will become the dominant cause of nature degradation in the coming decades.

“Rising temperatures are already driving mass mortality events, as well as the first extinctions of entire species. Every degree of warming is expected to increase these losses and the impact they have on people,” the report said.

The report’s authors noted that COP15 is the “last chance” for humanity to halt, and reverse, nature loss and work towards restoring the land and marine ecosystems on which humanity depends.

The COP15 talks have already been delayed twice and progress is said to be slow, with countries such as Brazil actively opposing a global agreement on nature preservation.

“It’s essential this agreement delivers immediate action on the ground, including through a transformation of the sectors driving nature loss, and financial support to developing countries,” said Marco Lambertini, WWF’s director general.