Climate change will heighten the risk of production shocks across the world’s biggest crop producers, a new study finds.

The 1972-74 food price crisis is the stuff of policy legend. At a time when grain prices had been declining for decades, the global price of wheat tripled in the space of just three years.

The trigger was a poor wheat harvest throughout the major breadbaskets of southeast Ukraine and southwest Russia, ravaged by an extremely hot summer with average temperatures 2-4°C warmer than usual.

The effects of the resulting “Russian Wheat Deal” – in which the USSR purchased 10m tonnes of US wheat – rippled across the global food market and global grain prices soared.

Since the early 1970s, global food markets have only become more integrated. Just three staple crops – corn, wheat and rice – account for more than half of global calorie intake. For each of these crops, just three countries produce at least 40 per cent of global production.

With growing demands for food, animal feed and biofuels, this leaves the global food market exposed to further price shocks. In 2007-08, for example, the overstretched grain market needed only relatively small crop losses in Australia (caused by heatwaves), record-high oil prices and poor policy choices to cause the world food crisis of 2007-08. The result was a doubling of cereal prices and food riots in dozens of countries.

In a new paper, published in Proceedings of the National Academy of Sciences, my colleagues and I show that climate change will heighten the risk of production shocks across the world’s biggest crop producers.

The summer of 1972 was one of the 10 per cent hottest Ukrainian summers of the last century. But, by the middle of this century, these kind of summers could become the norm, if global carbon emissions continue unabated.

Modern-day crops have been bred and selected over decades and centuries to thrive in our climate, but they perform poorly beyond an optimum temperature threshold.

You can see this in the chart below. It shows an illustration of how crop yields vary with average temperature – rising to a peak (indicated by the black diamond) in the most favourable conditions, before declining again as temperatures increase further.

An increase in global temperature causes a shift further to the right on this curve (see red dot). In this warmer world, crop yields will not only be lower on average, but also more volatile on a year-to-year basis as conditions exceed optimum levels more frequently. 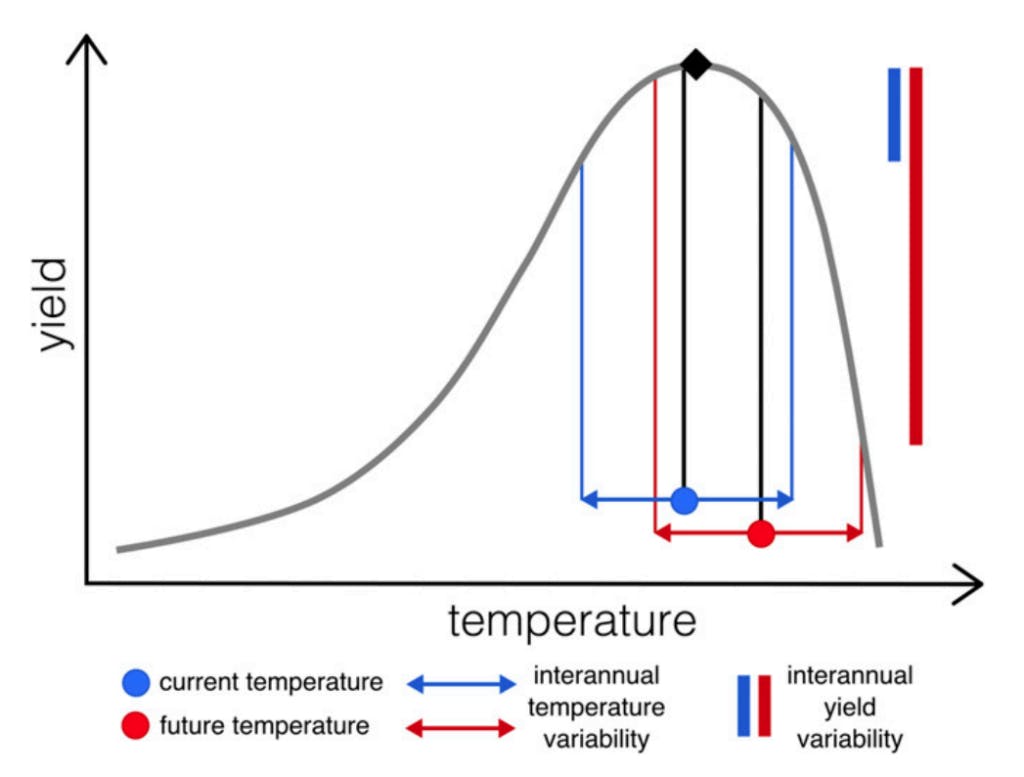 In our study, my colleagues from the University of Washington, Stanford University and University of Minnesota and I combine data of past corn yields and climate variability with future climate projections to assess how likely corn production shocks will become in world that is 2°C or 4°C warmer than pre-industrial levels.

Corn is the most grown crop in the world by volume. It plays an important role in international food markets due to its multiple uses – not just for human consumption, but also as an animal feed, a sweetener and a biofuel. We find that in nearly all locations where corn is currently grown, yields will decrease in response to warming.

You can see this in the maps below, which show projected corn yield changes under 2°C (left) and 4°C (right) of warming. The shading shows yield gains (green) and declines (purple).

Four countries – the US, China, Brazil and Argentina – produce more than two thirds of the world’s corn. In these countries, we project that the mean total production will decline by 8-18 per cent if the planet warms by 2°C, and 19-46 per cent with 4°C of global warming.

This greatly outweighs the small areas of projected yield increases in western Europe and southern China.

Currently, on average, 986m tonnes of corn are produced globally each year – 125m tonnes of which are traded internationally. Our work suggests that in response to 2°C of global warming, total production in the top four corn exporters (the US, Brazil, Argentina and Ukraine) would decline by 53m tonnes – equivalent to around 43 per cent of current global exports.

For 4°C of warming, projected production declines in these countries increase to 139m tonnes, which equals 14 per cent of current global production and exceeds present day exports.

Our findings also indicate that not only will average corn yields drop, but that their volatility will increase.

Extreme crop losses in large producing areas are rare: only every 15-to-100 years do we see yield losses greater than 10 per cent and those greater than 20 per cent are virtually unseen.

But these kind of losses become increasingly likely in a warmer climate. This is illustrated in the charts below. They show the probability of different yield levels for the six largest corn producing countries under today’s climate (black line), 2°C of warming (blue) and 4°C of warming (red).

From the black lines, you can see that yields tend to vary by a maximum of around 20 per cent either side of average (zero on the x axis). But, as the world warms, this variability widens, with large below-average yields becoming increasingly possible.

In the Ukraine, for example, our projections suggest that under 4°C of global warming there will be occasional years in which the entirety of the crop is lost. 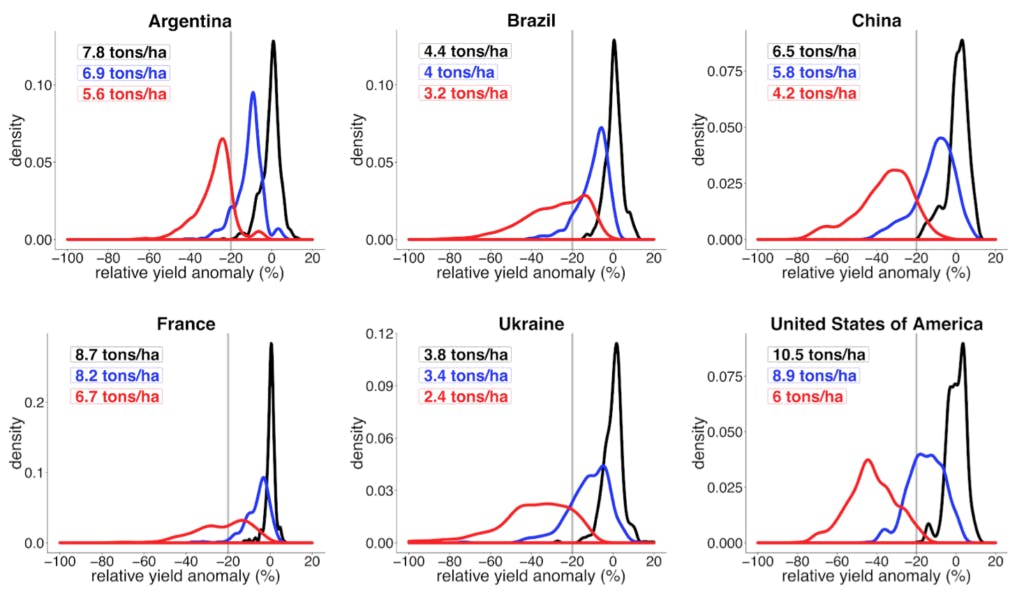 The risk of simultaneous crop failures across multiple corn exporters is also expected to increase in a warmer climate.

Today, the chance of the top four corn exporters having production losses of more than 10 per cent in the same year is close to zero. However, our findings suggest this likelihood increases to 7 per cent under 2°C warming and 86 per cent under 4°C.

Such synchronised production shocks are likely to have tremendous impacts on global cereal markets.

Volatility in global grain prices can result from food production shocks in both exporting countries (reducing supply) and importing countries (increasing demand). Simultaneous production shocks amongst these trading countries will impact those who rely on international trade for affordable food supplies: urban consumers, agribusiness, grain producers, the 2.5 billion people who spend most of their income on food, or the many more people that will populate the planet by 2050.

Trade policies – and the extent to which they aim to insulate domestic markets from international price fluctuations – play a crucial role in either amplifying or mitigating the effects of global market volatility. With demand for grains on the rise and governments increasingly intervening in staple grain markets, the pattern of high price volatility of the last decade will likely persist – and be intensified by a warming climate.

Rising temperatures are by no means the only threat to our global food system: competition for water, a growing population and a growing consumption of animal protein, as well as degradation of fertile land all play their part. Climate change is an unwelcome guest to this party of challenges.

The 2°C and 4°C warming scenarios used in our study present vastly different visions of the future. A 2°C warming limit is enshrined in the Paris Agreement, but current commitments are insufficient to get us there. Warming the planet by 4°C would take another eight or so decades of emitting carbon at our current rates.

With 1°C of global warming so far, technological yield gains have been able to outpace the negative impacts of a warmer climate. But unless major gains are achieved in breeding crops for heat tolerance, avoiding a low-yield, high-volatility future rests heavily on how quickly global CO2 emissions can be curtailed.