The City of Sydney council has once again urged Sydneysiders to voice their opposition to uber-highway project WestConnex to the state government.

Days before mega-motorway project WestConnex closes the window for public feedback on its environmental impact, the City of Sydney council called on Sydneysiders to urge the project developers and the New South Wales (NSW) government to re-think plans to build the road.

In a public meeting held at Town Hall on Wednesday, City of Sydney Lord Mayor Clover Moore told a crowd of more than 300 residents that WestConnex, which according to the company building it is one third of the way to completion, will not solve Sydney’s connectivity problems.

Instead, it will saddle residents with expensive polls for more than four decades, increase emissions from transport by facilitating car use, and worsen pollution in the city, said Moore, who has been the City of Sydney’s Lord Mayor since 2004.

The project “is not, and should not be inevitable”, Moore said, and urged the crowd to email NSW Premier Gladys Berejiklian to re-think plans for the final stage of the project.

While Moore heads the council that governs a 26 square-kilometre area in central Sydney, she has little legal say in the WestConnex project as it has been pushed through by the NSW and Australian federal government.

The largest transport infrastructure project in Australia, WestConnex has five key components: Widening the existing M4 motorway between Western Sydney suburbs Parramatta and Homebush from three lanes to four lanes; Extending the M4 in tunnels between Homebush and Haberfield suburbs; building a new tunnel on the M5 motorway and a new interchange in St Peters; and building tunnels to connect the new stretches of the M4 and M5 motorways. 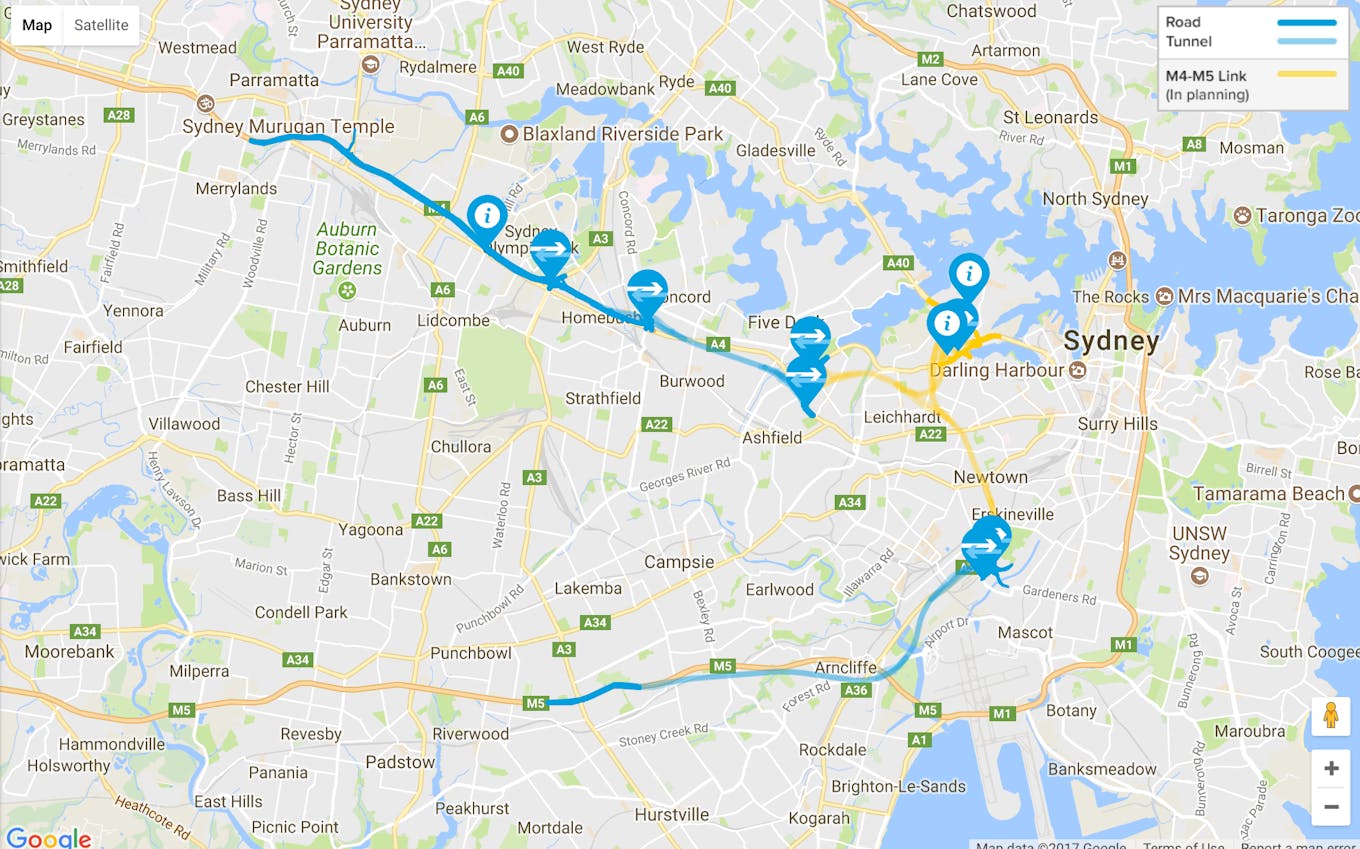 The project will total about 33 kilometres. According to its supporters, it will ease congestion on existing roads by expanding the capacity of motorways and enabling commuters to bypass traffic lights, “return local streets to local communities” by diverting traffic underground, and boost the city’s economy by providing “vital links” to the airport and port.

WestConnex’s estimated cost is currently A$16.8 billion (US$13.2 billion) according to the state and federal governments’ estimates, but it has ballooned from A$12 billion when the project was first proposed in 2012. It will be funded through private sector partnerships as well as tolls paid by motorists.

WestConnex is currently inviting public feedback for its environmental impact assessment for stage 3, which is in the very early planning phase, and entails linking the M4 and M5 motorways, along with ancillary roads into Sydney’s harbour.

However, opponents of WestConnex say it will deliver none of the promised benefits, and harm the community by worsening air pollution across the city, causing unprecedented traffic congestion, and imposing a heavy cost on motorists and transport workers through taxes and tolls.

For instance, part of the plan for Stage 3 of Westconnex is to build exhaust stacks for tunnel exit and entry points along the route; but many of these stacks will be located close to homes and public schools, and spew toxic exhaust from vehicles into neighbourhoods, according to reports.

The City of Sydney also claims that the increased traffic that WestConnex brings into the city will cause a tenfold increase in particulate matter, the most harmful form of air pollution, in Inner Sydney.

Additionally, the total costs associated with WestConnex could spiral to A$45 billion, the City council says. A report by the City of Sydney also estimates that the road will save most people a mere five minutes on their commute, and will set them back about A$8,000 per year in tolls.

The City also points out that despite the massive spending on the project, WestConnex does not actually provide a direct connection to the airport or adjacent port, despite this being the original justification for the road.

Instead of going ahead with plans for Stage 3 of WestConnex, the NSW government should accelerate public transport development plans, remove the high fees to access the airport train station, and charge for road access to airport car parks, the City has recommended.

It also suggested some changes to Sydney motorways that could solve current congestion and connectivity challenges. These include adjusting the project to build new M5 tunnels so that it actually connects to the airport and Port Botany; and link it to the Eastern Distributor highway so that it helps manage existing congestion and creates a ring road around the city. 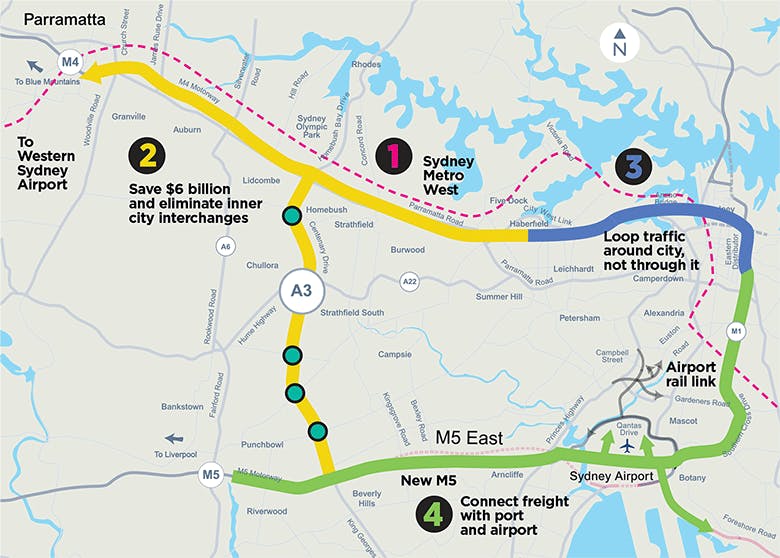 “WestConnex is not a done deal yet,” said Moore. “And it should not be too late to stop its full horror.”

Academics agreed with the some of the City’s alternative plans for WestConnex, but said that it was perhaps too early for a definitive verdict on its true impact on the city.

Michiel Bliemer, professor and chair in transport network modelling, University of Sydney, told Eco-Business that the City’s recommendations to accelerate public transport plans and remove fees to access the airport by train are a good idea.

“That should definitely be done, but the question then is, do we need WestConnex?”

While bringing forward plans for already-approved public transport may make sense, building more new public transport infrastructure to service the suburbs might not be possible because the population density is too low to economically support the transport operators, Bliemer explained. In many parts of the city, driving is the only option.

Increasing population density must precede an expansion of public transport infrastructure such as a metro line, Bliemer explained, adding that cost-benefit analysis by WestConnex has shown that the road would deliver some reductions in travel time. How the cost-to-benefit ratio is affected by WestConnex’s ballooning cost is a challenge for the project managers, he added.

Areas of uncertainty in the project’s future include whether the number of road users will meet expectations or whether the tolls will be prohibitively costly and result in lower usage than expected; whether the rise of electric cars will help address some of the air pollution-related concerns in the long term; and how the government’s ongoing efforts to improve public transport infrastructure will affect transport patterns in the city.

“Currently, the benefits do outweigh the costs,” said Bliemer. “But the question is, would you get more benefits if you put your dollars somewhere else?”