Circular solutions struggle to make an impact in disposables-reliant Singapore

The country's first ever container lending service Barepack Singapore will soon be shutting down local operations. Sustainability leaders say more regulation is needed before reusables can compete with single-use.

Container lending service Barepack Singapore’s journey will soon be coming to a close.

The start-up announced in June that it will be shutting down operations in Singapore this week, thanking users for their support.

“It is our greatest regret not being able to continue our services in Singapore,” wrote country manager Linh Le on the company’s page. Le is also the co-founder and chief executive of Barepack.

The start-up did not offer further reasons for its decision and has declined requests for comments, but its halting of local operations has sparked discussions within the industry on the challenges of curbing disposables in Singapore. 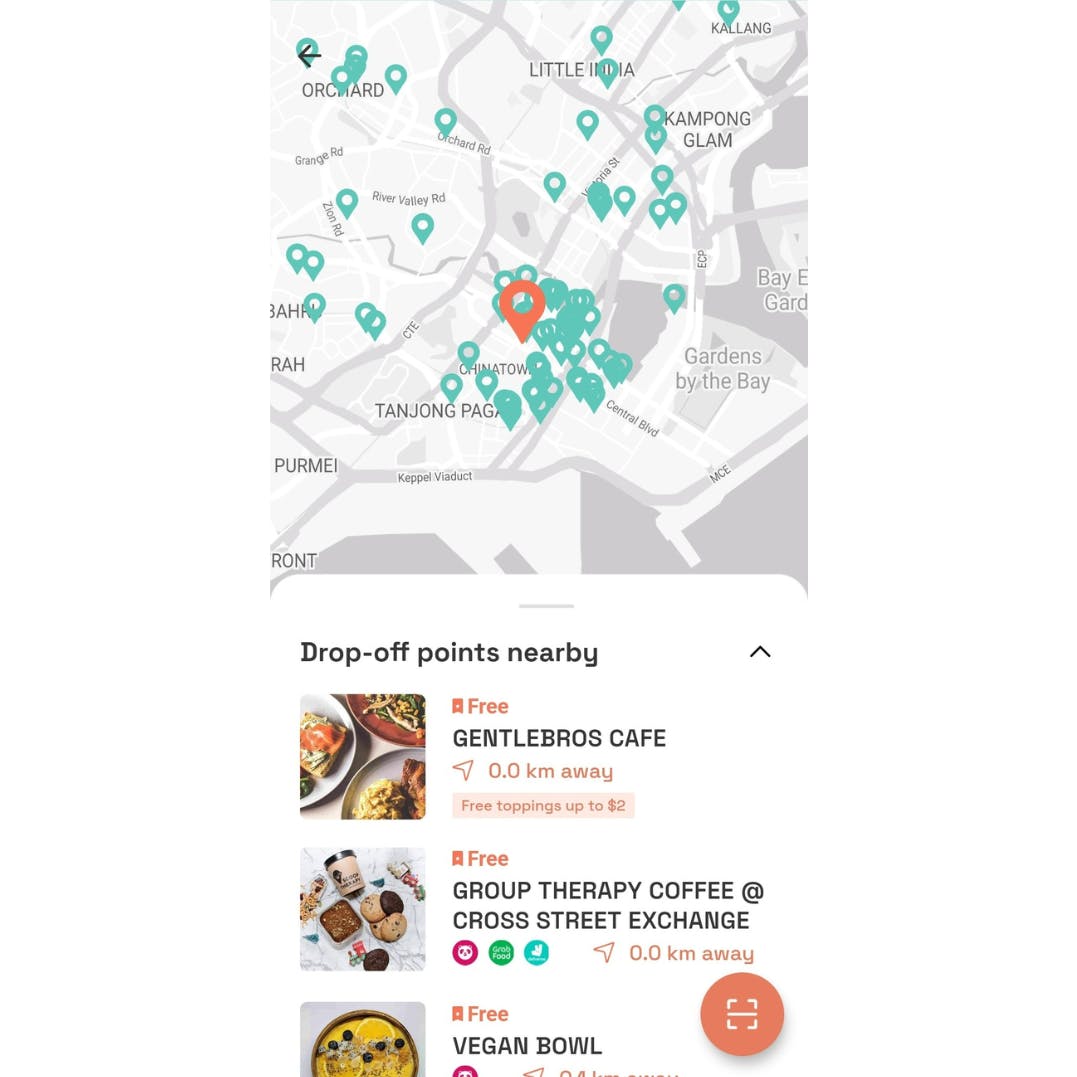 Screenshot of drop-off locations on the Barepack app.

Barepack first launched in Singapore in 2019 as a sustainable food packaging solution. Users could “rent” reusable containers for takeaway at participating eateries, offering a convenient alternative to carrying bulky containers around. Containers could then be returned to any outlet in Barepack’s network.

In two years, the start-up on-boarded over 150 local eateries such as Spizza and Grain Traders. Barepack also partnered with Singapore’s three largest food delivery platforms – GrabFood, Deliveroo and Foodpanda – to offer their containers for delivery orders.

The company expanded operations to Paris in 2021, soon emerging as the largest reuse network in France. Barepack was then acquired by &Repeat – a European start-up that rewards customers for recycling disposable food packaging – in February this year. But sustainability leaders interviewed said that the company’s impending closure locally hints that Singapore still has a long way to go in embracing circular solutions.

Singapore’s heavy reliance on single-use packaging has been thrown into the spotlight in recent years, especially as the nation’s only landfill, Pulau Semakau, rapidly moves towards full capacity. A 2018 study by the Singapore Environment Council found that Singaporeans use 473 million plastic disposables – mainly takeaway containers – each year.

Tan Hui Leng, executive director of non-governmental organisation Zero Waste SG, said that based on interactions with the general public at roadshows, people are aware of the concept of Bring Your Own (BYO), but awareness has not yet translated into action.

“People tell us they want to BYO but sometimes forget to bring their containers out,” said Tan. “Conceptually, brands like Barepack and Muuse can fill that gap since their containers are offered at the eatery itself.”

Muuse is another container lending service headquartered in Singapore, and operates on a similar model as Barepack.

In practice, however, it appears most consumers do not make use of such services.

At food chain SaladStop! which offers both Barepack and Muuse, chief brand officer Katherine Desbaillets says there has been little change in the number of customers borrowing containers at their stores since 2019.

“We only saw an increase in uptake when we implemented discounts up to two dollars off, but that is a very heavy incentive. We cannot afford that cost,” said Desbaillets.

SaladStop! now offers a free topping for customers who use Muuse or bring their own containers. At its CapitaSpring outlet located at the heart of Singapore’s Central Business District, it has put up a large stand featuring Muuse to encourage more customers to use their containers. These marketing efforts have led to about 5 per cent of customers at CapitaSpring using resusables, compared to 3 per cent at other outlets.

“But the reality is that most customers still do not use Muuse and are not even appreciative of these initiatives,” Desbaillets said.

Jonathan Tostevin, chief executive officer of Muuse, told Eco-Business that uptake of their services has been “relatively slow”, though the company did not provide further statistics when asked to. “The numbers may not be worth sharing at this point,” he said.

Delivery company Foodpanda also did not directly respond to queries on how many of its customers use barePack or Muuse. “We had hundreds of restaurants that offered Barepack and Muuse, and we have plans to grow and scale this. Increasing the number of restaurants that offer reusables will inevitably increase the number of customers that choose reusables,” said its marketing and sustainability director Laura Kantor.

The reality is that most customers are not even appreciative of initiatives to incentivise reusables.

Not a level playing field

Why have circular solutions in Singapore not taken off? Tostevin points towards convenience as the main hurdle.

“Even with systems like Muuse, reusables are still opt-in. Customers have to install our app, scan a QR code, and then return the container afterwards. Using our containers may be easier than BYO, but it is still more work than single-use,” he said.

The pandemic also changed people’s dining habits, said Tostevin. During a nationwide partial lockdown from 7 April to 1 June 2020, Singapore generated an additional 1,334 tonnes of plastic waste – equivalent to the weight of 92 double-decker buses – from takeaway and delivery meals, according to a study by alumni students from the National University of Singapore.

Another issue is accessibility. Barepack’s network spans 150 eateries while Muuse has about 80 partners – an extremely small percentage of Singapore’s 13,000 food and beverage (F&B) establishments. A quick check of barePack’s partner menus also found that a main course tends to cost at least $15 (about US$10.70), excluding delivery fees.

“There is a bit of a mismatch because the containers are not offered at hawker centres where most people dine. So on the ground, consumers may not really know that these services exist,” said Zero Waste SG’s Tan.

“Some may also feel that BYO is easier since there is more flexibility in choosing where to eat, rather than only eateries within (barePack and Muse’s) network,” Tan pointed out.

While Muuse is keen to expand to hawker centres, the start-up has encountered multiple logistical barriers such as not being able to tap on centralised washing facilities which tend to be contracted to external parties, or hawkers not having sufficient space to store Muuse containers.

Muuse’s services also come at a cost – while they are free for customers to use, partner eateries are charged a small fee for each container loaned out. This is on top of having to store and clean containers, as well as preparing extra communications that may be needed to educate customers about Muuse.

Given these challenges, is Tostevin worried that Muuse may soon meet the same fate as barePack in Singapore?

“Our model works at scale. Imposing a packaging fee with just 80 vendors across the city… that is not keeping the lights on,” admitted Tostevin.

“But if we talk about thousands of vendors doing transactions every day, that starts to look quite positive from a financial point of view. That is the long term goal,” he said.

Both Tostevin and Tan agree that more regulation is needed to help level the playing field between reusables and disposables in Singapore, given that single-use is currently cheaper – not just in terms of cost, but also time and effort.

”We have to work on all levers. Education is useful because we need people’s buy-in to drive habit change, whereas harder changes would move the needle in a more impactful way,” said Tan.

While Singapore’s National Environment Agency has disallowed disposables for dine-in meals at new hawker centres since 2018, some have advocated for this scheme to be extended to more eateries. Meanwhile, the government has adopted a highly cautious incremental approach toward charging single-use, with a 5-cent disposable bag charge set to kick in across large supermarkets next year – nearly seven years after Zero Waste SG first called for a mandatory plastic bag charge.

Tostevin says a charge on other forms of single-use could be the next step to effectively change consumer behaviour.

“Ultimately, it is about creating a whole new system, be it through regulation, incentivising, or disincentivising,” said Tostevin. “Until regulation comes in to encourage reusables, it is always going to be difficult to compete against single-use.”