Can a palm oil company have social impact?

With issues such as child labour and forced labour making headlines, palm oil companies are realising that more needs to be done to protect their workforces and their families. 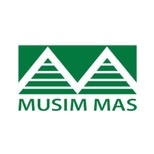 Life on a palm oil plantation in Indonesia is no picnic.

On a typical day, a farmer will start work at 5am. They will harvest fresh fruit bunches that each weigh up to 25 kilograms using a long sickle, dodge out of the way as they fall, pick up the loose fruit, and lug the load around in the tropical heat to meet a quota. A single farmer may harvest between 300 to 500 trees a day, ensuring that the fruit bunches are delivered to the mill within 24 hours of the harvest. Spraying heavy-duty pesticides, herbicides and fertliser, while avoiding stepping on snakes, are other aspects of the job of producing an oil found in half of all packaged supermarket products.

The 50 million people in Indonesia who depend on palm oil to make a living have long been overshadowed by well documented environmental issues; of bulldozed forests, burning peatlands and displaced orangutans roaming scorched landscapes. But the focus is shifting to the social underbelly of the industry, as cases of child and forced labour make headlines.

There is growing recognition that human rights and equity underpin efforts to protect the environment. The people most impacted by climate change tend to be the poor, older people and children and families. A failure to address social issues could be deadly for the most vulnerable. “Achieving environmental targets can be done over years, but eliminating forced labour or other such abuses cannot wait,” says Steven Okun, founder of APAC Advisors, a sustainability consultancy. “There is no transition period when it comes to human rights.”

Palm oil companies, and the consumer brands they supply, are under greater scrutiny for their treatment of workers and the communities who live on and around plantations, says Kamini Visvananthan, the former human rights and social standards manager at Roundtable on Sustainable Palm Oil (RSPO), who now works for InsAight Consultancy.

Ensuring fair working conditions for migrant labour is a big issue in Malaysia, the world’s second biggest palm oil producer. Women who work alongside men on plantations, are not counted as plantation workers, leaving them vulnerable to exploitation. Children, particularly in Indonesia, the world’s biggest palm producing country, also form part of an invisible workforce. “If both parents are working, who takes care of the child? If there’s no child care, children are often brought on to the plantation to help out their parents,” says Visvananthan.

Singapore-headquartered palm oil company Musim Mas has been working to address these issues, and updated its sustainability policy last year to focus on improving the livelihoods of workers and communities in its supply chain. In May, it published its first social impact report. The firm employs more than 37,000 people in its plantations and mills in Indonesia, and relies on hundreds of thousands of smallholders who supply its mills. The biggest challenge, according to head of sustainable supply chain Olivier Tichit, is that social impact is a moving target. “The question is how to keep up with what people need and want, and keep our finger on the pulse,” he said. “People may not want the plantation life, so we’ve got to give them the best possible working conditions.”

The firm’s scheme smallholders — that is, small farmers contracted to supply Musim Mas — earn 60 per cent more than the minimum wage in Riau Province.

74 villages enrolled in the firm’s fire-free village programme. IDR 3 billion (US$206,697) awarded to villages for staying fire-free for the past 3 years.

5,983 students are enrolled in Musim Mas schools; 47 per cent of are girls.

Musim Mas teachers earn 88 per cent more than the average income for teachers in Riau.

Musim Mas uses a mixture of hard data, such as comparing the incomes of plantation families versus the regional and national average, and more qualitative metrics, such as how people’s lives have changed as a result of its social programmes to measure their effectiveness. “Social impact measurement is part art, part science,” said Jessica Wettstein, senior consultant at Corporate Citizenship, who ran the research for Musim Mas’ social impact report.

Weeding out child labour is a particularly difficult issue. Poverty forces some families to take their children out of school to help harvest the crop to maximise income. Musim Mas tries to keep children out of plantations by providing free schooling for all ages, and in some areas offers pre-kindergarden for toddlers, if both parents are working. The company has built and funded nine schools in Indonesia. School closures due to the Covid-19 pandemic may have reversed some of these gains, with children returning to work on plantations with their parents, says Visvananthan.

Forced labour is also hard to identify and resolve, as workers fear reprisals for speaking out against abuse. Musim Mas put in place a grievance mechanism in 2016, enabling workers to anonymously make complaints on its website, by letter or text message. Tichit says the company is fortunate that there are not many cases of reported abuse, but worries that workers have not been provided with the right tools to report violations.

Supporting the people outside of their immediate sphere of influence is also tricky for palm oil firms. Musim Mas relies on independent smallholder farmers for 40 per cent of the palm oil it processes in Indonesia. But smallholders tend to lack the training for sustainable cultivation, which means they produce less, are not as profitable and shoulder the blame for cutting trees and burning land. They also lack access to the finance needed to support sustainable cultivation methods. Musim Mas runs a programme to help these farmers get RSPO-certified and raise their sustainability game, and 1,733 scheme smallholders are now certified sustainable farmers. 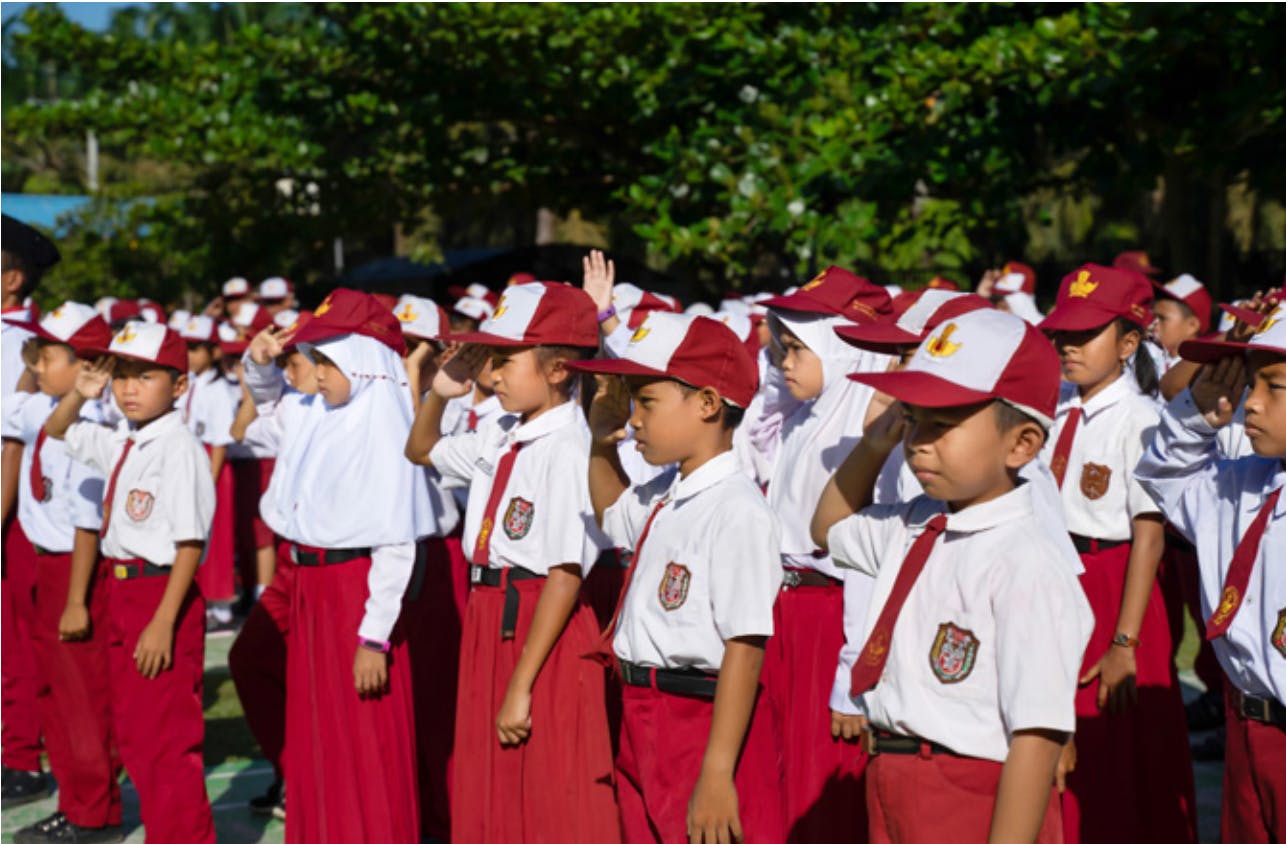 Defining a decent living wage for workers and suppliers is another riddle for palm oil companies. “The problem with defining a living wage is that there isn’t one set definition,” said Thomas Milburn, Southeast Asia director of Corporate Citizenship. “”We looked at international benchmarks, but focused on the local context, and how wages compare to the provincial minimum.”

According to a report by think tank, Chain Reaction Research, smallholders generate US$17 billion of the palm oil sector’s value globally, and yet they earn an average of just US$7,540 a year. However, smallholders contracted to Musim Mas tend to generate a high yield through training and other means of support, and earn 60 per cent more than the regional average, the company declares in its social impact report.

RSPO launched a guide for palm oil companies to work out a decent living wage for their workers in 2019, as part of its principles and criteria for pushing sustainability into palm oil companies. The living wage is based on what is deemed sufficient for the worker and his or her family to afford a basic but decent lifestyle, including decent housing, sanitation, clean water, medical care, and schooling.

The industry has a responsibility to lift people out of poverty and grow responsibly too — and that can be challenging. We’re only just learning what is feasible at scale.

Though life on a palm oil plantation is not easy, many palm oil companies are offering their workers a better standard of living than workers on tea or cocoa plantations, says Visvananthan. Some, like Musim Mas, give their workers free housing, transport and schooling, and these benefits should be factored into the calculation for what makes a decent living wage, she said.

Palm oil companies should also ensure that no-deforestation commitments do not come at the expense of social development, Visvananthan said. Communities feeding the workforce should be helped to reduce their reliance on the cash crop and to build reslience against market shocks, like Covid-19, by developing an alternative means of income by growing a variety of crops, according to Visvananthan. 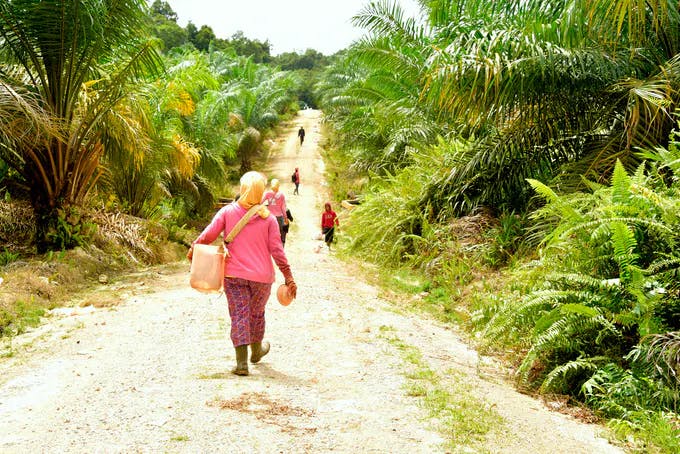 Rising attention on women’s rights violations in the palm oil industry have forced companies to improve the welfare of their female workforce. Image: CIFOR, CC BY-NC-ND 2.0

Ensuring women are safe on plantations and get a fair deal is still missing from many palm oil firms’ social programmes, and reports of sexual abuse and harassment on plantations last year highlight the need to better protect women in the palm oil trade. Maternity cover is one way women and young infants could be better supported, says Visvananthan, noting that women have been known to return to work a week after they have given birth, because they cannot afford not to work having a detrimental impact on both mother and child.

Musim Mas’s first social impact report highlights how the company’s programmes have increased the proportion of girls in schools. But Milburn concedes that the report “is not perfect” and there are elements that the company will need to look at in more detail ahead of the next report. “Musim Mas does not want blindspots. We need to look at the negative impacts of operations as well as the positive,” he said.

Milburn noted how far the palm oil trade has come in the last 10 years in tackling social issues such as child labour and gender inequality, and says that the nature of the agricultural sector makes staying on top of these “complex, developing issues” an ongoing challenge.

Perhaps the most important way to ensure better lives for workers and their communities is to find ways to keep people together — which is difficult in a pandemic. “Life on a plantation is hard. So you need to create and sustain a community to keep people happy,” says Visvananthan. “If there’s no sense of community, people will leave eventually.”