Led by American non-profit Clean Creatives, it aims to reach 1,000 public relations professionals in Asia Pacific by the end of 2022. Will the campaign gain traction in the fossil fuel-dependent region?

A campaign has launched to persuade communications firms in Asia Pacific to stop working for fossil fuels brands.

The Clean Creatives pledge has amassed hundreds of signatories to date, mainly among Western communications firms. The movement has gained little traction in Asia to date. PR network Vero, founded by American Brian Griffin, was the first Asia-based firm to take the pledge in September this year.

Clean Creatives started in 2020 and is aiming to reproduce the success health campaigners had in quashing tobacco marketing in the 1970s, and fight the climate crisis by curbing publicity for fossil fuels brands.

Among the initiatives to promote the movement is a panel discussion titled “Should PR cancel or counsel?” to be held on 27 September.

The discussion will tackle the question of whether PR firms should stop working for dirty energy brands or keep them on as clients and advise them to switch to clean energy instead.

The question is: are PR agencies helping to change the behaviour of fossil fuel firms – or are they just giving them cover?

Meisel is aiming to reach more than 1,000 PR professionals in the region by the end of 2022 through a media and marketing campaign, and by speaking to communications students.

Persuading PR firms to quit fossil fuels might not be easy in a region where the energy transition has been slow.

Arun Sudhaman, editor-in-chief and chief executive of PR industry journal PRovoke Media, said PR firms in Asia don’t earn as much revenue from fossil fuels brands as agencies in the United States and other developed markets, so the opportunity cost of avoiding dirty energy brands is low.

However, he said that PR firms don’t want to be seen to be “deserting” the industry by turning their backs on a signicant part of the sector. “That is what really concerns them – especially international agencies with offices in Asia,” he told Eco-Business.

PR firms that stick with fossil fuels clients often argue that they can influence these companies, and advise them to pivot to renewables, but there is little evidence of this happening, noted Sudhaman.

Agencies may say there are helping fossil fuels brands to change, but often they are just providing “cover”, and masking the majority of the business that is still entrenched in carbon-intensive fuels, he said. 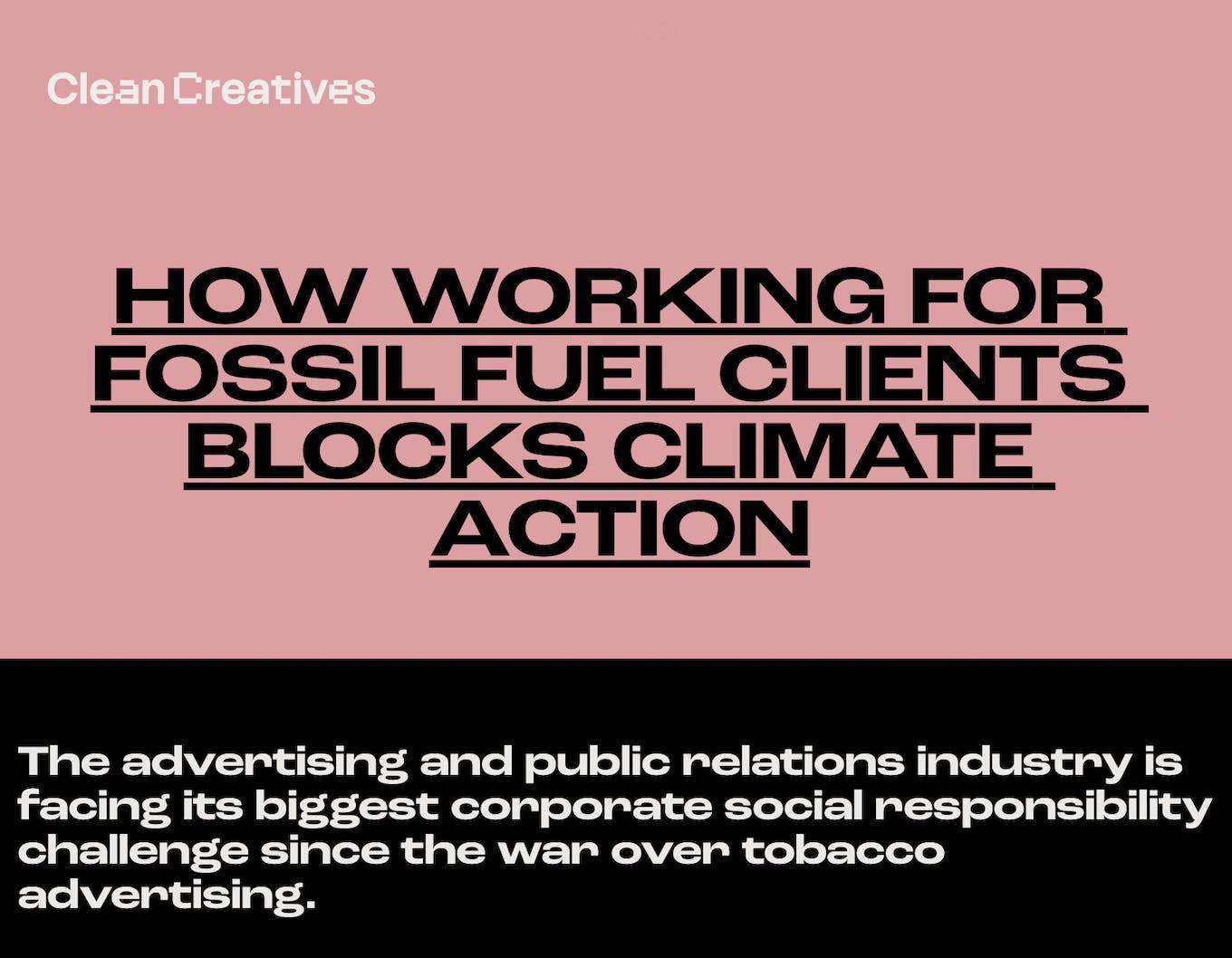 A report from Clean Creatives and Comms Declare highlighted how an Edelman report found that 60 per cent of employees would leave a company that is doing ‘fundamentally immoral’ work. Source: cleancreatives.org

Agencies usually only work on the small percentage of an oil and gas business that is “good”, so the publicity they create for their clients makes it seem like these brands are doing the right thing, Sudhaman added.

A study released earlier this month found that while 60 per cent of the communications of supermajors Chevron, ExxonMobil, Shell, TotalEnergies and BP are green claims, only 12 per cent of their investments are going on renewables.

Clean Creatives’ campaign will be effective if it can turn the heads of young PR professionals who have most to lose from climate change, Sudhaman said.

“This kind of campaign can help [to nudge PR firms away from fossil fuels] because it creates pressure from the bottom up,” he said.

“This is probably the most productive form of pressure,” he said.

The organisation’s most notable campaign to date has been highlighting the link between the world’s biggest PR firm, Edelman, and fossil fuels majors. Edelman stopped providing reputation management services for Standard Bank in August because of the South African’s lenders support for East African Crude Oil Pipeline.

Clean Creatives’ campaign breaks as a congressional hearing in the United States detailed leaked emails between fossil fuel majors and their agencies. Among the emails was an admission from ExxonMobil that its promoted renewable fuel made from algae is not viable at scale.