Bringing the power of the sun to every home

Yves Zuo is an example of a new breed of technology entrepreneurs who are out to change the world, one invention at a time.

Barely a year old, his solar start-up Pionovasion has already won at least a dozen corporate customers from across 12 countries for its unique solar cloth and thin-film solar cells, which can be shaped into all sorts of products because of their flexibility and adaptability.

Think airships, bicycles fitted with computers and GPS systems, and mobile chargers that get their energy from bendable thin-film solar cells, and you will get an idea of what Pionovasion is out to accomplish: to bring the power of the sun to everyone.

Just a year and a half ago (April 2014), Zuo was living it up in Paris, working for French utility giant GDF Suez after finishing his postgraduate degree in renewable energy and applied mathematics.

But he had a bigger vision.

“Living in France for several years, I was able to witness first-hand how environmental conservation and protection is part of everyday life for many Europeans, especially in the way they use solar energy widely,” Zuo says in a recent interview with Eco-Business. 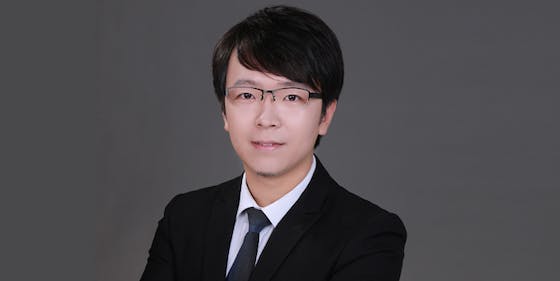 “And I thought: why can’t I do this in China, green the environment, and allow millions of families to experience the power of solar in their living rooms, classrooms, offices?”

Zuo decided that he wanted to bring that vision to reality, so he quit his job, and went to Nanjing city to set up his solar empire with his friend Zhang Guoqing. He chose Nanjing because he thought that the environment and talent available made it perfect for his company.

What is a solar cloth? 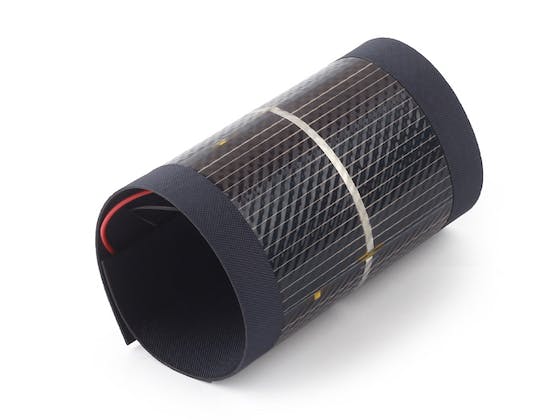 Armed with training and experience from the solar sector, both founders started building their business by focusing  on the latest cutting-edge technology - a type of thin-film solar cell called the copper indium gallium selenide (CIGS) solar cell.

It is made by depositing one or more thin layers of photovoltaic material on a substrate such as glass, plastic or metal. Its thickness varies from a few nanometres to tens of micrometres, so it is much thinner than its main rival, the first-generation crystalline silicon solar cell (c-Si).

Because the CIGS cells are so slim, flexible and lightweight, they can be used in a huge range of applications. The material also absorbs sunlight effectively, and so requires a much thinner film than other semiconductor materials. 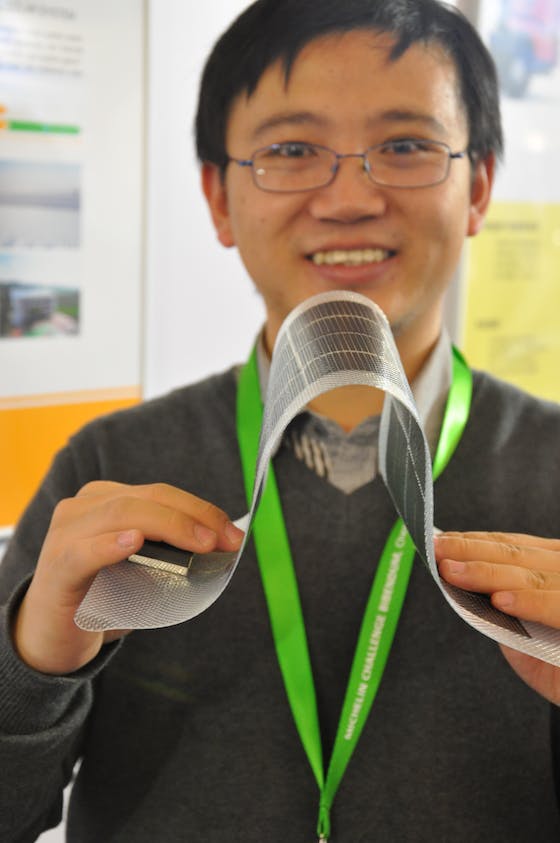 For example, the cells can be laminated on windows and other surfaces as semi-transparent, photovoltaic glazing material. They can also be used on a large scale, for instance, sandwiched between glass panes for the highest power efficiency.

A 28.8 megawatt plant in Brandenburg near Berlin – one of the largest solar plants in the world – for example, uses CIGS cells.

Using this thin-film technology, Pionovasion invented the solar cloth, which it launched in May this year. It is a flexible, bendable sheet of solar cells which  is excellent at gathering scattered light. It can be moulded into all sorts of shapes and sizes, depending on the needs of the customer.

“The uses are really up to the customers’ imagination,” Zuo says. For example, Pionovasion has fashioned the cells into umbrellas, solar chargers you can roll into a scroll, tents, camping backpacks, gloves, walls, roofs, and even sculptures.

To demonstrate just how versatile this material is, Pionovasion is working on several projects with partners both in and outside China. With Beijing University of Aeronautics and Astronautics, it has designed an airship powered entirely by the sun that can collect meteorological information or act as a surveillance drone.

It has also designed a small remote control solar car for students at the Shanghai American School. The idea is for the kids – aged 6 to 15 –to have a tool to learn about and apply the principles of solar energy. 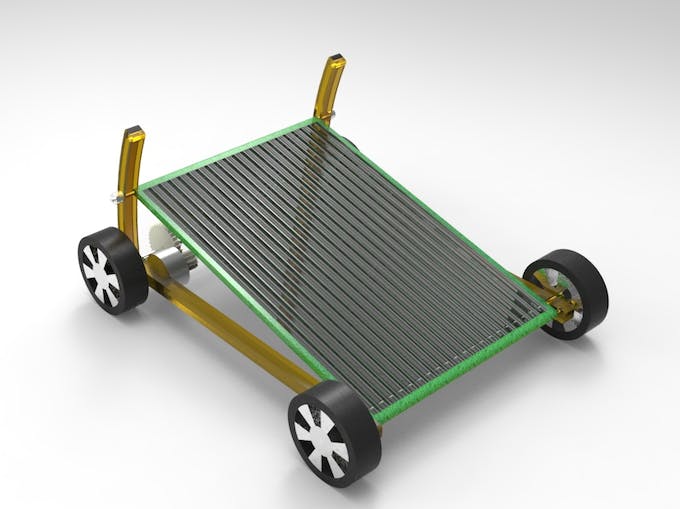 “The students can choose the sizes and voltages of the solar panels, adjust the angle at which the panels tilt, to control the speed of the vehicle,” Zuo explains. “By adjusting these variables, they can learn first-hand how solar energy works, what the best combination is under different lighting conditions.”

Pionovasion is also exporting its products overseas; it is working with bicycle-sharing scheme Social Bicycles in (SoBi) the United States to design and build a bike.  The idea is that the bike will be fitted with GPS, an Internet link, and a tiny computer – all run by solar power.

Social Bicycles is now operating in 10 cities in the US, two in Canada, and the company will be adding four more locations by the end of the year, according to its website.

The details are still under wraps, Zuo says. “But it’s an exciting project; So, watch this space.”

Design an indispensable part of innovation

Zuo says that to turn an idea from concept to reality, design is an indispensable component. For a product or idea to be useful, it cannot have merely advanced technology or a stunning design.

“You have to have both,” he says. “Our biggest challenge was how to turn this lifeless piece of material which means nothing to anyone into something that’s not only beautiful and useful but will blend seamlessly into people’s lives,” he says, referring to the thin film solar cells.

To help them achieve this, Pionovasion turned to Autodesk, an American software multinational whose 3D modelling software is the backbone of countless design and architecture workshops around the world. DreamWorks Animation, for instance, uses Autodeskto create its many hits including Madagascar: Escape 2 Africa and Monsters vs. Aliens. 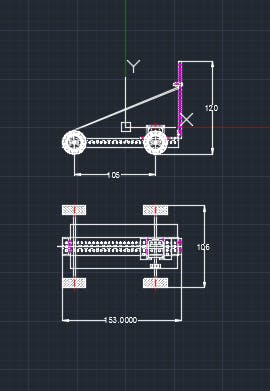 The design of the solar car. Image: Pionovasion

Autodesk, under its Cleantech Partner Program, provided a range of software – Inventor, 3ds Max and Fusion 360 – that allow Zuo and his team to turn their ideas into reality. Using these solutions, they were able to build models, try out different looks, surfaces and applications in the initial stages of design, and shorten the time needed to get prototypes to the market, Zuo says.

Following launches in Japan, Singapore, Australia and New Zealand, China is the fifth country in Asia Pacific to offer the program.

“We are pleased to offer a powerful suite of design tools to help innovative cleantech companies in China bring their solutions to market successfully,” says Lynelle Cameron, Senior Director of Sustainability at Autodesk and President and CEO of the Autodesk Foundation.

“Through our joint efforts, we look forward to supporting China’s sustainability efforts.”

CAD programs help the engineers explore design ideas, visualize concepts, and simulate how designs will perform in the real world - that is, turning designs from 2D to 3D - while 3ds Max software allows creators to see their designs in three-dimensional space and with animation.

3ds Max also allows designers to add texture to designs, experiment with different materials and see the creations in motion.

Fusion 360 is cloud-based software that centralises all the design information and data, and enables teams to collaborate online even when they are in different locations.

“With these software suites, we can easily experiment with and tweak designs to meet customers’ needs and imagine scenarios where the products can be used in different settings and under different conditions,” Zuo says.

Since using the software valued at US$150,000 in February, Pionovasion has designed more than 10 products with it and have been awarded four patents. From a start-up of just two employees – his partner and himself – Zuo says the company now has 12 staff and is talking to potential investors to raise its next round of funding.

“We’re speaking to potential investors now, and will use the funds to bring the company to the next level. I really want to broaden the appeal of solar-powered products and make solar energy usage more widespread,” he says.

As the company is still relatively small, Zuo says it is doing its own “small-scale” manufacturing at its facility in Nanjing. Going forward, it will look to outsourcing manufacturing elsewhere in China and focus on the technology, research and product development of the thin-film solar cells.

The current biggest motivation for him and his team, he says, is helping to slow down the deterioration of the natural environment. And this extends to creating awareness of cleaner sources of energy than coal, which still supplies as much as 65 per cent of China’s total power needs.

So, in line with its aim of driving the development of sustainable energy in China, the company has designed educational programs for school children and parents to engage them in sustainability activities.

Since the company started in 2014, it has involved communities in six successful solar projects, helping more than1,500 people and offsetting over 160 tonnes of annual carbon emissions.

A recent project was the installation of a solar energy station at Wang Bao Primary School, which is located in a remote area in Tangshan Mountains, Hebei Province. Due to its isolation, the school has very unreliable access to electricity. So while it has equipment such as computers, lights and a water purifier – all of which were donated – the school is unable to run them. 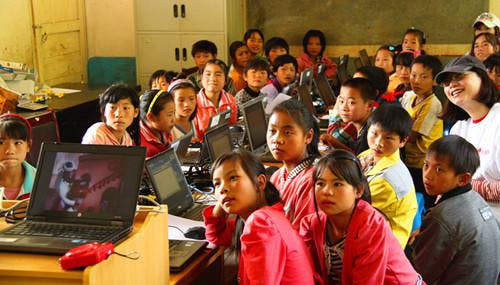 Pionovasion installed a 10kW station on the roof of the main teaching building that provided up to 90 per cent of the school’s electricity needs. It also taught the 80 kids in the school as well as the wider community about sustainable energy.

The solution has had positive impact, Zuo says. “Reliable and clean energy is powering computers and classrooms. The school saves money on electricity bills – 13,900 renminbi (US$2,180) a year that it can devote to extracurricular activities for the students; and the whole community benefits from reduced CO2 emissions.”

By converting to solar power, the school can reduce about 13.7 tonnes of carbon dioxide annually, he adds.

As the project affects the entire community, it is crucial for the company to get permission and participation from everyone, Zuo says.

“From the beginning of the process, we talk with teachers, parents, and local groups to ensure the right needs are being addressed,” he explains. And that is the driving force behind the company’s work, he adds.

“We want to help bring solar power to every home, and harness the power of the sun to make life more liveable, more convenient, and greener: that’s why we do what we do.”

Pionovasion is part of the Autodesk Cleantech Partner Program. The program supports clean technology innovators who are developing innovative solutions to solve the world’s environmental challenges. As part of the program, eligible companies receive world-class software to design, visualise, and simulate their ideas and accelerate their time to market through 3D Digital Prototyping. To apply for or learn more, visit www.autodesk.com.cn/cleantech