Nutritious, resource-efficient, and widely available: Insects may not be everyone’s cup of tea, but could they help feed the planet’s growing population? Hong Kong-based startup Livin Farms offers home cooks a clean, easy way to get a jump-start on embracing the food of the future.

Austrian industrial designer Katharina Unger’s daily diet includes a not-so-secret ingredient that contains as much protein as beef, more fibre than broccoli and more vitamin B12 than eggs, but is much more sustainable than these conventional foods.

“I eat mealworms almost every day,” she says in a recent interview. “In my morning granola, sprinkled onto salad, or cooked into meatballs and served with tomato sauce.”

“They taste good, have a crispy texture, and a slightly nutty flavour,” continues Unger, who in addition to being a mealworm aficionado is the creator of Livin Farms, the world’s first desktop farm for edible insects.

Founded last year by Unger and fellow Austrian designer Julia Kaisinger, the Hong Kong-based enterprise aims to provide a clean and convenient way for people to explore insect eating, which is a standard practice in many cultures but regarded as unusual, or even disgusting in others. This is driven by a belief that insects will play a game-changing role in feeding a growing global population while easing pressure on scarce land and water resources and minimising carbon emissions.

Agriculture, along with forestry and land clearing, is the world’s second largest source of greenhouse gases today, after electricity production. It accounts for about a fifth of global emissions.

The United Nations’ Food and Agriculture Organisation (FAO) estimates that nearly two-thirds of these agricultural emissions are due to livestock, a result of animal digestion, manure and feed production.

And as the world population approaches the 10 billion mark in 2050, FAO estimates that agricultural production must rise by 60 per cent, a requirement that threatens to kick-start a vicious cycle of rising emissions, crop failures, and global hunger.

“There are a few things that are going to fix the climate issue and food system, and insects will be one of them,” says Unger.

Bugs such as mealworms, termites, grasshoppers, crickets, fly larvae and silkworms are already part of diets in some Asian, South American and African countries. But in the rest of the world, insects are regarded at best, as a novelty food or at worst, completely inedible.

However, their benefits are indisputable. FAO says that not only do many species have protein, amino acid, iron, and vitamin levels comparable to beef, a comparison of greenhouse gas emissions, land and energy use between mealworms and other foods shows that “mealworms are a more environmentally friendly source of animal protein than milk, chicken, pork and beef”.

I eat mealworms almost every day. In my morning granola, sprinkled onto salad, or cooked into meatballs and served with tomato sauce.

Quieter than crickets and easier to control than flies, mealworms are at the heart of Livin Farms’s core product, called The Hive.

The device was first unveiled on crowdfunding website Kickstarter last year, when Livin Farms launched a campaign to gather support for its production. To date, the firm has has raised more than US$145,000 with almost 1,000 customers today. Customers not ready to make the US$650 investment in a Hive can also order a bottle of mealworms to try.

The machine looks like a set of vertically stacked drawers and fits neatly onto the average kitchen counter, and aims to scale up the benefits of edible insect while empowering urban dwellers to grow their own food at home, says Unger.

Customers can start growing mealworms using the starter pack of pupae that comes with each kit. These turn into beetles, which then lay eggs that produce the worms. Users can feed the mealworms kitchen scraps such as fruit and vegetable, and when they are ready to eat them, they simply push a button.

This activates a patent-pending harvest process, where a combination of vibration and temperature control encourage the mealworms to crawl out of their drawers and into the harvesting tray. Livin Farms says that the depending on the worms’ diet, users can get between 100g and 250g of mealworms a week. 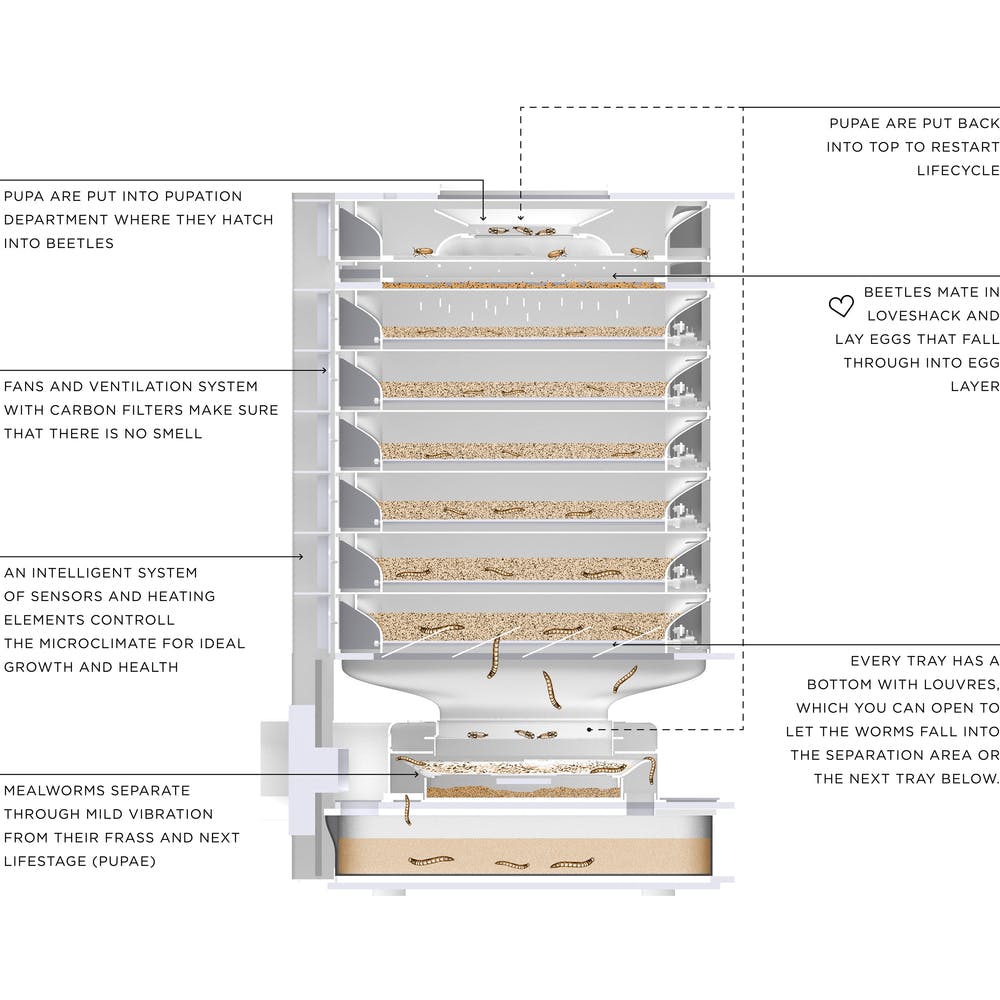 The system’s appeal lies in the fact that it is hygienic and low-maintenance, says Unger. Allowing people to see what is happening at every stage of the process also gives them a sense of independence and ownership over where their food comes from.

However, designing such a seamless and intuitive product was not an easy process, says Unger.

“Our system is about working with biology, and stimulating the insects to do the things we want and separating them easily in the harvest process,” she explains.

Every element of the Hive had to be designed with worm behaviour in mind. For example, areas where the worms were required to climb out of a plate required rougher materials and just the right incline level, while the bits that required them to slide into the harvest area required a smoother touch.

“Getting all of this into one product and manufacturing process was challenging,” shares Unger.

To get the initial design right, Unger and Kaisinger relied heavily on tools provided by American software giant Autodesk through the Autodesk Entrepreneur Impact Programme. This initiative supports early-stage start-ups and entrepreneurs who are designing hardware solutions in the social, cleantech and environmental sectors. It grants them Autodesk software worth up to US$150,000 to design, visualise, and simulate their ideas and accelerate their time to market.

Autodesk, which makes a range of 3D design software, invited Livin Farms to participate in its Entrepreneur Impact Programme in late 2014, when it was preparing to launch its Kickstarter bid.

“We used Autodesk Fusion 360 to do up the initial designs,” shares Unger. “It is very convenient because it allows us to share drawings through the cloud and collaborate on designs even if we are in different parts of the world.”

This has become an increasingly frequent occurrence as Unger travels to ink new partnerships with supporters and to give talks about the benefits of eating insects.

As the Hive enters production, new design challenges occur. Every tweak to the design to make it easier, cheaper, and more sustainable to manufacture requires fresh rounds of testing.

To speed up the process and make the designs as precise as possible, Livin Farms is using Autodesk Inventor software, which specialises in mechanical design, says Unger. The company is now on track to ship the first Hives by the middle of next year.

Food of the future

Currently, most of the Hive’s customers live in the United States or Europe, but the product is gaining popularity in Asia too, shares Unger.

The fact that the practice of eating insects is already entrenched in several Asian cultures makes it a promising market. And as the region urbanises and grows more densely populated, being able to grow a protein-rich, hygienic source of food at home will be no doubt help address food security, she notes.

And where traditional insect-gathering practices may be threatened by the fact that an increasingly polluted natural environment means that wild-caught insects may not be safe to eat, the Hive allows the same process to be carried out in clean and safe ways, she adds. 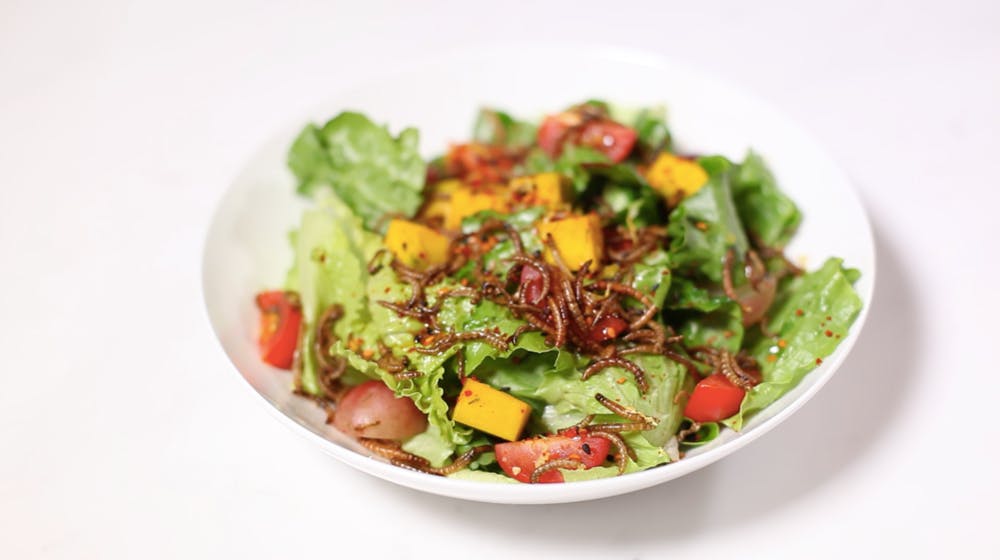 Unger is aware that scaling up the technology’s adoption from the current 1,000 customers to a wider global scale will not be easy, but remains undaunted.

Foods that are mainstream today, such as lobsters and sushi, also had a long road to the supermarket shelves, she explains. These dishes only gained acceptance through efforts by restaurateurs to create a positive experience around the foods.

There was a “ceremonial and experiential” element to how the foods were introduced to diners and served, which was crucial in getting people to accept it as a valid food option, notes Unger.

“The same thing is happening around the world with edible insects,” says Unger. “The Hive also strives to provide the same step-by-step experience to users.”

“We will continue to develop a brand that stands for sustainability and transparency, and lead the way towards the global edible insect movement,” she adds.

Livin Farms is part of the Autodesk Entrepreneur Impact Programme, which supports early-stage start-ups and entrepreneurs in the social, cleantech and environmental sectors.

As part of the programme, eligible companies receive world-class software to design, visualise and simulate their ideas and accelerate their time to market through 3D Digital Prototyping. To apply for or learn more, visit www.autodesk.com/entrepreneurimpact and follow @AutodeskImpact.

Tapping the sun for safer healthcare

A new device that can sterilise surgical instruments using just sunlight and water could help to prevent infections and save lives in rural areas and disaster-struck zones.
Tapping the sun for safer healthcare

There's something fishy about this skateboard

From fishy to funky - here's how Chilean company Bureo recycles unwanted fishing nets into skateboards and sunglasses.
There's something fishy about this skateboard

A light of hope for China's rural children

One company’s mission to turn China’s waste into energy

Even as China continues to enjoy rapid economic growth, it faces a growing organic waste problem that is polluting its rivers and cramming its landfills. One company, Shanghai Tongji Plant Biomass Energy, is on a mission to convert this waste into clean energy across the country.
One company’s mission to turn China’s waste into energy