The textile industry of Patwa Toli is polluting rivers and groundwater in the Indian state of Bihar, but businesses have failed to clean up their act claiming they provide essential jobs.

The weavers of Patwa Toli in the Gaya district of Bihar manufacture two things in bulk: colourful textiles and engineers. While the former is their ancestral trade, the latter is apparently a product of recession.

From a distance Patwa Toli is a riot of colours. Threads of highly toxic red, green and yellow water seeps through the sandy banks slowly weaving itself into the clear waters of the Falgu River, a tributary of the Ganga.

Decades of effluents from dyeing, washing and pressing units have seeped deep into the groundwater of Patwa Toli and the Falgu River. The pollution has become so severe in the last two years that hand pumps in the village started dispensing multi-coloured water which gave off a strong stench, according to a report prepared by Sridhar Updhayay in June 2016, a medical officer of Gaya’s public health department.

The report, which declared the groundwater of Patwa Toli “unfit for human consumption”, was sent to the civil surgeon (a senior doctor, not necessarily a surgeon, appointed by government in a district) for further action. The civil surgeon advised locals to stop drinking water from hand pumps and asked the district administration to bore deeper wells to access clean water. But the work hasn’t started yet.

The poor suffer the most here as they have to drink this severely contaminated water.

The marginalised suffer the most

The severe pollution has affected the lives of many local people. Shehnaz Praveen, a housewife, confronts every government official visiting the locality to inspect the pollution that is forcing her to walk for an hour further to fetch drinking water.  “I have to wake up an hour earlier to walk and bring one bucket of fresh water from a nearby locality. Even a glass of this hand pump water makes me and my children sick,” she says. 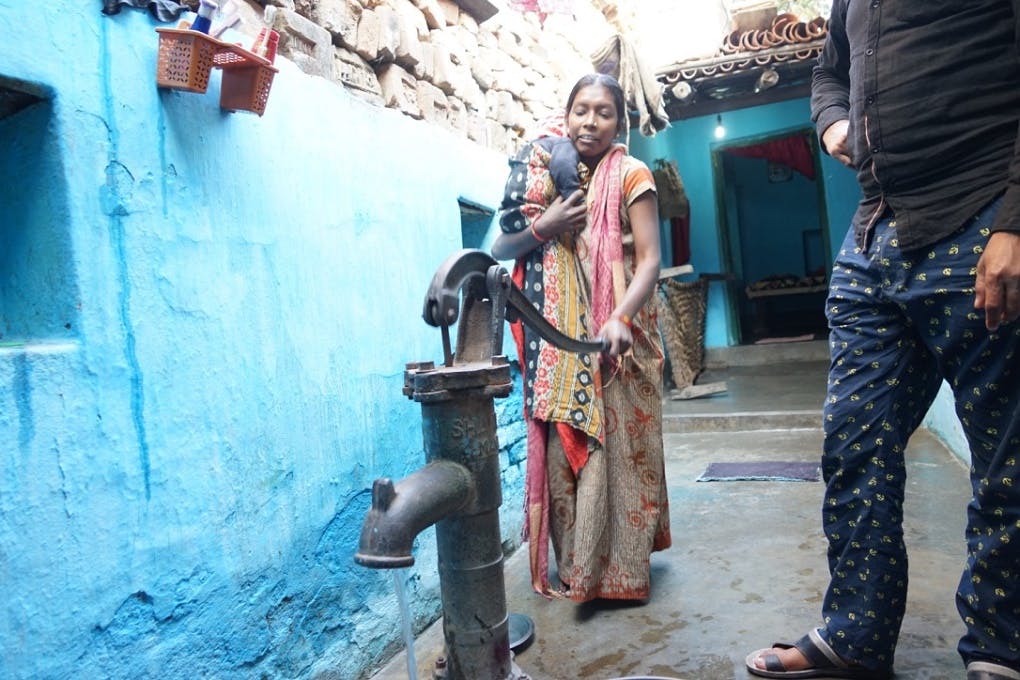 For Shehnaz Praveen, the polluted water is very difficult to avoid. Image: Alok Gupta via The Third Pole

Those who cannot spend an extra hour to fetch fresh water often end up at the clinic of Md Shafeeq. The doctor refuses to answer questions about his medical qualifications, but his surgery is crowed with people since he only charges INR 20 per patient (USD 0.30). “Almost everyone in the locality is a victim of water pollution. A majority of people suffer from liver and kidney diseases,” he says.

Wealthy power loom owners avoid these health problems by using water purifiers or buying bottled water, Shafeeq claims. “The poor suffer the most here as they have to drink this severely contaminated water,” he says.

Kaushalendra Narayan, district president of the Swabhiman party, a political party leading the protest against pollution, says that there are nearly 12,000 Muslims living in Pehani, the locality of Patwa Toli. They mostly live in poverty and are the major victims of underground water pollution.

“Hand pumps are the only source of potable water for these families. They do not have financial capacity to buy water or water purifiers,” Narayan claims. Groundwater pollution has not spared the mosque where tap water has turned yellow with a strong stench.

The Swabhiman party sent the medical report to Bihar State Pollution Control Board (BSPCB) demanding they take action. S Chandrasekar, member secretary of the Board told thethirdpole.net that chemicals from the dyeing and bleaching units of Patwa Toli are extremely dangerous.

“We fear that such unscientific disposal of effluent from dyeing unit might cause irreversible damage to Falgu River and also groundwater of Patwa Toli.”

In response to intensifying protests and massive pollution, the BSPCB directed the Gaya district administration to immediately close all unregistered dyeing and polluting units on June 15 last year. 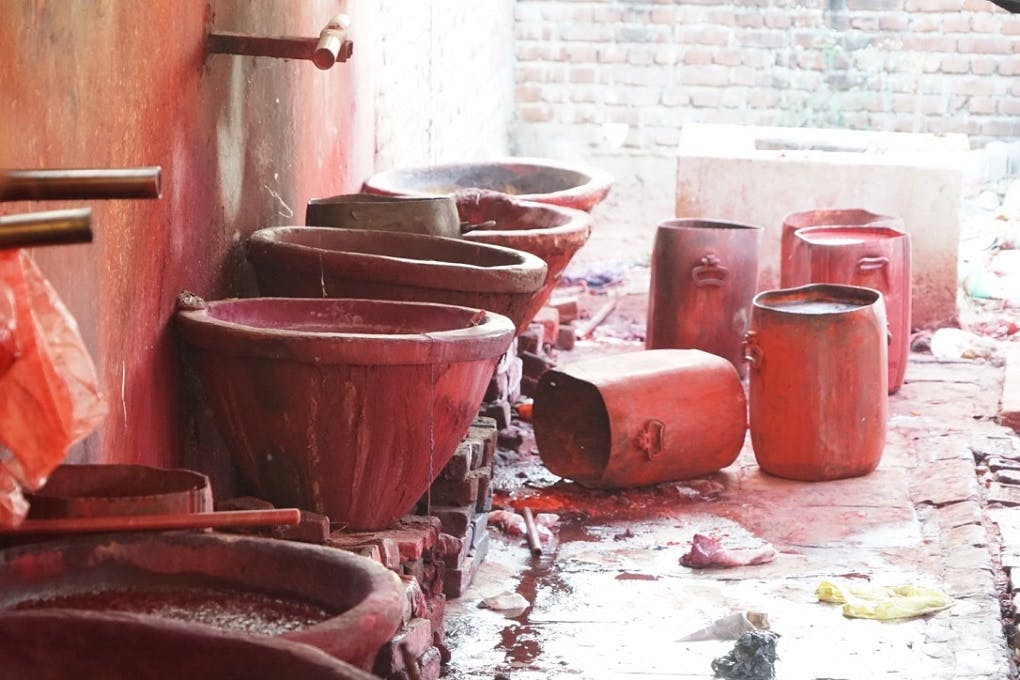 Shutting down dyeing plants has led to mass unemployment. Image: Alok Gupta via The Third Pole

With barely 100 registered power looms in Patwatoli, around 12,000 units came to a standstill, leaving nearly 60,000 people out of work. “We have seen many threads of life including recession, struggle and prosperity but we have got through them.

But this time, it’s difficult,” says Gopal Patwa, president of the Bihar Bunkar Kalyan Sangh, an association of weavers. He claims the district administration and pollution board are indulging in coercive measures instead of providing a real solution.

Power loom owners say the industry it is one of the major employment providers in an industry-starved Bihar. Finished textile products from Patwa Toli are sent all over the country with an annual turnover of more than INR 50 million (USD 750,000).

Gopal Patwa says looms owners have been operating in the area for nearly five decades “and no one complained or asked us to treat our wastewater. One fine day, we are asked to close down but we’ve not been taught how to clean our wastewater,” he rues.

Chandrasekar accepts that closing the power loom units is not a practical solution. It caused panic among banks that have given huge loans to power loom owners.

“Closing the looms will lead to starvation like situation for many families as they would lose their livelihoods.” Other textile hubs like Tirupur in Tamil Nadu resolved the pollution issue by investing money in zero discharge technology working through community and government partnerships.

Rather than adopt innovative measure to control pollution, the BSPCB, district administration and industry department, have resorted to an expensive and time consuming solution: to shift 12,000 units to a new industrial area.

Patwa Toli is also known for having a high number of students graduating from Indian Institutes of Technologies (IITs) – among the most prestigious educational institutions in India.

In 1990s when recession hit the handloom sector, children in Patwa Toli studied hard in the deafening noise of looms and poverty to crack the country’s toughest engineering exam- the Indian Institute of Technology-Joint Entrance Exam (IIT-JEE).

There are now over 200 IIT graduates from Patwa Toli, but they, and scores of technocrats in the area, have also failed to resolve the pollution problem.

Keshar Prasad an engineer who graduated from IIT-Kharagpur in 2008 belongs to the family that has produced seven IIT graduates. Keshar is presently employed at Eco Lab in Pune. He argues that improving Patwa Toli’s drainage system to control the pollution would be cheaper than shifting the power looms. 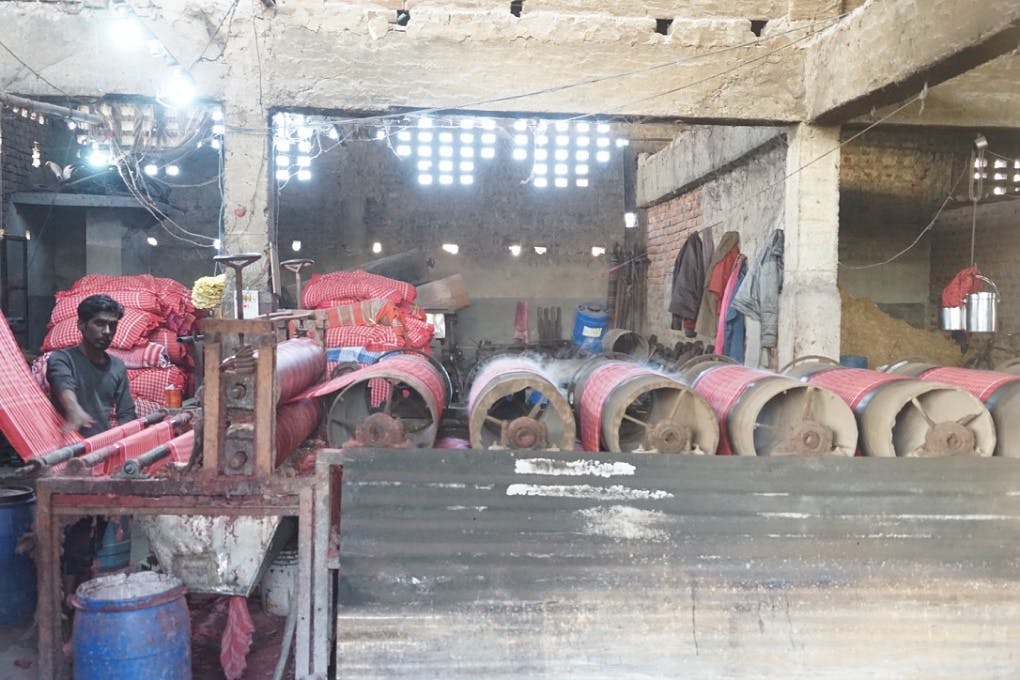 Innovative ways could help save the jobs as well as treat the wastewater, but they have not been adopted. Image: Alok Gupta via The Third Pole

“Both industrial and residential waste flows from the same drain. It would be easy to collect and recycle the dye wastewater if the industrial drainage had a separate outlet,” he says. Keshar’s solution would save millions of rupees.

Krishna Prasad, a graduate of Cochin University proposes a comprehensive pollution plan for Patwa Toli. “Let’s run looms on solar energy, plant trees and chemicals from dyes can be re-used,” he says.

Meanwhile, the power looms are back in business, further polluting the groundwater and Falgu River.  Residents, after staging over a dozen protest including demonstrations, road blockades and sit-ins over the last eight months, have now turned to the courts for help.

“We have hired an advocate to seek justice. We are also planning to approach the National Green Tribunal,” Narayan from the Swabhiman party says.