Most Asian countries’ NDC commitments are not sufficiently aligned with the Paris Agreement target to limit global temperature rise to 1.5°C, a study by Fair Finance Asia finds.

Countries in the world’s largest carbon-emitting region are not investing nearly enough in renewable energy to meet global targets for avoiding dangerous planetary heating, according to a new study by Fair Finance Asia, a network of over 90 Asian allied civil society organisations (CSOs) committed to ensuring financial institutions’ funding decisions respect the social and environmental well-being of local communities.

The 13-country study found that Asia is experiencing an ‘energy addition’ rather than an energy ‘transition’ due to the slow uptake of climate and energy policies adopted by Asian policy makers, financial regulators, as well as banks, and investors.

The report said that the region’s clean energy investments were not aggressive enough to meet the 1.5°C cap on global warming set out by the Paris Agreement, and many are falling short of the renewables outlay needed to meet targets for achieving the climate-critical 2050 net-zero emissions goal.

The report, Financing the Just Transition: Powering Asia’s Sustainable Energy Future, was authored by FFA in collaboration with the Stockholm Environment Institute (SEI) alongside research partners, Profundo and Strategia Development Research Institute. It was launched on Dec 6 at the “Rethinking Asia’s Energy Transition: Alternative Strategies from the Grassroots” panel discussion at FFA’s General Assembly in Bangkok.

The paper’s analysis of investments by Asian banks and investors showed that financing is still predominantly directed towards fossil fuels. Renewable energy accounts for only 14 per cent of Asian banks’ energy financing during the past six years on average. Of all the outstanding energy investments by Asian investors as of September 2022, only 21 per cent supported renewable energy.

Given the shortcomings of the energy and financial sector policies of all the countries in the study, the coming years will see renewable energy additions across Asia (in different volumes per country), but not an energy transition.

“The conclusions from our new report confirm that no meaningful shift in energy financing and investments across Asia is contributing to neither a just nor any actual transition since the Paris Agreement,” said Bernadette Victorio, programme lead of FFA.

“FFA calls on the Asian financial sector and leaders to develop and urgently implement policies that facilitate a real shift from fossil fuels to renewables, while ensuring that the rights and well-being of the most vulnerable communities are safeguarded.”

To address these issues and challenges, during report’s launch, there was a panel session to discuss the region’s strategies for the retirement of non-renewable energy sources, and to explore inclusive grassroots solutions, such as collaborations with civil society groups to engage local communities to play a proactive role, that pave the way for a more just energy transition.

A key obstacle for Asia’s energy transition is energy subsidies. In 2020, G20 countries provided almost US$20 billion in fossil fuel subsidies, with Indonesia and China among the biggest supporters of dirty energy. According to FFA’s report, Indonesia could unlock US$6 billion for renewable energy funding if it scrapped fossil fuel subsidies.

Another barrier is the region’s vast fleet of coal-fired power stations and coal mines, which need to be retired early. According to one China-based expert interviewed for the report: “The biggest issue we need to be discussing is phasing out coal, not phasing in renewables. We have seen a lot of movement in renewables in China, but not nearly enough on coal.”

The Asian Development Bank is working on an investment scheme to retire coal plants in Vietnam, Indonesia and the Philippines. At the G20 Summit in Bali, G7 countries including Germany, United States, Japan and Norway announced a plan to raise US$20 billion to help Indonesia shut down coal-fired power plants early and crowd in clean energy alternatives.

According to the report, Asian investors had energy sector shares and bonds in their portfolios worth a total of US$245.6 billion. The figure was generated from an analysis of the ownership of shares and bonds issued by 168 global and Asian energy companies, including major corporations active in the coal, oil and gas and renewable energy supply chains.

Of these investments, 79 per cent (US$194.3 billion) was used to finance fossil fuel activities, while 21 per cent went to renewable energy activities (US$51.2 billion). 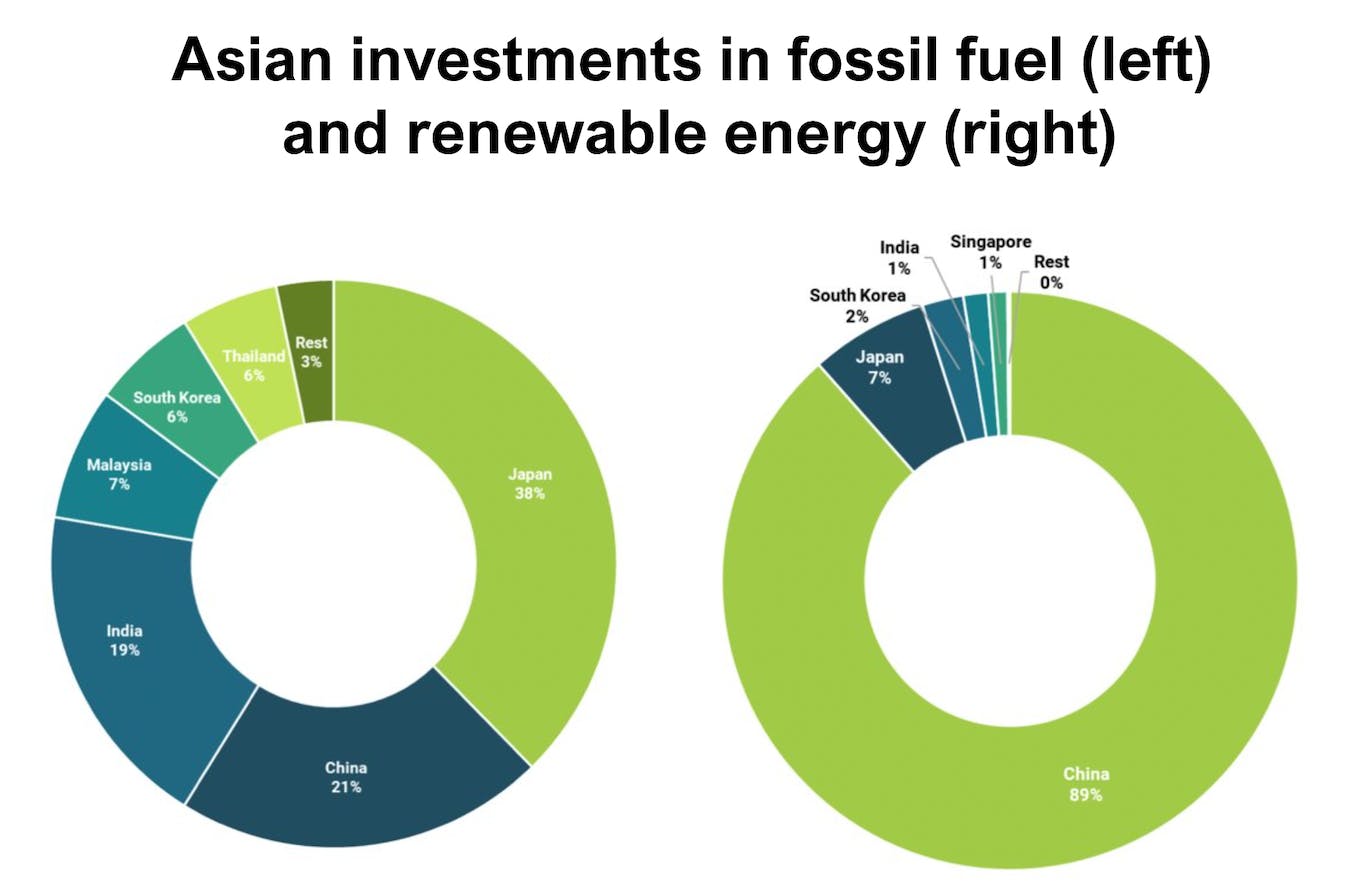 Asian investments in fossil fuels (left) and renewable energy (right) by country of origin from 2016 to 2022. Source: Fair Finance Asia

Since the Paris Agreement, all of Asia’s banks have financed more fossil fuel projects than renewables. A 2021 study by FFA found that there was growing investment in Asia’s coal sector post-2015, with the region’s banks playing a key role in supporting fossil fuel growth.

Chinese and Japanese banks have been the biggest post-Paris financiers of renewables, with Industrial and Commercial Bank of China being the region’s biggest clean energy backer.

Outside of China and Japan, Korea’s KB Financial Group and the Philippines’ BDO Unibank have been the biggest renewables financiers. 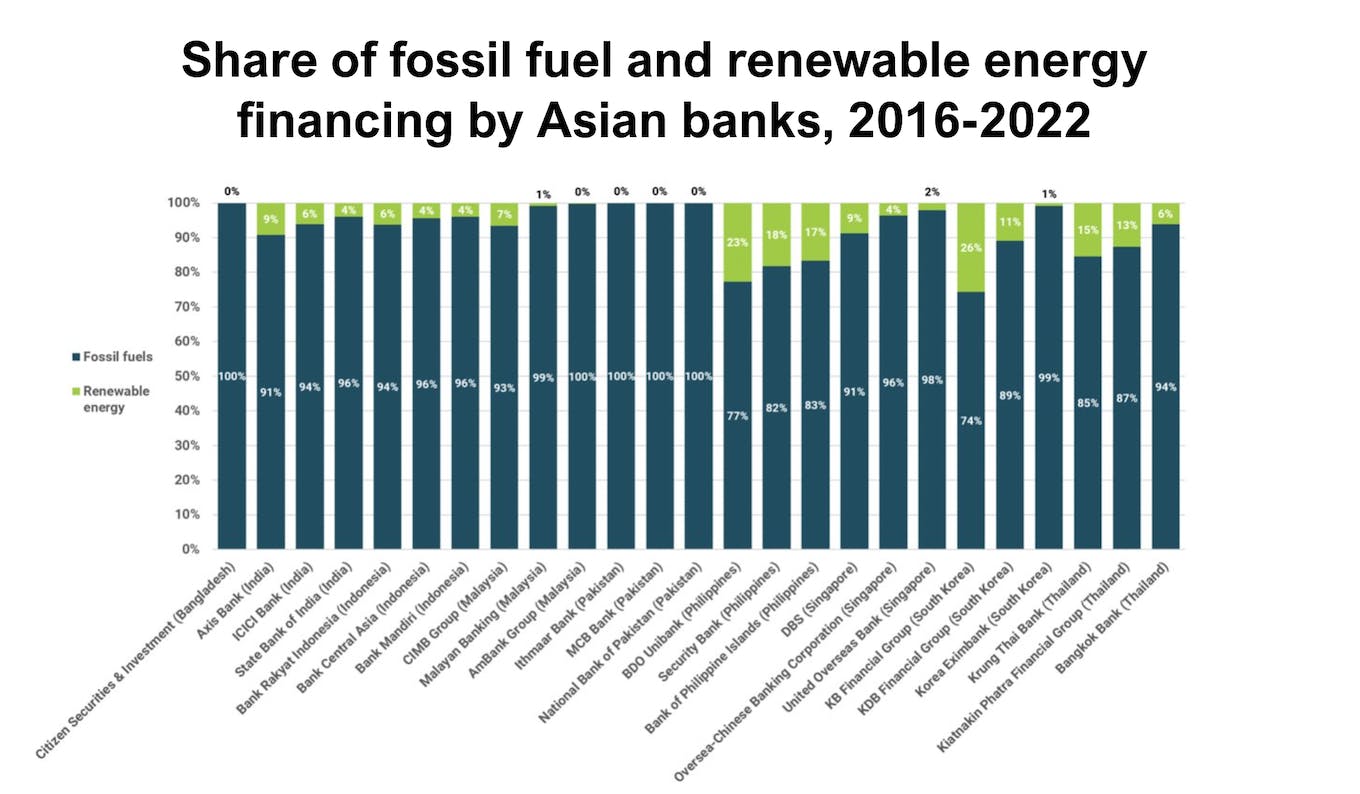 Planning for a just transition

Not only is investment in renewables lagging in Asia, but climate policies could leave vulnerable communities and workers exposed by the energy transition, particularly in coal-dependent countries like Indonesia, South Korea and India, the report finds.

Speaking at the FFA’s fireside chat alongside the G20 Leaders’ Summit in Bali, Emma Sri Martini, chief financial officer of Pertamina, Indonesia’s state oil company, noted that the energy transition needs to be “customised” to ensure energy is accessible, reliable and affordable as the system transitions from fossil fuel.

“If we suddenly switched to green energy, suddenly people wouldn’t be able to access energy,” she said. “The transition has to be affordable for all. It’s not a dream – the energy transition needs to be grounded in reality.”

Indonesia employs 1.69 million people in mining and quarrying, 14 per cent of them in the coal sector. However, FFA’s reports highlights that no concrete plan has been generated to support workers, despite lobbying from trade unions.

In South Korea, a spike in job losses is expected after 2030, the deadline for shutting down manufacturing combustion engine vehicles. The government, as part of the ‘K-New Deal’ launched in 2020, is spending US$3.9 billion to create 659,000 green jobs for displaced workers. However, green jobs in South Korea are currently not attractive to workers due to the short-term nature of contracts and it is also not clear how workers will be reskilled and supported in the transition, the report finds.

“Without an inclusive, equitable and just action plan to support people in the region where fossil fuels will be phased out, ensuring all the opportunity to earn a living, a fossil fuel phase-out will fail,” said Niall O’Connor, Asia director for the research and policy organisation, the Stockholm Environment Institute. “It is also critical we ensure the parallel phase-in of renewables in a like-minded and just approach, ensuring gender quality and social equity in such a green transition. In this way, we all win.”

The story of the Cirebon 1 coal power project is symptomatic of the obstacles in Indonesia’s coal phase-out plan. As the first pilot for the Asian Development Bank (ADB)’s Energy Transition Mechanism (ETM), Cirebon 1 may be decommissioned 10 to 15 years earlier than planned, but its environmental and social impacts remain unaddressed, while a new plant is being built nearby.
Indonesia's Cirebon 1 coal power project highlights gaps in ADB's 'coal-to-clean' ETM scheme

The journey from fossil fuel dependence to renewable energy sources for Asian countries is fraught with complications for those who work in and live around energy-related industries, and requires a massive amount of financial capital.
Financing the just transition: Powering Asia's sustainable energy future

Research finds that financial institutions in the region are largely silent on conflicts over land rights. Most do not consider, in their lending and investment practices, whether women farm workers are treated unequally or if general labour conditions are fair.
Push for Asean to tighten human rights due diligence for cross-border financing of agribusiness

Financial institutions are underestimating the risk of turning a blind-eye to poor social practices in their agri-investments. Left unchecked, they may bear the brunt of loan defaults and a tarnished reputation.
Asian banks are failing women in agribusiness: study