Asia’s meat, fish and dairy suppliers: Who are the sustainability leaders and laggards?

Many of the continent’s animal protein producers lack disclosure and commitments on deforestation, emissions, animal welfare standards and use of antibiotics, according to a new report.

Asia’s rising middle class is fueling a voracious appetite for animal protein, but many of its meat, fish and dairy suppliers are failing to manage impacts such as emissions, deforestation and water use.

Despite Asian companies making up nearly half, or 28, of the world’s 60 largest publicly listed animal protein producers, they are lagging when it comes to disclosure and commitments on deforestation and biodiversity loss, greenhouse gas emissions, animal welfare standards and use of antibiotics.

These were some key findings of the Coller FAIRR Protein Producer Index 2019, which on Tuesday issued its summary on Asian companies, which have a combined market capitalisation of nearly US$190 billion and supply 19 per cent of the Asian protein market. 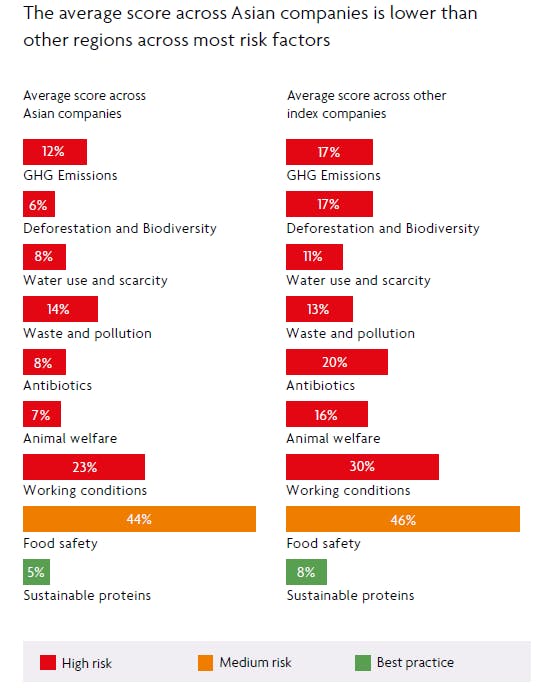 The index aims to support investors making decisions on the protein sector, and serve as a tool to help food companies work with their suppliers to minimise reputational and operational risks. It is developed by the FAIRR Initiative, a collaborative investor network established by the philanthropic foundation of British private equity entrepreneur Jeremy Coller. FAIRR stands for Farm Animal Investment Risk and Return Initiative.

Seventy billion animals are processed each year to feed humans, and the US$1.5 trillion livestock farming industry accounts for 14 per cent of total greenhouse gas emissions, Coller said in the report’s foreword. Farmed animals consume 73 per cent of all antibiotics used in the world; in many instances, in healthy animals to help them grow faster.

The lack of scrutiny of the sector has meant that these companies (breeding, growing and processing livestock and fish) have been allowed to scale their operations, markets and production volumes without clear controls.

Thai conglomerate Charoen Pokphand Foods (10th), China Mengniu Dairy (13th), Chinese pork producer WH Group (18th) and aquaculture firm Thai Union Group (20th) were ranked among the top 20 on the index. They were assessed to be medium-risk—that is, with basic performance targets set and some disclosure of their performance metrics. Topping the index was Norwegian seafood giant Mowi, which was found to be “low-risk”.

Other nuggets from the report

Charoen Pokphand was the only Asian company on the index that addressed deforestation risks linked to its sourcing of soy for animal feed. It has pledged that the soy it uses will be net-zero deforestation by 2020.

Charoen Pokphand and Thai Union had the best scores on human rights reporting, and the latter is among the aquaculture companies that disclose the components of feed by percentage (the proportion of marine products used in fish feed is linked to its environmental impact), the report said.

China Mengniu Dairy has a dedicated plant-based protein beverage business, while WH Group is the only company that disclosed its product recalls and corrective actions.

Two Singapore-listed firms, pork producer QAF (46th) and multi-protein company Japfa (44th), also ranked lowly. They were among the 24 Asian companies that were deemed “high-risk”—that is, with no or limited disclosure and commitments on eight risk factors including water pollution and food safety.

The rapid growth of the meat sector in many Asian countries has led to more available cheap protein sources, the report noted. “However, these benefits have come at a steep cost: the sector is one of the primary drivers of the most serious environmental and social risks facing our planet and society,” it said.

“The lack of scrutiny on the sector has meant that these companies (breeding, growing and processing livestock and fish) have been allowed to scale their operations, markets and production volumes without clear controls,” it added. “This creates systemic risks: not just for companies, but also their global food customers, investors, consumers and society at large.”

China, the world’s most populous country, is now the single biggest market for meat consumption and the report highlighted how it is driving deforestation on the other side of the world in Brazil.

China and Hong Kong account for about 38 per cent of demand for Brazilian beef. Some 80 per cent of Amazon forests cleared since 2014 have been occupied by cattle, the report noted.

Brazil is also a major supplier of soy to Asia, most of which goes towards feeding pigs and other livestock. Soy-related deforestation has been significant in southern Brazil, the report noted.

The escalation of the United States-China trade war has also worsened deforestation, as the decrease in China’s soy imports from the US has been replaced by imports from Brazil.

The current outbreak of African Swine Fever—described as the largest-ever animal disease outbreak—has also dented profits of pork producers, showing that sustainability affects the bottomline. China’s WH Group, the world’s largest pork producer, saw a 31.6 per cent drop in operating profits in its fresh pork division in the first six months of this year as a result of the outbreak, the report said.

“Asian agricultural companies must do more to manage their environmental and social footprint if they are to maintain their license to operate in tomorrow’s world,” said Rebecca Lewis, managing partner of investment management company Arisaig Partners, which is part of FAIRR.

While Asia’s food companies have room for improvement when it comes to disclosure and commitment, their focus is shifting from purely increasing yield to sustainable production, said Dawn Neo, senior manager for corporate engagement at Global Food Partners, a consultancy that works with such businesses in Asia to set realistic targets for improvement.

In terms of animal welfare, some forward-thinking producers have made commitments to improve on-farm practices, she said. “Building capacity across the value chain, from producers to regulators, is crucial for sustainability. Fortunately, we have seen interest from governments, corporations and farmers to identify and bridge the capacity gaps,” Neo added.