Covid-19 and the continued regression on climate action and resource use have caused the biggest slowdown in pace since the targets were set in 2015. Southeast Asia and the Pacific are particularly lagging.

A better future is now further out of reach for over half the world’s population that lives in the Asia Pacific region, according to a United Nations (UN) report.

It’s the biggest documented slide since a set of 17 global Sustainable Development Goals were established in 2015, as part of global efforts to eradicate poverty, protect the environment and promote economic growth. 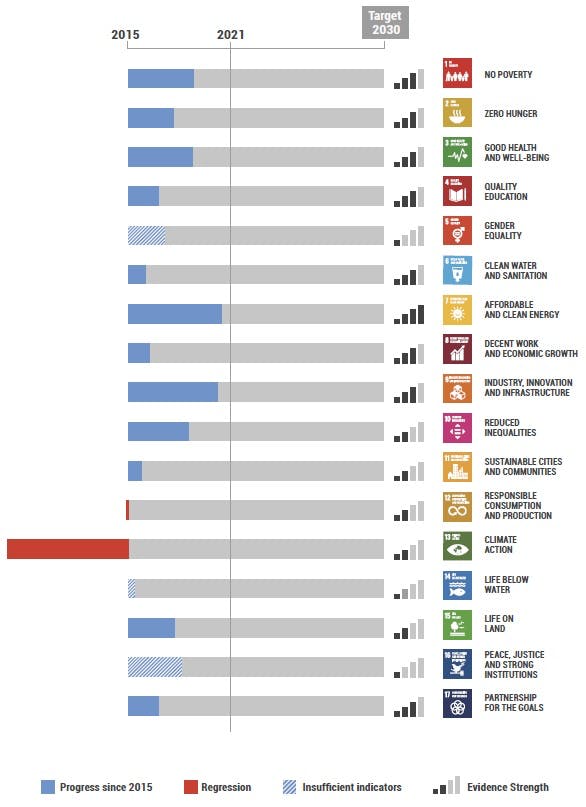 Snapshot of SDG progress in Asia and the Pacific. The vertical line for 2021 shows the progress needed on each goal to meet 2030 targets; none are on track. Image: UN ESCAP. [click to expand]

Indicators on climate action continue to regress. Despite the region having better disaster management strategies, records show that nearly 36,000 people died or went missing from disasters in 2020 – the highest since 2015. Greenhouse gas emissions rose 0.6 per cent between 2015 and 2018.

According to data by the UN Economic and Social Commission for Asia and the Pacific, there has never been progress on climate action since tracking began in 2016.

The responsible use of resources such as food and fuels is also in the red, due to continued fossil fuel subsidies and the increasing demand for raw materials. Two bright spots are the 150 per cent rise in renewable energy capacity and 9 per cent drop in the amount of hazardous waste produced, against 2015 levels.

The biggest gains were made in infrastructure and industrial innovation, especially in East and North-East Asia, which includes China, Japan and South Korea. However, report coordinator Arman Bidarbakht-Nia said that such gains were “not environmentally sustainable” when placed alongside the other indicators.

Southeast Asia and the Pacific regions fared the worst, with additional regressions in indices such as clean water and sanitation, and inequality.

The Asian Development Bank recently reported that 4.7 million more people in Southeast Asia fell into extreme poverty last year due to the Covid-19 pandemic. In total, over 23 million Southeast Asians now live on less than US$1.90 a day.

Covid-19 has further held back development, the report noted.

“In this time of great change and difficult challenges, there is an urgent need to redouble efforts to fully implement the 2030 agenda for sustainable development, especially for those furthest behind,” said Armida Salsiah Alisjahbana, under secretary-general of the United Nations.

The report warned that vulnerable groups in Asia Pacific could face greater risks due to Covid-19. They include children, women, poor households, the disabled and those facing social exclusion. A third of global child refugees also live in the region.

The report cited studies showing the number of children eating a healthy, diverse diet dropping 32 per cent in Indonesia and 68 per cent in the Philippines. Help for the most malnourished – numbering about 32 million – were also found to be disrupted during the pandemic.

The number of children missing regular doses of vaccines against diseases such as chickenpox and polio jumped during the pandemic, compromising their future health. In India, 3.5 million children did not get their usual vaccine regimen in 2020, compared to 2.1 million in 2019.

Meanwhile, pregnant women went for less pre-birth check-ups that protect both mothers and their unborn children. At the peak of the pandemic in mid-2020, clinics saw a 30 per cent drop in antenatal care visits year-on-year. The number of risky home deliveries was also higher on-year since March 2020.

Online search keywords such as “experiencing sexual violence” jumped as much as 70 per cent in Malaysia during lockdowns.

Recorded migrant deaths rose sharply in 2021, in part due to military conflicts in Myanmar and Afghanistan.

“Leaving no one behind, regardless of age, gender, race, ethnicity, location, disability or migratory status, remains the central commitment of the 2030 agenda, and the need to reach those who are furthest behind has never been greater,” the report noted.

The amount of data available to researchers to track the 17 Sustainable Development Goals doubled since 2017, but over 10 per cent of 231 tracked metrics could not be measured in 2021. Another 35 per cent of data was considered insufficient for full analyses.

Data on gender, water-based biodiversity, as well as peace, justice and institutions are limited, according to the report. It called for greater coordination between national and international agencies for data collection.

Philippines provided the most data, providing information for 76 per cent of tracked figures, though not all were considered in sufficient detail. Northern Mariana Islands furnished the least details, for only 13 per cent of figures. The bottom six countries were all Pacific island states.

“It is often several characteristics that together create vulnerabilities,” said Bidarbakht-Nia. “A big part of vulnerabilities is still invisible to us. We need a lot more data to better understand them.”