Promoting No Impact Week for the second year, the Asian Development Bank headquarters in Manila stepped up their low-carbon, full-on sustainable lifestyle project with a complete switch to renewable energy

The Asian Development Bank in Manila is now running on 100 per cent renewable energy, with a complete power switch made on Thursday during the institution’s celebration of No Impact Week.

It is a project to encourage staff to ‘walk the talk’ in the areas of waste management, food security, sustainable transport, water conservation, and energy efficiency and energy access for all.

The aim is to promote a healthier and more sustainable lifestyle with a low carbon and water footprint, and the campaign focuses on a different theme for each day of the week: Monday is trash, Tuesday is transport, Wednesday food, Thursday energy and Friday is water, while Saturday is allotted for volunteerism and community work and Sunday is designated as ‘Eco-Sabbath’ or a day to refrain from using any resources.

The change in energy supply – from primarily using electricity from the grid to solar power generated on-site and geothermal energy from the provinces of Albay and Laguna – is the main highlight of this year’s No Impact Week, which the Bank first started in 2013.

As an institution we are strongly committed to expanding the use of renewable energy across Asia and the Pacific, so it is only fitting that we walk the talk in our own headquarters

Switching to 100 per cent renewable energy supply will enable ADB to reduce its yearly carbon footprint by nearly 50 per cent, as well as achieve an emission reduction of more than 9,500 tonnes of CO2 equivalent, said Bruce Davis, ADB vice president for administration and corporate management, at the official ceremony held at the ADB headquarters during Thursday’s Energy Day.

“As an institution we are strongly committed to expanding the use of renewable energy across Asia and the Pacific, so it is only fitting that we walk the talk in our own headquarters,” he added.

The geothermal supply is an agreement with AdventEnergy Inc., a licensed retail electricity supplier of Aboitiz Power, a power generation firm in the Philippines. The Bank will purchase an average of 1.5 million kilowatt hours (kWh) of electricity per month. Combined with about 50,000 kWh of monthly electricity from the rooftop solar panels, the two sources will be able to cover the entire energy needs of the corporate office and facilities that houses over 2,600 staff and consultants, said ADB.

‘No impact is high impact’

Operating the institution and reducing its environmental impact is an on-going process, Davis noted during the opening event of ADB’s No Impact Week on Monday. “Clearly, there is a lot more to do, and there always will be as the Bank continues to grow in terms of people and projects,” he said.

The ADB No Impact Week is a step towards more individual commitments, in addition to institution-level initiatives. Organisers arranged several activities for each thematic day to promote a more eco-conscious lifestyle. On Monday’s Trash Day, for example, ADB organised a Waste Market in the headquarters to allow staff and consultants to dispose of old appliances, e-waste like obsolete mobile phones and laptops, spent car batteries, and other junk. 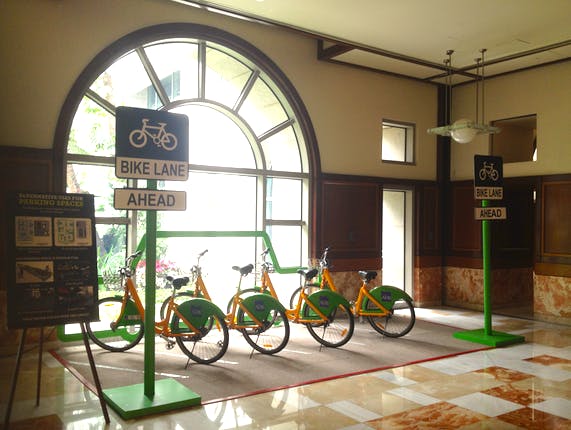 A ‘park-ing’ installation showing how one parking slot is enough for about four bicycles from ADB’s bikesharing scheme. Image: Elga Reyes

Bindu Lohani and Stephen Groff, both vice presidents in ADB, also championed the cause with their personal commitments to take the stairs instead of the elevators. Groff, in particular, has shunned the energy-wasteful elevators since the beginning of the year, climbing each day to his eighth-floor office, to improve his health.

In 2013, ADB achieved a reduction of 3.3 per cent in energy consumption against a target of one per cent from the previous year. This amounts to enough energy that can power about 3,000 average Filipino households for a year, noted ADB.

Paper usage was also reduced by 7.9 per cent (target was two per cent), and there was a 15.2 per cent reduction in solid waste against a target of two per cent. They also halved the sales and use of disposable containers and paper cups and eliminated selling and using bottle waters in meetings and events. The indoor office temperature was also increased by one degree last year, which resulted in a significant amount of savings.

This year, aside from the switch to 100 per cent renewable energy, there is a plan to work on turning off more computers at night. Currently, only 12 per cent of computers are completely switched off, and this is an area where ADB “can make an enormous difference”, noted Davis.

Another initiative is making the upcoming Annual Meeting of the Board of Governors in Astana, Kazakhstan in May a sustainable event. Davis said the Bank is working with the national government to obtain ISO certification for the meeting.