Asia is projected to be hit harder by climate change than anywhere, and this year clearly showed why. Here are some of the climate change disasters that ravaged the world’s most populous continent in 2019.

As countries, desperate to protect their economies, continue to drag their feet on climate action, such calamities have become a reality facing many across the world’s most populous continent.

Asia may be the region most vulnerable to climate change, but the myriad of environmental and social ills communities across the disaster-prone continent grapple with, ranging from rivers clogged with waste to runaway development, exacerbate the impacts of a changing climate.

And as the globe warms, it is those lacking the resources to cope who suffer the most. Climate refugees, long a term only found in climate change reports, are now on the move, fleeing droughts, heat and rising seas.

Here are some of the climate disasters that ravaged Asia this year.

1. India and Pakistan baked in a heatwave

With temperatures hot enough to melt roads, a record-breaking heatwave swept across Pakistan and India from May to June this year, upending the lives of millions across the Indian subcontinent.

Jacobabad in Pakistan saw a temperature of 51 degrees Celsius, making it the hottest place on earth. In India, the highest temperature occurred in the northern state of Rajasthan, reaching a blistering 50.8°C.

For many, the heatwave turned deadly. In India, it claimed more than 184 lives in the eastern state of Bihar alone, with many more reported dead in other parts of the region.

With this year’s monsoon rains delayed, the heatwave was the second-longest ever recorded in the region, exacerbating water-scarce conditions across South Asia.

Heatwaves have become more extreme and frequent, but as the world warms, stifling heat is set to become an even bigger problem, according to a 2018 study published in Nature. By 2100, three out of four people on earth could be subject to at least 20 days of heat per year if climate change remains unchecked, the study found.

The issue is particularly acute in megacities, where searing heat, aggravated by dense concrete structures, mingles with toxic air pollution, putting the lives of urban dwellers at risk. Worsening urban heat, experts predict, will lead to a global healthcare crisis that will cost cities billions worldwide.

2. Chennai was hit by a water crisis

When no rain fell in Chennai for 193 days, life changed for the city’s 10 million residents as water scarcity, and the crippling uncertainty, exhaustion and despair it entails, became a new daily reality.

To quench residents’ thirst, Chennai dispatched tankers to source water on its outskirts and supply its drought-stricken neighbourhoods. But at the height of the crisis, demand was rarely met, making it hard for residents to cook, wash or keep businesses afloat. 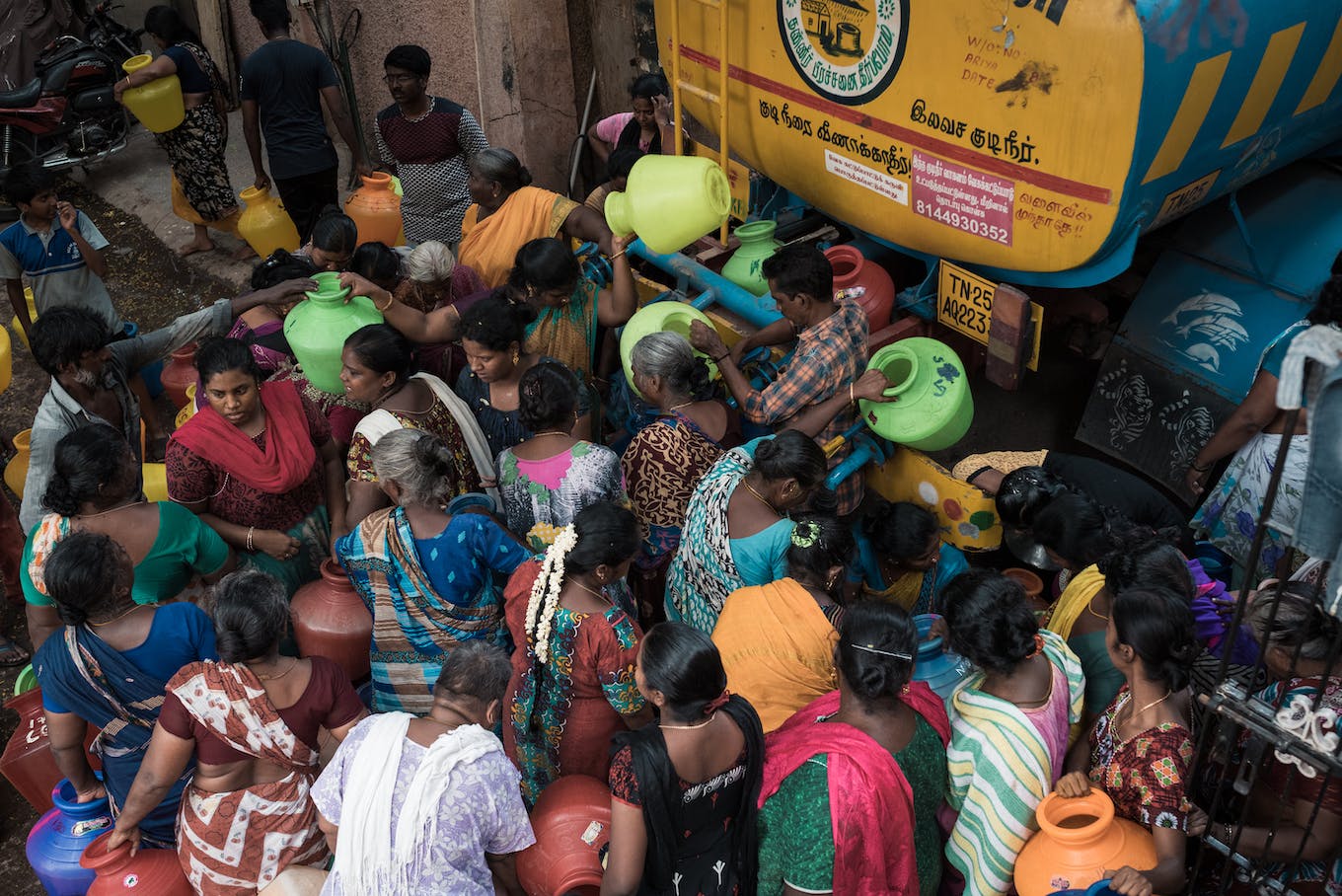 Residents fill up their water pots in M. S. Nagar, an informal settlement in the locality of Chetpet in Chennai, in August 2019. Tensions rose when people started shouting as some tried to push their way forward, or took more than the rationed amount. Image: Tim Daubach, Eco-Business

Chennai’s vulnerable communities, and especially women and children, were hit the hardest. Lacking the resources to cope, they were forced to spend hours waiting to get their water pots filled, putting them at risk of sleep deprivation, sickness and diminished opportunities.

The fatal heatwave that swept across India and Pakistan from May to June exacerbated the crisis, with temperatures in Chennai rising to 42°C. Maximum average temperatures in the city are also higher than ever, increasing the demand for water.

Water scarcity is a fate facing many communities across the Indian subcontinent. In many regions, drought has forced people, particularly farmers, to uproot themselves in search of somewhere else to live, transforming once-lush paddy fields into abandoned farmland scarred by dried riverbeds.

As the climate changes, urban water crises like Chennai’s are expected to become a nationwide problem in India. According to a 2018 study by Indian government thinktank Niti Aayog, 21 Indian cities will run out of groundwater by 2020.

Rivers swelled to dangerous levels literally overnight, eventually bursting their banks. With roads, bridges and railways damaged by the floods, many areas became inaccessible, leaving communities in need of clean water, food and other supplies cut off.

As houses were swept away by the deluge or buried under landslides, millions fled their homes to seek refuge in relief camps.

Monsoon-triggered floods befall the region every year. The monsoon season normally occurs from June to September, when southwest winds pick up moisture from the Indian Ocean and drop it as rain on land.

But climate change is disturbing this seasonal cycle. The rains, which the agriculture-reliant region needs for its survival, now often fail, or are extremely intense.

According to the India Meteorological Department, this year’s monsoon season in India arrived late, saw the highest amount of rain in more than 25 years and was the latest to withdraw in recorded history.

The heavy downpours came a year after India’s southern state Kerala was hit by its worst floods in nearly a century.

4. The mighty Mekong teetered on the brink of collapse

Southeast Asia’s largest river is facing unprecedented pressures, setting up the six countries, and 60 million people dependent on the river’s churning waters for their livelihoods, for potential disaster.

Due to a combination of proliferating hydropower construction and intense dry weather, the Mekong, which stretches for some 4,500 kilometres from its source in the Tibetan highlands through Myanmar, Thailand, Laos and Cambodia before emptying into the South China Sea in Vietnam, was at its lowest in a century this year, threatening food supply.

The monsoon rains—critical for the agriculture-dependent region’s survival—arrived late, with dry conditions lasting well into July. This made it impossible for many rice farmers across the region to plant their main crop. 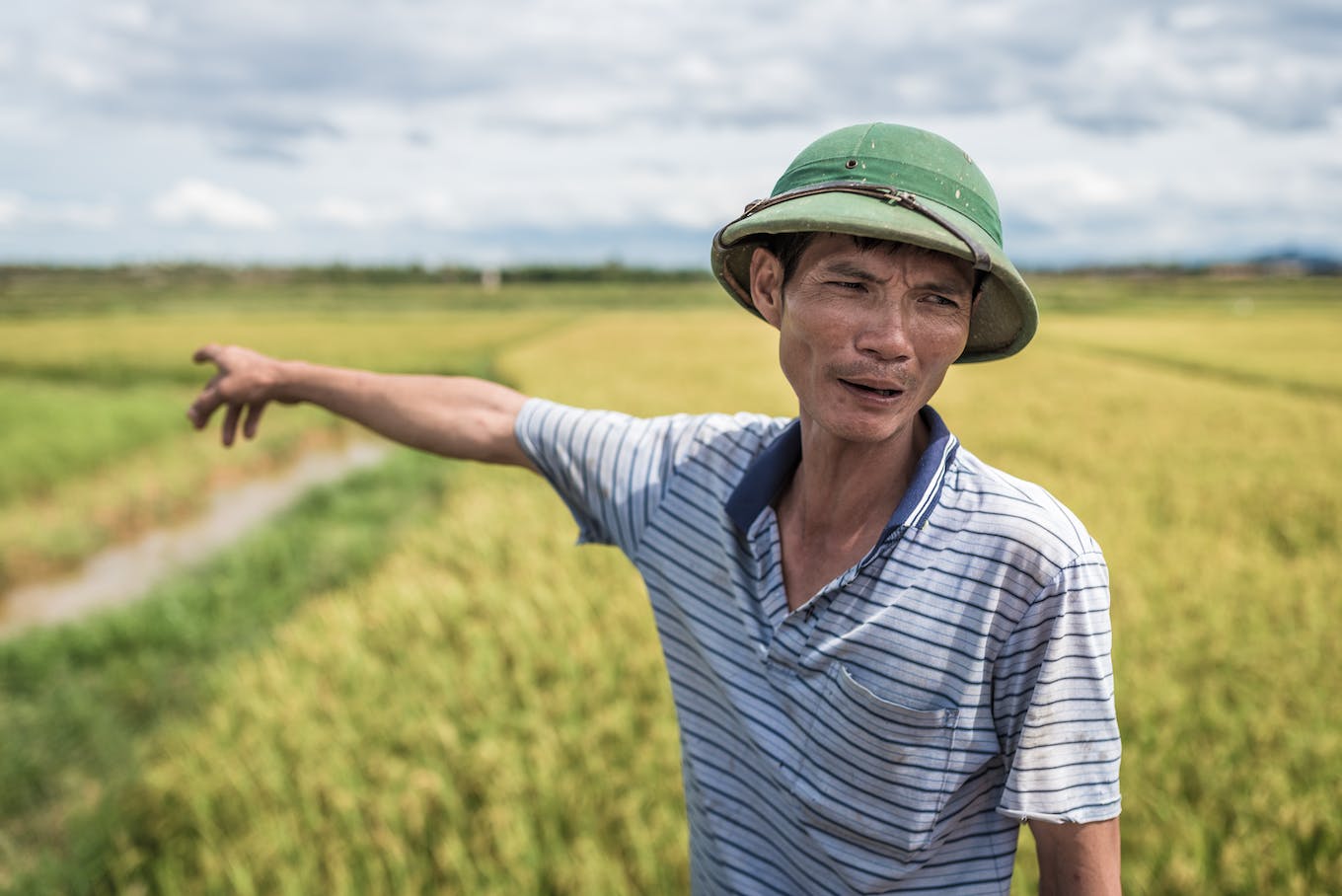 Nguyen Quang Anh, 40, speaks to Eco-Business in August, 2019. The rice farmer from Quảng Bình province in Vietnam is grappling with increasingly erratic weather patterns, which have caused yields to drop by 50 per cent. Due to this year’s lack of rain, Nguyen had to reconstruct his irrigation canals for the first time since his family established the fields in 1964. Image: Tim Daubach, Eco-Business

Hydropower along the Mekong is growing faster than anywhere else in the world. This is expected to have devastating consequences for fish reproduction in the river basin, which is the largest inland fishery globally.

Also affected is Cambodia’s Tonle Sap lake—the largest freshwater lake in the region—which relies on the Mekong’s annual monsoon-triggered flood pulse and the sediment it brings to keep its fish stocks alive. Fish from the lake represents 70 per cent of the country’s protein intake.

Droughts and disruptions to the Mekong’s water flow are set to become more common, experts warn, saying that this could eventually cause the entire ecosystem to collapse.

This year’s dry conditions persisted due to the El Niño phenomenon—a part of a routine climate pattern that causes high air pressure in the western Pacific, leading to drier-than-average rainfall conditions in Southeast Asia. As the globe warms, the impacts of this phenomenon are becoming more severe, researchers say. There is also evidence that climate change is shortening the monsoon season considerably.

Another disaster is unfolding in the Mekong Delta, where rapid urbanisation, sand mining and excessive groundwater exploitation cause the land to sink, while climate change causes the sea to rise. As seawater pushes steadily inland, it threatens to destroy homes, contaminates aquifers, and renders once arable soil infertile.

Due to the acceleration in large-scale dam construction, sediment load the river once brought down to the delta—Vietnam’s rice bowl, which is vital to the nation’s food supply— is now greatly reduced.

As a result, most of southern Vietnam, including the Mekong Delta and the nation’s economic hub, Ho Chi Minh City, could be frequently flooded as early as 2050, experts warn. Within a century, the delta might disappear completely.

These days, many coastal dwellers across the Indonesian archipelago watch in horror as the water edges closer to their homes.

Rising seas are among the biggest climate threats facing Indonesia, with thousands of its low-lying islands at risk of being inundated by 2050. But nowhere in Indonesia is the threat as acute as in Jakarta, the country’s capital and economic powerhouse.

In the traffic-clogged megacity of 10 million, the impacts of climate change are exacerbated by various man-made ills, ranging from runaway development to excessive and unregulated groundwater extraction.

The expansion of its concrete jungle and draining of aquifers causes Jakarta to sink faster than any other city, faster, even, than the melting of polar ice causes the seas to rise. Today, almost half of Jakarta is already below sea level.

With attempts to save the city having failed thus far, the Indonesian government announced plans this year to relocate the capital to the Indonesian portion of the island of Borneo, stoking fears that the move would destroy Kalimantan’s pristine forests and peatlands, and could derail Indonesia’s climate targets.

Indonesia is not the only country that is vulnerable to rising sea levels. From Mumbai and Bangladesh to Bangkok and Ho Chi Minh City, encroaching seawater threatens to swallow coastal populations.

With an El Niño pattern causing the dry season to be harsher than usual, fires, started mainly by farmers clearing land, were raging in Indonesia’s rainforests once again this year, sending billows of toxic smoke into Malaysia and Singapore, four years after Indonesia’s worst haze crisis on record.

The catastrophic fires, which laid waste to an area several times the size of Singapore, claimed at least two lives, but the hazardous haze that blanketed Indonesia for months has also caused long-term damage to human lives, leading to reduced child survival rates, respiratory diseases and other health impacts, experts say.

Researchers say that global warming has exacerbated the impacts of recent El Niño events, causing temperatures to rise and droughts to last longer. This increases the risk of forest fires like the ones in Indonesia, Australia and the United States.

Indonesia’s forest fires released more carbon dioxide into the atmosphere than the blazes in the Amazon this year, according to the European Union’s atmosphere observation programme.

7. Powerful storms slammed into the Philippines

20 typhoons hit the Philippines this year. The latest storm, Typhoon Kammuri, ripped through the country on 3 December, bringing heavy rains and gale-force winds.

The typhoon, which caused the country to cancel some plans for this year’s Southeast Asian Games, claimed at least 17 lives and led to close to half-a-million people seeking refuge in evacuation centres.

Typhoons leaving trails of destruction across the Philippines make headlines every year, but these giant storms have grown 50 per cent stronger in the past 40 years due to warming seas, researchers have found. And as the climate changes, things will get worse.

According to the Intergovernmental Panel on Climate Change, global warming is set to increase the frequency of El Niño weather events in the Pacific, which cause surface waters to warm up. This, in turn, will intensify tropical storms and rainfall.