There Will Be Water: A bright spark in dark times

There Will Be Water documents an engineer's efforts to use seawater and sunlight to grow crops in deserts. The story of cool innovations and hard struggles against systemic barriers is inspiring viewing for all sustainability advocates.

There Will Be Water short trailer from CPH Film Company on Vimeo.

There Will Be Water.

This determined declaration is an apt title for Danish filmmaker Per Liebeck’s award-winning documentary about British engineer Bill Watts and his relentless effort to turn some of the driest places on earth into fertile fruit and vegetable farms.

Released last October and screened on Tuesday at the Transitions Film Festival in Sydney, There Will be Water chronicles the origins of The Sahara Forest Project, which began as an idea by Watts and his team to tackle food, water, and energy crises, some of the most pressing challenges of our time.

In a nutshell, Watts’s solution uses seawater, sunlight, and little else to grow fruit and vegetables like tomatoes, cucumbers, and capsicums in deserts, in arid regions like the Middle East and North Africa.

You would be forgiven for dismissing it as unrealistic at first glance; delegates at the 2009 United Nations Climate Change Conference in Copenhagen, Denmark did the same when Watts first proposed the concept.

But after years of pitching the project, the Sahara Forest Project team clinched a deal with the governments of Norway and Qatar to build a pilot model in the Qatari desert, with Watts helming the project’s technical aspects and delivery.

The technology There Will Be Water introduces to audiences is unprecedented. It begins with seawater being drawn in from the coast to the facility, where it is put to two separate uses. First, it goes into a concentrated solar power plant, where mirrors concentrate sunlight to produce heat, which is then used to boil water and power steam turbines.

Second, the seawater is poured down corrugated cardboard walls that flank greenhouses built in the desert. The evaporation of the water cools the indoor environment, keeping plants cool even as daytime temperatures regularly exceed 50 degrees Celsius. The water vapour from this process then condenses on the roof, forming freshwater that can be used to irrigate crops.

The bulk of the documentary follows Watts as he wrangles with bewildered contractors, budget constraints, and temperatures hot enough to warp plastic in order to deliver the pilot project in just seven months.

The middle-aged, unassuming engineer emerges as an almost hero-like figure when the project is successfully unveiled in time for the Doha climate conference, despite several exasperating technical and logistical setbacks, such as the inability of plastic valves in the project’s pumping system to withstand the desert heat, and construction delays by the contractor.

But his triumph is short-lived, as the Qatari funders have no interest in providing additional funding to keep the greenhouses running beyond the initial one-year trial period. No clear reason is given for this.

The Sahara Forest Project’s initial success, and its ensuing hunt for ways to keep the technology alive with new sources of funding and interested partners, imparts lessons that should make for valuable viewing for aspiring clean energy entrepreneurs.

As Piers Grove, executive director of Sydney-based clean energy accelerator EnergyLab said in a panel discussion following the documentary screening, Watts demonstrates “determined insanity” in doggedly pursuing his vision for almost a decade, and this was crucial to his eventual success—the Project went on to construct similar facilities in Jordan and Tunisia after the end of the Qatar pilot in 2013. 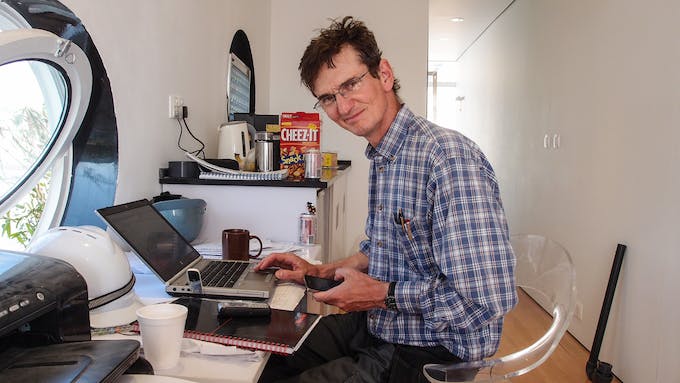 Reflecting on the Qatar setback in the documentary, Watts also raises important questions that all sustainability businesses need to ask themselves: How do innovators, through their marketing, inspire political will and get the public to care? How can entrepreneurs make sure they don’t languish in the “valley of death”—that is, the chasm between receiving funding for an initial pilot and sustainable commercial success?

Perhaps more importantly, the film also opens a discussion about what governments and financiers do to support such solutions. As panellists in the post-film talk pointed out, these are crucial challenges that Australia needs to overcome if it is to achieve sustainable growth.

For example, Australia has its own solar-powered greenhouse at Port Augusta in South Australia, called the Sundrop Farm.

But the government owned green bank which provided essential financial support to get Sundrop off the ground—the Clean Energy Finance Corporation (CEFC)—has for years been besieged with threats of funding cuts and closure, said Miriam Lyons, climate campaigner at activist group GetUp!

Blair Palese, chief executive officer of anti-fossil fuel campaign group 350.org Australia added that money from the fossil fuel lobby was holding back government support of solutions like Sundrop, which solve environmental challenges but also have the potential to create new jobs.

“Australia has innovators like Watts,” said Palese, pointing to the Sundrop project. But their potential is curbed by political and financial factors.

Despite raising inconvenient questions about political will, investor appetite and public support for sustainable solutions, and skirting around issues like cost and the scale of deployment needed for these greenhouses to meaningfully move the needle on water, food, and energy issues, There Will Be Water is ultimately a bright spot of hope in a world where environmental challenges often feel overwhelming.

The technology and concept provides inspiration for entrepreneurs and engineers, while policymakers, investors, and activists can chew on the questions Watts and his colleagues raise about how governance and business ecosystems can do their part in driving progress on climate, water, and food security.

The documentary is a worthwhile watch for anyone interested in creating or supporting ideas that enable the transition to a sustainable future. After all, growing more salad vegetables alone may not single-handedly feed or save the world; but innovators who emulate Watt’s perseverance, creativity, and optimism just might.