The Conscious Festival draws biggest turnout yet in Singapore

Welcoming 3,800 people this year, the carbon neutral, zero waste festival has grown six-fold since its first edition in 2015.

About a week before the Singles’ Day sales bonanza encourages Singaporeans to spend like mad on just about anything, a very different kind of festival took place in Singpapore’s Chinatown.

Sustainable lifestyle event The Conscious Festival, organised by Green is the New Black, drew 3,800 people to Parkroyal on Pickering Hotel, a six-fold increase on 2015, when 600 people attended the first edition held at a co-working space.

One of the few green festivals in Singapore, the carbon neutral, zero waste event seeks to challenge Singapore’s consumerist culture with an alternative take on how to live.

Here are some snapshots from the festival, where more than 70 conscious fashion, food, art, beauty and lifestyle brands were up for grabs, and where discussions about responsible consumption, health, travel, and work took place, on 3 and 4 November. 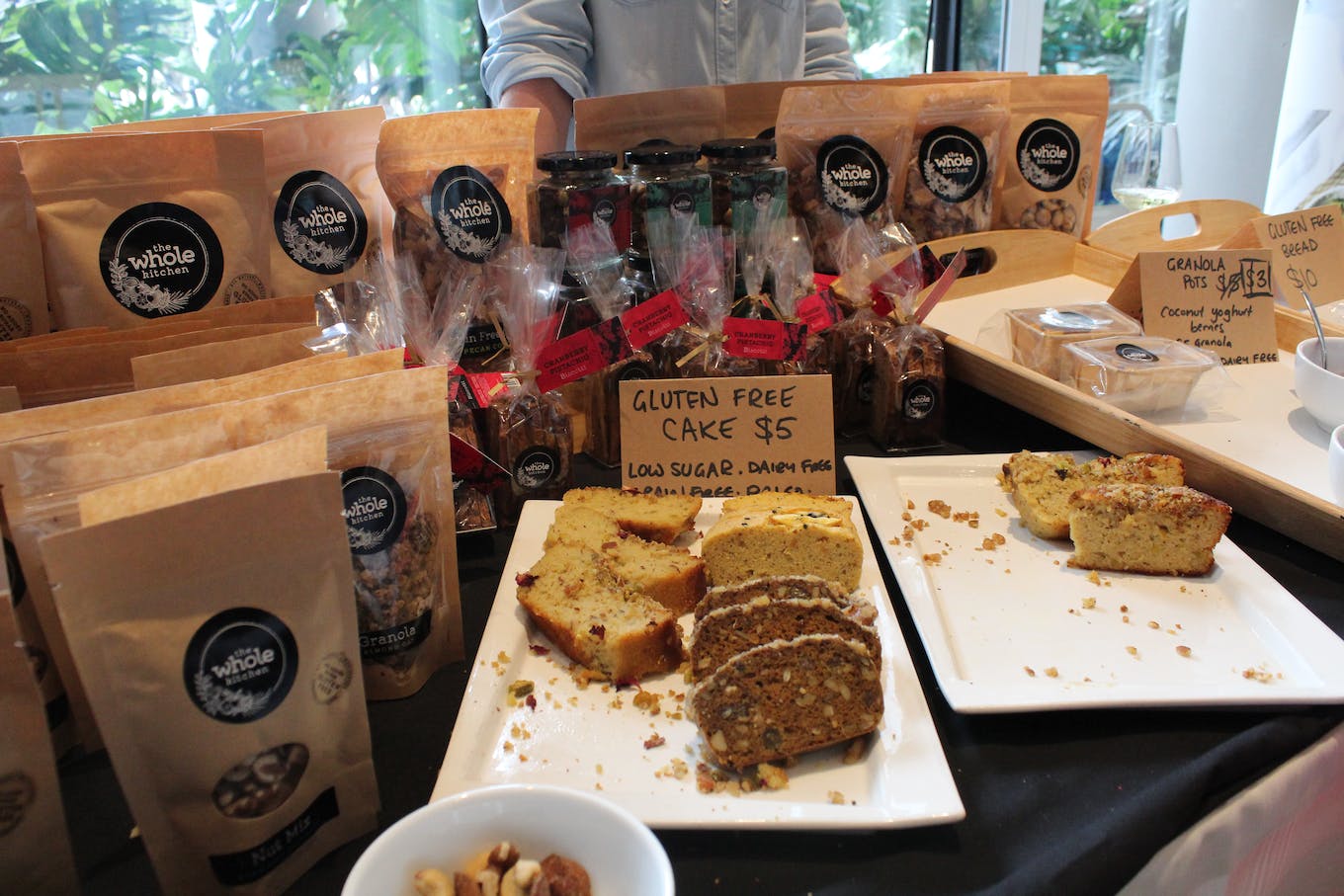 The Whole Kitchen sold a variety of dairy-free pastries at the event. Image: Eco-Business

Dosirak, Urban Bites and The Whole Kitchen were just some of the stalls dishing out plant-based food such as tempeh, Mediterranean salads and dairy-free pastries.

“Business was overwhelming. The festival was great to introduce visitors to vegan gelato and show them that the texture of vegan gelato is just as good as dairy products,” Jack Chan, co-founder of Butterknife Folk, a local vegan dessert store, told Eco-Business. 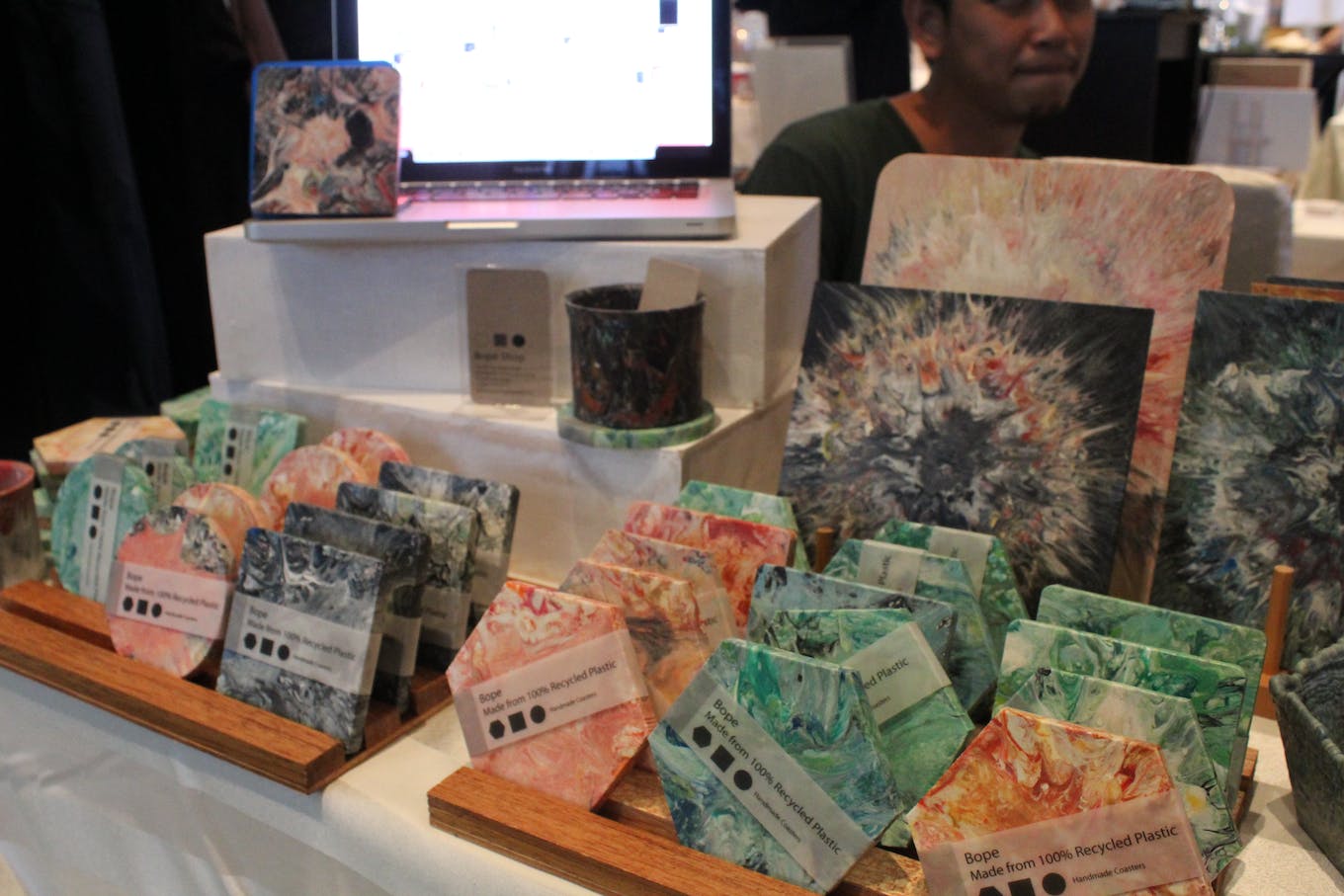 BOPE sold coasters, mousepads and cups made from 100 per cent recycled plastic from Thailand. Image: Eco-Business

The festival featured a variety of stalls selling items made from recycled plastic, such as BOPE, which uses plastic sourced from Thailand, the world’s sixth largest plastic-polluting country, which recently announced its ban on plastic waste imports. 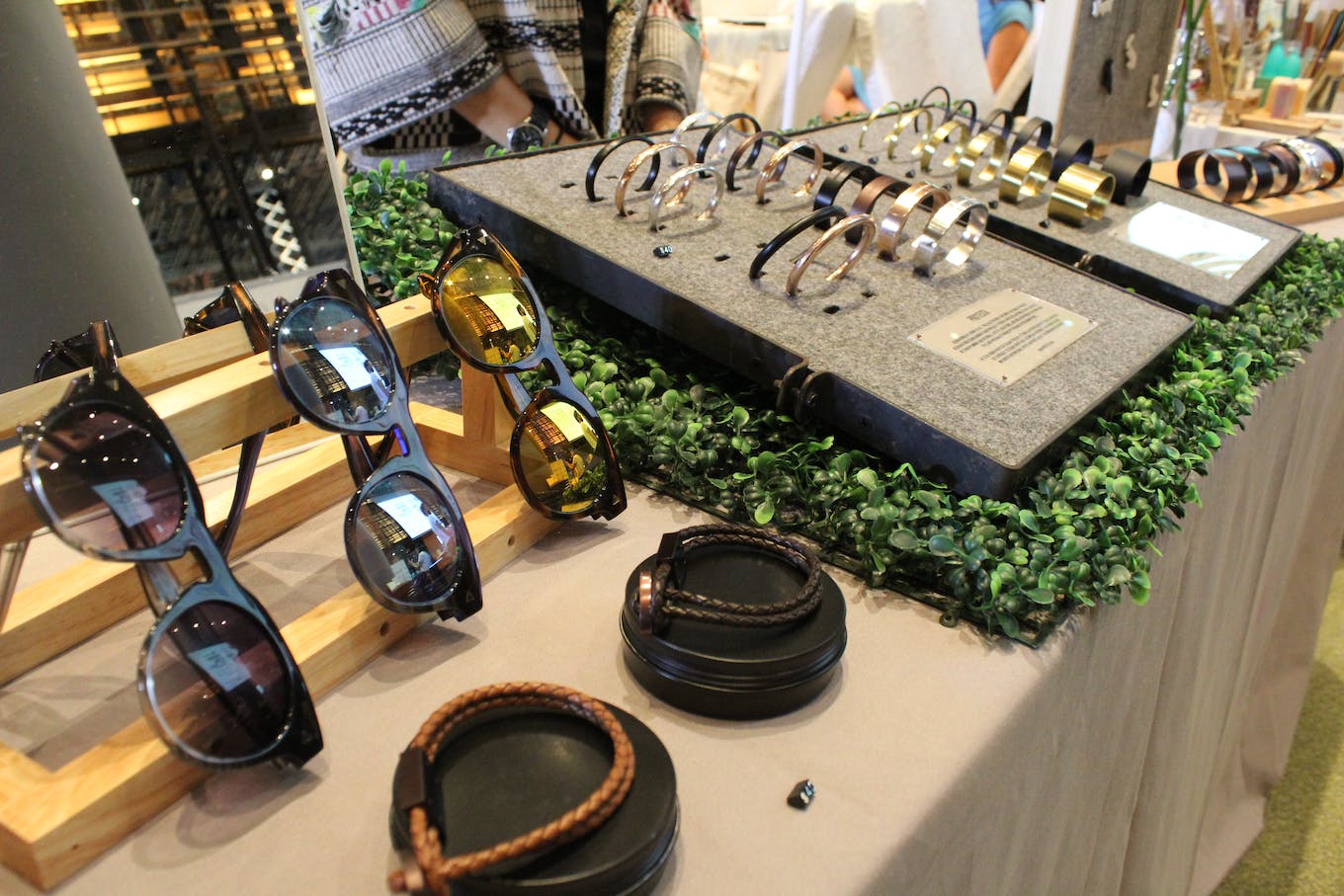 Protesta, a stall selling bangles made of 95 per cent recycled aluminium, and sunglasses made of plastic recycled from beaches. Image: Eco-Business 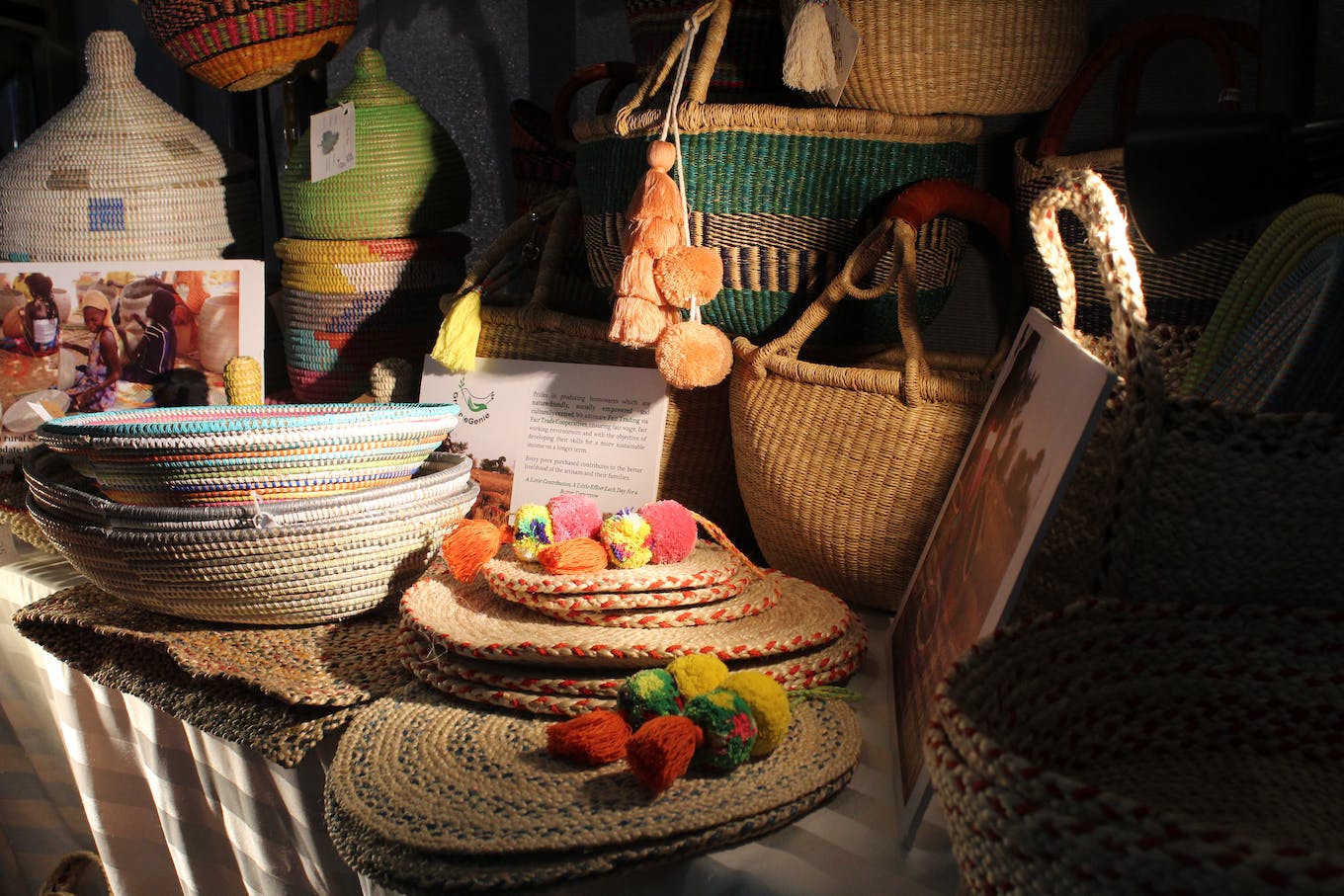 Green fashion brands at The Conscious Festival included Hunter+Boo, which champions transparency in its supply chain and sells children’s wear made with eco-friendly dyes, and Touch The Toes, which uses upcycled materials in its activewear.

There was a variety of organic and sustainable skincare brands at the festival, ranging from Skincare Co, which sells zero-waste beauty products, to Vega Organics, which sells skincare free of palm-oil. 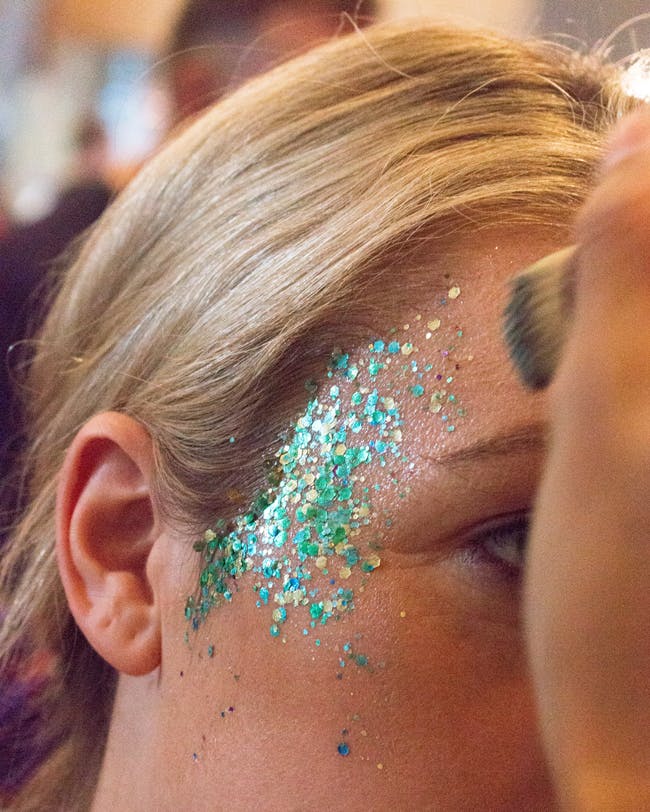 Anyone who talked about “little green steps” they were making in their lives received free plant-based glitter painting. Image: A Future of Green

Festival visitors feeling particularly festive could adorn themselves with glitter made by The Mermaid Cave, which is certified as marine and wastewater compostable. Scientists have previously called for a ban on glitter, as it is mistaken as food by marine life. 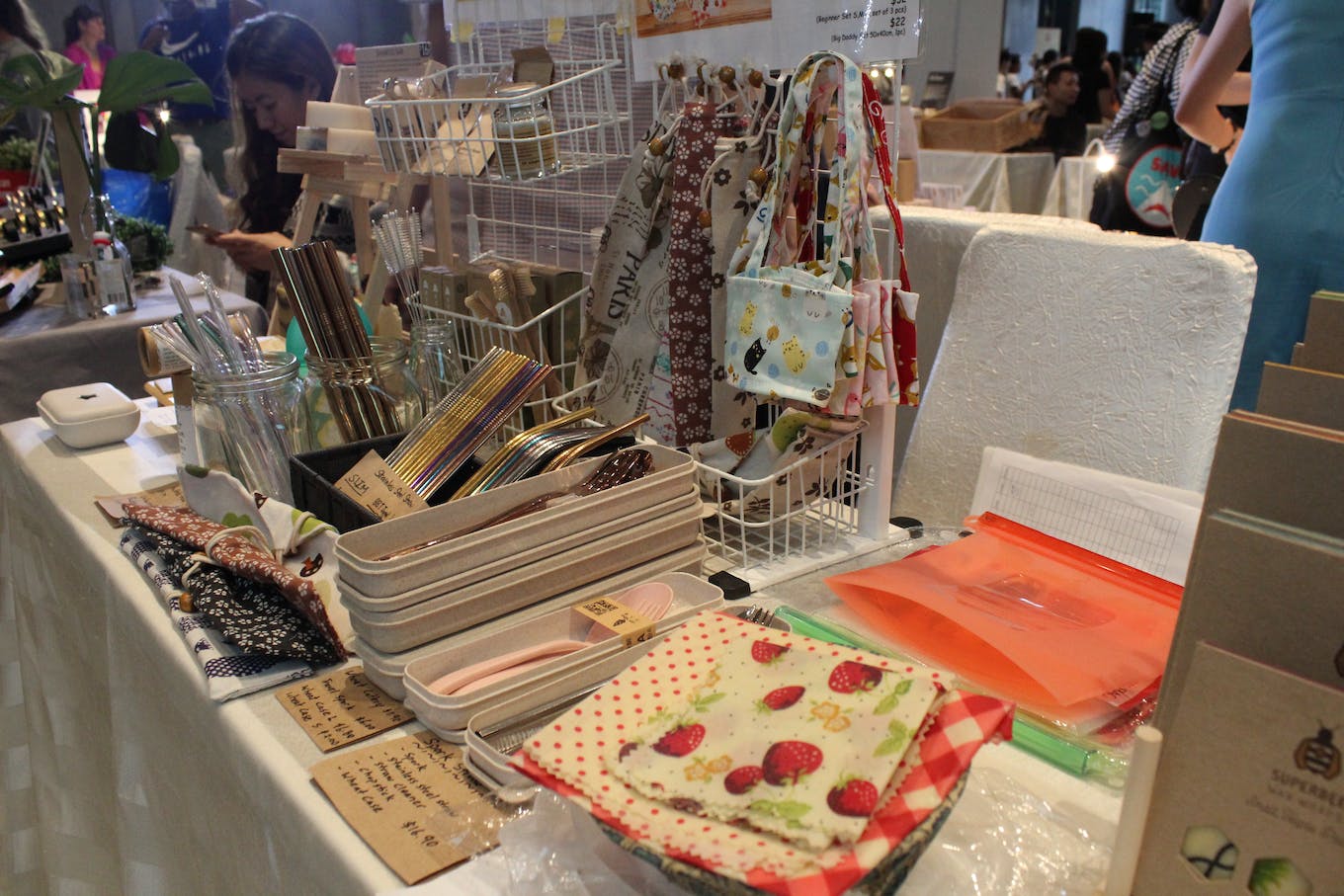 UnPackt brought their reusable wares, like beeswax wraps and silicon food bags, from their home base at Jalan Kuras to the festival. Image: Eco-Business

Reusable and packaging free products were widely available at the festival, including from Singapore’s first packaging-free store UnPackt. Co-founder Jeff Lam told Eco-Business that sales were so good that certain items such as reusable cotton facial pads were sold out. 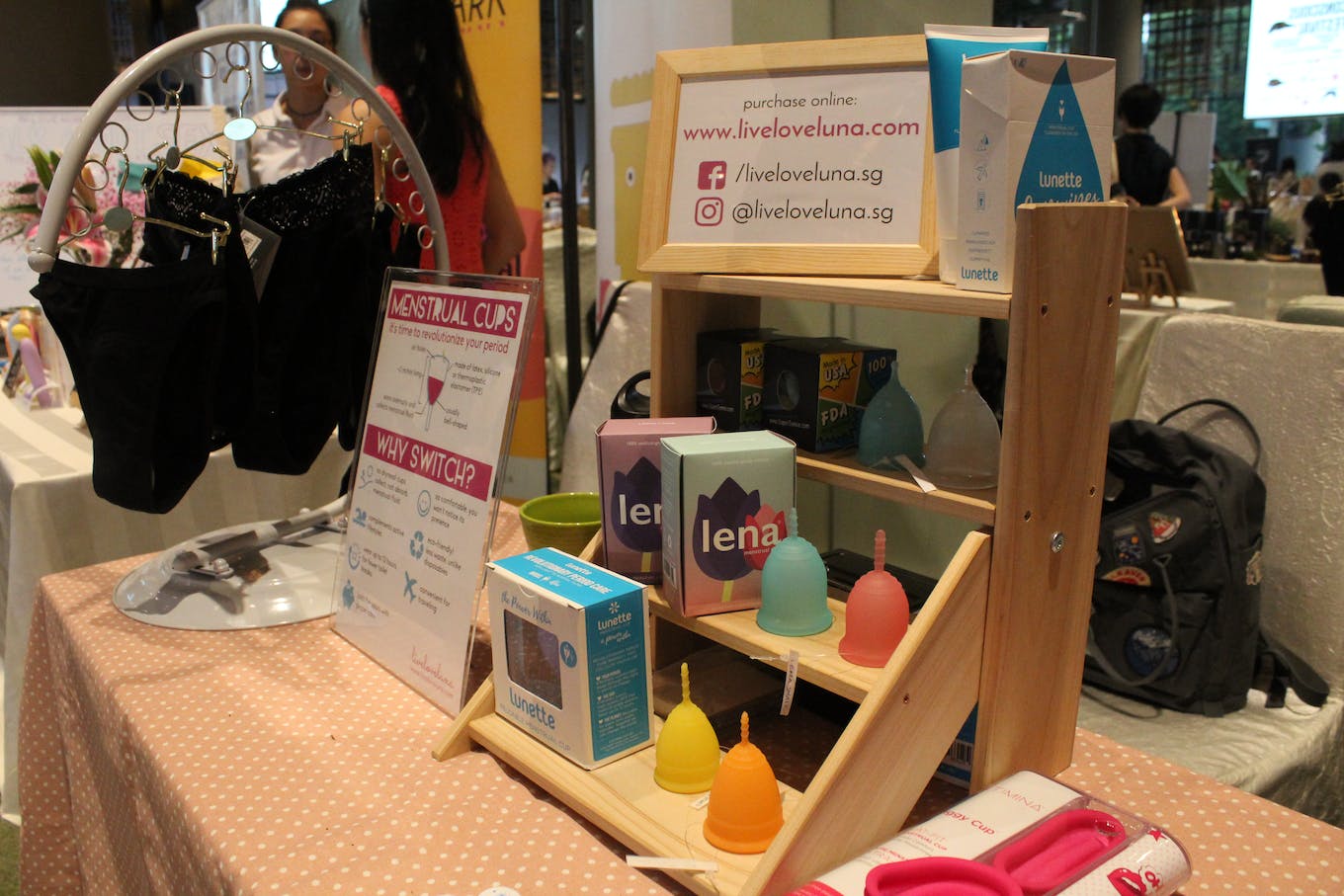 Reusable menstrual cups vendor LiveLoveLuna was also at the festival, hawking an array of colourful options. Each menstrual cup lasts for years, an environmentally-friendly alternative to the dumping of 11,000 single-use pads in a woman’s lifetime. 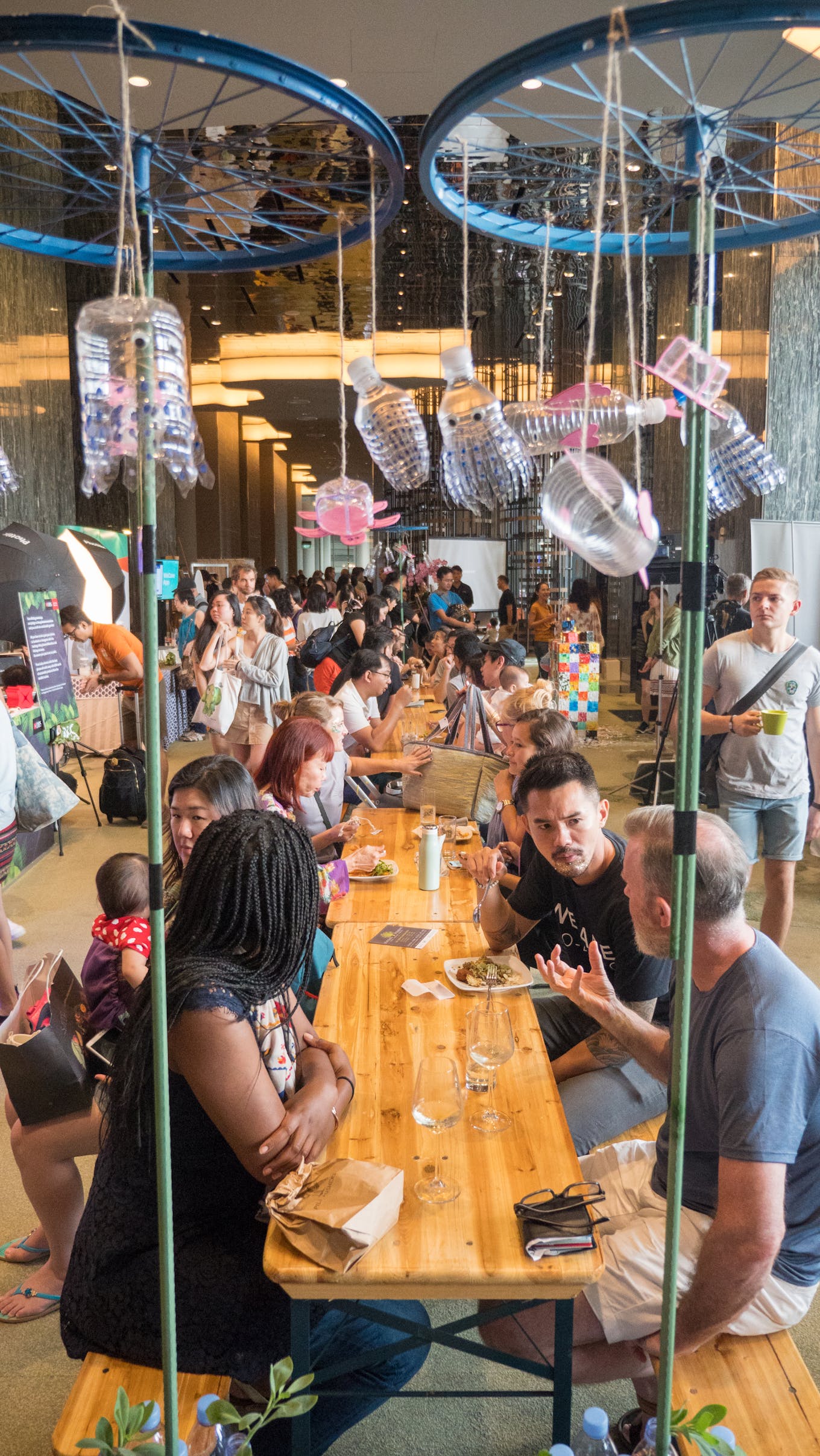 With materials donated by the public, these eco-brick stools and art installations were made by Green Nudge, an initiative set up to tackle the problems of contaminated recyclables and waste generated at events. Image: Green is the New Black

A new addition to this year’s festival was the immersive art experiences. Visitors were able to sit on eco-brick stools made from upcycled materials, next to plastic art installations made of discarded plastics.

While the marketplace was free to enter, the panel discussions were ticketed. A portion of all ticket sales was donated to Animals Asia, a Hong Kong-based charity aiming to end animal-cruelty in Asia. Over 50 speakers and social entrepreneurs discussed the themes Live, Work, Consume and Travel.

Stephanie Dickson, co-founder of GITNB, said ahead of the Consume panel that this year’s festival had come a long way from the first edition, when single-use plastics and meat were served. This year’s event eliminated both.

“With nature being lost at unprecedented rates globally, it is more important now than ever to conserve the natural environments we enjoy travelling to,” said Janissa Ng, communications manager at WWF-Singapore on the Travel panel. 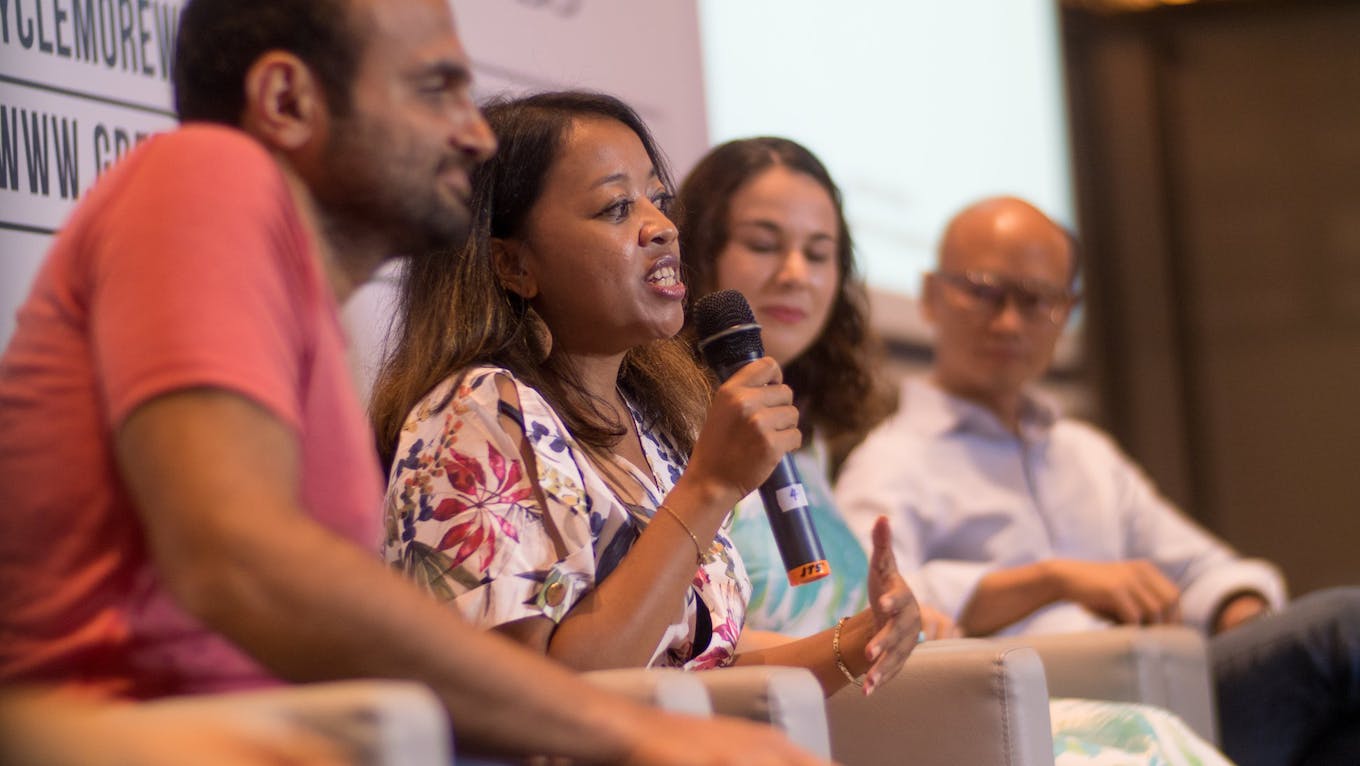 Sitraka Ratsimanohatra, a zero-waste traveller and blogger, speaking on the Travel panel. Image: Green is the New Black

Ratsimanohatra also spoke about choosing sustainable accommodation: “Look at their water reduction policy. Do they have a recycling system? Do they compost? Do they reduce single-use plastics?” 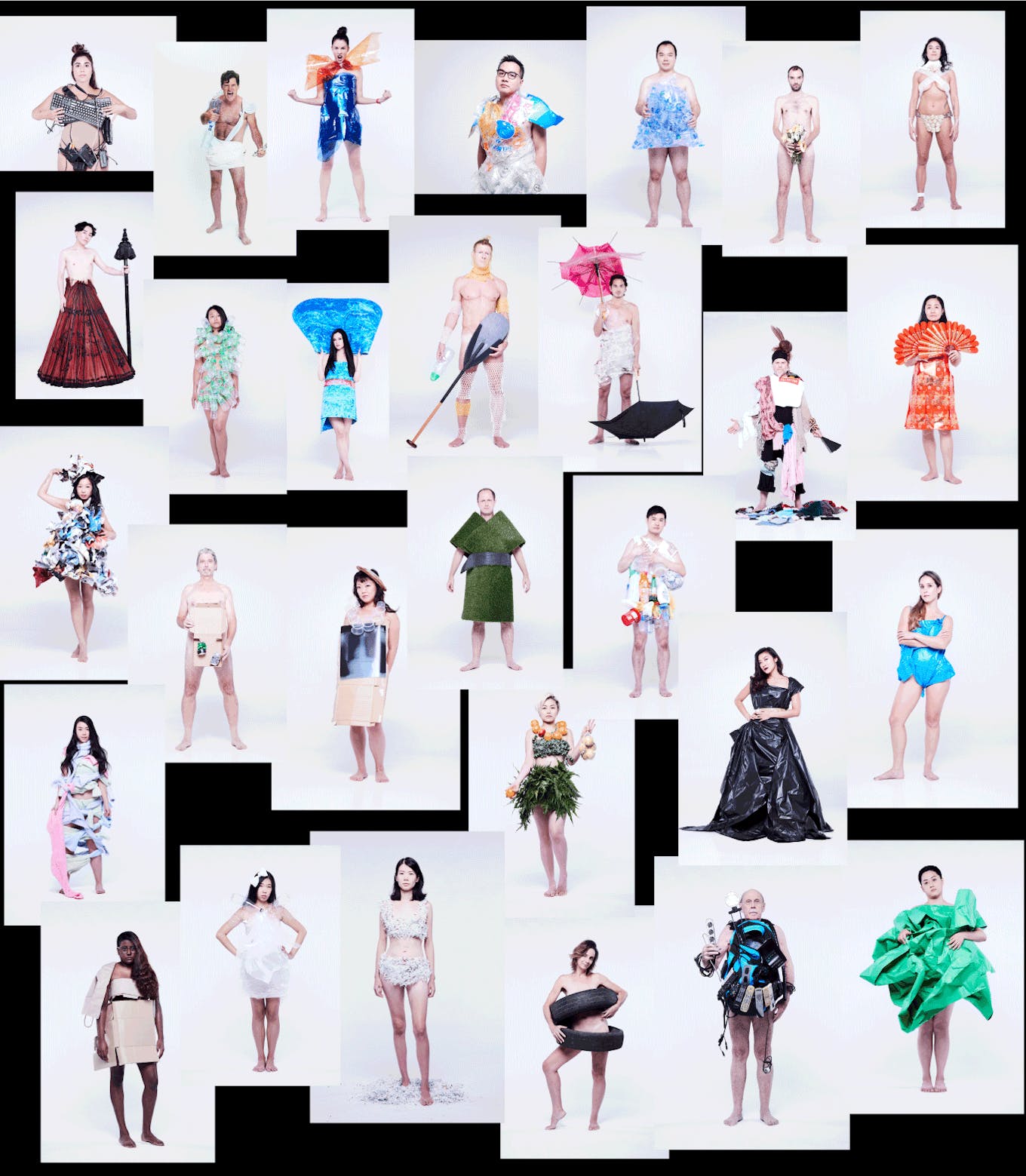 For the second year running, a photo exhibition of 30 ‘Green Warriors’ was on display at the festival, featuring eco-influencers from Singapore and Hong Kong, dressed in food, plastic and textile waste to promote the idea of reusing waste to make new products. Images: Flavien Prioreau, Zoé Kovacs

The event came six months after The Conscious Festival’s debut in Hong Kong, where 4,500 visitors attended the event at PMQ arts hub.

As for plans for future festivals, Dickson told Eco-Business: “We will continue to push our boundaries to innovate, design and support the green movement with our festivals in Singapore, Hong Kong and our online content. We’ve also started exploring what our third city might be, as we hope to play a connecting role in Asia.”