1 out of 10 Singaporeans do not have enough food on their tables, according to the non-profit Food Bank. So why is the food waste problem in the country so serious? This comic video hopes to get people thinking. 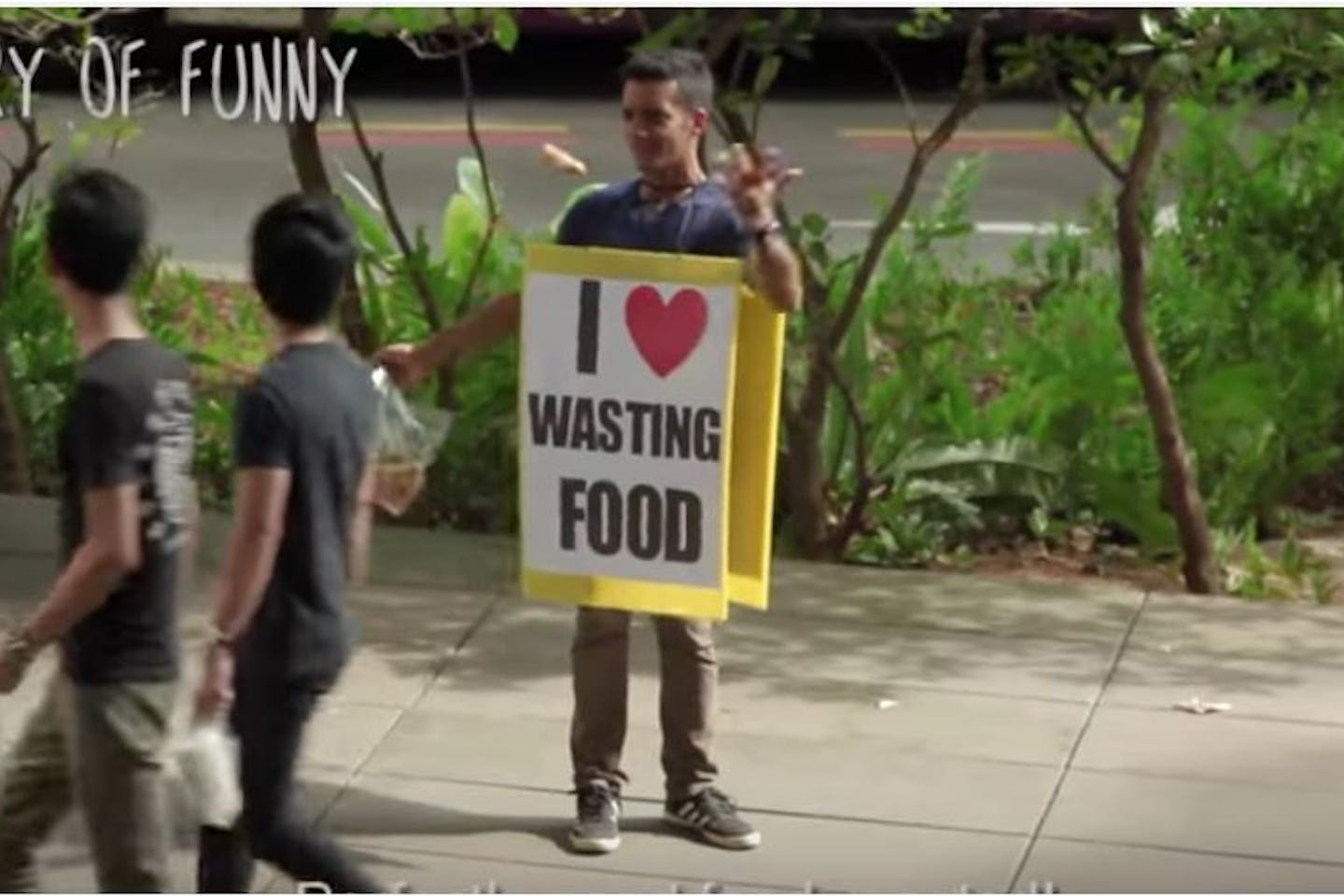 Some got curious, others became furious.

Hopefully, though, everyone got the message - that food is precious and  should not be wasted.

Singaporeans were caught on video reacting to a ‘food waste party’, where a man along Orchard Road started throwing food onto the ground and stomping on it in public.

The ‘food waster’ was actually comedian Haresh Tilani, one half of a comedic duo who call themselves Ministry of Funny (MOF).

Why food waste? Tilani said they decided to focus on something they have been aware of for a while - the insane amount of food that is wasted each day in Singapore, one of the most developed cities in the world.

“It’s just the irony of the situation that we wanted to highlight, especially off the back of very progressive developments in countries like France (with their law that forbids food wastage by supermarkets),” Tilani told Eco-Business.

In the video, Tilani puts on a big sign that reads “I (heart) Wasting Food” and then throws away and even stomps on good pieces of bread in front of a bewildered group of passers-by. The video, which has been viewed by over 30,000 people, is still generating discussions in social media one year after it was launched on the MOF’s YouTube channel.

If people got so angry when I was wasting food in front of them, shouldn’t we all get super angry about all the food being wasted in general? Or is this just a case of we don’t care about what we don’t see?

“Stop!” said one. Another told him: “Dude, you could have given this to someone who actually needs it.”

The over-all reaction over the scene was that of agitation. And yet, Tilani believed that many Singaporeans are starved of the whole truth behind the seriousness of the food waste problem in the country, and that if they only knew, they would find it hard to stomach.

To feed information on this social problem to the public, MOF interviewed Food Bank co-founder, Nichol Ng, who started the charity in 2012 with brother Nicholas.

The non-profit organisation welcomes donations from companies and individuals of unused or unwanted food and then distributes these to the needy through family service centres, various types of homes, and soup kitchens.

According to Ng, Singaporeans waste the equivalent of up to 188 double decker buses of food every day.

And yet, 1 out of 10 Singaporeans are food-insecure. “This means that they do not earn enough money to put food on the table throughout the whole month,” Ng said.

Quite a stark contrast to Singapore being a country with the largest concentration of millionaires in the world, Tilani observed.

Singaporeans do have a reason to get angry when food is blatantly wasted in front of them, Tilani said.

So how could they possibly stomach the fact that as much as 700,000 tonnes of food is wasted a year in the country?

“If people got so angry when I was wasting food in front of them, shouldn’t we all get super angry about all the food being wasted in general? Or is this just a case of we don’t care about what we don’t see?” Tilani said in the video.

Just like all the videos MOF makes, Tilani said the goal of this video is to make the viewers laugh, or think about something in a different way, or ideally, both.

“If the video results in positive change, then all the better,” he said.