Breakthrough casts aside fear that carbon captured and stored underground can seep back into the air and explode.

For the first time ever, scientists and engineers at Iceland’s Hellisheidi power plant have turned carbon emissions into a mineral similar to limestone within months, radically faster than anyone had predicted.

The power plant is the world’s largest hydrothermal facility, which also hosts arguably the world’s most advanced carbon capture programme.

In an interdisciplinary pilot project called Carbfix launched in 2012 and run by Hellisheidi’s operator Reykjavik Energy Company and Columbia University’s Lamont-Doherty Earth Observatory, 250 tonnes of CO2 was mixed with water and injected into volcanic basalt some 400 to 800 metres underground.

The team then monitored the formation’s chemistry through a series of observation wells. Within just a few months, scientists found that much of the carbon had mineralised.

In less than two years, 95 per cent of the total CO2 injected into the ground solidified into a blackish stone material.

“This means that we can pump down large amounts of CO2 and store it in a very safe way over a very short period of time,” said study co-author Martin Stute, a hydrologist at Columbia University’s Lamont-Doherty Earth Observatory. 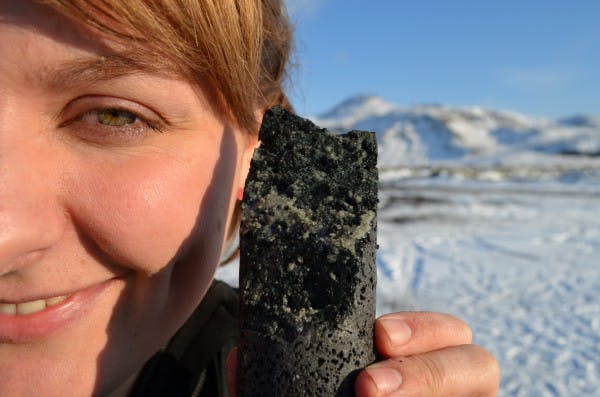 A geologist shows off a core taken from the CO2 injection zone at Hellisheidi power plant in Iceland. Image: Earth Institute, Columbia University

The procedure will be explained in an article to be published in the Science journal this week.

Based on this initial success, chemist and project manager for Reykjavik Energy, Edda Sif Arradotir, said the team is injecting emissions in another injection well at a greater depth of 700 to 1,300 metres, which plunges into much hotter rocks.

The team believes emissions will solidify faster in temperatures up to 270 degrees C (about 520 degrees F). “Eventually, the aim is to keep expanding until we capture all the gases,” said Arradotir.

If the technology proves stable and replicable, scientists believe it could be exported to other larger industrial nations, and significantly reduce CO2-induced climate change impacts.

Lead author Juerg Matter, an adjunct researcher at Lamont now based at the United Kingdom’s University of Southampton, said, “We need to deal with rising carbon emissions. This is the ultimate permanent storage—turn them back to stone.”