In a bid to ease population pressure on Sydney and Melbourne and revive regional economies, an ambitious private sector plan aims to build eight new cities in inland Australia and connect them with a high speed rail—all without a cent of public money.

A high-speed rail network connecting Sydney to Melbourne, eight new smart and sustainable cities and not a single taxpayer dollar spent: These are the three promises of an ambitious private sector plan to ease population pressure on Australia’s two largest cities and deliver economic benefits to its regional areas.

Proposed by a recently formed consortium Consolidated Land and Rail Australia (CLARA) earlier this year, the CLARA plan is a US$200 billion initiative seeks to “rebalance” Australia’s population away from the capital cities of New South Wales (NSW) and Victoria over the next 35 to 50 years.

Speaking at a business lunch organised by the Property Council of Australia on October 7, CLARA chairman Nick Cleary said that “Sydney and Melbourne have become overcrowded, and liveability is reducing on a daily basis”.

“As the population grows in Sydney, Melbourne, and Australia, we need an alternative solution,” he said. “CLARA is a part of a population strategy for our nation; it’s about rebalancing the Austalian settlement.”

At the heart of CLARA’s proposal are eight new cities—two in Victoria and six in New South Wales—that will be developed from scratch on greenfield sites. They will feature technologically advanced communications infrastructure, be powered by renewable energy and advanced healthcare and education facilities, among other things.

The target population of each city is about 400,000 residents and the company says it already has the land required to build these cities under its legal control. In total, CLARA aims to house between 2.8 million and 3.2 million people across its project timeframe.

These cities will be located close to existing regional towns such as Shepparton Goulburn and Yass Valley, and will be connected to one another—as well as to Sydney and Melbourne by a high speed rail line. CLARA has yet to decide on a technology for the high speed rail line; contenders include Japan’s magnetic levitation train technology—widely considered the fastest and most advanced high speed rail option—and the TGV high speed trains that operate in France and other parts of Europe.

“Things are open at this point in terms of what system will be used for the high speed rail,” said Cleary. To balance speed and access to opportunities in the eight cities, the line would likely feature an express line which goes straight from Sydney to Melbourne and an all-stations line, he added. 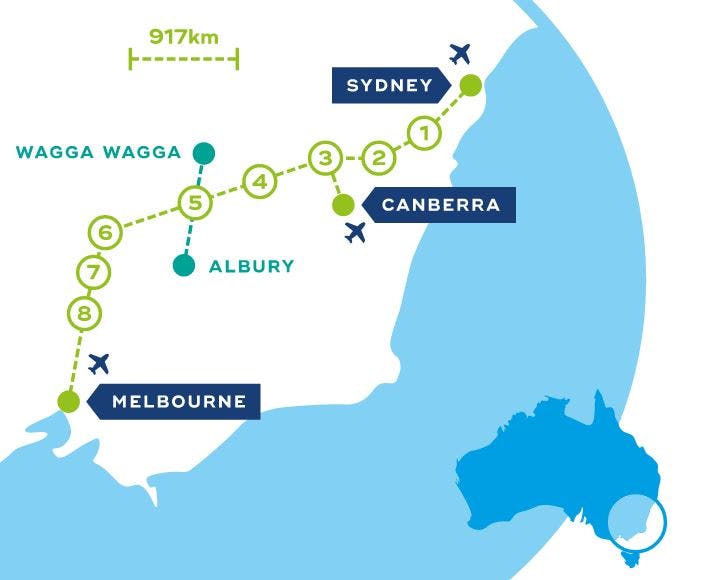 CLARA’s proposed locations of eight new smart cities in inland Australia, all of which will be connected to Sydney, Melbourne, and Canberra by high speed rail. Image: CLARA

All this will be funded without public monies, added Cleary. The model CLARA uses hinges on a concept known as “value capture” which uses the proceeds from the rise in the value of a plot of land once it has been developed and enhanced with physical and social infrastructure.

CLARA has not revealed exact figures due to commercial confidentiality requirements, but according to reports, the project is aiming to turn rural land worth A$1.2 billion into residential lots worth A$180 billion.

While some transport experts have dismissed this model—which relies heavily on the future speculation of land prices—as little more than a real estate venture and a potential “financial train wreck”, CLARA is nevertheless optimistic that it can generate the required funding and overcome other hurdles.

“The eight cities will pay for the high speed rail, and bring new apartments online too,” stressed Cleary.

He added that he was confident of attracting residents to the eight new cities, because they would be the “smartest, most connected and sustainable”, and would also have more affordable homes than the typically high prices in Sydney and Melbourne.

CLARA is working hard to secure the anchor tenants and offer 10,000 jobs in each city, he added. This is the critical threshold for amenities like supermarkets to flourish. Once this has been passed, organic urban growth can take place, Cleary explained.

CLARA’s plan has the potential to make travel between our major east coast capitals much faster and easier than before while unlocking the economic potential of our regional areas.

The company has also begun consulting with communities that would be affected by the cities to gauge their receptiveness to the developments, he added.

One such town is Shepparton, located some 150 kilometres north of Melbourne.

Greater Shepparton’s Mayor Dinny Adem in July this year hailed high speed rail as a “game changer”, and added that the project would also allow businesses in the capital cities to attract employees from further afield.

Of course, a new city with a population of 400,000 located near a town would cause some concern among residents, Cleary acknowledged. But the advantages—such as close proximity to healthcare, education, and employment options that the new cities would bring—outweigh the disadvantages, he noted.

The project aims to shift from the proposal to construction stage in next three to five years, shared Cleary. But it will be another 35 to 50 years before the full vision can be realised.

Also speaking at the event, Barry O’Farrell, former NSW premier, said that while CLARA does not intend to ask for public funding to succeed, the public sector can help the project succeed by lowering the administrative and technology barriers for implementation.

For example, the NSW and Victoria governments would need to agree on a train route that connects the two states, and agree on a common high speed rail technology for the line, said O’Farrell.

The public sector’s previous efforts to implement a high speed rail have so far fallen short, he added. The idea has been floated among Australia’s policy ranks since the 1980s, but the plans have not materialised mostly because they have not managed to demonstrate that they are viable.

“Australia needs to have vibrant regional cities, not just a drift to the east,” noted O’Farrel, a reference to Melbourne and Sydney’s proximity to the coast.

He added: “CLARA’s plan has the potential to make travel between our major east coast capitals much faster and easier than before while unlocking the economic potential of our regional areas.”