After China banned waste imports, Malaysia has taken up the slack with worrying consequences, a Greenpeace investigation has found. Much of Malaysia's imported trash—most of which comes from the US, UK and Japan—is not recycled, but dumped or burned.

In the 11 months since China banned waste imports in January, Southeast Asia has become the new destination of choice for the world’s trash.

One of the biggest new waste importers is Malaysia, and an investigation by Greenpeace has revealed that much of the waste sent there for recycling is dumped, burned or left to rot in illegal processing plants instead.

Malaysia announced an outright ban on plastic waste imports in October following a public outcry over pollution, but plastic waste from overseas continues to be dumped in poorly regulated refuse sites, ditched near water bodies or openly burned on roadsides, found Greenpeace’s study.

According to one waste executive interviewed in the report, there are about 500 illegal plastic waste facilities in the state of Selangor alone.

Research from the report, The Recycling Myth, carried out in October, found that Malaysia is being overwhelmed by plastic waste that it is unable to sustainably manage and process, leading to environmental and public health problems. 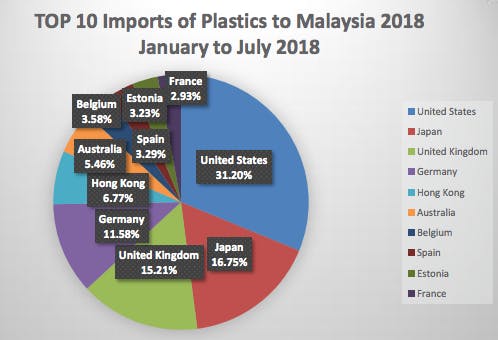 In the six months from January to July this year, Malaysia imported 754,000 tonnes of plastic, equivalent to the weight of 100,000 adult elephants.

The US is the biggest waste exporter to Malaysia. Plastic waste from the world’s largest economy grew from 97,544 tonnes between January and November 2017, to 195,444 tonnes from January to July 2018, according to data from Malaysia’s Department of National Solid Waste Management.

“The problem is not only a Malaysian problem,” said Heng Kiah Chun, Greenpeace Malaysia public and engagement campaigner. “The international waste trade system itself is broken and based on false assumptions about what really happens to waste.”

“All countries should put in place policies to reduce the use of single-use plastics to a point where waste export,  landfill or incineration is unnecessary. Malaysia and other developing countries should not be the dumping ground for plastic waste that other countries should be dealing with themselves,” he said.