Industry 4.0: When humans and robots go hand in hand

Amid concerns that the rise of industrial robots may soon render humans obsolete, Swiss automation giant ABB’s latest innovation may help shine a new light on what the future will look like when humans and robots can work together as partners.

Since January, political and business circles alike have been abuzz with talk of the fourth industrial revolution - the chosen topic of this year’s World Economic Forum (WEF) meeting held in Davos, Switzerland - and how it will transform the global economy in the coming years.

This technological revolution, which has the potential to disrupt entire industries and change the way we work and live, will see a fusion of technologies blurring the lines “between the physical, digital, and biological spheres”, says WEF founder and executive chairman Klaus Schwab.

Noting the transitions of manufacturing across time, Schwab wrote ahead of the WEF that the first industrial revolution used water and steam power to mechanise production; the second used electric power to create mass production, and the third used electronics and information technology to automate production.

“Now a fourth industrial revolution is building on the third, the digital revolution that has been occurring since the middle of last century,” he wrote on the WEF website.

This said fourth revolution, also known as Industry 4.0, is a new era in which businesses will grapple with technological disruptors such as artificial intelligence (AI), automation and robotics, and more.

Industry 4.0 is different from its predecessors in that it runs on an exponential pace and will affect every industry in almost any part of the world, notes Schwab.

New technologies for a new world

Already, companies and employees across the world are experiencing this shift.

Some emerging technologies that are fast gaining traction and experiencing phenomenal growth include the mobile Internet, cloud technology and the Internet of Things (IoT).

With smartphone and Internet penetration rising across the world, billions of people are now able to access their Internet via a range of devices and “tap into the cloud”, a phrase used to describe Internet-based computing that provides access to shared data across devices and on demand.

Meanwhile, the IoT – where daily and industrial objects are connected and are able to send and receive data – has spawned new possibilities in collecting large amounts of data and analysing it to improve everything from public services to daily conveniences.

But one key industry that has attracted much interest and controversy at the 2016 World Economic Forum lies in advanced robotics and AI, which is expected to become one of the top business trends from 2018 to 2020, says a report released at WEF titled ‘The Future of Jobs’.

Given the implications AI and automation have on the global economy, it is unsurprising that it has attracted so much attention. The report further puts this in perspective: By 2020, five million jobs will be lost as a result of AI and advanced robotics. About 7 million jobs will be lost and 2 million gained as a result of technological change, says WEF.

The global cross-sector survey – which polled 371 companies in 15 major economies across Europe, the Americas and Asia Pacific – showed that 94 per cent of respondents believe the increasing use of smart products, intelligent assistants and robots will fundamentally transform the types of skills and jobs that are required in the future.

The adoption of industrial robots in manufacturing worldwide is already on the rise.

The International Federation of Robotics (IFR) reported in 2014 that over 200,000 industrial robots were installed that year, and robot sales are set to grow at about 12 per cent on average per year from 2015 to 2017 – and at a higher 16 per cent per year for Asia Pacific.

IFR also estimated that there will be 2 million robots installed in factories worldwide by the end of 2017, of which 400,000 would be deployed in China alone.

Industrial robots are defined as machines designed to perform a whole variety of programmed tasks, including carrying and moving items, assembling, packaging and welding.

They can be built to provide a wider range of motion, or programmed to perform intricate tasks that might be tedious or dangerous for humans.

With industrial robots now capable of replacing human workers in the areas of heavy lifting or labour-intensive processes, economists are concerned that the rise of robots in factories could worsen income inequality by rendering certain human skills obsolete.

Factories worldwide that have started testing the effectiveness of these smart machines are getting mixed results.

A factory in China claimed replacing humans with robots helped boost productivity and quality. By using automated machining equipment and autonomous transport tracks, the Changying Precision Technology Company factory in central Guangdong managed to reduce its staff strength from 650 employees to just 60. It reported a 162.5 per cent increase in production, and a reduced defect rate of under 5 per cent from 25 per cent.

In contrast, luxury car manufacturer Mercedes-Benz recently declared that robots cannot provide the same flexibility and dexterity offered by human workers, as these machines cannot keep pace with the degree of customisations in its manufacturing process.

While many companies are adopting a cautious attitude towards robots, some experts say these machines can in fact help humans take on more advanced and rewarding work.

Leslie Willcocks, professor of technology, work and globalisation at the London School of Economics and Political Science’s Department of Management notes that jobs likely to be replaced with robots are “high volume, highly repetitive and not suited to humans”.

His research predicts that most workplaces in the future will not be fully-automated environments devoid of humans, but rather feature teams of humans and robots working together with assigned tasks they are ideally suited for.

We recognise humans and robots both have their own strengths, and when working together shoulder-to-shoulder in a safe manner, the workplaces of the future will be more flexible, produce better quality products with fewer resources, improve employee quality of life, and make companies more competitive.

Amid the current debate, Swiss automation giant ABB is re-examining how industrial robotics automation will look like in the future with its latest technological offering - YuMi.

A play on words, YuMi signifies “you” and “me” creating an automated future together, and is what ABB considers the world’s first truly collaborative and inherently safe dual-arm industrial robot specifically designed for small parts assembly.

At only 38kg, it is compact, portable, and has dimensions similar to a human: Its dual-arms feature seven axes of movement allowing greater dexterity and precision within a human-sized work space.

Ang Boon Hua, head of robotics at ABB in Singapore, says that safety is at the heart of YuMi.

“YuMi is able to fit into existing workspaces designed for humans, and is safe enough to work side-by-side with its human co-workers without cages or fences,” he says. 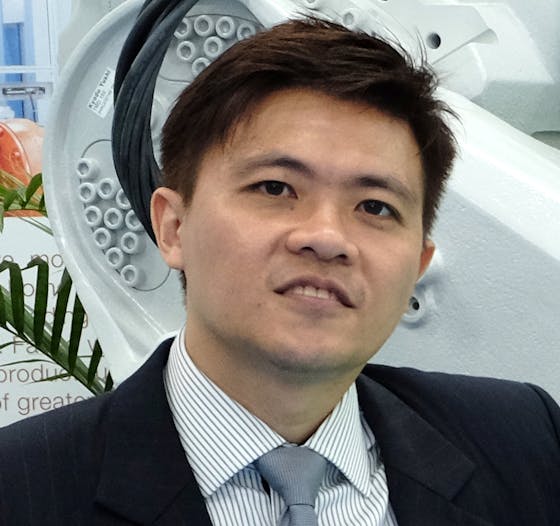 Should there be a collision with a co-worker, YuMi can stop its motion within milliseconds and restart again as easily as “pressing play on a remote control”, explains Ang.

It also has no pinch points – places where it’s possible for a body part to be caught, also similar to the human arm – thus eliminating the possibility of sensitive ancillary parts being crushed between two opposing surfaces as the axes open and close.

While safety remains one of the top reasons why some companies are hesitant to purchase industrial robots, some “forward-looking companies in Europe, the Americas and Asia are starting to use YuMi in their small parts assembly and testing processes, especially in the electronics sector”, he says.

ABB is also working with academic institutions to help companies develop innovative applications using YuMi, which Ang adds will make it easier for more companies “to deploy collaborative robots in their operations”.

Working with collaborative robots like YuMi is what allows humans to remain part of automation processes, notes Ang. 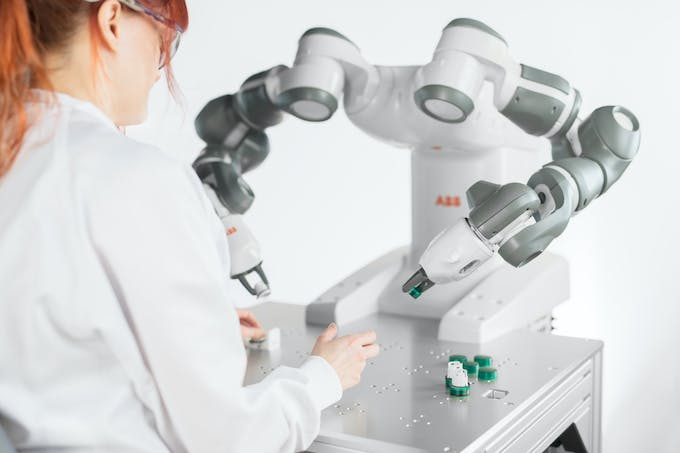 While the use of robots such as YuMi might be on the rise,  conventional robotic systems - typically heavyweight industrial robots that may have to be caged or fenced for human safety - will still be needed “for a long time to come and have several key advantages over current collaborative technology”, says Ang.

For instance, conventional robotic systems can handle higher payloads, have much faster cycle times, and are more resilient against harsh environments such as foundries.

However, collaborative robots are far less resource-intensive – in terms of system design, installation, commissioning and operation – in comparison, and also allow humans to do the jobs that require more strategic thinking and are less physically demanding or dangerous.

Ang believes that the introduction of collaborative robots into the work environment allows employees to shift from “dull, dirty, delicate and dangerous tasks into more stimulating roles with far more potential for satisfaction and advancement”.

Robots can support the creation of jobs when humans and automation achieve better results together than alone, in turn leading to greater productivity and the opening of “entirely new and untapped markets”, he says.

But this, however, will require companies to adopt a mindset shift.

“We recognise humans and robots both have their own strengths, and when working together shoulder-to-shoulder in a safe manner, the workplaces of the future will be more flexible, produce better quality products with fewer resources, improve employee quality of life, and make companies more competitive,” says Ang.

From sun to socket: The Philippines solar story

Thanks to an abundance of sunshine, affordable technology and investor interest, prospects for the solar energy industry in the Philippines have never been brighter. Swiss power and automation giant ABB is one company set on helping the nation embrace this opportunity.
From sun to socket: The Philippines solar story

Electric vehicle sales are soaring globally, but a lack of convenient charging infrastructure is holding the sector back from reaching its full potential. Swiss power giant ABB is using cloud computing to make chargers more attractive to businesses and users alike.
Boosting EVs with cloud power

[Magazine Exclusive] Frequently called the Little Red Dot, Singapore is known to punch above its weight in the global arena in economic and sustainability terms. Its embrace of technology to overcome its resource constraints has made it a prime candidate to become the world's first Smart Nation.
Singapore: The smart little red dot