[Magazine Exclusive] Frequently called the Little Red Dot, Singapore is known to punch above its weight in the global arena in economic and sustainability terms. Its embrace of technology to overcome its resource constraints has made it a prime candidate to become the world's first Smart Nation.

A casual observer looking at Singapore’s ultra-modern skyline, peppered with skyscrapers, is unlikely to think that commercial buildings are ideal for growing vegetables.

But as a matter of fact, about 160 football pitches of commercial space - or 8.5 million square feet - across the island currently used for ornamental plants could be used to grow water spinach, butterhead lettuce, and other leafy greens, says a team of students from the Singapore University of Technology and Design (SUTD).

Ang Guan Yang, a 24-year-old SUTD undergraduate, and his fellow students have analysed data on office space use in Singapore and created a solution called CorpCrops, which uses a combination of software and sensors to create a vegetable planter which can automatically control the temperature, light settings and nutrients required to grow greens in offices. 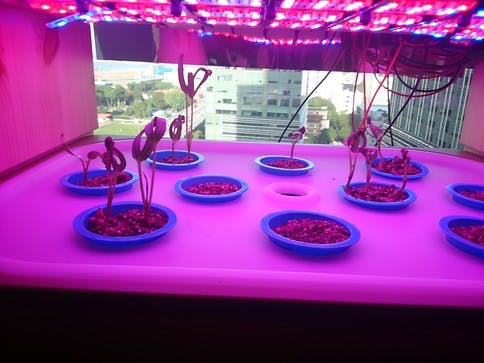 A group of undergraduate students are developing a smart farming system called CorpCrops, which will allow vegetables like butterhead lettuce to be grown in Singapore’s offices. Image: CorpCrops

Replacing ornamental plants with these mini vegetable farms will enable the city-state to produce up to 76 per cent of the vegetables it consumes, up from six per cent today. This allows Singapore to become “less reliant on vegetable imports for our nation’s survival, minimising risk to food security”, says Ang.

CorpCrops, whose founders aim to bring it to market by year end, is just one of many  ‘smart city’ solutions emerging across Singapore as the nation pushes ahead to become the world’s leading smart  nation.

Singapore’s Prime Minister Lee Hsien Loong last November laid out a plan for the country to become a smart city, and in doing so, “become one of the top countries in terms of quality of life, vibrancy, and opportunities for our people”.

One defining characteristic of smart cities is the use of information and communications technology (ICT) to improve urban life.

Sensors that observe how people move through a city, electronic meters which control energy use in buildings, smartphones, ubiquitous internet connectivity, and software which analyse data are among the key tools which help make a city ‘smart’.

We have set ourselves the goal of becoming a Smart Nation. In order to (…) become one of the top countries in terms of quality of life, vibrancy, and opportunities for our people.

In Singapore, the adoption of these technologies is guided by a new agency, the Smart Nation Programme Office (SNPO).

Singapore’s Minister for Environment and Water Resources, Dr Vivian Balakrishnan, who is also Minister-in-charge of the SNPO, notes in a recent speech that “we are on the cusp of another technological revolution… The advent of robotics, big data analytics and the internet of things will have a profound impact on the way we live, work, play, communicate, educate and entertain ourselves.”

Singapore is pursuing the idea of a smart nation “because we have no choice”, he says, pointing out that as much as 30 per cent of skilled jobs are threatened by trends such as robotics and automated machinery, which means Singapore has to break new ground and explore new economic opportunities.

This year alone, the government will offer S$2.2 billion worth of ICT tenders, which will be spent on web services, data analytics, and other tools, according to the city-state’s Infocomm Development Authority (IDA).

One aspect of daily living that has been greatly improved by technology is commuting.  Singapore’s Land Transport Authority, for example, has made real-time information on bus arrival times available to the public first via text message, and later, mobile applications (apps) since 2009.

The agency not only uses the data it collects to make official in-house applications, it also releases datasets on bus services, routes, arrival times, and traffic camera footage via a dedicated portal for the public and developers to access.

This has helped create several apps which allow commuters to check when their bus will arrive - and sometimes, find out if there are seats available.

Postgraduate student Jeremy Tay, 30, uses one such app, SG Buses, to improve his commuting experience. “I used to take taxis more frequently… But if buses are predictable and there is little waiting time, they are a better, cheaper, and more eco-friendly option,” he says.

SMRT and StarHub will contribute data to this system, including video footage from train stations, information about travel patterns collected from commuters’ farecards, and anonymous telecommunication data.

Janet Ang, vice president, Systems of Engagement and Smarter Cities, IBM Asia Pacific, tells Eco-Business that this is just one example of how integrating data from diverse sources can help policymakers be agile and responsive to a city’s needs.

She points to the ‘gamification’ of energy use - that is, providing a constant stream of data so that users can compete among themselves to reduce their household electricity consumption - as an example.

Commercial buildings are also turning to smart solutions. Intelligent building management systems technologies embed smart meters and sensors throughout a building to keep track of how and when energy is being consumed.

For instance, the National Library Building, an ultra-modern 16-storey complex in the city centre, is fittied with Singapore’s most widely-used building management technology: Swiss power and automation giant ABB’s i-bus system. The i-bus software has helped the library consume 17 per cent less energy than it was designed for, and 32 per cent less than the national average.

Johan de Villiers, Managing Director, ABB Southeast Asia, notes that the company has developed a thriving business in helping “cities to become more energy efficient and to use power and resources in more sustainable ways”.

IBM’s Ang adds that beyond the world of structured data – that is, quantitative data collected from sensors, meters, and other devices – a whole realm of ‘unstructured’, or qualitative data from sources such as social media posts can be analysed by businesses and governments to gain greater insights into the needs and expectations of the public.

Matthias Berger, senior researcher at urban research institute Future Cities Laboratory (FCL), adds that even more opportunities will emerge if the quality of data gathered is improved and made available to researchers and citizens.

For example, tracking energy use in commercial buildings in 15-minute intervals - rather than monthly averages - could help companies pinpoint when electricity use peaks and cut energy consumption, he says.

Goh Chee Kiong, the Singapore Economic Development Board’s (EDB’s) executive director for clean technology and cities, infrastructure & industrial solutions, says that Singapore’s transport solutions, such as electronic toll payment systems and communication networks for transport for instance, have been exported to other countries in Asia and the Middle East.

Its knowledge on shaping a city that is technologically advanced and liveable is also coveted internationally, says Goh, referring to the country’s role in helping build a new capital city for the Indian state of Andhra Pradesh as an example.

The island offers itself as a ‘living laboratory’ for testing smart city solutions, says Goh, adding that EDB works closely with international firms such as IBM, Panasonic, and Siemens, to conduct trials for new technologies in Singapore.

Many of these are test-bedded in the Jurong Lake District in west Singapore, where 1,000 sensors control and monitor processes such as traffic and street lights. The government plans to test a total of 15 smart solutions at Jurong Lake District to give a “glimpse of what a Smart Nation could look like”, says the IDA.

Sometimes, agencies can get carried away in implementing new technologies that they see overseas, or that companies bring into Singapore. As long as we decide on which of these technologies to adopt based on whether it can improve life in Singapore, a lot of the decisions we make will be the right ones.

Despite the many benefits, experts also point to some challenges arising from the emergence of smart cities such as data privacy, social equality in the access of technology, and preserving the natural and cultural heritage of a city.

SNPO says the government is proactively addressing this. For example, a new government outfit launched in April, the Cybersecurity Agency of Singapore, helps keep data secure and networks trustworthy, while a scheme by IDA to subsidise internet and telephone connections, as well as tablet devices for low income families, minimises cost-related barriers to accessing technology.

Public agencies such as the Ministry of Finance and IDA have also set up free public booths for citizens to access government online services - with staff on hand to help with any queries.

“Preserving our cultural heritage is important too,” notes SNPO, pointing to an effort by the Urban Redevelopment Authority (URA) to use drones to develop 3D models of conserved buildings and city areas.

These detailed studies are expected to guide restoration efforts and offer the public a deeper appreciation of Singapore’s built heritage, says URA.

Smart technology has also been harnessed to help the government and service providers enhance the well-being of citizens. For instance, the government is piloting one solution which retrofits public housing flats for the elderly with sensors to alert the inhabitant’s caregivers if they are inactive for a long time.

Senior citizens in these flats are also given portable panic buttons, which they can press for swift assistance. This trial was found to have been popular among residents, with many noting that it enhances the safety of the elderly, and gives their caregivers greater peace of mind.

FCL’s Berger notes that although the experiences of citizens are a key consideration of urban planning, the concept of a smart city is “very technocratic”, and oftentimes does not adequately integrate the needs of citizens.

Instead, FCL uses the term ‘responsive city,” which he says prioritises citizens. This involves consulting with them on urban development issues, and taking their concerns into account on development plans.

For example, it is a rule in Switzerland that before a building is built, developers must construct a scaffolding of the structure with the same dimensions and leave it on-site for several months to gather public feedback, shares Berger.

As Singapore pursues its Smart Nation vision, “it could also shift from a top-down approach to a more consultative one,” he suggests.

And as technology is embedded deeper into Singapore’s urban fabric, it is also important to provide green and natural spaces for people to gain some distance from the sensory overload that technology can sometimes result in, says Berger.

EDB’s Chee says the government is mindful of this, and that the Smart Nation effort is guided by one key question, that is: “What will improve the lives of Singaporeans?”

“Sometimes, agencies can get carried away in implementing new technologies that they see overseas, or that companies bring into Singapore,” he observes.

“As long as we make decisions on which technologies to adopt based on whether it can improve life in Singapore, a lot of the decisions we make will be the right ones.”

This story was first pubilshed in the Eco-Business magazine. Check it out here.