Are flying taxis the future of public transport in Singapore?

Battery-powered air taxis could be a common sight on the city-state's skyline by 2021.

Rather than sit in traffic or squeeze onto a train in the mornings, commuters in Singapore could soon be flying to work.

By as early as 2021, air taxis could be a common sight buzzing across the city-state’s skyline.

German aviation firm Volocopter, which launched the first public test flight of the Volocopter X2 over Marina Bay finance district earlier this month, has its sights set on becoming the Grab or Uber of Singapore’s skies.

A single trip in an air taxi is expected to cost around S$150 (US$110) per passenger, and the service will initially be marketed at business travellers and tourists. But Volocopter spokeswoman Helena Treek said the company’s ultimate aim was to make urban air travel affordable for all.

“Allowing anybody to fly over their city, is what drove our founders in the first place,” she told Eco-Business, adding that the price of a ride would fall once the service had reached scale. 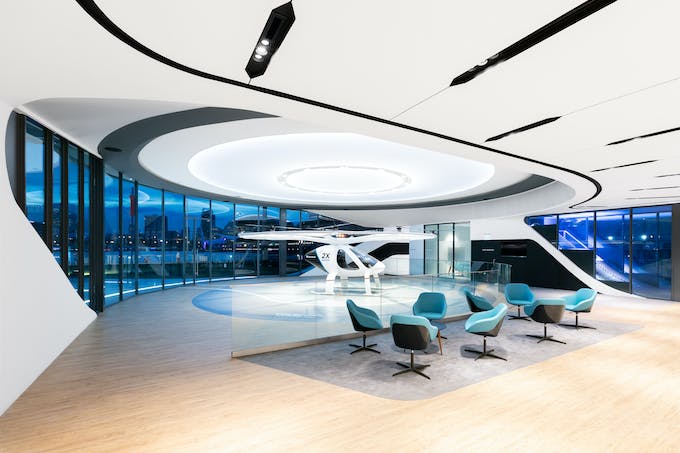 A VoloPort, the landing and takeoff point for a Volocopter, at Marina Bay. Image: Nikolay Kazakov for Volocopter

The air taxis are propelled by 18 rotors. They can reach speeds of 110km per hour and carry 200kg, the weight of two passengers with a small amount of luggage. Electrically powered, they contain nine swappable, lithium ion battery packs.

They can be flown by a pilot using a joystick, or remotely from the ground. Once the service has been commercialised, pending regulatory approval, Volocopters will be able to fly autonomously.

The firm is working with local authorities to secure landing and take-off points around the city. The first such site, known as a VoloPort, has been built in Marina Bay.

Though electric air taxis do not give off greenhouse gases during flight, mining and producing the electricity to power them does not come without environment cost. Sharing them and only using them for longer distance travel is the most sustainable way to use air taxis, according to scientists at the University of Michigan.