Zero emissions power is possible, and we know what it will cost

To avoid 2 degrees of climate change, global carbon emissions will need to be reduced by at least 50 per cent by 2050. For developed countries such as Australia with higher carbon emissions this will mean cuts closer to 80 per cent: it essentially implies decarbonising the stationary energy sector in Australia. Several studies have now tackled the question of how to achieve this, and despite different approaches and different assumptions they’ve come up with rather similar results.

The cost of changing

Previous studies from Beyond Zero Emissions and the Centre for Energy and Environmental Markets at UNSW report a range of between $100 and $173/MWh, depending on a range of technology-cost assumptions.

This week the Australian Energy Market Operator (AEMO) released their 100% Renewables Report, costing the system at between $111 and $133/MWh across four scenarios with different timelines and cost projections.

Each of the above studies has its own drawbacks and none can claim to be all-inclusive, but they all cost their 100% renewable systems at between $100 and $170/MWh. Current wholesale prices are around $60/MWh so this represents an increase of between $40 and $110/MWh.

For retail customers this is the same as an increase of between 4 and 11c/kWh. As most customers currently pay around 25c/kWh this would be an increase of roughly 16 to 45%, a modest number when we consider that retail energy prices have gone up by around 30% since 2008, due mainly to increased transmission and distribution costs.

There are two ways of presenting this result. First that the cost of producing energy will increase by up to a factor of 3. Or second that the increase is in line with the recent increases, which while unpleasant did not result in the end of the world for most of us.

How did they come up with that price?

The AEMO 100% Renewables Report identified the cheapest combination of technologies and locations needed to meet demand while taking into account transmission costs for linking it all together.

AEMO considered a broader range of technologies than the other studies and only outright rejects off-shore wind as too expensive compared to the alternatives. On-shore wind, solar photovoltaics and concentrating solar power with storage are all significant contributors, but wave power, hydro, biomass and biogas also play important roles.

Most interestingly the study comes out in favour of significant amounts of geothermal power), at least in the scenario with large and rapid global uptake of renewable technologies (and therefore larger decreases in costs). The previous studies only considered technologies that are already commercially available somewhere in the world; hot sedimentary aquifer technology is still very much in the developmental stage.This means there is large uncertainty on the future costs and whether or not this is truly a viable option.

But regardless of the uncertainty, the benefits of geothermal energy are significant – a zero emissions electricity source that can provide base load power. For this reason, despite the relatively high cost, the AEMO model finds cost worth the benefit of being able to manage additional variable renewables on the grid. 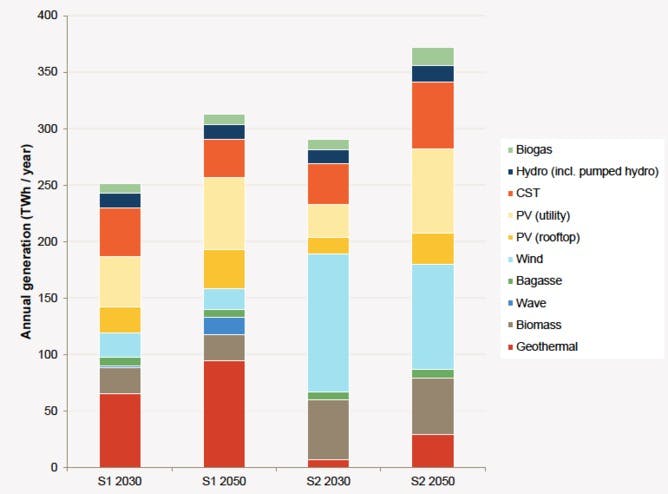 Figure 1: The mix of generation sources considered in the report. AEMO

The role of peak demand

Another key factor in the AEMO study is that it includes demand-side participation, where users of electricity have some incentive to shift their use to different times of the day to better suit when power is available. The model estimates that 10% of electrical energy use is flexible and can be shifted to other times of the day.

Figure 2 shows a shift of the peak demand from the late afternoon to the middle of the day, coinciding with the peak in rooftop solar output. This would mean that what we currently think of as off-peak would occur in the middle of the day rather than overnight. Using power overnight would in fact be discouraged by time of use pricing. 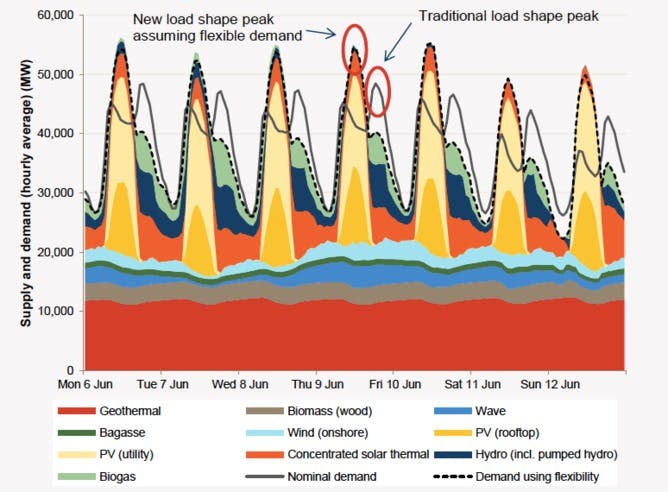 There are of course a range of caveats that come with the study. Increases in the cost of distribution resulting from lots of rooftop solar are not included. Nor are the costs of acquiring the land required. Also, importantly it assumes all the generation is built in the future when costs have come down rather than gradually from now which would incur larger costs.

There is still much work to be done to refine the modeling work. As I discussed in another Conversation piece, the study doesn’t do everything. It doesn’t do the transition from the current infrastructure and it doesn’t consider the likely scenario that some fossil fuel will persist, especially if carbon capture and storage becomes viable.

But one message is clear – going to a very high penetration of renewables is certainly not technically impossible, and will not be as expensive as we may have thought.