What does satellite data tell us about the Amazon fires?

According to data from Global Forest Watch, it looks like 2019 will be the third-highest year for Brazil's forest fires since 2010. Here are 5 things to note about the fires that have raged in the Amazon.

The thousands of fires burning in the Brazilian Amazon got global attention this week, both in the media and online, where the hashtag #prayforamazonia earned more than 150,000 mentions in one day. But what can satellite data tell us about what is really happening in Brazil’s forests?

1. This year is not on track to be record-breaking – but it is relatively high compared to recent years 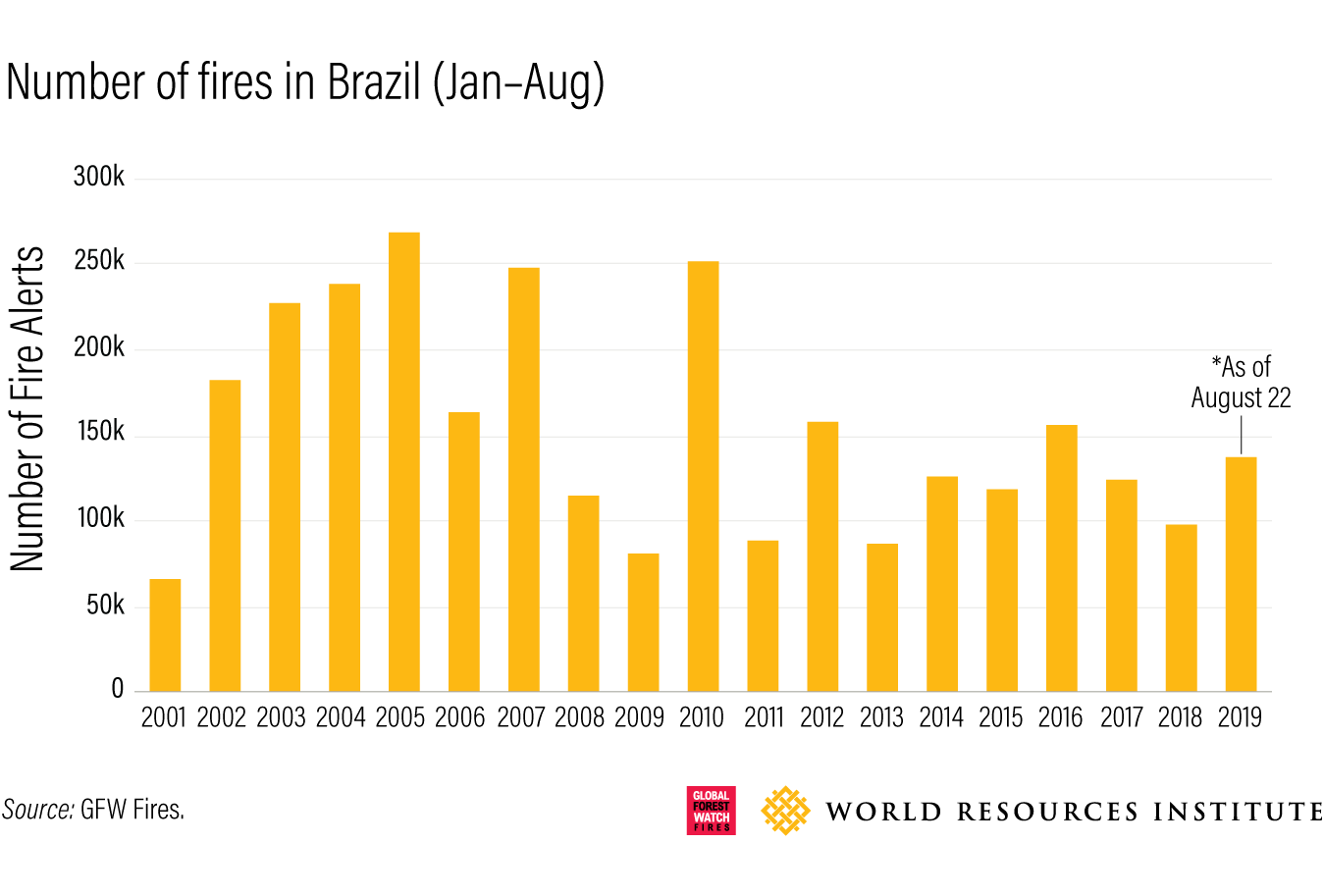 According to data from NASA, available on Global Forest Watch, Brazil had 39 per cent more fires between January and August 2019 than in the same period in 2018. However, the years with the most fires recorded were primarily in the early 2000s, probably linked to a high rate of agriculture-related deforestation in the Amazon at that time. This year’s fires are well below that level for the period January through August (though note that 2019 figures only include data through August 22). So far, 2019 is on track to be the third-highest year for fires since 2010.

2. The fire season is just getting started 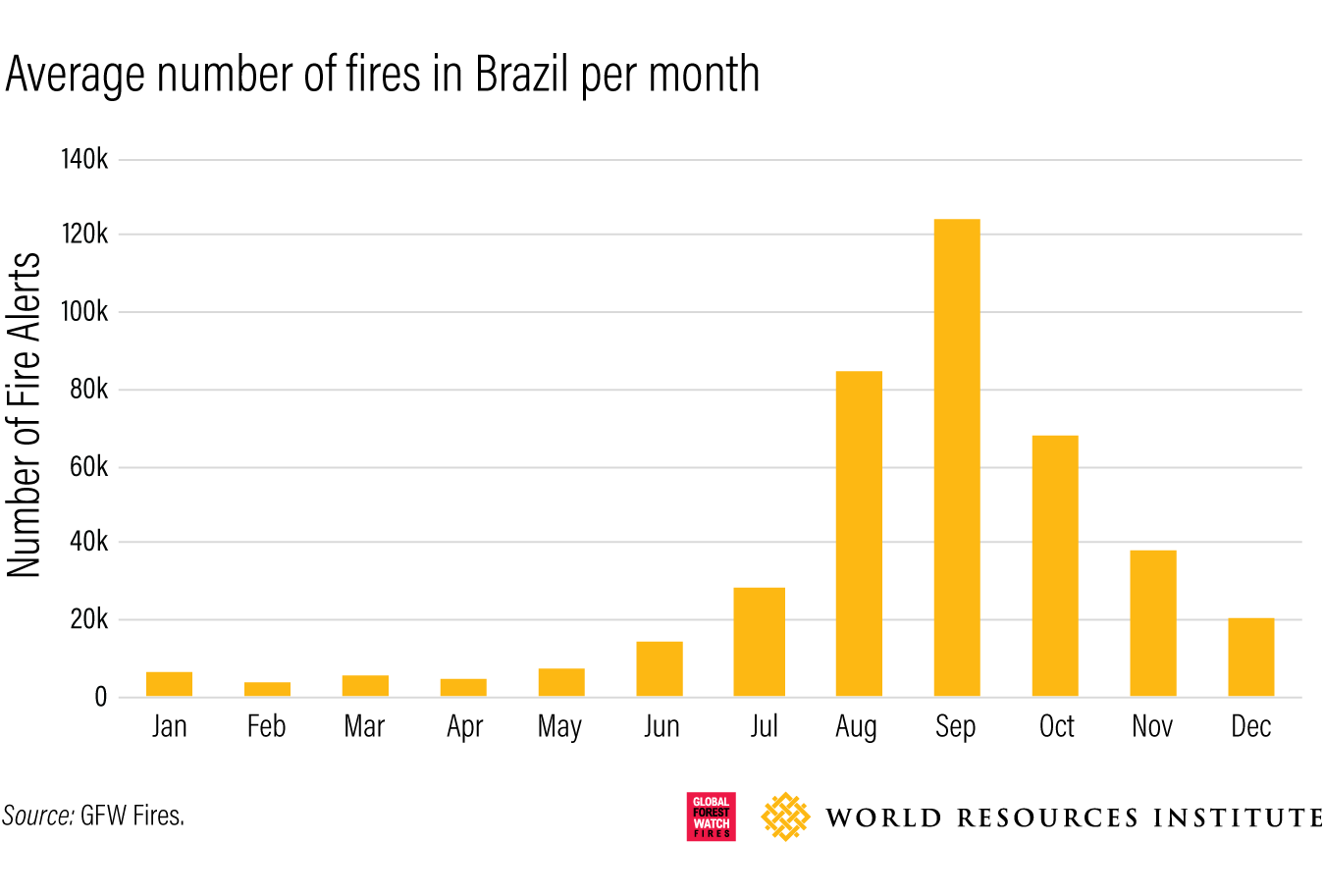 August marks only the beginning of the fire season in Brazil, with the most fires typically occurring in September. So far, 2019 has seen a fairly typical trend in the number of fire alerts for this time of year. But since an average of 62 per cent of the year’s fires happen from September onward, what really matters is what happens next. There’s still a chance to hit a record high or a record low, depending on the next couple of months.

3. Most of the fires are happening in the Amazon 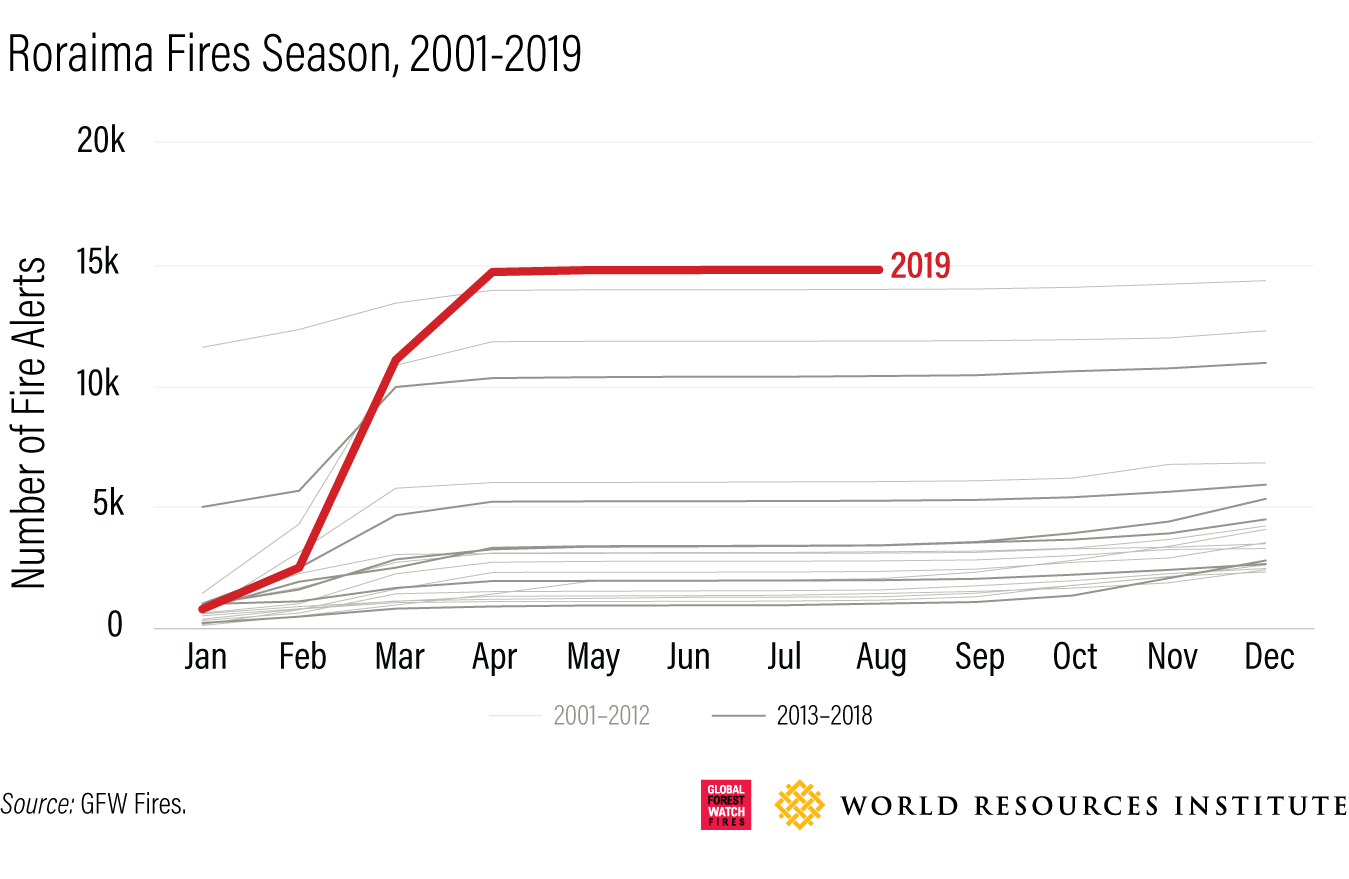 The states that have been hardest hit since the beginning of August are primarily clustered in the Amazon biome. Pará and Mato Grosso, along the agricultural frontier, have respectively had 66,400 and 54,800 fires detected in August, although these fires are not necessarily out of the ordinary for this time of year.

More alarming are those states that are approaching record levels of fire: Amazonas state is on track to have its second-worst fire season (after 2005), and Roraima, which faced a rash of fires between February and April, has already broken the state record for most fires detected in a single year.

Amazonas state is on track to have its second-worst fire season (after 2005), and Roraima, which faced a rash of fires between February and April, has already broken the state record for most fires detected in a single year.

4. Most fires are linked to human activity

Natural fires within the Amazon are quite rare, so any burning detected is typically the result of human activity. It appears that many of the fires in the Amazon are happening on land that was previously deforested, though we aren’t yet able to quantify this. Burning in cropland and pastures during the dry season is concerning as fires may catch in forests and savannahs and burn out of control.

5. Previous fire seasons have had major impacts on forests

We don’t know yet whether or how far these fires could spread into forests, but if they do, it could result in major impacts. Human activity combined with drought conditions in the Amazon in 2016 and 2017 resulted in record levels of damage to the forest canopy. Previous studies have also found that in some years, forest fires accounted for more than half of carbon emissions from the Brazilian Amazon.

To determine how much rainforest has been affected by runaway flames this year, we will have to wait until the smoke clears and the satellites are able to detect recent areas of forest change.

Satellite images show the before and after of a runaway fire in Roraima earlier this year. Many forest fires in the Amazon burn in the understory and kill off younger trees, resulting in the black and brown patches visible in the April image. Credit: Planet.

Brazil’s fire season is far from over, and what happens over the next two months is critical. Whether or not 2019 ends up as a record-breaking year, fires in the Amazon are an important topic with a potentially large impact both on Brazil and the world. Follow along with what’s happening on Global Forest Watch to see the latest trends.

Mikaela Weisse and Sarah Ruiz are from Global Forest Watch. This article was originally published on the WRI blog.