The biggest carbon dioxide sinks in Australia are at risk of collapse, based on the latest trends.

From rainforests to savannas, ecosystems on land absorb almost 30 per cent of the carbon dioxide human activities release into the atmosphere. These ecosystems are critical to stop the planet warming beyond 1.5 degrees Celsius this century – but climate change may be weakening their capacity to offset global emissions.

This is a key issue that OzFlux, a research network from Australia and Aotearoa New Zealand, has been investigating for the past 20 years. Over this time, we’ve identified which ecosystems absorb the most carbon, and have been learning how they respond to extreme weather and climate events such as drought, floods and bushfires.

The biggest absorbers of atmospheric carbon dioxide in Australia are savannas and temperate forests. But as the effects of climate change intensify, ecosystems such as these are at risk of reaching tipping points of collapse.

In our latest research paper, we look back at the two decades of OzFlux’s findings. So far, the ecosystems we studied are showing resilience by rapidly pivoting back to being carbon sinks after a disturbance. This can be seen, for example, in leaves growing back on trees soon after bushfire.

But how long will this resilience remain? As climate change pressures intensify, evidence suggests carbon sinks may lose their ability to bounce back from climate-related disasters. This reveals vital gaps in our knowledge.

Between 2011 and 2020, land-based ecosystems sequestered 11.2 billion tonnes, or 29 per cent, of global CO₂ emissions. To put this into perspective, that’s roughly similar to the amount China emitted in 2021.

OzFlux has enabled the first comprehensive assessment of Australia’s carbon budget from 1990 to 2011. This found Australia’s land-based ecosystems accumulate some 150 million tonnes of CO₂ each year on average – helping to offset national fossil fuel emissions by around one third. 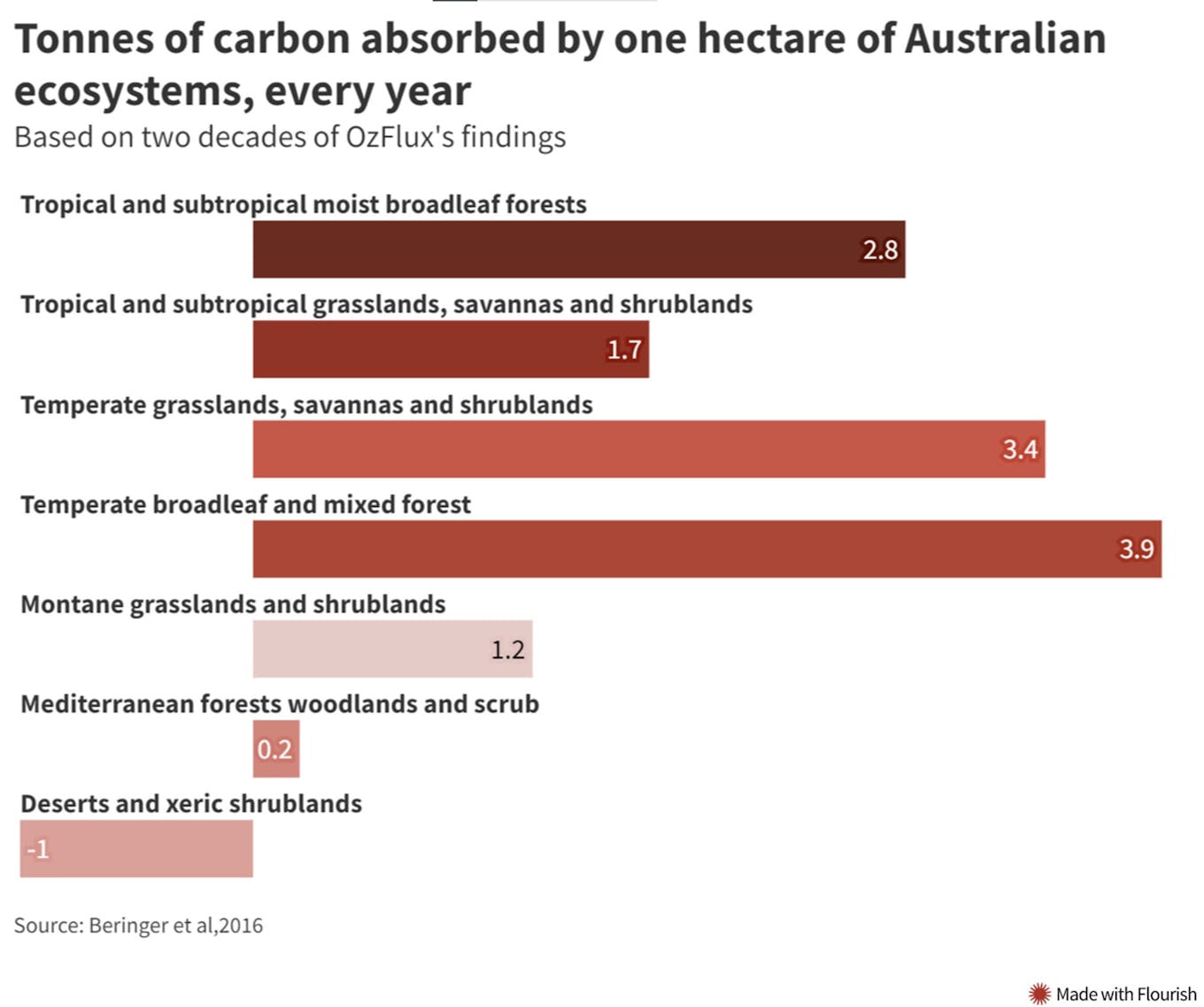 But it’s important to note that the amount of carbon Australian ecosystems can sequester fluctuates widely from one year to the next. This is due to, for instance, natural climate variability such as in La Niña or El Niño years, and disturbances such as fire and land use changes.

In any case, it’s clear these ecosystems will play an important role in Australia reaching its target of net-zero emissions by 2050. But how effective will they continue to be as the climate changes?

Extreme climate variability – flooding rains, droughts and heatwaves – along with bushfires and land clearing, can weaken these carbon sinks.

While many Australian ecosystems show resilience to these stresses, we found their recovery time may be shortening due to more frequent and extreme events, potentially compromising their long-term contribution towards offsetting emissions.

Take bushfire as an example. When it burns a forest, the carbon stored in the plants is released back into the atmosphere as smoke – so the ecosystem becomes a carbon source. Likewise, under drought or heatwave conditions, water available to the roots becomes depleted and limits photosynthesis, which can tip a forest’s carbon budget from being a sink to a carbon source.

If that drought or heatwave endures for a long time, or a bushfire returns before the forest has recovered, its ability to regain its carbon sink status is at risk.

Learning how carbon sinks may shift in Australia and New Zealand can have a global impact. Both countries are home to a broad range of climates – from the wet tropics, to the Mediterranean climate of southwest Australia, to the temperate climate in the southeast.

Our unique ecosystems have evolved to suit these diverse climates, which are underrepresented in the global network.

This means long-term ecosystem observatories – OzFlux, along with the Terrestrial Ecosystem Research Network – provide a vital natural laboratory for understanding ecosystems in this era of accelerating climate change.

Over its 20 years, OzFlux has made crucial contributions to the international understanding of climate change. A few of its major findings include:

Plans in Australia and New Zealand to reach net zero emissions by 2050 strongly depend on the ongoing ability for ecosystems to sequester emissions from industry, agriculture, transport and the electricity sectors.

While some management and technological innovations are underway to address this, such as in the agricultural sector, we need long-term measurements of carbon cycling to truly understand the limits of ecosystems and their risk of collapse.

Indeed, we’re already in uncharted territory under climate change. Weather extremes from heatwaves to heavy rainfall are becoming more frequent and intense. And CO₂ levels are more than 50 per cent higher than they were 200 years ago.

So while our ecosystems have remained a net sink over the last 20 years, it’s worth asking: