Understanding the source of emissions is integral to understanding and enabling further progress towards curbing emissions in Indonesia. Climate Watch Indonesia shares their findings to help the country meet their emission reduction goals.

Recently, toxic haze from forest fires in Sumatra and Kalimantan brought tremendous public health impacts to Indonesia. But events like these go beyond the present: they could accelerate the climate crisis in Indonesia in the long-run.

Indonesia is the world’s fourth-most populous country. It’s also the world’s fourth-largest emitter if you include land-use (as of 2014). To address climate change, Indonesia issued a Nationally Determined Contribution (NDC) that commits to reducing greenhouse gas emissions 29-41 per cent by 2030. Forest fires are just one of the threats the country must manage.

While the NDC has become a national target, the challenge is to translate this to the sub-national level, because local governments (such as provinces and districts) will be the ones tasked with achieving its directives across the country’s thousands of islands.

Understanding where emissions come from will be the key to understanding and enabling further progress towards cutting emissions.

Here are several key findings from the platform.

Forestry and energy have been the highest-emitting sectors since 2010, producing nearly 67 per cent and 22 per cent of total emissions respectively in 2014. Forestry sector emissions are associated with land conversion, forest fires, and peat decomposition; they tend to vary significantly year to year. Emissions from the energy sector are mainly generated by fuel combustion. The emissions from agriculture sector decreased by 6 per cent from 2010, while emissions from industry and waste increased gradually from year to year. 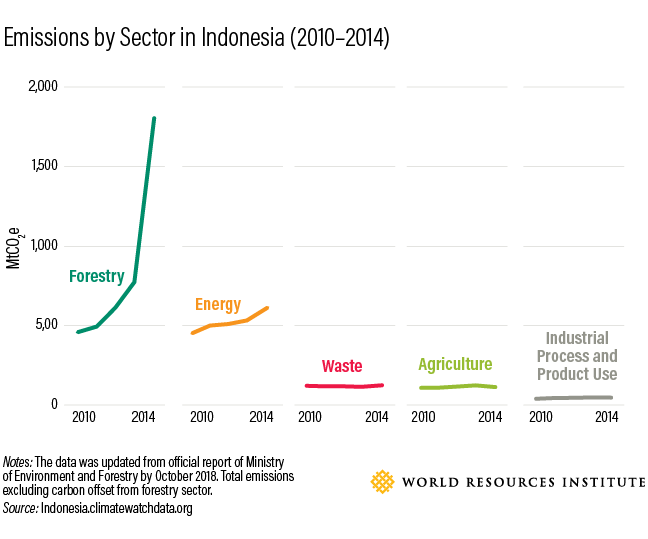 2. Three of the top 10 provincial emitters already missed their 2020 targets

However, some provinces are not on track to achieve these targets. East Java, Bengkulu and South Sulawesi, all of which experienced surging emissions over the past five years, have exceeded the targeted 2020 emissions threshold.

Forestry and energy have been the highest-emitting sectors since 2010, producing nearly 67 per cent and 22 per cent of total emissions respectively in 2014.

High industrial activity in East Java likely contributed to the rise of emissions in the province. Regional GDP almost doubled compared to its base year in 2010—and, as the industrial sector contributes nearly 30 per cent of the province’s income, emissions rose accordingly. 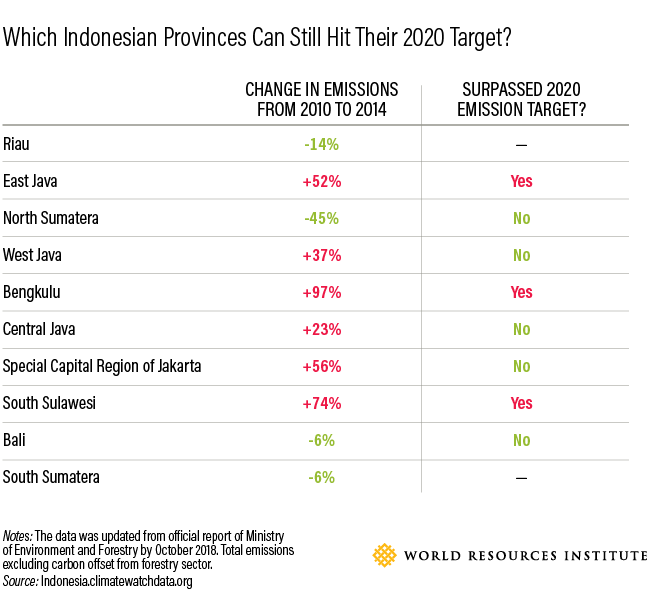 High emissions in Bengkulu and South Sulawesi are potentially driven by changes in land use; both areas are prone to deforestation. Bengkulu is also home to a large coal mining industry, and coal is one of its main export commodities, following rubber and palm oil. All these demands contribute significantly to the rise of emissions in Bengkulu.

South Sulawesi recently signed a Memorandum of Understanding with the Ministry of Development Planning (Bappenas) to implement a low-carbon development plan in the province. This commitment must still be translated into concrete mitigation actions and accompanied by stricter monitoring measures.

The other provinces have not exceeded their emissions threshold targets; however, it is not clear whether they are on track to achieve their targets by 2020.

3. Which provinces have the most carbon-intensive economies?

Emissions per unit GDP comprise a measure known as the carbon intensity of an economy. Lower readings indicate greater efficiency in economic output, at least as far as emissions are concerned. Service economies, for example, are generally less carbon-intensive than manufacturing.

Bengkulu and Riau have the most carbon-intensive economies amongst Indonesia’s 34 provinces. Both are driven by high-carbon activities, especially exploitation in the land-use sector. Currently, they are also suffering from forest fires, which drastically amplify emissions.

The economy in Riau has been driven by growth in the land-based sector, which includes the paper and oil palm industries, as well as more traditional industries like mining, excavation and manufacturing. However, lack of forest and land use governance allowed forest and peat fires. The fires resulted in local people experiencing respiratory ailments due to poor air quality.

Similar to Riau, Bengkulu province relies more on land-based sector. But despite the big contribution from key plantation commodities, Bengkulu is listed as the fifth-lowest province in emissions intensity after North Maluku, Gorontalo, West Sulawesi and Maluku. When an imbalance occurs between economic benefit and social wellbeing, relying further on the land-based sector can bring additional scarcity to the existing resources. 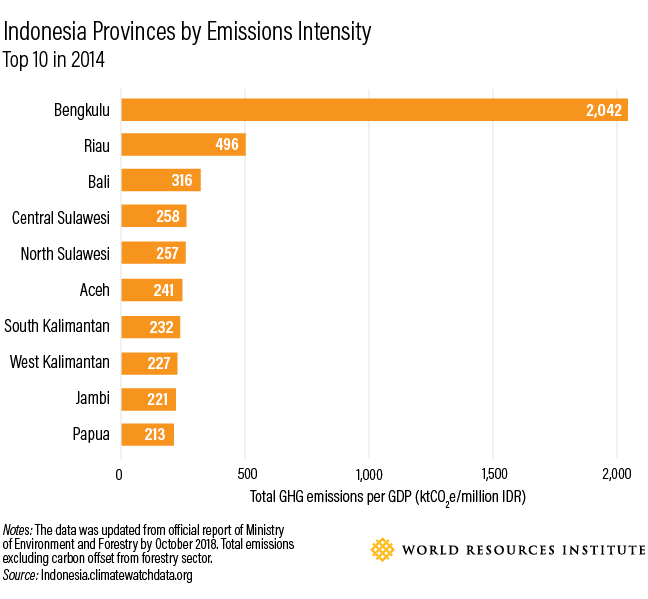 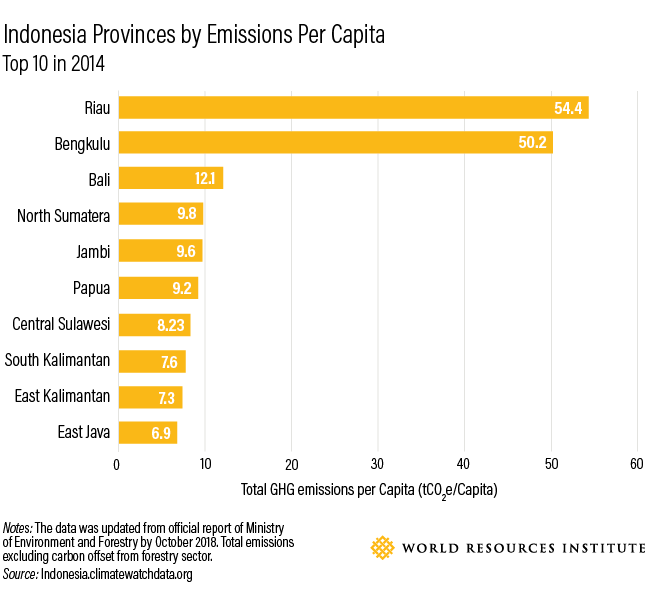 Under the national climate pledge of NDC, Indonesia’s 34 provinces will be largely responsible for reducing emissions. That means that from this point onwards, sustainable development practice needs to be translated to the provincial level to ensure high-carbon activities are short-lived.

As the Indonesia government prepares to translate climate action to the local level, Climate Watch Indonesia’s resources can benefit provinces by providing current emissions status and sectoral profiles at the provincial levels, informing the design of strategic, low-carbon development plans and their implementation.

Moreover, as a developing country, it is pivotal for Indonesia to ensure that its climate commitments are in line with its development priorities. To that end, Climate Watch Indonesia identifies linkages of climate data with development policies—in turn building a stronger narrative for green growth development and beyond.

By harnessing Climate Watch Indonesia data to improve their understanding of emissions, decision-makers and other relevant actors can find solutions for preserving the environment while encouraging economic growth and social prosperity.

Hanny is the Forest and Climate Program Officer at WRI Indonesia. This article was published on the WRI blog.