'The Greening of Asia': Some good news, finally

[Book Review] Through case studies, personality profiles and abundant statistics, Mark Clifford’s latest book offers some optimism about the state of our environment.

From Beijing’s “crazy bad” air which is smoggy on most days of the year to the illegal logging of pristine tropical forests in Indonesia and the toxic waste spewed by India’s massive cement industry, there is no lack of examples when it comes to the environmental challenges faced by Asia.

Not only is the continent home to 60 per cent of the planet’s population - whose demand for everything from cars to rice will only increase as the region gets richer – it also needs to lift millions of people out of dire poverty and provide them access to electricity and safe drinking water.

Answering these needs will only lead to further strain on resources – water, food and fuel. But no matter how dire things may seem, Mark Clifford argues in his latest book, The Greening of Asia, that humanity should not despair. 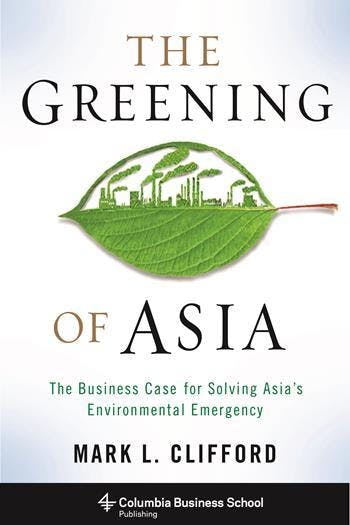 This is because the region’s environmental challenges are being tackled with ingenuity across countries, diverse industries and geographies, and with impressive results.

Indeed, sounding optimistic through much of the book, Clifford believes that solutions already exist to address Asia’s massive environmental problems.

Most of them involve thinking about the problems in economic terms. He makes the case that sustainable business not only reduces pollution, but also makes money – by establishing progressive green firms, encouraging technology innovation and slashing red tape.

Rather than adopt the “get dirty, get rich, get clean” strategy, Asia will be far better served if it thought about the sustainability from the get-go, he believes.

Conversely, a failure to fight climate change, pollution and environmental degradation will jeopardise the region’s prospects for prosperity in the coming decades. This is the central point of his book.

Clifford’s thesis is formed on the back of 25 years of experience as a writer and editor in Asia for publications such as South China Morning Post, BusinessWeek, and Far Eastern Economic Review. He has seen first-hand many of the examples that he includes in his book and personally spoken to many of the business, government and civic society leaders he cites.

Currently executive director of the Hong Kong-based Asia Business Council, Clifford spends his time talking to these same people about issues that affect businesses in Asia.

The book therefore works well as a grand overview of the key industries in Asia such as property, heavy equipment manufacturers, that have contributed to the stellar growth of the region over the past few decades and which should also now take part in its “cleaning up”.

Mark Clifford, author of “The Greening of Asia” 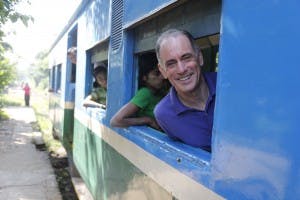 The Greening of Asia is an easy read and is filled with anecdotes that make the stories come alive. They range from the humorous and light-hearted, to the sobering to the downright horrifying, and serve as a reminder that the region is complex, multi-faceted and needs solutions that are as diverse.

It is also even-handed and fair in taking into account the different stages of development through the region from rich, densely-packed Singapore to still largely agriculture-dependent Indonesia, and proposes different solutions to particular challenges.

Backing up his optimism with statistics, Clifford says that 22 per cent of India’s IT giant Infosys’ power already comes from renewable sources, and the company is aiming for 50 per cent in the near future.

Hong Kong’s Swire Properties’ energy consumption dropped by 11 per cent in 2012 even though its property portfolio grew 7 per cent; and Manila Water provides cheaper water to more than three times the people that the government served before water provision was privatised.

But going beyond citing examples, Clifford is able to place them in the broader context of Asia’s complex blend of political and economic influences. Because Asia’s business landscape is dominated by state-owned firms, therefore these ties are often intertwined.

But the strong hand of the government in many countries in Asia also means that even if private sector companies do have innovative solutions – like electric-car makers Reva in India and BYD in China – there is a limit to what they can do if they lack government backing.

Therefore, for all of Clifford’s optimism, he may have underestimated the obstacles that innovative upstarts need to overcome, especially unfriendly government policies. And for every firm that succeeds in bringing to market a product or service that helps in enhancing sustainability in the region, many others have failed.

Overall, the book is maybe just what we need: Not a preachy or doom-mongering tome, but one with a message of pragmatic optimism.

Solutions can be found and already exist in some cases but companies, governments and pretty much everyone else have to be on board to address the environmental problem as it’s a big task.

In a postscript, Clifford says: “Good environmental policies, motivated companies and effective civil society groups are key to a greener, cleaner and richer Asia.” He’s right in seeing the collective effort that’s needed to address the issue and one can’t help but be swept along by his vision - that we humanity might just be able to turn the situation around, if we start doing something now.