Surviving extreme heat in the slums

How people in low-income communities are coping with heating cities could set the example for future heat-stressed citizens to follow.

As the world’s cities and towns heat up, authorities and governments often tell people to shelter indoors or use active cooling like electric fans or air conditioners.

But how do you follow this advice when your home is made of scrap metal and wood, your access to electricity averages around four hours per day, or your modest income is already spent on food and simply can’t be extended to cooling?

By 2050, more than one billion people, including those living in some of the poorest parts of the planet, could face extreme heat stress unlike anyone in recorded human history. Experts, along with the Intergovernmental Panel on Climate Change are asking: how will these populations adapt?

An international team of anthropologists, geographers, engineers, urban planners, architects and epidemiologists are finding some answers by studying how people are coping with hot conditions in Karachi, Jakarta, Hyderabad, and Douala. In these cities, many people effectively live ‘off-grid’ with unreliable access to quality housing, water, electricity, shelter and shade. The pandemic only left them more confined, forced to deal with heat-related illness, even during periods of cooler weather.

In a survey of 4,564 low-income residents, only seven people reported having or using an air conditioning unit; and only 34 per cent of respondents reported using an electric fan as their primary cooling method when it was hot. Some 40 per cent of all respondents had less than 12 hours of electricity per day. The lack of readily available water, which in some cases was further reduced during Covid-19 measures, was also closely correlated with symptoms of heat related illness, such as blurred vision.

How they coped could set the example for future heat-stressed citizens to follow, from obvious, well documented practices, like increasing airflow or ventilation, to using incidental shade provided by street trees or urban infrastructure like flyovers.

Other informal strategies included visiting neighbours or relatives and using water, not for hydration, but bathing and wetting down the interior surfaces of homes. Many of these practices are rarely present in urban heat-action plans developed by city authorities or governments.

These cooling strategies don’t occur in a vacuum. They are enabled by a range of social, cultural, technical and economic structures that make them possible or permissible. For example, women often have less access to shade and cooler public places due to cultural norms and safety concerns about being outside, particularly when high-density informal housing means ‘outside’ is a public domain.

Water is used very differently in response to heat across Karachi, Jakarta, Hyderabad, and Douala. Bathing was the most common strategy in the Pakistani city of Karachi (used by about a fifth of the population), yet not mentioned at all in the Indian city of Hyderabad — pointing to the need to carefully consider resource availability and cultural norms for how water is used. 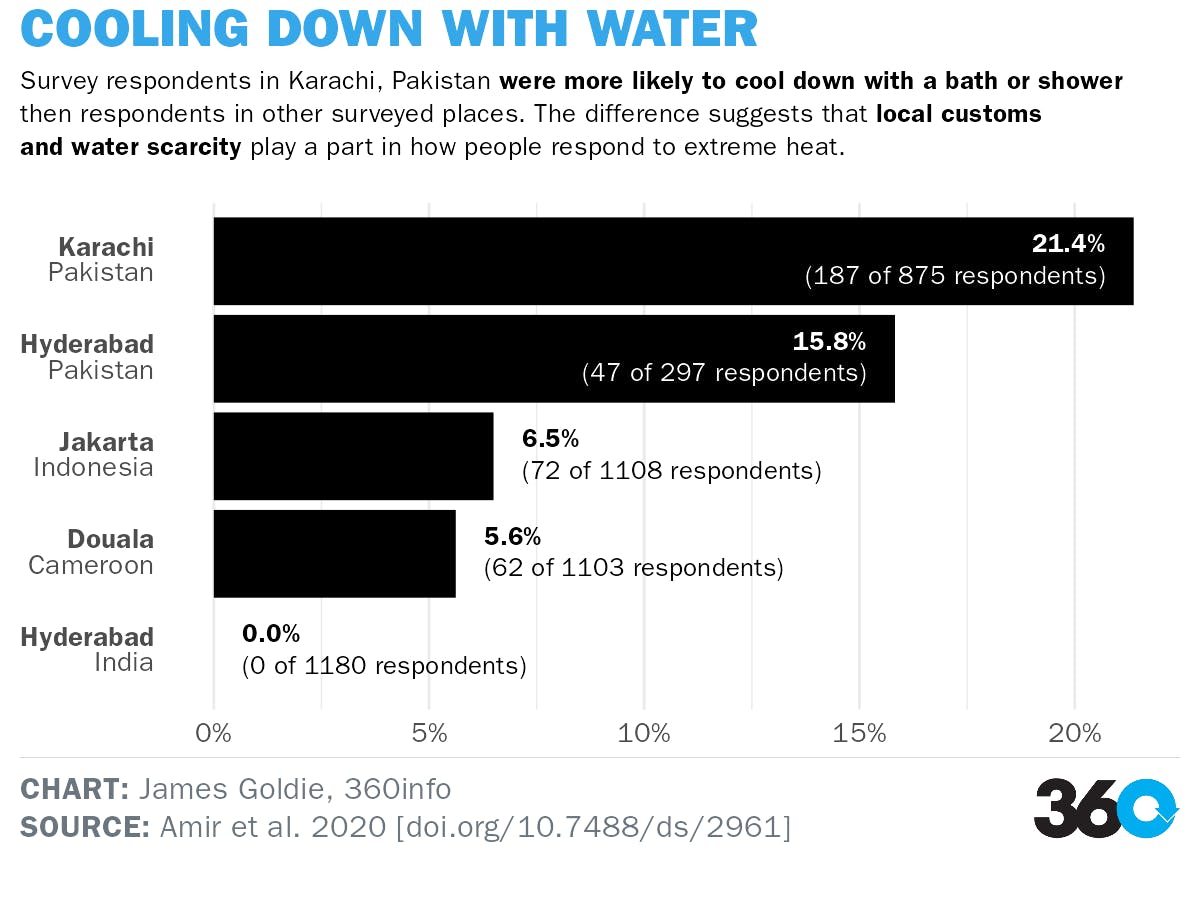 Policymakers can identify, recognise and assist low-tech, energy-efficient and water-efficient strategies already being used across low-income communities. Some of these can be supported through tweaks informed by the latest science —  for example, considering when using a fan helps, when it hinders heat loss, and when small amounts of water or ice can help effectively cool homes and bodies.

There is an assumption that basic access to electricity, water, and shelter is always available — they aren’t. Policy focus should not only be on the emergency provision of water, electricity and shelter during extreme heat events. This is a very expensive band-aid for an arterial bleed. Extreme heat is not only a short-term event — in the global tropics, populations are also exposed seasonally, or all year-round. Ensuring basic access to water, power and shelter all the time — or at least much more of it — is crucial.

In rapidly developing parts of the world, policies that assume a standardised built environment, occupied by geographically stable, atomistic households with reliable incomes don’t reflect reality. They also overlook opportunities for novel solutions to managing heat in a warming world. For example, informal electricity connections (either directly to the grid, or via a neighbour) have played a crucial role in providing energy and reducing heat stress for the lowest income groups. Rather than malign ‘illegal connections’, city authorities need to support community connections that maintain safety while providing flexible access.

Low-tech interventions are not a panacea to climate change. The shade of a tree, appropriate use of fans, or improved ventilation of homes only works as long as outdoor conditions remain survivable. This might not be the case in many regions by 2050.

We can still feasibly protect the global poor from the heat at the current 1-1.5°C limit, but not so at 2°C when temperatures will become too much for the human body to bear. Staying under 1.5°C means low-tech responses have a higher chance of working. Beyond that, their efficacy drops off rapidly.

Adapting to extreme heat isn’t new — communities have a range of localised responses that are deeply embedded in their social and cultural circumstances. Paying attention to everyday strategies is a foundation stone for reducing heat-health risk now and in the future. But it’s a foundation on unstable ground — only limiting warming to 1.5°C will give the house a chance of standing.

Professor Jamie Cross is Chair of Social and Economic Anthropology at the University of Edinburgh, and Director of the Edinburgh Earth Initiative.

This research was funded by UK Research and Innovation and the Global Challenges Research Fund through the Economic and Social Research Council, with support from the Scottish Funding Council, as part of Cool Infrastructures, a multi-disciplinary project into life with heat in global cities.