As Pride month comes around each year, companies add a rainbow-coloured filter to their logos to show their support for the LGBTQ+ community. How do we distinguish the companies that aren't walking the talk?

June is Pride month, celebrating the LGBTQ+ community, which means you’ve probably noticed your favourite brands adding a rainbow-coloured filter to their logos – communicating their support for the movement.

We hold great appreciation for companies that are waking up to the need for diversity and inclusion, but as is the case with the majority of sustainability-related topics that look great on a newsfeed, we’re cautious of those companies that don’t walk the talk.

Sadly, a recent report found that such an issue went as far as companies marketing rainbow logos, while contributing to United States (US) anti-LGBTQ+ bills. For example, AT&T jumped on the rainbow marketing trend while sponsoring politicians advocating anti-trans legislation in Arkansas, Tennessee, North Carolina, Texas, and Florida at the very same time.

What is usually misunderstood is that the LGBTQ+ community are not demanding additional privileges, but merely equal treatment. And as identities and sexualities become ever more diverse, it’s unsurprising that the societal tenor is pushing companies to stop judging employees or job applicants based on such criteria. Even Wall Street seems to recognise this, having brought several LGBTQ ETFs to the market this month.

What does the data tell us? 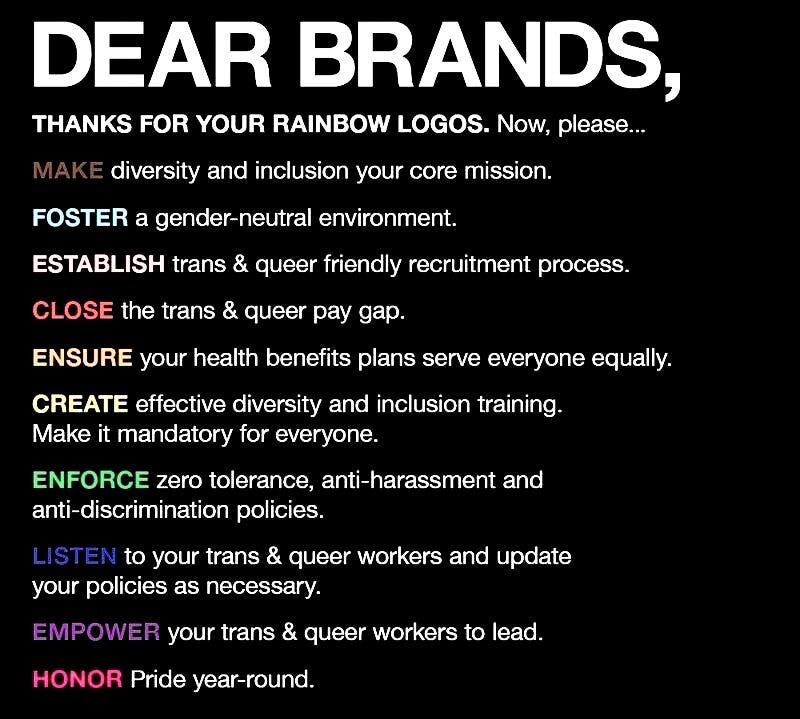 A guide of how brands can avoid rainbow-washing. Image: LinkedIn

Political donations are often not captured in ESG scoring methodologies, so we looked at human-rights advocate, HRC’s congressional scorecard to identify the top three companies that donated the most to the cause of anti-LGTBQ+ federal legislation in the US.

At the top of the not-so-glamorous ranking is Comcast, the US telecoms company. Unsurprisingly, Comcast scores in the bottom 42 per cent of Arabesque S-Ray’s UN Global Compact (GC) Score – an aggregated sustainability performance evaluation along the four core themes of the GC initiative (Environment, Anti-corruption, Human and Labour Rights).

However, the enormous donations by AT&T and Home Depot, ranking second and third respectively, appear to not be reflected in S-Ray’s GC Score with both ranking in the top 70 per cent of all companies. Taking a closer look at AT&T, the company scores 50/100* on the Diversity sub-category and scores in the high 70s in Human Rights sub-category—there’s a lot of distorted messages here.

What can we do?

We’ve all had a tough year so the last thing we need is more pessimism and hate. You may not believe it, but homosexuality is still a criminal offence in many countries. Rather than fighting hate with hate, how about just sharing John Oliver’s video on the topic?

If believing in love despite different backgrounds, race or orientation makes us liberal snowflakes, let it be so. In the meantime, enjoy the Pride!